Regarded as a smaller, sleepier version of Siem Reap, Battambang is same-but-different: beautifully preserved French architecture, a river running through it, a young and growing arts scene, NGOs and social enterprises galore. It is also all about the kids.

This is a collection from a local photographer that captures the spirit of Cambodia’s children. They are precious, open and curious about foreigners. “Hello”, they call out, waving and giggling. These little faces are everywhere; many of the kids  are with their parents or on their way home from school. These are the lucky ones.

We’ve also seen kids whose childhoods may have already flickered out, and they break our hearts.  We were on the bamboo train ride which deposits tourists in a small village for 20 minutes before the return trip back.  Upon arrival, one young girl grabbed Stephen, the other one got me, and so it began: “hello, what’s your name, please buy a bracelet.” I immediately forgot the rules (don’t buy from children, as it discourages them from going to school ), and bought two bracelets.

These girls were cagey about school when we asked, but they spoke some English and seemed bright, so we hoped they were still attending. We bought their bracelets, took our souvenir photo and felt a little uneasy, about them and ourselves. Their lives revolve around tourists and money – when the bamboo train stops running next year, they have no Plan B. Actually, they have no plan at all.

Which brings us to our tuk-tuk driver, Peter. He met us at the bus station and brought us to our hotel. He is bright, charming and sold us one of his  tours for the next day that showcase “the real Cambodia.”

He was quite open with us and over a few hours, his story came out. He is 25, comes from a large family in rural northern Cambodia and left home at 19 to go to Phnom Penh to look for work, where he missed his family and “cried a lot.” He moved to Battambang to live with his brother; they are both tuk-tuk drivers, but want more for themselves. It is hard to find work in Cambodia that pays a reasonable wage – at the low end, many people earn a dollar or two a day. His English is okay, but he knows it needs work if he is to become a licensed tour guide or improve his lot in life.

He took us on a tour of the countryside and as promised, we saw the rural Cambodia.  The trip began with a ride on the bamboo train, called a norry. After the Khmer Rouge left the transport system in complete disrepair, Cambodians developed this rudimentary system for transporting people and goods. At first, they operated by using poles and muscle but now they have small motors, and the trains are largely used for the tourists.

With a proper railway due to come back in the next year, this quirky little ride’s days seem numbered. It’s 20 minutes to the village, 20 minutes there and 20 minutes back.

Decidedly bumpy (some mismatched rails), it felt speedier than it probably was – this is a train ride we are unlikely to experience ever again.

Luckily the track is arrow-straight, because when trains coming from opposite directions meet up, both drivers stop and choose one train’s passengers to disembark. The drivers lift the train to one side (seating area, motor and wheels), allow the other train to go by, and then reassemble the other train. It all takes about a minute, and is typically done 5-6 times during one journey.

Peter then took us out into the countryside to meet a few families and watch their food production. At our first stop everyone in the family works, from teenagers to grandmothers, making sweet cakes to sell to the markets. They are up early in the morning and work very hard all day. Their cakes are baked, convection-style, stacked in underneath a roaring fire.

Next, we stopped by a home that makes rice papers  for spring rolls. These girls had a system down – two papers at a time on the grill, which were flipped onto the wooden rods and flipped over onto the drying rack. They typically  make 2000 a day!

The next enterprise was a little more borderline. The owner ran a cockfighting operation until the police shut that down. He still runs fish-fighting – we saw big jars of fish, but Peter’s English was not good enough to explain how fish actually fight. A rice wine distillery is his other revenue stream, and I was tempted to try a taste from the big sample jar, but saner heads (Stephen’s) prevailed. There were a number of scorpions steeping in the wine, reputedly for “strong blood” (virility), but the odds of being poisoned was not worth the risk.

I loved this lady. She makes sticky rice and black bean confections which are stuffed into bamboo tubes and cooked over a fire. Once cooled, they are stacked on a table for sale. We bought one, and Peter showed us how to peel it back to reveal the rice. This lady swung in a hammock the entire time, chatting on her phone – seen one foreigner too many, probably.

We crossed over this extremely dodgy bamboo bridge. As you can see, the river is very low, but in the rainy season, this bridge is swept away, as the water floods the banks. If ever I felt like an old lady, it was then, holding on for dear life to the main pole while trying to balance myself. There are days when blind faith  is all we’re going on. 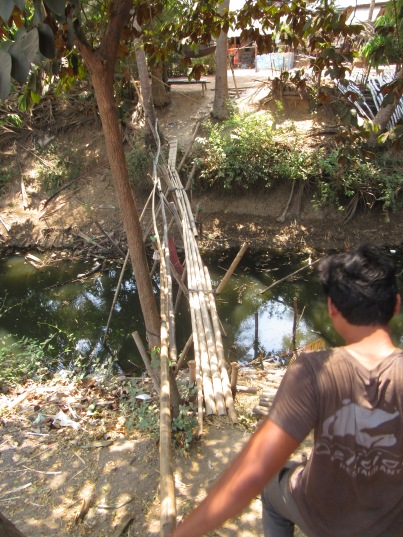 Then, then gut-wrenching part of this tour – Wat Sarong Knong and the Well of Sorrows. When Peter first told us the Killing Fields would be part of the tour, I was puzzled. I thought the Killing Fields were near Phnom Penh. Peter’s turn to be puzzled, ” The killing fields are in many places.” 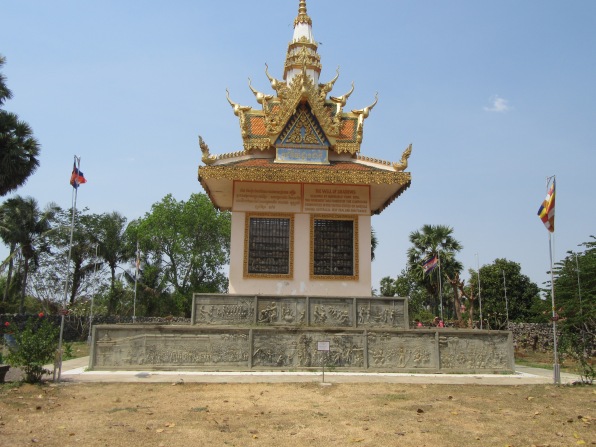 The wat was seized during the Pol Pot regime and turned into a prison. The stupa holds some of the skulls and bones of the estimated 10,000 victims who were interrogated, tortured and murdered here.  All four sides are engraved with torture scenes, including spearing babies in front of their parents and gang-raping women – each scene more brutal than the last.

How do you read about this and look at these depictions of torture and see the piles of skulls and even begin to understand the scale of it all? I just finished reading First They Killed My Father by Loung Ung, a Cambodian survivor who was five years old when the Khmer Rouge forced her and her family out of Phnom Penh. Angelina Jolie produced the movie and was recently in Cambodia for its premiere.  It is a harrowing read; all the more so for being in the country and seeing the after-effects all these years later.

Peter frequently mentioned the Khmer Rouge and the effects that are being felt to this day. He was a little more circumspect when talking about the current government – he looked around and lowered his voice,”you don’t know who is listening.” Pol Pot terrorized and slaughtered its citizens. The current government does not appear to have the best interest of all its citizens at heart. Poor Cambodians – they have such a lot to deal with and while we don’t know their internal struggles, they are outwardly calm, sweet-natured and patient.

Switching from a time of starvation to present-day Cambodian markets.

No secret that the storage and handling of meat, chicken and fish leaves a lot to be desired, but there were a few food items for sale that had me rethinking my meat habit.

This is the “chicken with flies” special.

Frog’s legs are a delicacy, but not after we saw these guys alive and hopping in the street. 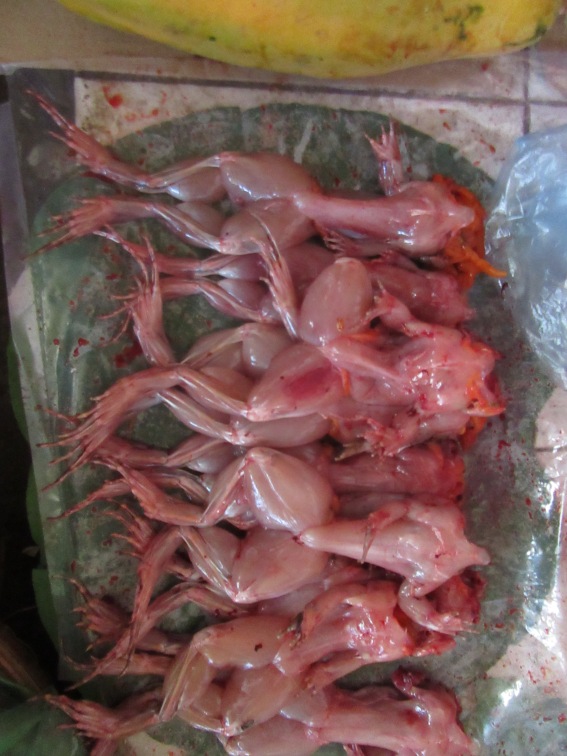 I defy Anthony Bourdain to endorse these – chicken embryos cooked and ready to eat.

Moving from the deeply sad and the seriously gross, we will take you to the magic of the circus.
Phare Ponleau Selpak, meaning The Brightness of the Arts are so much more than a circus. Sprung out of Thai refugee camps in 1986,  a foundation was formed to help young people express their recent traumas through the arts.

The organization provides training in dance, visual art, circus, theatre, music, graphic design and animation to vulnerable young people; over 1000 students currently attend the school for free. Many of them go on to perform around the world.

The circus performances, both in Battambang and Siem Reap, tell stories through live music, dance, juggling, aerial arts, fire twirling and overall goofiness. We watched the show under the Big Top – it was an enthralling show.

We could have stayed another day or two in this area – Battambang is a city that sneaks up on you. On to Phnom Penh…