Number 214. The Continental Hotel, Saigon. This is the room Graham Greene stayed in while he wrote his epic novel, The Quiet American, about American involvement during the demise of French colonialism in Vietnam in the 1950s.

And this is the Continental Hotel – I can imagine Greene parked at a corner table, drinking and writing. The hotel’s history is brought to life through photos and datelines, in an exhibit down one hallway off the lobby. The Continental does not appear to have been updated much. It is Saigon’s first hotel, and the luxury hotels since then are far grander and more well-appointed. But this hotel has such interesting ghosts! 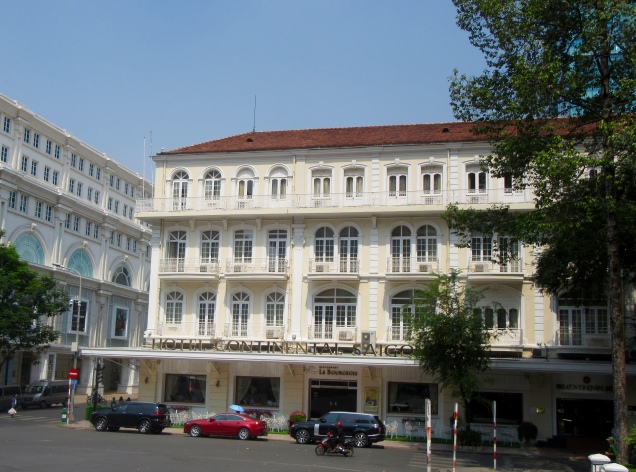 From The Quiet American to The American War of Aggression, Vietnam’s history of oppressors has left an indelible mark in Saigon.  You can’t visit here (or you shouldn’t) without seeing the War Remnants Museum and Reunification Palace.

We began with the Reunification Palace. The Vietnam War was such a strong marker of our youth; imprinted even more throughly by the books and movies that followed. A stroll through the Palace was deja vu all over again. The tanks crashed through the gates on April 30, 1975, the day Saigon surrendered, and everything in the Palace looks exactly as it did on that date. We strolled through two floors of rooms, frozen in 60s limbo – drawing rooms, the President’s office, dining rooms.  I recognized the teak furniture and the scratchy yellow and brown upholstery from my childhood.

Then we went to the bunker, where the President and his family lived towards the end, and where the command post was secreted away, complete with maps and phones.

That visit was a trip down memory lane, but it was a whole other story with the War Remnants Museum (once known as the Museum of Chinese and American War Crimes).

It is no secret that the American War was a disaster that cost billions of dollars, millions of lives and millions more ruined, but the most gruesome part of this museum was the section devoted to Agent Orange and its ongoing effects. Originally used by the Americans as a defoliating agent to make detection of the enemy easier, the secondary effects were devastating beyond anyone’s imaginings.

We walked through one exhibit hall of hundreds of photos of malformed fetuses, conjoined twins, children born without limbs, horribly disfiguring facial features, mental retardation, blindness and skin diseases. We could not bear to walk through the whole thing, but the most horrifying aspect of Agent Orange is that it did not disappear with the first generation. The chemicals appear to have become part of each victim’s DNA, so that children, grandchildren and great-grandchildren are still being born with significant deformities. Forty + years later and the effects of Agent Orange aren’t over yet.

Another hall showcased the great photojournalists of the day – Larry Burrows, Robert Capa, etc. – who died while documenting the war. Many of the photos are iconic; all of them are extremely poignant.

These great photojournalists captured such emotion -the viewer feels the fear of those children. 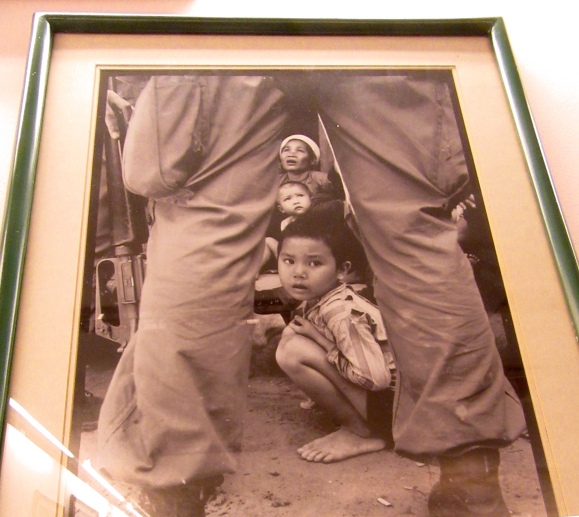 The section  of war crimes on unarmed women, children and the elderly  was stomach-turning. The My Lai Massacre is well-known and so is the attack led by Lieutenant Bob Kerrey, who confessed to those crimes decades later (as a U.S. Senator). 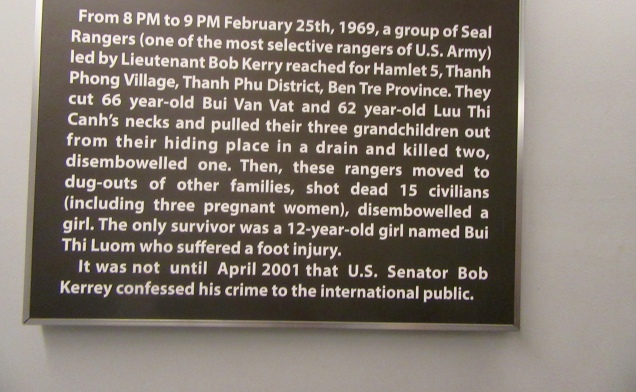 The Fine Arts Museum is a refreshing antidote to the heaviness of the War Remnants Museum. It is a stunning colonial building, whose architectural details alone are worth checking out ( old wooden lift, wrought iron everywhere, stained glass, soaring ceilings), but much of the art is contemporary and has war influences. 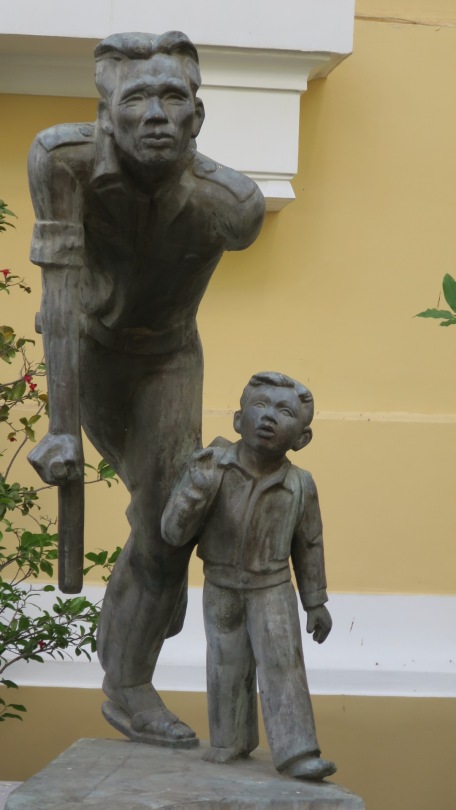 And now for some random Saigon moments. I will begin with some Stephen silliness to change the mood. Lisa took us to the Russian Market and if you are a fan of Nike, Adidas, North Face or Under Armour, this place would put you in a cold sweat.  Under Armour T-shirt = $8 CAD, three-season North Face down jacket = $35 CAD. These are not knockoffs – they are made in Vietnam, and that is the “firm price.” Lisa and I made Stephen buy a shirt, and with his requisite purchase in hand, it was time to entertain the ladies. 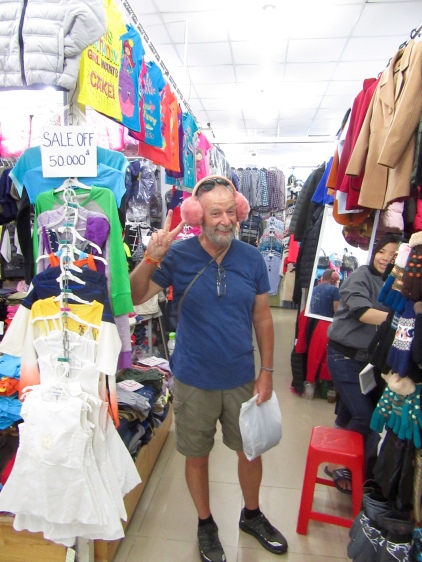 After our shopping excursion, we walked through the neighbourhood of modest apartments, alleys and pho stands. We were reminded of how sometimes we only see the outer layer of life as we walk by. Stephen spied a picturesque clothesline and backdrop outside a window,  and as he was aiming his camera to take a second shot, a woman’s face appeared and she threw a glass of water down on him. It was only when he looked at the photos later that he saw why she might have felt invaded.

Alleys add to the mystery of Saigon – so little revealed from the street, but they are the arterial flow of the city. People live there, work there, have businesses – you just have to walk down one to discover a whole other side of the city.

On our last day in Saigon, we visited the Botanical Garden. The garden is a lush hideaway from the city, with a butterfly garden, orchid garden and many bonsai. The downside to the garden is it is ringed with a sad zoo – giant squirrels imprisoned in giant birdcages, demented gibbons hopping about in domed cages the size of an average suburban bedroom and a couple of hyenas sleeping on concrete  – I couldn’t look any further.   We did see lovely birds though – we think this is a giant ibis. Whatever it is, it is the size of a nine-year-old kid – this is a very big bird. 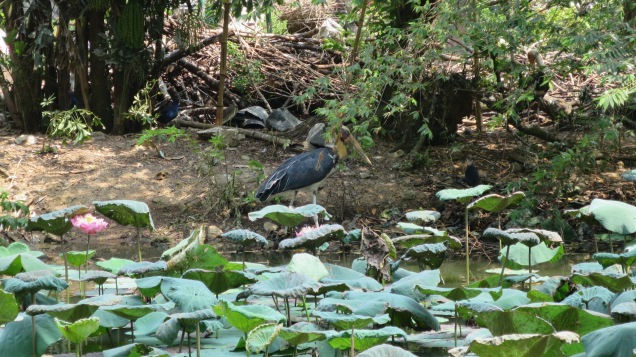 And this bonsai – dozens of them on display – beautiful. 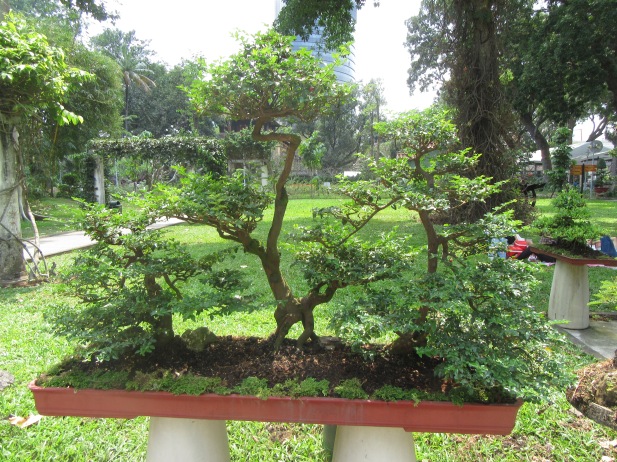 There is so much more to tell you about Saigon – not nearly enough time or space. I’ll sneak in this one photo of the subway they are working on – hoping to relieve current traffic congestion and anticipating future growth. 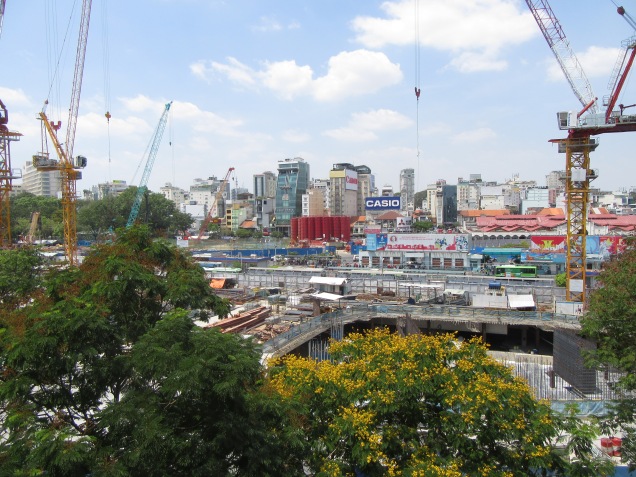 But will a new subway or monorail lure the Saigon residents away from their motorbikes? As long as one is able to cut through traffic by hopping up on the sidewalk (warning pedestrians with a gentle beep) it may be a tough sell.

Good-bye Saigon – over all too soon.  Next stop – the mountain town of Dalat.