For those of you too young to get the reference, The Russians are Coming, The Russians are Coming! is a 1966 Norman Jewison comedy that played into American fears of a Russian invasion.
Nha Trang is a Vietnamese beach town that is as famous for its long white crescent beach as it is for the very literal invasion of Russian tourists and expats who have made this their personal playground. 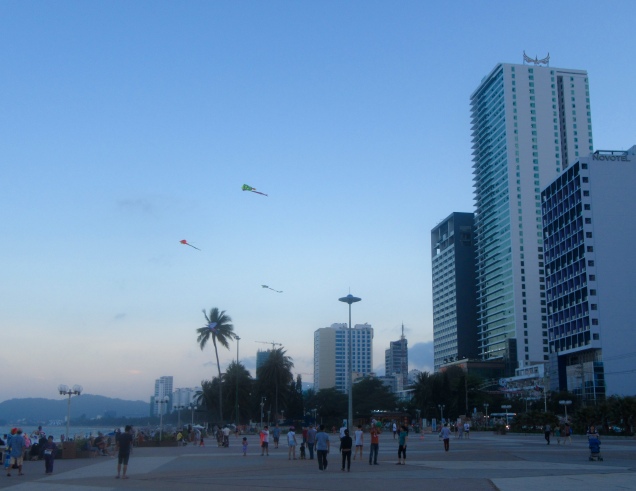 Oh sure, you’ll see Asian tourists and a few Europeans and even the odd Canadian, but Russians outnumber us all by 10-1. Hotels, restaurants, tour groups and stores cater to the Russian market. Most menus are in Vietnamese, English and Russian and if you are hankering for a massive wooden platter with potatoes and five varieties of grilled meat, you have come to the right place.

We had heard iffy reports from fellow travellers, but we were there for a day and two nights to break up our long travel north to Hoi An.

The promenade along the ocean is lovely, lined with high-rise hotels and softened with a shady, sculpture-filled park. Walk two streets away from the beach and Nha Trang is not a pretty place. It’s got a bit of a reputation for being a hard-partying town.

Nha Trang could be a beach in a lot of places, but nothing about it feels like Vietnam.Any nationality in large numbers will dominate and define and ultimately change a place. The dignified and modest Vietnamese residents have been bombarded by people who look fresh from auditions for “What Not to Wear”.

Butt floss and banana slings are alive and well in Nha Trang. But it’s not all tacky t-shirts and buckets of booze.  There are plenty of Russian families, many of them multi-generational,  playing in the sand with their kids.

I didn’t encounter many friendly Russians – my smiles were met with stares, but hey – they’re not here to make new Canadian friends. They’ve got their squad with them.

The Asian ladies on the other hand seem fascinated with me. When we were in Laos, I saw three women staring at me and smiling and one of them surreptitiously took my photo. On our bus from Saigon, I had two ladies come to me and start stroking my arm and laughing.

And yesterday Stephen and I were sitting in the park beside the beach, watching two women posing for photos. The next thing we knew, they were cuddled right in beside me, with their friend snapping away madly. We think it is my white hair – many Asians have dark hair until they are very old, so I am a bit of a novelty.

Stephen told them I was a famous Canadian movie star, but I don’t think they understood him. 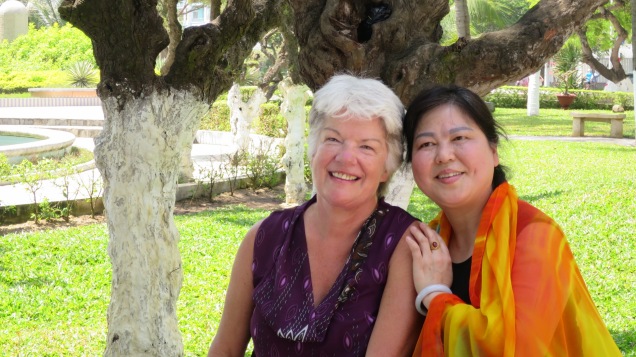 We continue to be amused and curious about the sometimes quite intricate choreography that goes into the Asian photo or selfie. I would love to have access to some of their photo albums.

This lady had posed by a tree with her scarf draped provocatively, one leg kicked back, and hair tossed. Then… another, more serious and reflective, gazing skyward. She will have at least 20 similar shots, not including the many they took with me.

We watched this group for quite a while. They had four or five people photographing them as they clapped their hands, waved them overhead, did small steps , etc. At first I thought they were practicing for a routine and we would be treated to an impromptu performance.

and another group …Mum, daughter and friend. I think the whole world’s gone mad.

We dipped our toes in the water and Stephen went in for a swim, but mainly we entertained ourselves by people-watching and walking the promenade. 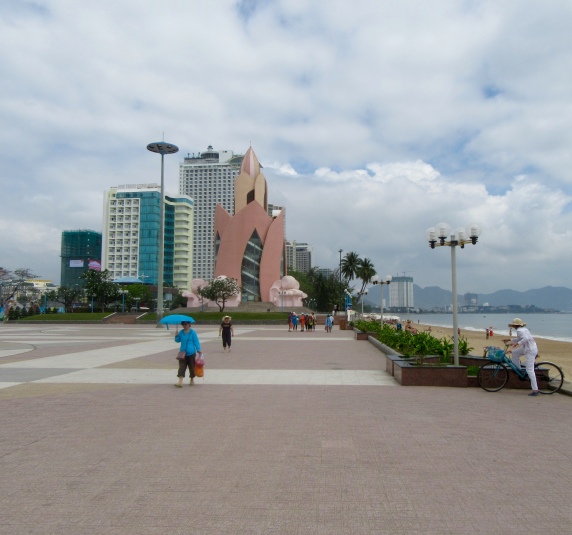 Halfway down the beach is a massive complex with multiple pools, sunbeds, umbrellas, food kiosks  and all manner of beach accoutrement catering to the Russian tourists. The facilities were lovely and prices were extremely reasonable (a sunbed rental was about $3), and its easy to understand the appeal of a foreign destination that speaks your language.

It’s not all borscht and blini though. As we walked by, this crocodile was slowly turning on the rotisserie. Two hours later on our return walk back, all that remained was his head and skeleton – he had been picked clean. We haven’t tried crocodile yet -they say it tastes like chicken. 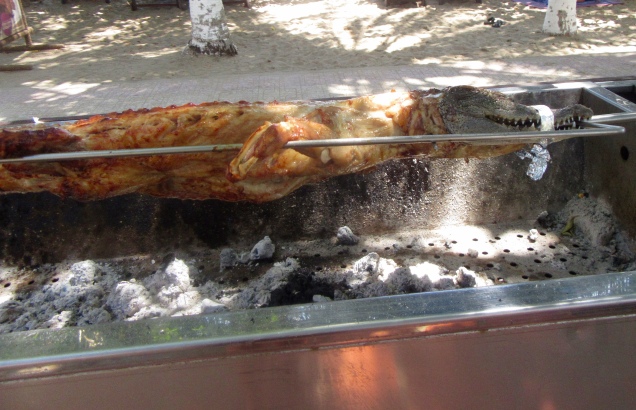 Here’s a healthy food choice – the tempting array of fruit that can be found on most street corners in Nha Trang.

We came to Nha Trang not expecting much, and yet it was still an intriguing place to see –  just for a couple of days. If it’s not our cup of tea, that’s not holding back the many work sites in full swing. Like much of Vietnam, Nha Trang is in the middle of a building boom.

We wonder about the saturation point – at what point will there be too many hotel rooms in this city ?  We had building sites all around our hotel and across the street. This big project says it all (in English!)

6 thoughts on “Nha Trang: The Russians are Coming!”