This blog posting will be less tell, more show.

First a quick intro: Hoi An was a major shipping port in the 16th and 17th centuries, with Dutch, Japanese and Chinese traders passing by these very walls. It would have become a much bigger city, but in the 19th century, the river silted up and big ships were no longer able to pass through. The town  languished until its 1999 designation as a UNESCO World Heritage Site turned it into one of SE Asia’s most popular tourist destinations.

The tourists are here in huge numbers, and that is the one critique I have of this town. Ancient Town is a madhouse and as a tourist myself, I am adding to the mayhem, so my criticism is hardly fair. If it is uncrowded streets and mellow moments you are looking for, get here really early in the morning. 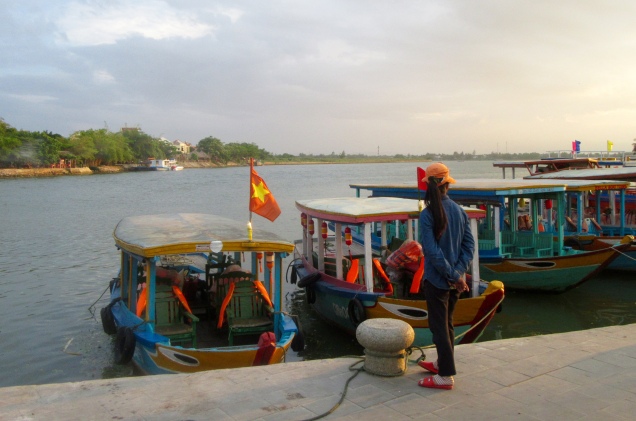 Since Hoi An’s tourist life revolves around the river, we will begin there. Boats are for hire, for short cruises at sunset or for longer tours. 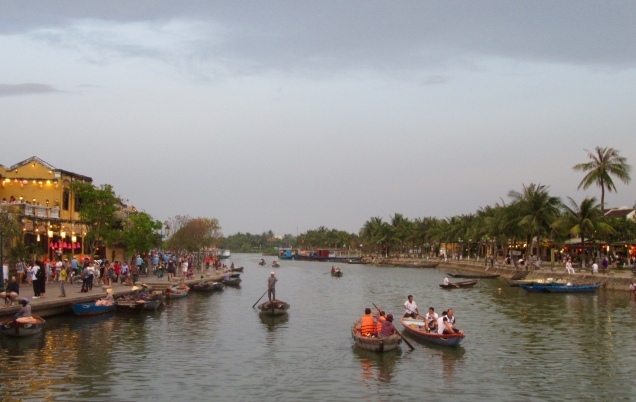 While Ancient Town runs back from the river on both sides for several streets, the riverfront promenade provides a natural gathering place and events are held most nights. A Food Festival was on one night, with two intense and sweating chefs  stirring the pot.

Further down the promenade, we watched two girls wade into the river, which is really filthy.  Here, they’re gathering around to show off their catch – big black snails.

As the late afternoon turns into early evening, the light and atmosphere on the waterfront is magical. The heat and sun has been replaced with a welcome light breeze.

These kids were having a great time pushing each other around on this little bike. 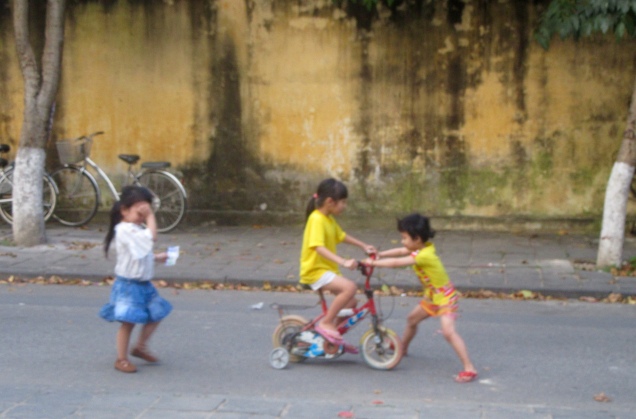 This little one was quite unabashedly twirling her skirt and mugging for the camera.

I watched this beautiful woman for a minute or two – she never moved. Deep in thought or just enjoying a quiet spot away from the tourist throngs. 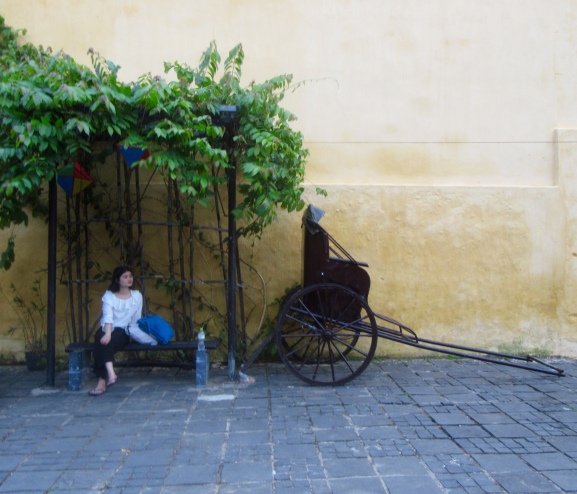 Many Vietnamese carry parasols – an excellent idea now when the sun is so hot.

I was caught by the expression on this mother’s face. She was showing something to her little children and had their full attention.

There are so many twisty little alleyways – it would take days to explore them all. 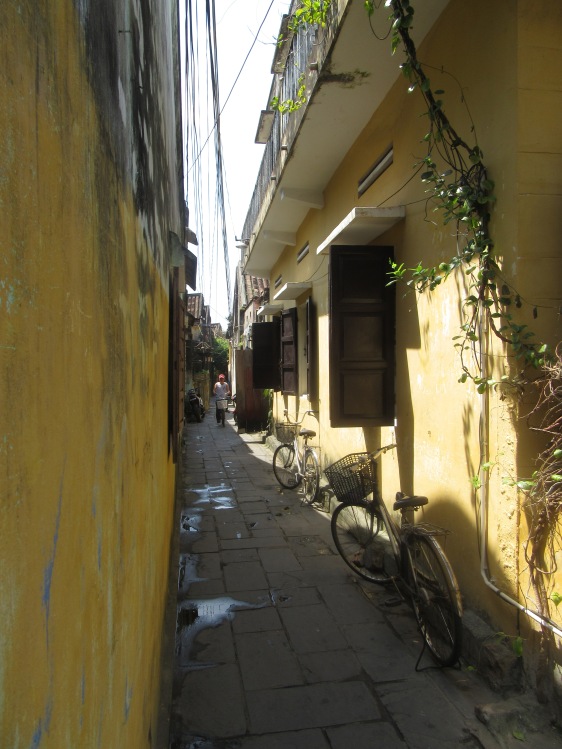 Great boughs of bougainvillea and flowing shrubs hang over doorways – bright bursts of colour against the ocher walls. 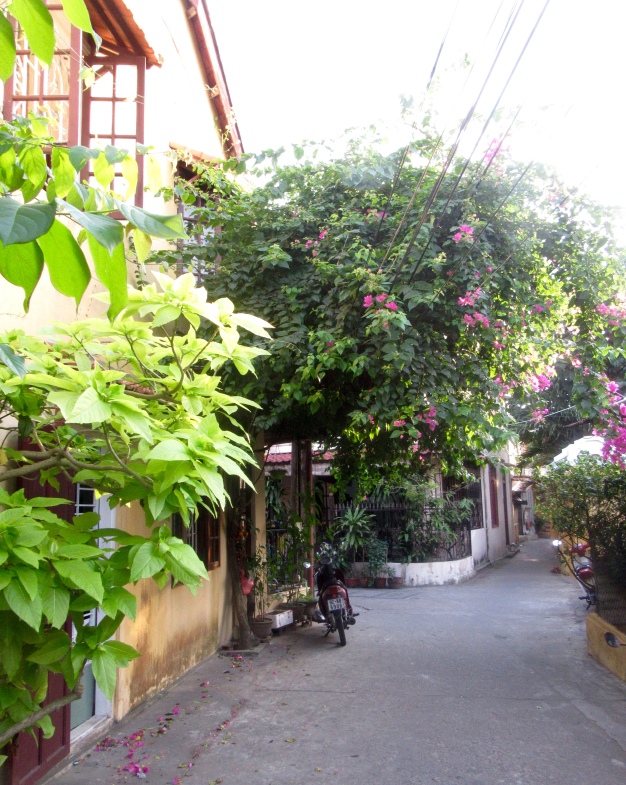 Hoi An has a number of art galleries, with striking contemporary art by young artists. 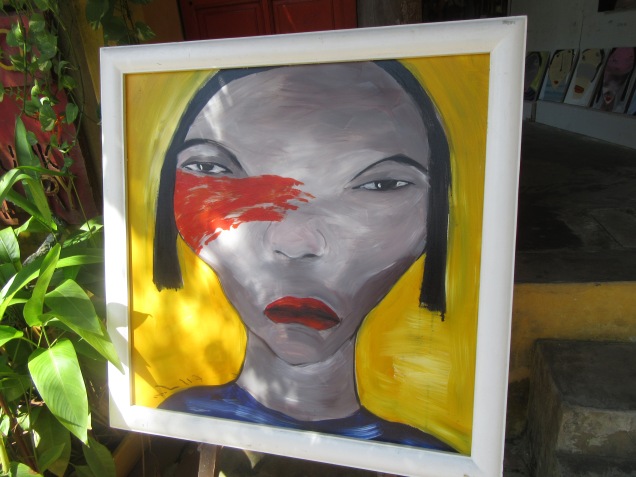 This young man was painting on the sidewalk, and took a moment for a smoke break.

To enter Ancient Town in Hoi An, you must buy a pass (about $8) that entitles you to the entrance of five old shophouses, or assembly halls or museums. That money goes to a foundation to help preserve the old structures.  I took this photo from the second floor of a Chinese merchant hall. The railings and staircase felt a little fragile, and the walls are dark, but we got a good sense of how the town must have felt in its trading heyday. 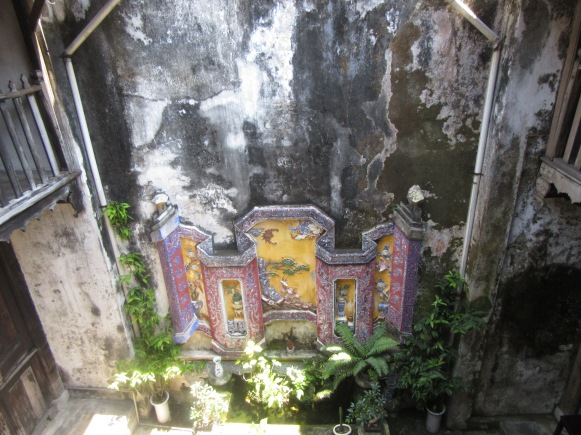 The Japanese Covered Bridge is another example of the carved wood and rolled roof design of the structures in Hoi An.

Tailor shops and  textile handiwork is huge business  in Hoi An. In this room, a number of young women were at work embroidering fabric. They spoke no English, so I was unable to ask them about their work, but I suspect they put in long hours. If you look carefully, you can see two women sleeping on the floor.

There are hundreds of tailor shops in Hoi An, but only a few of them are well-regarded. In this case, you really do get what you pay for.  Many turn out identical garments in 24 hours or less and they can be of poor quality. Having a suit or dress made here requires careful  research and word of mouth recommendations.

We wondered who the target market is for these bouncy and confident suits.

I stopped to take a photo of the catchy sewing machine display – an homage to one of the town’s big industries. But then, the model caught my eye. Where did they find this Caucasian mannequin with mussy bedhead and a slightly regretful expression in her eyes?

The food in Hoi An is fantastic, and the range of restaurants is staggering. Everything from ladies selling sweet potato cakes on the street to reservation-only hot spots with American prices. We ate so well, and darned if I did not take one photo of food. I just kept forgetting – the food would arrive, we’d start to eat and make a mess of our plates and then, I’d remember.  You’ll have to take our word for it.  This was our view from a favourite restaurant.

And now, a sunset and evening tour of Hoi An: 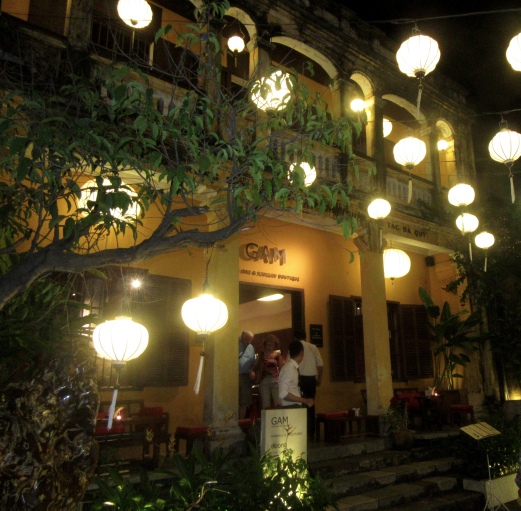 Lanterns are a big deal in Hoi An. The streets are strung with them, people buy small floating lanterns with candles to launch on the river, and they are for sale everywhere. This display proved to be an irresistible backdrop for a holiday photo.

The bridge over the river is adorned with two graceful signs –
especially beautiful when lit at night. 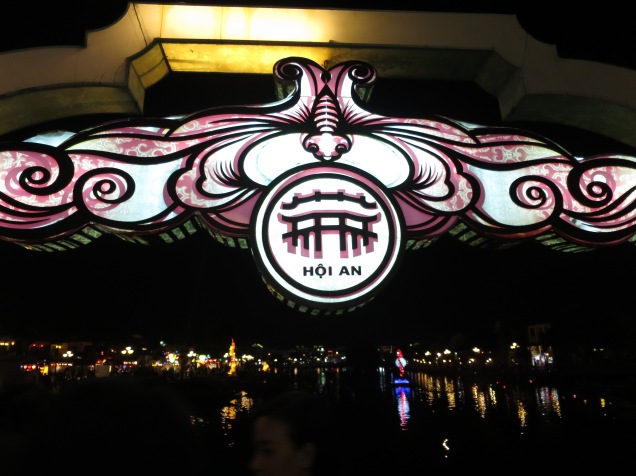 Good-bye Hoi An. Thank you for giving us such a relaxing and elegant vacation.