Five bucks goes to the first person who can tell me what a duster is. 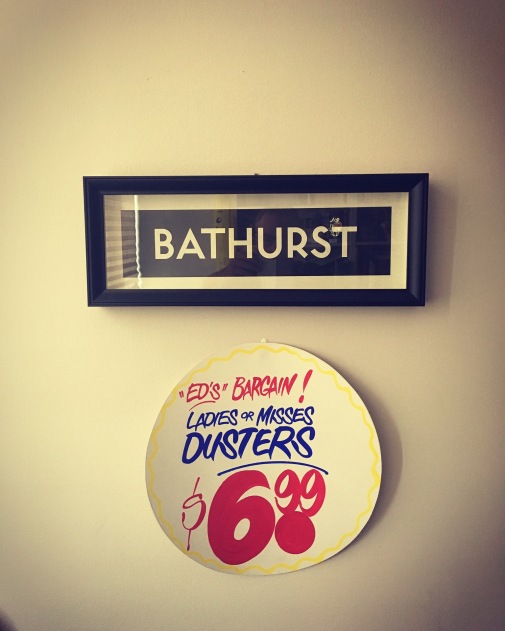 This ephemera is part of the Lorne Katz collection. Another five bucks goes to the person who knows who “Ed” is.

Ed is Ed Mirvish, the late, great one-of-a-kind businessman who built theatres, restaurants and Honest Ed’s –  a square-city-block emporium to bargain shopping. He helped put Toronto on the map back when it was still competing with Montreal. Shoppers lined up for his specials – such as the one shown – the $6.99 duster. When Honest Ed’s closed its doors last year, among the items for sale were thousands of these signs – each one hand-painted and many of them speaking to an era that is now gone forever.

You have to be at least my age to know this, but a duster is also known as a housedress – garments universally hideous and instantly identifiable by their gaudy florals, often embellished with ric-rac trim and a front zipper.  Long before the days of yoga pants or even sweatpants, women threw on their dusters to vacuum, scrub and…dust. My mother wore them. Another item of note – the use of the word “misses” was for women of average height and weight, while “ladies” indicated a curvier body. I haven’t seen the use of “misses”  or “ladies” for a very long time – “vanity sizing” has taken over.

Back to Lorne and Anne Katz – dear friends from our pre-children days in Toronto. We grew up together.  Eventually we moved west, but stayed close and now one of their sons, Jacob, has a child of his own. Their other son Aaron, just got married three weeks ago in Germany to Vanessa; they are living in Berlin and back in Canada for their honeymoon. We had a fabulous multi-course dinner with them when we stopped by for a night with Lorne and Anne – a lot of laughs, but another reminder of time just flying by. 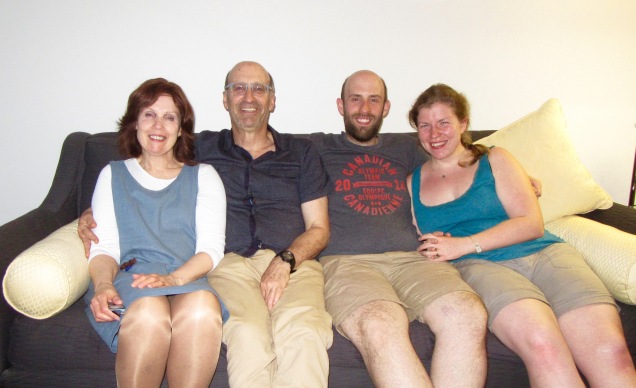 I have little to report on Toronto – we’ve been in twice to see friends and I will likely be back again at least once in August. I love Toronto – even though housing prices are now rivalling Vancouver, it is still a city of neighbourhoods and nationalities and has retained enough grit and personality to keep it interesting.  Toronto would require a blog of its own, so my best advice if you haven’t been there yet, is …go! Discover it for yourself. I’ll talk about other things.

Like Farren Lake, in eastern Ontario.  Kris and Gord (whom we met two years ago in Mexico and who are partially unhoused) have the perfect solution. They sold their home in Windsor  and moved to their cottage on Farren Lake, where they live from mid-April to mid-October. The rest of the time they travel. Their lovely cottage, which they describe as “rustic” (it’s not – it is snug, beautifully furnished with unique finds and has a screened-in porch), is my happy place. Rock and floating dock, with pristine lake, loons and canoes. It is iconically “150” Canada – all they need is a Mountie and a jug of maple syrup.

There was a good wind and a chop on the water – the only one who braved a swim was Stephen. You will never see a photo with me jumping into cold water – that is a promise.

After a great gab and delicious dinner, we all settled down on the dock to watch the sunset.

Good-bye to Kris and Gord – a la prochaine.

The beautiful little town of Perth is just a half-hour away, so we stopped by for a visit. It is filled with stone buildings and weeping willows and reeks of history – a photographer or painter could spend hours here. 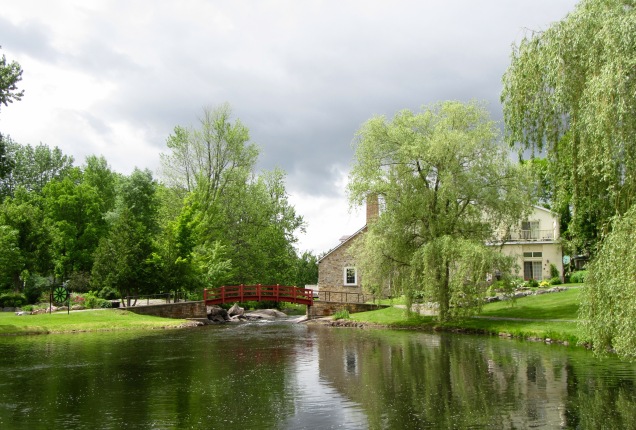 So could architecture buffs. This appears to be a private home (I saw no B and B or municipal signs). Typical of the fine details and stately proportions of many Perth homes, although on a larger scale. 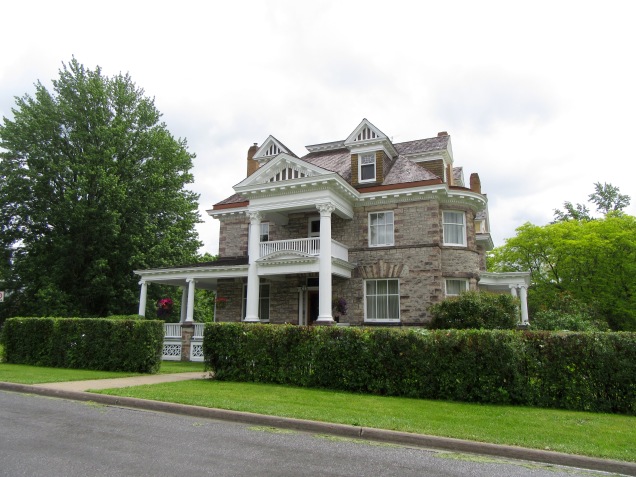 The River Tay runs through town, with lots of shops and restaurants lining it, and the main street.

We passed by the statue of Big Ben, the champion show jumper from the ’80s, ridden to victory by equestrian Ian Millar, who owns a stable near Perth. 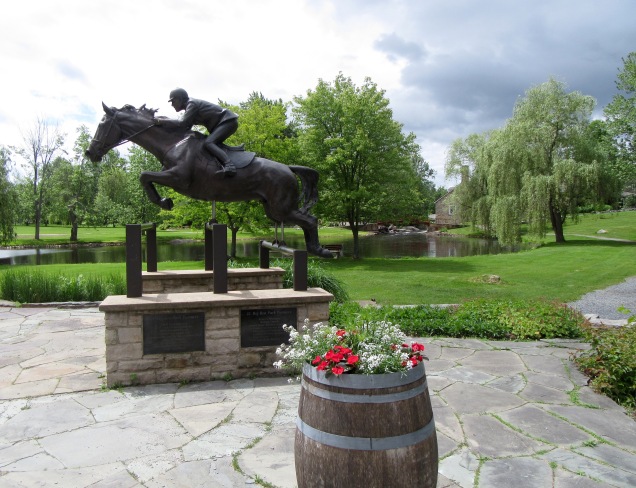 Their outstanding accomplishments are listed on a nearby plaque.

And with that, we left Ontario behind and drove straight into La Belle Province. My family is from the Gaspe coast and I was born in Montreal, but entering Quebec is like a foreign country. It always feels a little je ne sais quois, including my inability to make myself understood in my high school (plus one teenage summer immersion in St. Pierre) French. While in Quebec I feel somewhat ungainly and upon leaving, I resolve to buy only fabulous shoes.

Minor insecurities aside, being in Quebec is a buzz. The following photos are just a preview on our way to the Maritimes. We will spend much more time in Quebec on our way back in August.

We called in at the Fairmont Montebello hotel, located about 90 km. from Ottawa.  The world’s largest “log cabin” was built in 1930 in just three months, in the form of a six-point star, out of 10,000 hand-cut B.C. red cedar logs. 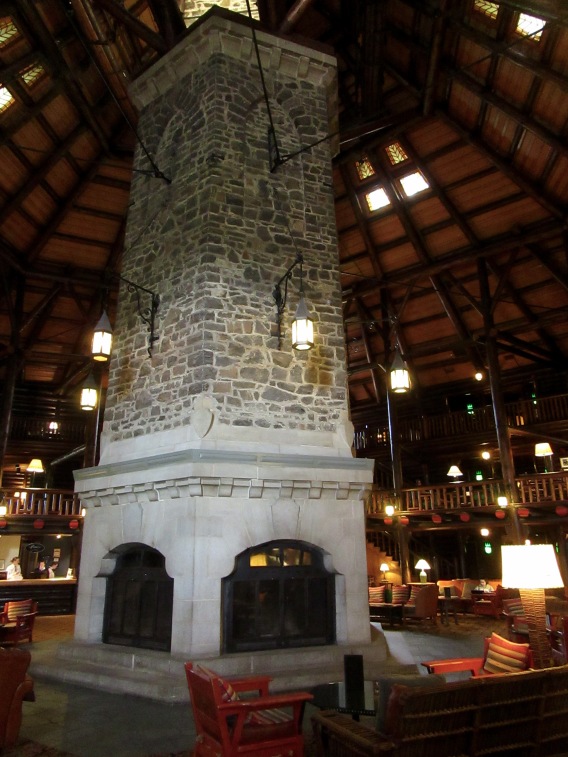 Set on the Outaouais River, used by the first voyageurs, Montebello is a destination for history buffs. 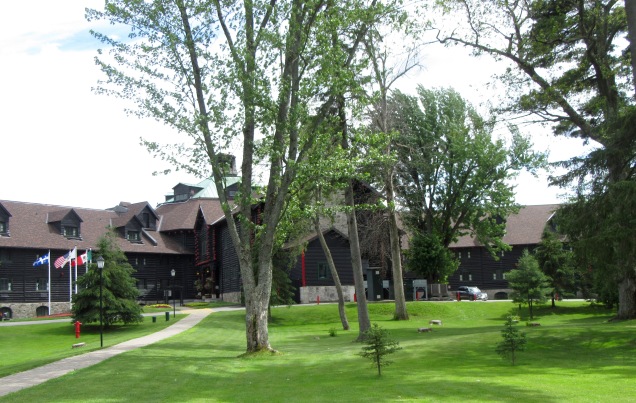 I spoke to the very friendly concierges, Jessica and Rosalie, posing here with the very shy hotel mascot, Bello.

We spent our night in Trois Rivieres, drove over the bridge at Quebec City and up the coast toward Riviere-de-Loup, taking the old highway as much as possible.

Some of the sights along the way: 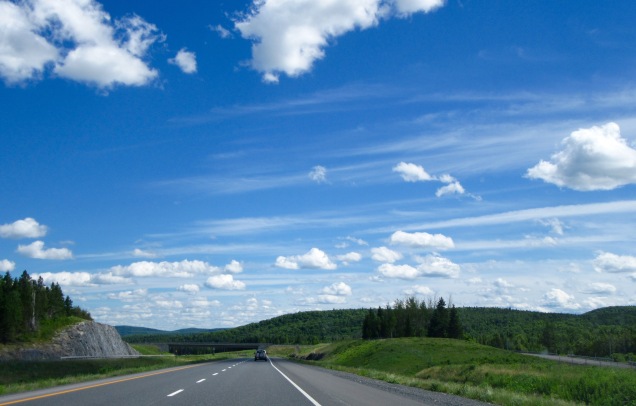 Quebec has a tradition of wood carving – everything from lamps to furniture to toys. Must be the long, cold winters. 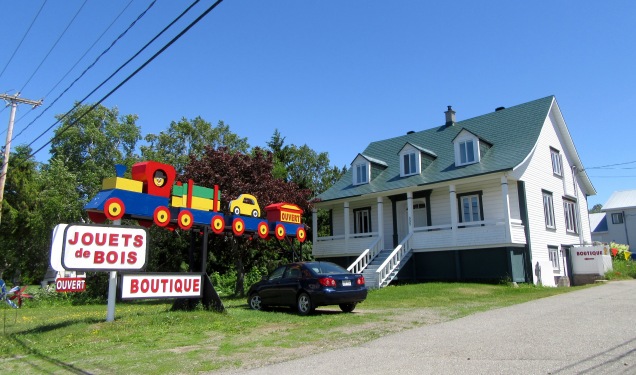 Making our way into New Brunswick (Nouveau Brunswick – the other French province). Beautiful scenery on our way to Edmunston – a stop for many on their way to and from the Atlantic provinces. 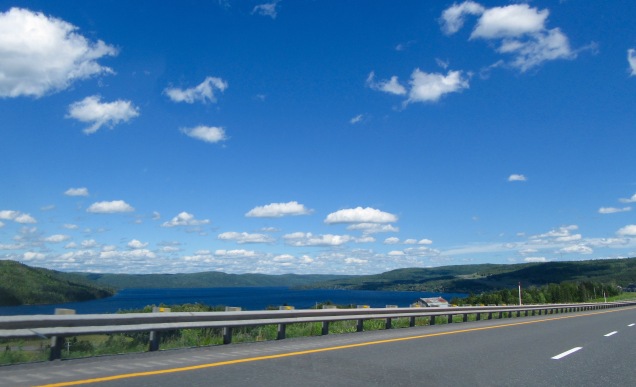 We are staying at Motel Cleo – a combination hair salon, spa and themed-room motel (five rooms appropriately decorated – we are in La Chine; Paris and Rome were booked). Our first dinner in the Maritimes and fittingly, it was seafood – at La Pirate de Mer. Stephen had fresh haddock and chips, and I had a lobster roll – split toasted hot dog roll filled with big, fat chunks of lobster. More great food stories to follow.