“If you go to St. Vincent’s, you’ll see humpbacks not 20 metres offshore,” we heard from reliable sources.  St. Vincent’s is a small village on the “Irish Loop” – the southern part of the Avalon Peninsula where a majority of Irish immigrants settled hundreds of years ago. The beach is very unusual, as it has a deep drop-off, which allows the whales to swim in almost close enough to touch.

The opportunities to see humpbacks around Newfoundland are ideal for the next several weeks, as the capelin are rolling. Whale-watching boats are in high demand; with most trips reporting great success rates. We decided to follow the advice of our friends and see our humpbacks like the locals – right from shore and at no charge.

We had a full day planned – stop at a number of historic villages down the eastern shore and finish our day with the whales.  About a half hour away from St. Vincent’s, we drove into this:

Our day instantly changed from warm and sunny to damp, chilly and monochromatic.
As promised, as soon as we arrived at the beach, we saw a whale very close to shore. We ran down and followed along, but this was the best I could do for a photo – a few glimpses of two humpbacks, who then disappeared for about half an hour.

We stayed on the beach, shivering and disconsolate, until finally we got a second (and final) glimpse of a humpback – the show was over.

Timing with wildlife sightings is everything. We’ve heard stories (possibly embellished) of up to 20 whales at St. Vincent’s – breaching, racing for shore with great jaws open for feeding, thrashing in the water – Discovery Channel moments that we were not destined to have this time around.

Luckily for us, there was much more to see on the Irish Loop and our day began with the Bay Bulls/Witless Bay area about an hour south of St. John’s.  The scenic highway follows along the east coast and covers a number of significant sites.

This oil rig is stationed at Bay Bulls for a servicing before being sent back out for duty.

There is much to be seen on this coast – The East Coast Trail runs the length of the peninsula and can be hiked in small parts or in multi-day excursions. Every bay and village is steeped in history and geology and natural wonders – it would take weeks just to cover this small part of the Avalon Peninsula. If we had more time, we would have spent the day at the Witless Bay Ecological Reserve, to observe the whales and puffins who live in this rich habitat.

Since we are on a fairly tight time frame in Newfoundland (three weeks), we are just skimming the surface.  Ferryland (pronounced Furlan) is a very old settlement – founded in 1621.

We spent a few moments in the cemetery on the hill – the oldest headstones were indecipherable, but many dated back to the early 1800’s.

Ruins of the original colony  from 1621 were discovered in 1980 and have been recreated as the Colony of Avalon. This is still a work in progress, but the original cobblestone streets, slate walls and a reconstructed garden are in place.

We drove further south for several kilometres, with views like this one unfolding at every turn.

A little roadside whimsy – a number of rural garbage bins are decorated to spruce up the contents – the theme of painted houses is a common one.

The theme of painted houses is also a common one in St. John’s – a city like no other. We are absolutely in love with it – there is something for everyone.  History, architecture, art, music, literature, tragedy, comedy, great food, fabulous sightlines and like the rest of the province – the most big-hearted, open and wonderful people. We were sad to leave and it won’t be too long before we’re back again. Like the rest of the province, it has left us wanting more.

I’m going to try and paint as full a picture of St. John’s as I can. Beginning with Signal Hill National Historic Site  – the original command post for defence of the city, right up to WW II. It is also the site of the reception of the first transatlantic radio signal, confirmed by Marconi in 1901. 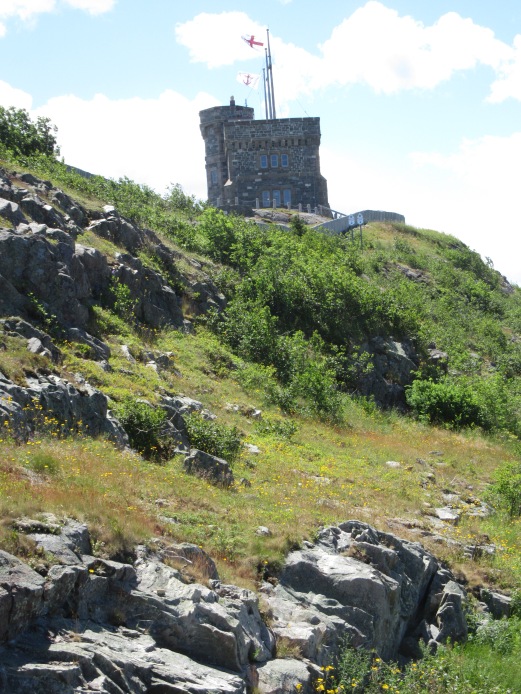 The Queen’s Battery, whose cannons overlook the harbour.

There are two ways to see Signal Hill – one is to drive up to the top, explore Cabot Tower, wander the grounds and admire the jaw-dropping views.

The other is to walk through the Battery (the collection of homes and boathouses that cling to the side of the cliff) and make your way along the cliffside up to the top. We did both – on different days. On the Battery Road walk, you need sturdy shoes, water and an ability to deal with heights. We started off easily – walking past a beautiful mural depicting this area in its early fishing days. 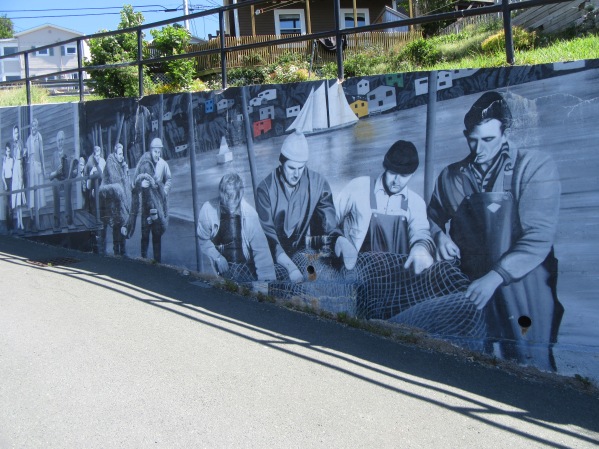 We walked past a gentleman who was watering his flowers. When I asked him if  he was responsible for the beautiful flowers, he replied, “Oh no, my dear, they’re my wife’s flowers. I give her the day off on Sundays.” 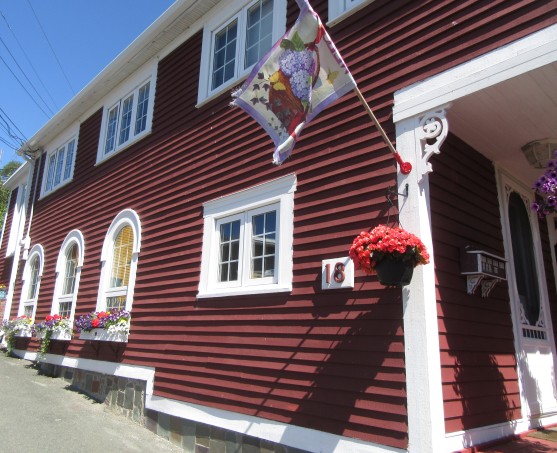 Then the climb began – and the views just kept getting better and better.
There’s a short section where the path narrows to a ledge that wraps around the cliff, with a sheer drop on the other side. The park has installed a chain rope to hang onto until the path widens again.

We stopped here to watch a few whale blows, but they disappeared behind the point on the right.

And at the top, the reward: a sit in the famous red Parks Canada 150 chairs.

Churches are plentiful in Newfoundland, and the Anglican (English) square off with the Catholic (Irish). While there are a number of ornate churches in downtown St. John’s, The Basilica – Cathedral of St. John the Baptist wins the splendour sweepstakes.

Much of St. John’s is filled with character homes, but most tourists will see the streets that run back from the harbour. What isn’t apparent is that a lot of the downtown homes used to be rundown and uncared for – this was considered to be a slum. There are a number of streets that have not yet been gentrified – modest, but plain. They are likely available for under $200,000 each. 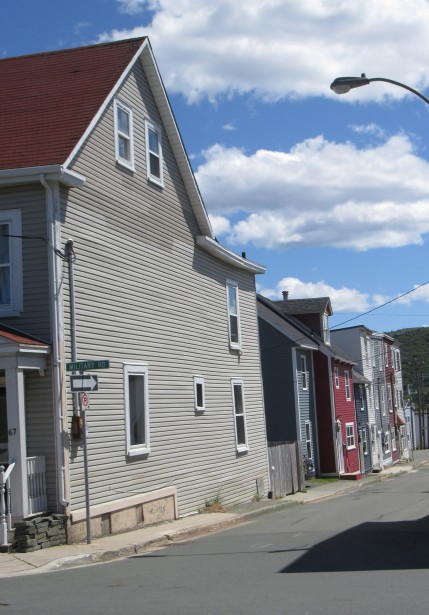 This home is more typical – right down to hanging baskets that match the paint job. The old shutter door is a charming touch. 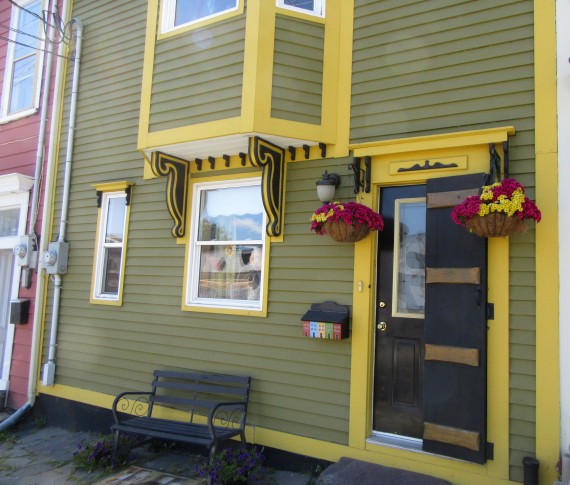 This bed and breakfast is a grand old dame – I wish I had popped across the street for a peek inside.

Several businesses and shops have been around for decades. Joe’s Barbershop has been operating for over 30 years – a tiny nook with two barbers – both women! 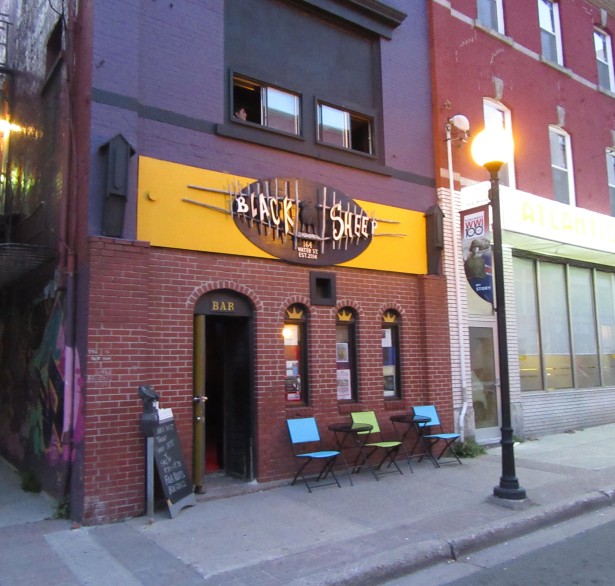 The showpiece of St. John’s is The Rooms, which dominates the skyline and is a place of pride for the locals. This museum/gallery/cultural centre contains some of Newfoundland’ s best historical, ethnographic and fine art collections. The striking architecture mirrors “the rooms” where Newfoundland families brought their catch. It is simply breathtaking, inside and out, and requires at least 3-4 hours to take it all in.

The view from inside, looking out over the city.

And another view, from a different part of the museum. 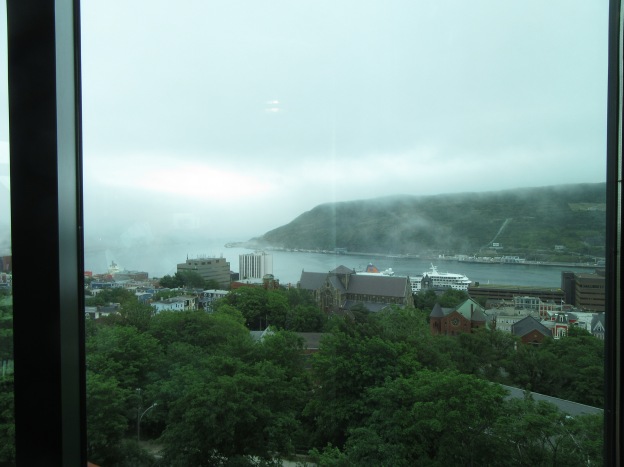 We were very interested in seeing the exhibit by the late Gerry Squires. He was one of Newfoundland and Labrador’s most notable artists, whose prolific work was imbued with his sense of melancholy over the challenges Newfoundlanders have faced for so many years. Resettlement (1977) is a commentary on the  forced relocation of so many small communities during that time. It  features the hunched figure of a government bureaucrat, with gravestones bearing the names of the communities that have been lost forever.

Another moving painting by Gerry Squires, along the same lines of loss and alienation. 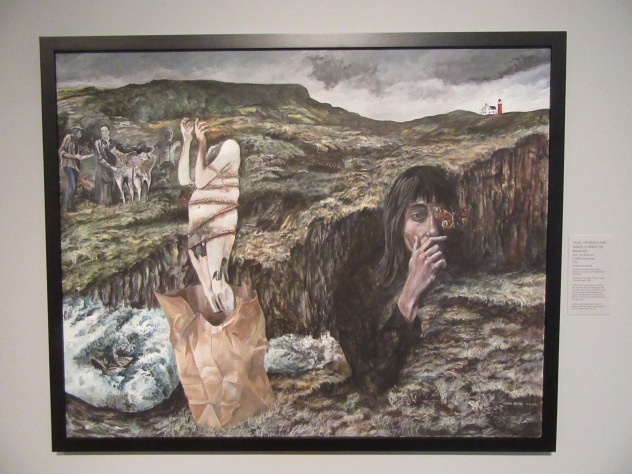 There were several sections on Newfoundland’s relatively recent history, including the story of Joey Smallwood and his contentious campaign to join Canada.

The cod moratorium in 1992 was devastating, causing over 35,000 lost jobs and created an impact that the province has never fully recovered from.

A memorable quote from the inimitable John Crosbie: 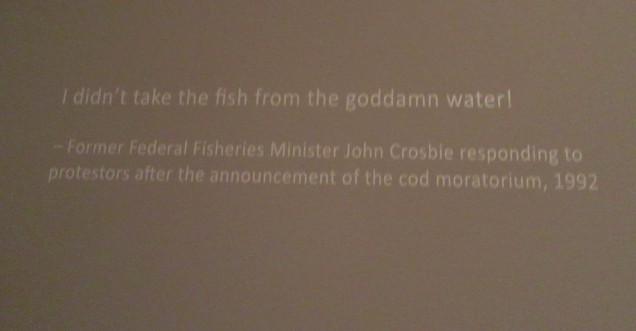 In the historical exhibition hall, we discovered a few explanations of what makes Newfoundlanders who they are, and why they never really leave “home.” This is true of so many people we’ve met – even if they have lived in Alberta or Ontario for years, they never stop being  Newfoundlanders. 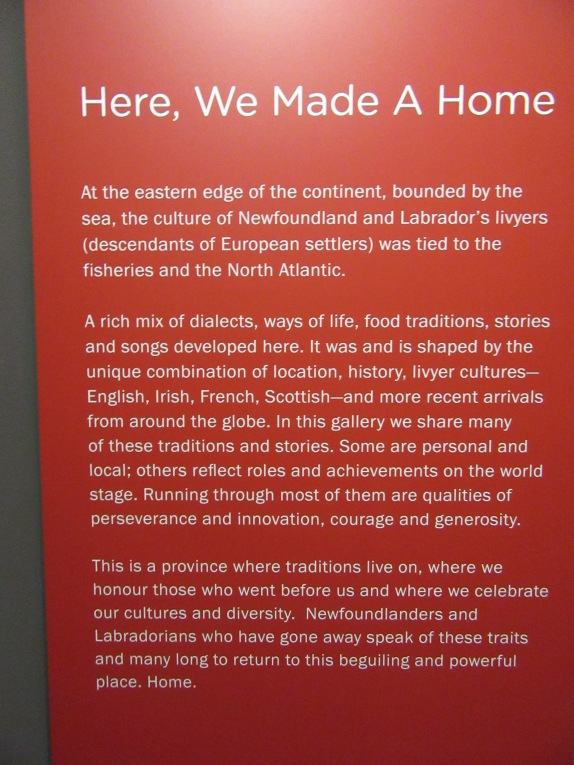 We’re in Bonavista now – just arrived this afternoon – we have another two full days to pack it all in before we leave Newfoundland.

Till we meet again – Long may your big jib draw.

The kids on holidays at Blue Mountain Village. #holidays#grandparents#bigchair#stephenpaulburr#leavingourselvesbehind#fun#bluemountain#ontario#collingwood
Museo Soumaya, Plaza Carso, Polanco, Mexico City is a private museum founded by Carlos Slim. The museum, named after Slim’s late wife Soumaya Domit, displays over 66,000 artifacts which are wide ranging - from Pre-Hispanic Mesoamerica to Rodin and Dali.
Palacio de Correos ( Correo Major) The central post is located in centre of Mexico City. Its architecture style is described as eclectic - including Art Nouveau and Spanish Renaissance Revival amongst the styles present. #Palacio Postal#mexicocity#artnouveau
San Angel is charming and affluent neighbourhood in Mexico City. Filled with lush gardens, artful architectural styles, Saturday art markets and the homes of Diego Rivera and Frida Kalho. Along with their homes is a floating studio space that was used by the architect Juan O ‘ Gorman. Diego lived on site till his death in 1957; while Frida eventually lived mostly at Casa Azul in #. #sanangel #diegorivera #juanogorman#mexicocity#fridakahlo#casaazul
Coyoacan (coyote) is considered a cultural neighborhood… it is the location of Casa Azul, the museum/home of Frida Kahlo. Coyoacan feels very independent from Mexico City, it is filled with restaurants, markets, parks, and the Alfred Guati Rojo National Watercolor Museum. The Museum is a charming property is a must visit while in the area. #coyoacan #alfredoguatirojo🎨 #mexicocity#fridakahlo
We are in Mexico City staying in the Condesa neighborhood across the street from Parque Mexico. An excellent walking neighbourhood filled with cafes and very interesting architecture. #parquemexico #mexicocity #cafes#artnouveauarchitecture