Based on our travels through India so far and with so much yet to see, we can’t say for sure that Udaipur lives up to its marketing slogan, but it is certainly one of the most photogenic we’ve seen. 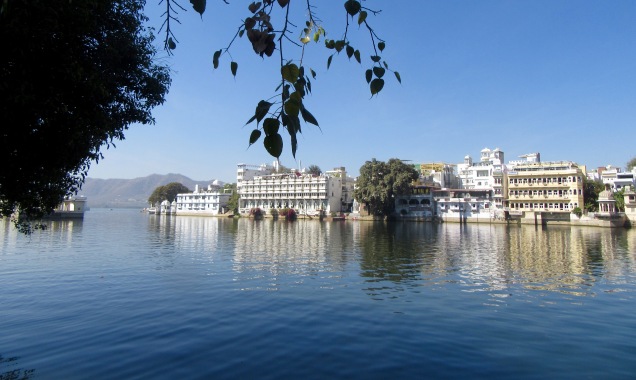 Udaipur is a city of lakes and mountains, with centuries-old havelis ringing every shore – the setting is magical. Rooftop dining is romantic – many restaurants boast views like this.

But there will be no romantic strolling hand-in-hand through charming narrow lanes. Those charming narrow lanes create a constant bottleneck of traffic; a chaotic every-man-for-himself pedestrian and vehicular mash-up, accompanied by nonstop honking and beeping. There is but one way to navigate – wade in, watch your toes (for cow shit and motorcycle wheels), and keep moving. You’re unlikely to be hurt if you do get hit – no-one is going very fast.

Based on everything we had read about Udaipur, we arrived here with great expectations and the city has lived up to them all. This is the “White City” (Jaipur was the “Pink City” and Jodphur is the “Blue City”) – so-called because of the predominant paint colour of many of their buildings.  Crazy traffic aside, Udaipur is a walker’s paradise – twisting, winding alleys open into main streets, then close up again, to bring you closer to the heart of the local neighbourhoods.

These neighbourhoods are not rich. Many of their citizens may do their bathing and laundry in the lakes. We got a glimpse into lives that are poor, but not desperate – possibly typical of how many Indians live.

Before we arrived in the north, we were told that the people here were “different” – a little harder, a little tougher, the men a bit scary. We have found exactly the opposite – we’ve found the people here to be so friendly, and welcoming and curious. Sure, the men stare, but that is cultural, not threatening – I just walk by.   The women stare too,  but I smiled and they smiled right back. When I asked if I could take their photo, the lady in the middle perked right up. She primped her hair, adjusted her headscarf and demanded to see the photos afterward.

Now before I go any further into extolling the many virtues of Udaipur, let me confess that we succumbed to the starstruck madness of Octopussy – a hilariously cheesy James Bond film that was shot largely in Udaipur in 1983. Long before the days of #Time’s Up, Roger Moore is at his eyebrow-lifting, double-entendre best and of course, every Indian stereotype is hauled out.

A number of restaurants are still dining out on an event that took place 35 years ago, by showing the movie every night. Obviously saturation point has been reached, as we were the only diners in our chosen restaurant but we had a great time laughing ourselves silly. We were asked to suspend disbelief long enough to imagine James on an island full of young women in red jumpsuits (when he was not fighting an angry Sikh on top of a  plane, or navigating crowded Indian streets in a tuk-tuk capable of pulling wheelies down staircases).

Since James Bond stays only in the finest hotels, we followed his path to the ultra-luxurious Shiv Niwas Palace Hotel, part of the City Palace complex, and apparently closed to those who can’t spring $600 a night for a room. I can’t say I blame them for their discretion – busloads of camera-wielding tourists hanging out in the lobby and checking out the washrooms would put a serious crimp on the exclusivity of the place. This is as close as we got.

Another exclusive hotel – Lake Palace Hotel – is accessible only by boat, thereby guaranteeing privacy from the non-guests. This was the scene of Bond’s women-only fantasy island.

Stephen and I said that one day we might treat ourselves to a crazily-expensive, full-on pampering retreat. Then we discussed it a little further and realized first we would need to upgrade our wardrobes, get better haircuts, perhaps lose a few pounds and invest in a decent suitcase. Then we would need to cultivate insouciant attitudes – it all feels like way too much work, and so not us.

City Palace – the star attraction of Udaipur, Rajasthan’s largest palace and a seriously impressive complex of several buildings connected by courtyards. The first building began in 1599 by Maharana Udai Singh, the city’s founder.

You enter the place by the main gate, Tripolia, built in 1725. Now we’re talking – this is the India of my imagination.

And this guard, resplendent in uniform and Rajasthani moustache – handsome and proud.

The palace is graced with many shady courtyards, to rest and recover from the sun – a godsend. It allowed us to spend three hours wandering, without buckling from heat exhaustion, as is so often the case with trudging around large palaces and forts in the hot sun. I watch groups of senior travellers, red-faced and sweating, clutching maps and brochures, and feel sorry for them, until it dawns on me. “I too am a red-faced, sweating senior, slugging water and gasping like a guppy. ”  I may never get this whole travelling-in – hot-countries thing down gracefully.

One of the many decorative courtyards, with stained glass, mirror and glass mosaics and intricate carvings.

A closeup of some of the mosaic and tile work.

India is full of charmingly-phrased signs; a country where English is prevalent, but often a tiny bit lost in translation.

Another movie nod – this time for a substantially more worthwhile film – Gandhi. The glasses Ben Kingsley wore for the film are on display.

Another important building is the 18th-century Bagore-ki-Haveli, once a prime minister’s residence that had been left to ruin and was fairly recently restored.  A bit of a letdown after the grandeur of the palace, the haveli has by no means been brought back to the level of its former glory, but it is  a good example of wealthy homes in Udaipur at that time. One lonely guard watched as we wandered through the halls.

Its museum houses some esoteric exhibits, including the world’s largest turban, weighing in at 30 kg., measuring 151″ long and 30″high. The photo doesn’t do it justice – it looks less like a turban than it does any number of disgusting things, but interesting  for folks who like the “world’s largest, biggest, tallest, etc.” sort of attractions. 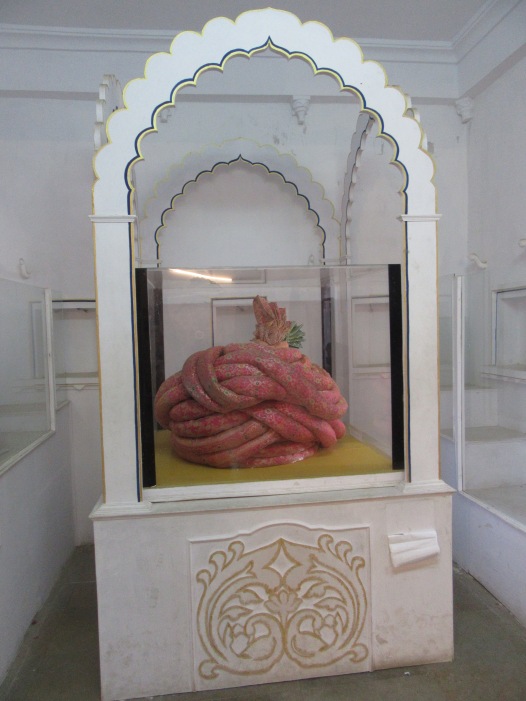 We noticed this plaque with a quote from Mark Twain’s 1897 book Following the Equator, based on his travels through India. In pure Mark Twain fashion, he nails India in this passage. And in all that time, so little has changed. 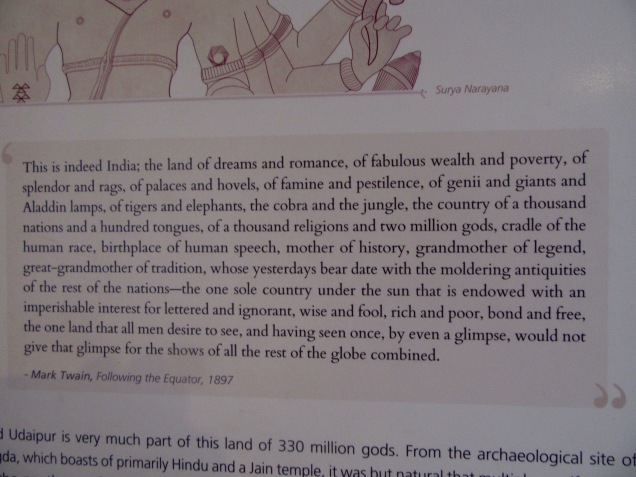 One final tourist-y thing – the Jagadish Temple – a stunningly carved multi-storey structure. As we entered, we noticed about a dozen men sitting along a wall, being fed lunch. They were obviously very poor and I wondered  if the temple feeds citizens every day. Hopefully that is the case.

A close-up of the carvings:

Boat rides on the lake are hugely popular – we took one last night for sunset, joining a large tour group of British high school students who spent the entire time checking their phones, gossiping about their friends and snogging with their boyfriends. It’s so funny – so often the field school is a good excuse to get away from parents, with the destination being a secondary attraction.

We did not snog, and paid attention to what we were seeing. 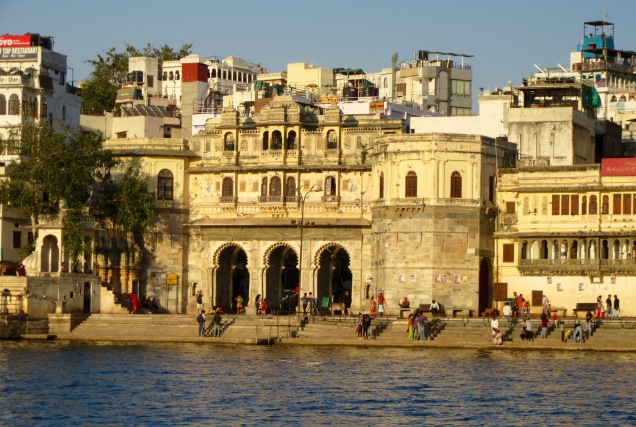 Jagmandir Island – a hotel, restaurant and bar – open to visitors.

Art take many forms in Udaipur – from wall murals:

To these whimsical and beautiful designs that decorate many a doorway. They are all variations on a theme – horses, elephants, maharajas, etc. and appear to be the work of one artist.

We believe they must be stencils, but this young man Ricky claimed to be the artist for this one. 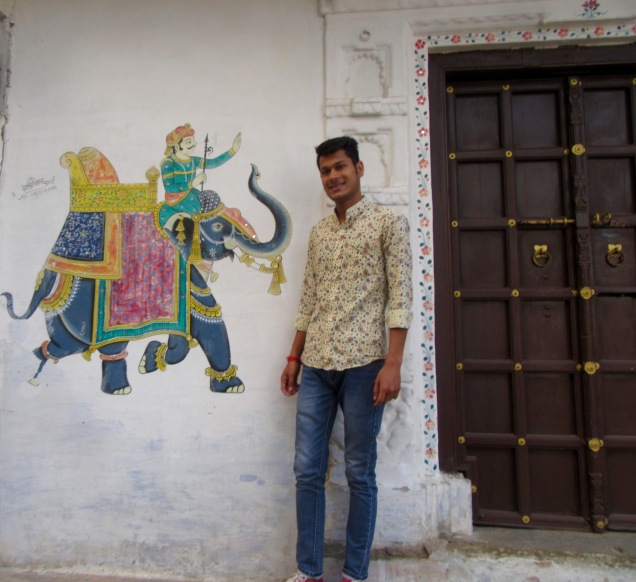 Udaipur is crawling with artists and art classes – many of them are classes in Mughal  miniatures. Every second store carries similar pieces of art and the artists all claim that a single piece takes them 20 hours of work, yet they charge just $6 or $8. It is hard not to be a little skeptical, since the price does not reflect the effort and the effort appears to be identical from one shop to the next and available in massive quantities.

We are splashing out a little tonight – having dinner at a fancy restaurant on the water’s edge. We want to celebrate our last night in Udaipur – the most romantic city in India – in style.

Next up – Jodphur – the Blue City, home to a huge fort and birthplace of those unique riding breeches.

16 thoughts on “Udaipur: The Most Romantic City in India?”