Dawson City was the epicentre of the Klondike Gold Rush; the stampede for riches that lasted from 1896-1899 and transformed the town forever. During that brief, glorious period, the population rose to over 40,000 and then plummeted once the gold disappeared.  Today the population stands at just over 2,000 people; largely made up of hardy individualists who have helped create Dawson’s distinct character.

One of the most notable residents is Caveman Bill. He arrived in Dawson 23 years ago, and after searching around for a suitable home, settled upon a cave on the opposite side of the Yukon River. Bill is neither a hermit nor a weirdo – he is a skilled woodworker who   has simply found an alternative lifestyle that suits him.  He lives in the cave for most of the year and when the river rises in the spring, he moves his belongings out of the cave and up the hill until the cave is dry again.  Bill’s cave is hidden from view to the left of the canoes, behind the bushes. If you look to the top left of the photo, you’ll notice a bench. This is where Bill lives in the spring, during the thaw.

We met Phil LeBlond, a bike mechanic who splits his time between Dawson and Whitehorse.  In addition to bike repair, Phil operates The Purple Bike Project out of a refurbished school bus (also his home), which offers extremely reasonable bike rentals. We had an engaging chat with him, during which he extended his views on Trump (unprintable), Whitehorse government ( also unprintable), and on the disturbing state of  boys who would rather play video games than ride bikes, “they have no testicles, I feel sorry for the girls.” 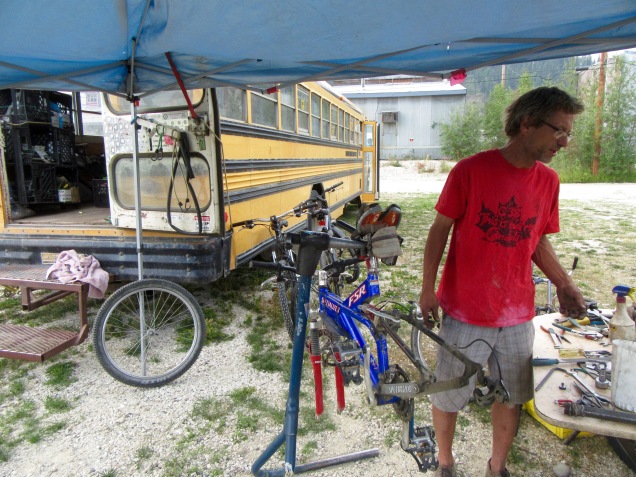 It seems to me that anyone who survives relative isolation, -50 degree winters and hordes of mosquitoes is likely to have strong opinions. That is part of the charm of Dawson residents – they are pretty chuffed about being a sourdough (one who has lived in the Yukon for a winter). If you’re just here for the summer, you are a “cheechako” – not fully broken in. If you are not in the Yukon, you are Outside, with a capital O. Still, there is very little attitude – Yukoners are extremely friendly and approachable – if you want to be part of this club, you’ll be welcomed.

We met Jane because we were gawking at her house, and then noticed her standing on her side porch. Jane’s a cheechako – she spends winters in Toronto and rents this house for the summer. She told us the house was built by David Suzuki’s son and invited us in to have a look at the craftsmanship – pointing out the four-inch wooden doors and the clever spacious layout. 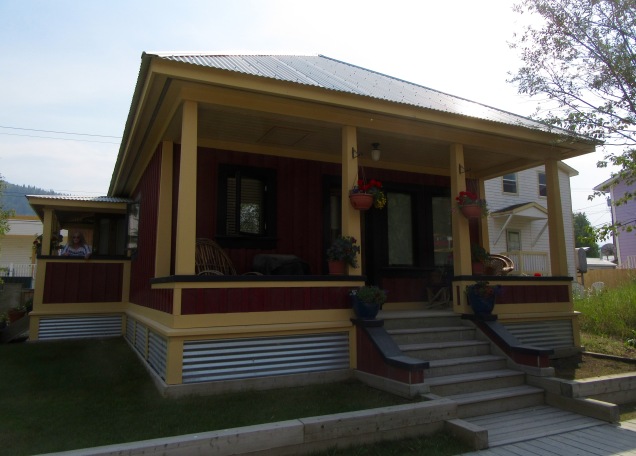 Dawson is an intriguing mix of lavish and modest, old and new, gussied-up and falling-down; all authentic. The roads are hard-packed dirt and the sidewalks are wooden – in part due to the extremes of weather, and in part as an homage to its origins. 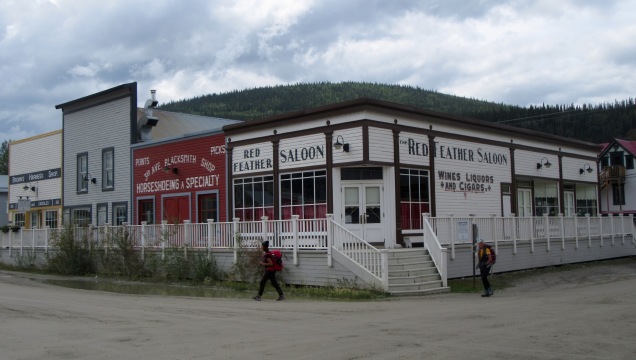 These stylish buildings date back to the few short years of the Gold Rush – examples of the tremendous fortunes of that time. 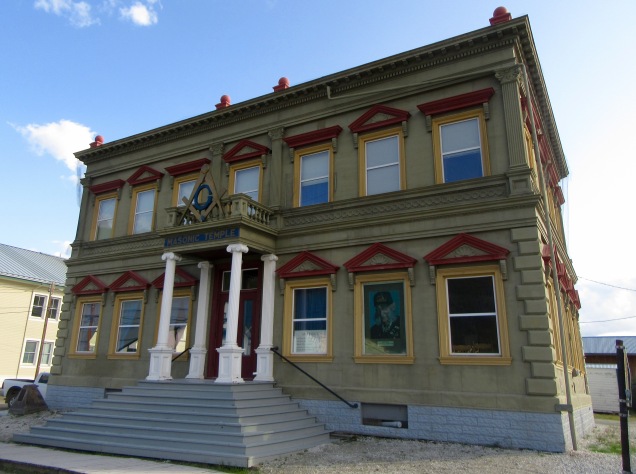 Simple log cabins are just as much a feature of Dawson, and the originals are still to be found throughout the town.

Interestingly, businesses that appear to have been closed for some time have not been torn down. They are still standing, like museum relics. 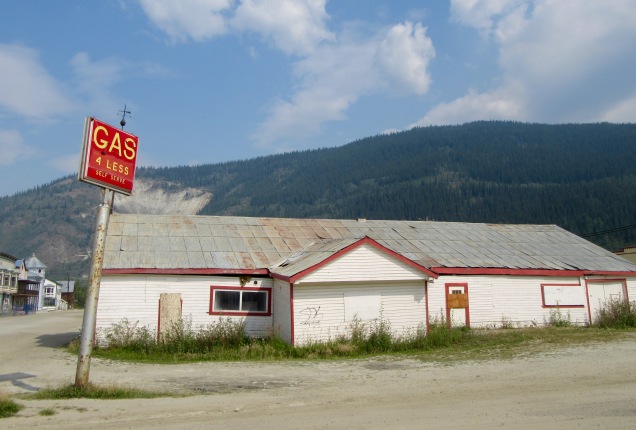 Front Street runs along the river, with storefronts on one side, and a pretty riverside walkway on the other.

We took a walking tour with the entertaining Justin, who was in charge of telling us about Dawson’s bizarre tall tales.

In 1955, Quaker Oats started a marketing campaign tied to the popular radio show “Sgt. Preston of the Yukon” that included a deed to Yukon land in the gold rush area – just one square inch. These “deeds” were included in packages of cereal – 21 million in total. Since the deeds were never registered and the land tax never paid, the deeds were worthless, but to this day, Yukon officials receive inquiries about them.

Further along on our walk, Justin pointed out the oldest bar in town, affectionately known as “The Pit.” “Every character in Dawson winds up in The Pit sooner or later – it’s a great place to meet the locals.”

The bigger bar story in Dawson is the Sourtoe Cocktail. Legend has it that in the 1920s, rum-runner Louie Linken froze his toe, amputated it himself to avoid gangrene, and popped it in a bottle of alcohol. Fast forward a few years and this dehydrated toe was discovered and became the inspiration for The Sourtoe Cocktail Club. To become a member of the club, you must purchase a shot of whisky with the dehydrated toe popped in (no longer the original toe – there have been a few donations since then) and down your drink, kissing the toe. If any of us were considering trying this Dawson tradition, Justin put us off with this story. “My friend was the bartender at the Downtown Hotel and one day the toe fell apart – it was all soft and moldy inside, so he just glued it together and let it dry again.”J

Dawson City has permafrost that measures 60 metres thick and is thousands of years old. Dawson’s permafrost is vulnerable to thawing, and once the ice melts the ground loses volume, surfaces drop and buildings tilt. Any newer buildings are now set on wooden cribbing.

What is remarkable is the fact that the city has left a few older buildings that have “tilted” as historical examples, rather than tear them down. 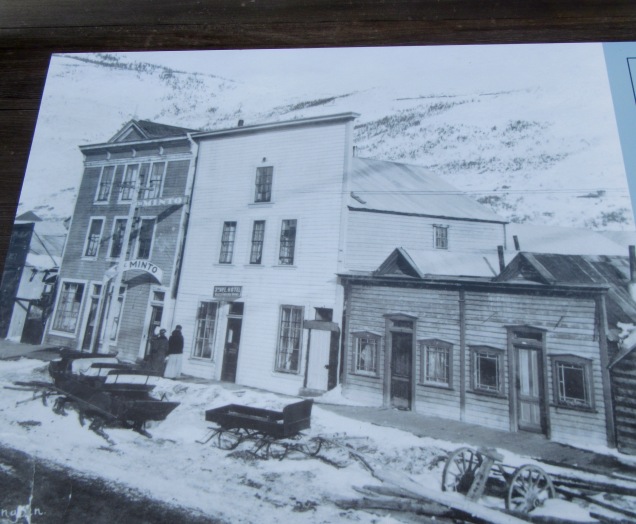 Dawson is set on the confluence of the Klondike and Yukon Rivers and in its heyday, there were over 250 paddle wheelers travelling between Dawson and Whitehorse. Today, it is possible to board the Klondike Spirit for an hour and half excursion up the Yukon River. The boat in the background is the small George Black ferry that carries vehicles back and forth to the west side, which has a small off-grid community, a golf course, campground and the road to Alaska.

We hopped on that ferry one day for the two-hour scenic Top of the World Highway to the Alaska border. The ferry carries just eight vehicles and in summer with the huge population of RV-ers, there can be significant waits. 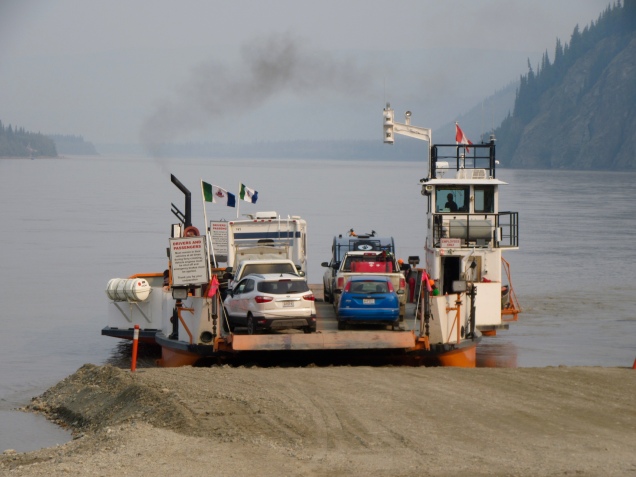 Dawson had been experiencing a lot of smoke from the nearby Mayo wildfire, so we began our drive with hazy skies and poor visibility. 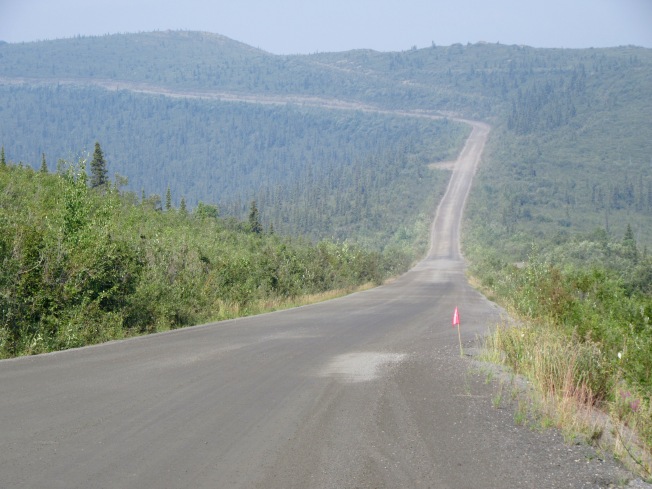 Luck was with us – in about 20 minutes the smoke disappeared and the views were spectacular.

Well-graded gravel roads, twisty turns and the road to ourselves – a dream drive. 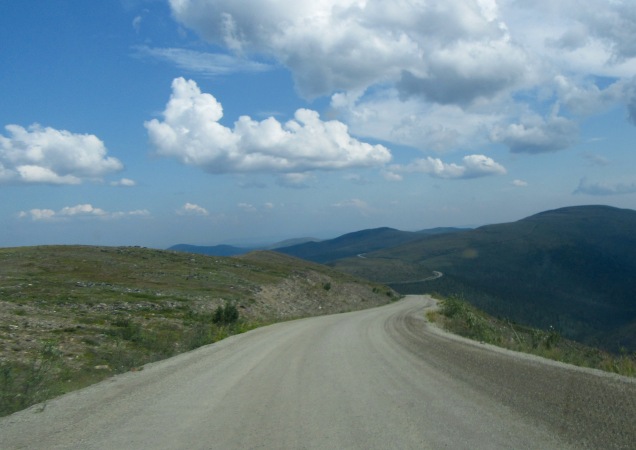 We had our eyes peeled for animals but did not see a bear, a caribou nor an elk – just one lazy old porcupine waddling across the road. That has been our lot so far in the Yukon – the animals are there, but we’re not seeing them, probably because the land is so vast and there are so few roads. We saw one confused moose dart across the road and then back into the bush, but that’s been it.

Back in Dawson and it’s time for Diamond Tooth Gertie’s. The building that houses this historic casino/dance hall has been around since 1901 – named after an infamous dance hall queen from the 1920s who had a diamond implanted in her front tooth.  Today Diamond Tooth Gertie’s is far less risqué –  catering to the bus tour crowd with dinner specials, slot machines and nightly CanCan shows. We popped by for the show and it was saucy and fun.

The “madam” entertained the crowd between dance sets with her songs and banter and when the show was over, the girls came out for photo ops. I encouraged my reluctant husband to pose for a photo, but he looked so rumpled and  startled that we both agreed this photo (with its more willing subject) was a better bet.

There is so much to see and do in Dawson and surrounding area that we should have planned on staying another few days.

Just south of Dawson is the infamous Dempster Highway. This much-hyped road can live up to its fearsome reputation if care is not taken. “No gas for 370 km.” “Bring not one, but two or three spare tires.” “Road turns to clay in the rain.” All of those statements are true, but it is not a reason to stay off this road. “Just go slow,” was the wise advice of a park ranger and that is exactly what we did.

We did not drive up to Inuvik, as we had thought to during our early days of planning this trip. We settled instead for driving through Tombstone  Territorial Park – about 72 km. from the start of the Dempster Highway.  Tombstone is a park of staggering beauty – much of it above the tree line. The mountains and landscape are like nothing we’ve seen – lunar and other-worldly. The dramatic clouds added greatly to the mood.

We stopped first at the Tombstone Interpretive Centre to find out about road conditions (fair) and nearby hiking trails.

Since they are over 100 km. from town, park staff  work eight days on and four off. These are their cabins. They live in a painting.

A view of Tombstone Mountain – that jagged peak in the middle of the distant range.

We stopped for a 4-km. hike up to a ridge, with each view more awesome than the last.

We can say we drove on the Dempster Highway without mishap, but another trip we would plan better and drive straight out to the Arctic Ocean.

Dawson and Tombstone Park have been highlights so far. Next stop – Whitehorse for a few days to clean up, regroup and stock up on supplies before heading to Kluane.