“Same-same but different” is a phrase that is ubiquitous in SE Asia, and its meanings vary depending upon the speaker. A vendor trying to convince you that the North Face jacket is not a fake, or a chef trying to explain the taste of a tropical fruit you can’t find at home – same-same.

In my case, same-same but different means this posting about Hanoi will be similar to the last one – more stories and images about people and places that have touched our hearts. Hanoi is a city we can’t get enough of and yet it is so exhausting and all-consuming we are finally ready to head home.

The next two photos tell a sad story – legions of young and middle-aged men who seem to have little to do. We see them gathering in groups like this or sitting on their motorbikes, checking their phones. What becomes of a country that is emerging into a new level of prosperity if so many are left behind?

This game is popular – we see it on street corners and in parks, being played by men at all hours of the day. We noticed money exchanging hands with this game.

These little kids are Vietnam’s hope for the future.  Rock, paper, scissors is apparently an international favourite. 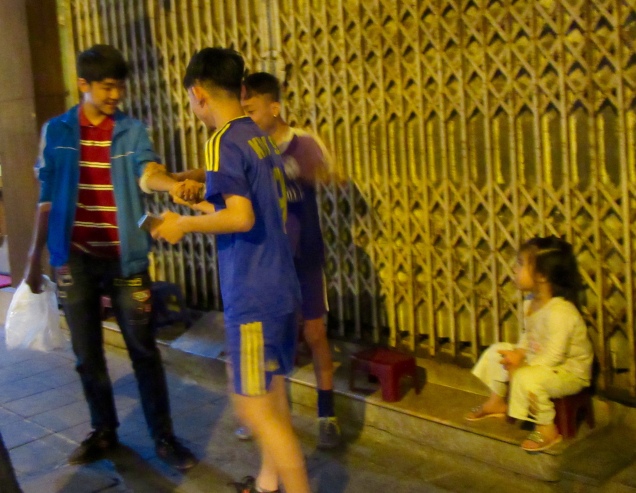 A young man playing the violin in the park by the lake. There are not a lot of buskers, which we found surprising.

The dancers, on the other hand, are out most nights. There are traditional dances and small performances and then there is the dance-off. It seems to be open to anyone who wants to get up and twirl around. The kids were certainly up for it, and there were a few couples who appear to have had some practice. Smiling not allowed.

The lake is quite close to our hotel and is a magnet for night-time entertainment. There is a gorgeous restaurant that offers outdoor lakeside seating, and as is the strange case of so many restaurants of its ilk, it has a great view and mediocre Western food – soggy pizza and limp fries. We snagged one of the front row seats and ordered (expensive warmish) beer.

Speaking of food, we had an exceptional meal at Don’s Bistro, situated on West Lake, a much larger lake just north of the Old Quarter. Don is an expat chef who happens to be a dear friend of a friend, and so we popped by for lunch, a visit and a bike ride round the lake.  Don’s Bistro has been around for a number of years and is the go-to place for locals and tourists alike when they want a bit of a treat meal, as it overlooks the lake, has stunning decor, flawless service and is still very affordable.  As is often the case when I have beautiful food put in front of me, I get so excited I forget to take photos. I did remember to take a shot of our desserts.

After lunch, we borrowed two of Don’s vintage Japanese postman bikes and rode around the lake – about 17 km.  The first part of the ride was through ex-pat neighbourhoods and nicer homes. This is one of the few places in Hanoi you can ride a bicycle and not encounter much traffic. 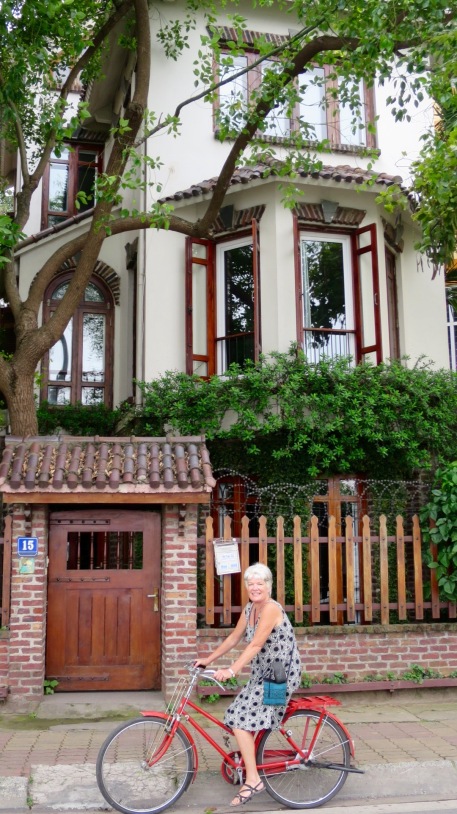 And now for some random shots of buildings. There are many really gorgeous buildings in Hanoi, but they are often partially blocked by high fences. I was able to take several unobstructed shots of very interesting buildings and homes in Hanoi, and initially they will appear to be shabby, but they are the heart of the city.

This is an example of a Vietnamese and a French colonial roofline. The French (on the right) has high windows and carved embellishments. The Vietnamese has a low roof and tiny window. Apparently, this style developed because citizens were not allowed to look at the King when he passed by, so they built these tiny windows so they could sneak a peek without being detected.

Many buildings are narrow and tall – built that way to avoid paying higher taxes (smaller footprint); resulting in some fanciful structures. We’re wondering – one flat to a floor? Two? I would love to go on a house tour in Hanoi, if there are such things. As is the case with so many densely populated cities, so much is hidden from sight and drab doors open up to reveal surprising beauty.

Not a lot surprising beauty here, I wouldn’t think. 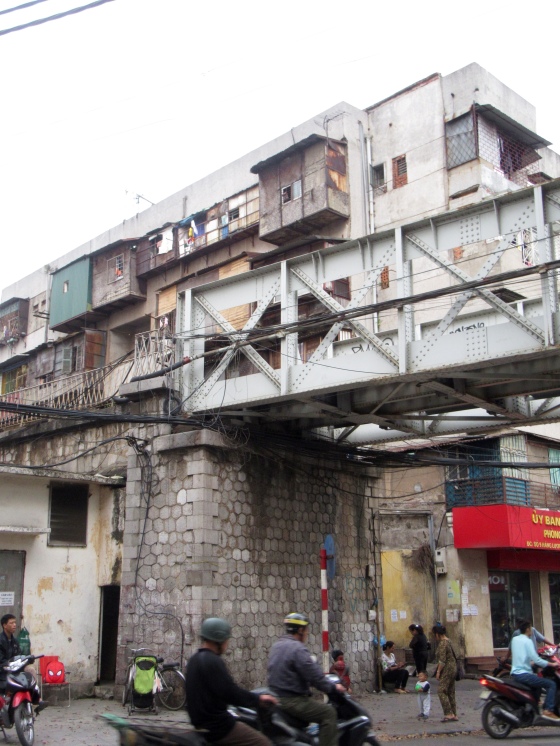 A banyan tree, common to SE Asia, among other countries. So beautiful.

We took a walking tour of the Old Quarter with two students who were practicing their English. The Old Quarter began as the merchant area (still is), with 36 guilds. Over time, the guilds have changed, but the streets are still representative of certain trades and services, which makes shopping very practical.

On Tin Street, our guides told us about the furnace-type objects sitting on the ground. They are used to burn fake money to send to their deceased loved ones. This will help them out in the afterlife.

The students were very sweet and tried very hard, but English was still as struggle for them. It didn’t matter – they pointed out a number of things we wouldn’t have known about, including the herbal medicine street. It used to be run by Chinese, but when they fled after the war, the Vietnamese took over. Fascinating, although I could not find anyone who spoke English, so buying a big bag of herbs would be out of the question.

The fruit vendors ride around on bicycles and carve pineapple right in front of you. A whole pineapple for just over a dollar,  and carved in a spiral in about a minute.

Pay close attention to the size of this street – it has to do with the next photo.

Let’s pretend you own a Bentley. You know, the car so exclusive it goes by one initial. If you owned a Bentley, would you honestly drive it through the tiny streets of The Old Quarter, with hundreds of motorbikes, bicycles, cars, delivery trucks and grubby tourists brushing by it? Well, if you had a Bentley it probably comes with a driver, but still… So you can imagine our surprise when we turned a corner and came upon this sight.
At first we thought, “must be a knock-off”. I don’t think so – even the Vietnamese aren’t this talented. So why is a Bentley parked in the Old Quarter? Another imponderable. 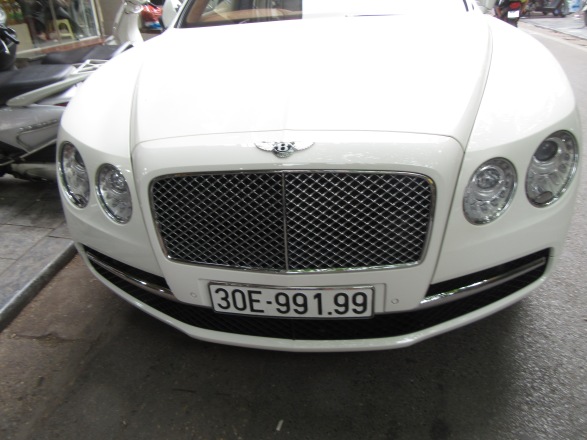 Still in the Old Quarter, we came upon this funny little bar – Hang-Over. Aptly named, I’m sure, as this is the ‘hood for 50 cent beer, but the mother in me reacted right away. “Young people, do not get a tattoo or piercing in a bar called Hang-Over. That approach to over-drinking may extend to the tattoo “artist” and you’ll be sorry.” 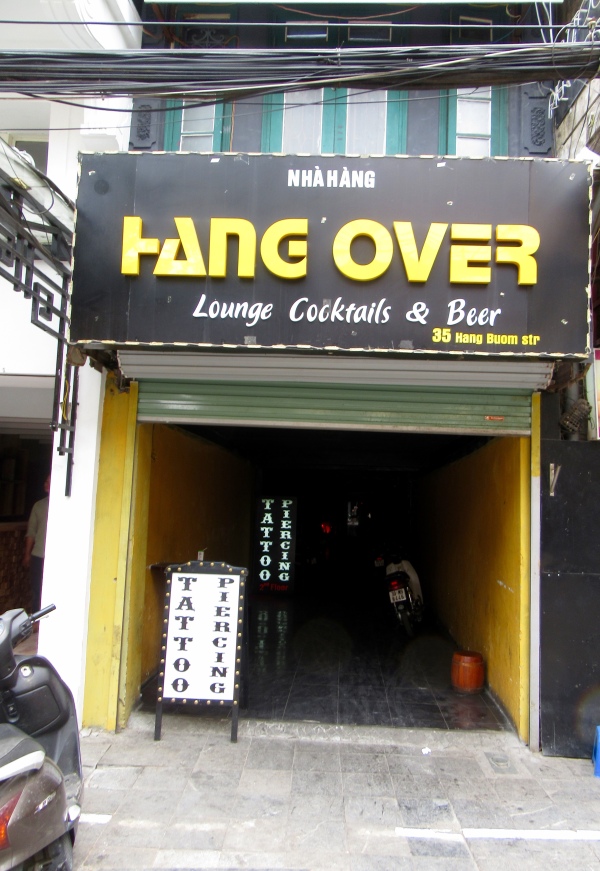 Weddings here can be elaborate affairs that require pre-wedding photos, well in advance of the actual date. Today, we saw not one, but two pre-weddings – one of them photo-bombed by a little kid on a bike.

Our trip is over. So many more stories and photos left on the cutting-room floor, but it is time to go now. At least for the next few weeks. We’re flying out tomorrow, and will spend the next five or six weeks in B.C.,  seeing dear family and friends again. After that, we’re on the road again – driving across the country in search of big Canadian 150th birthday stories, and hoping that not every campsite and motel room has already been booked. I’m sure we’re not the only ones with the same idea.

We’ll see you back on the blog mid-May, and hopefully see many of you face-to-face over the next several months.

Thank you so much for coming along with us, and for your emails and blog comments. It meant the world to us. See you soon!