We had never spent much time in deserts before – just drove through and gazed out the car window at scrubland and tawny hillsides without understanding what we were looking at. After Death Valley, with its negligible vegetation, and Joshua Tree, a little lusher and now Anza Borrego, lusher and more varied still, we’re beginning to get a picture of how different deserts can be. This desert may be our favourite.

But, and this is a big but – you cannot see this park fully without a 4×4 vehicle. Many of the roads are dirt and many of them have spots of deep sand, so we were limited to just a handful of trails. We did have the chance to play at being off-roaders a bit, but it was disappointing to know we were leaving some fabulous trails and scenery behind. The hiking trails are very well marked for vehicle access, so there is little chance of getting stuck. 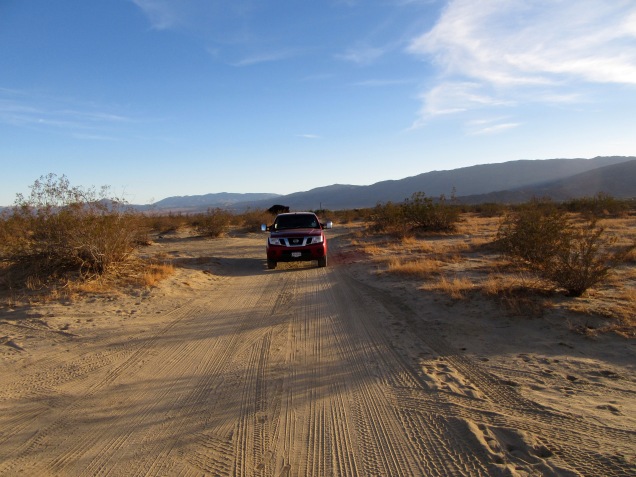 Anza Borrego is California’s southernmost park – we are just two hours to the Mexican border. It is also the largest state park outside Alaska – at 500,000 acres. It draws people for many reasons – as we were entering the outskirts of the park, we came upon dozens and dozens of ATVs bouncing over the terrain – we could easily imagine our own sons tearing around that landscape.

Once in the park, the main activities are hiking and cycling as the terrain and animals are protected, so off-roading is prohibited. The town of Borrego Springs was an unexpected little jewel, with a lush green roundabout whimsically called the Christmas Circle.

There are a number of restaurants in town, but this one caught our eye because of the sign. You know a place has been around for a while when they are still offering “char-broiled steaks.”

We really enjoyed this place – The Red Ocotillo. Food was fantastic, decor very southwestern, and service saucy (remember Carla from Cheers? That was our server.)

We stopped by the Borrego Art Institute – a gorgeous building with artful landscaping and plans for a garden out back to service the adjoining restaurant. They offer art classes, talks, and shows with local artists.

The town is about two weeks away from the grand opening of their new library.  There has been some controversy over this building apparently. One of the locals confided that the new library was “towering” over the rest of the town, and built high on stilts, which was sure to attract nesting animals and possibly trap children. We were expecting a skyscraper. It is amusing to see how every community has its intrigues! 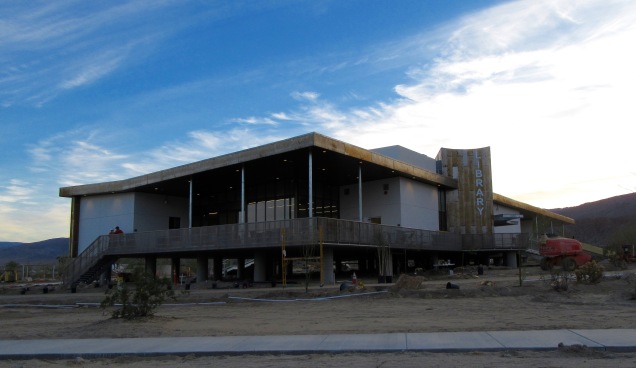 I am writing this outside the old library (which does not open until noon), so I’ve joined the ranks of the wifi-deprived, all of us lined up outside with our devices. We have really come to depend upon libraries as we travel and appreciate all they offer – great wifi, clean washrooms, the chance to sit for a few hours without feeling guilty and also the chance to get a feel for the locals. We overhear some fascinating conversations. It is a tremendously reassuring place to be in and feel part of the community, even for a short while.

While I write this blog, Stephen is doing laundry at this picturesque laundromat.

Our campground – set into the hills – quiet and magical. 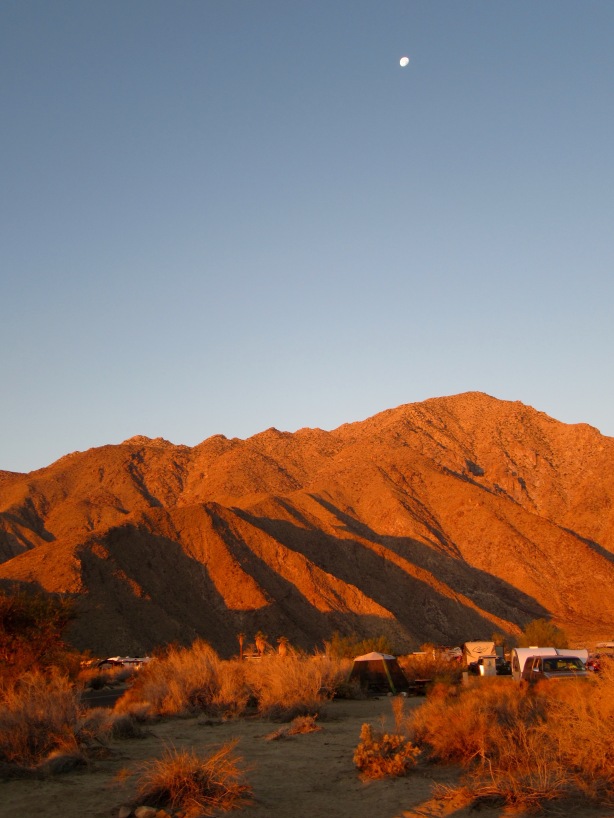 The sun woke us up every morning around 6:00 am.

And gave us a show each night. Our other show was the night sky – Anza Borrego is a designated Dark Sky area and particularly a draw in June when the Milky Way is visible. We were happy to sit out bundled up, with our necks craned, just enjoying the view and the quiet. 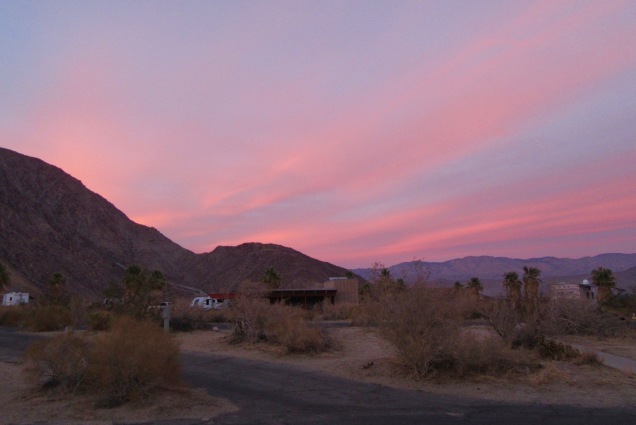 One of our favourite hikes was the three-mile Palm Canyon hike – back into the mountains, leading to a palm oasis. 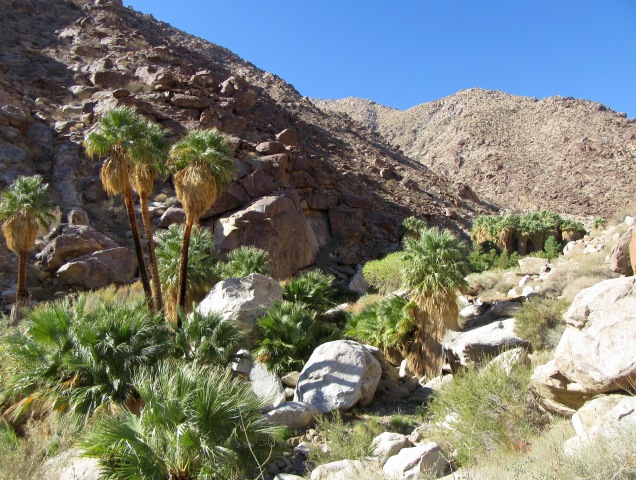 These are California fan palms – the only palm trees native to the region, and where they grow in clusters means they are growing along a fault line, where there is water.

We met up with a father and son from Saskatchewan, also finding refuge in the oasis. We  noted the protective fronds on the trees, evolved to capture and hold moisture.

We also commented on the numerous droppings on the ground, filled with seeds and canine-like in shape. Soon, our perpetrator presented himself – a charcoal-coloured little  fox with red tip on tail and face. He peered at us from his perch and then took off again, but I’m sure he was watching, waiting for us to leave his home.

This is a fuzzy shot, but if you look closely, you will see the little fox  at the base of the  tree on the right.

We were really hoping to see Bighorn sheep – the endangered animal after whom the park is named. Borrego is Spanish for sheep. This park is their territory, but at midday, they were nowhere to be found.  On our way back down, a local woman told us to go to the golf course the next morning – we would be guaranteed to see them as they make their way down the mountain to feed and drink on the corner of the golf course.

After watching them for a while, we headed back to our truck and that is when the show began. At least another couple of dozen sheep were descending down the mountain and we hid out behind our truck, so we wouldn’t alarm them. 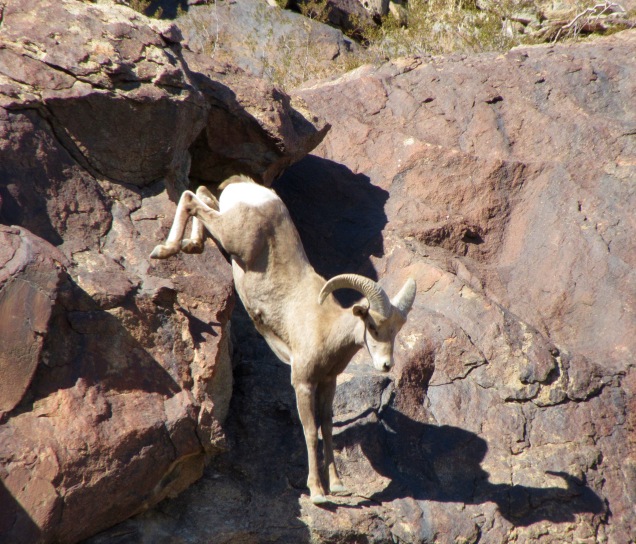 This sheep was one of a few we saw who were collared and tagged, and since the herd now numbers 600, they are obviously monitoring to make sure they stay healthy and grow in numbers. 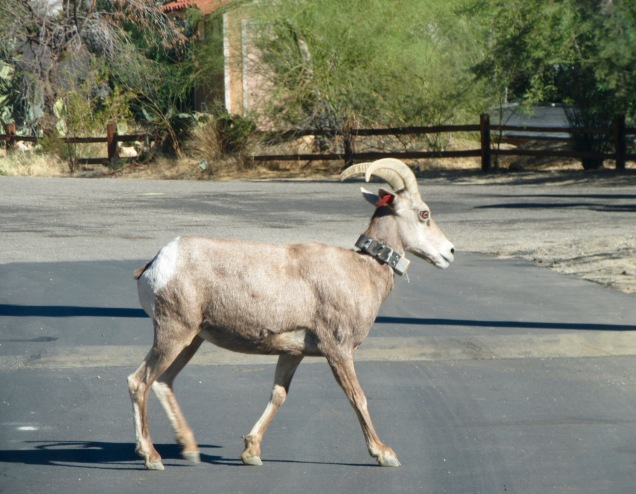 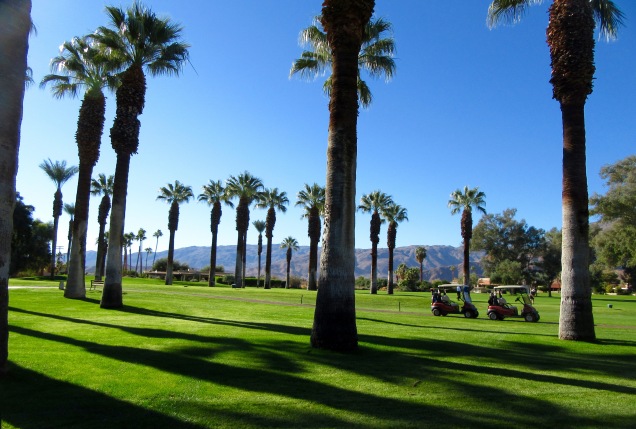 …and some of the beautiful homes and gardens around the course.

We had never heard of a slot canyon before, so decided to give it a try.  This one began easily enough. 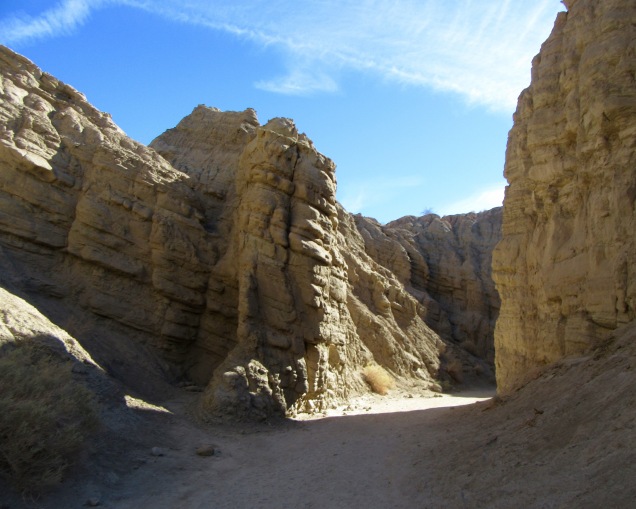 Then started to narrow a bit, with rather menacing rock overhangs (one good tremor…)

And then things got interesting:

This is not a canyon that is for everyone. If you suffer from claustrophobia, you will have a couple of queasy moments (just look up to see the sky). Not to put too fine point upon it, but this canyon is not suitable for all body types.  We met up with another couple and walked through with them. None of us are large people, but at one point, we all had to turn sideways and squeeze through.

Back to the parking lot, looking out over  the badlands. They give no clue as to what lies below, which is such a big attraction to the desert – so much of its charm is hidden in plan view.

And finally, is this what you would expect to find in the middle of the desert? 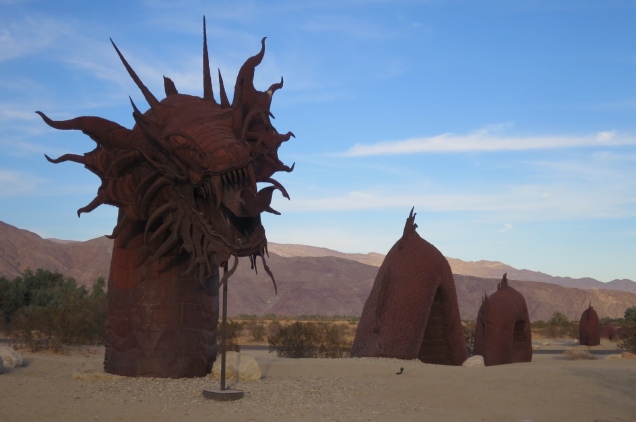 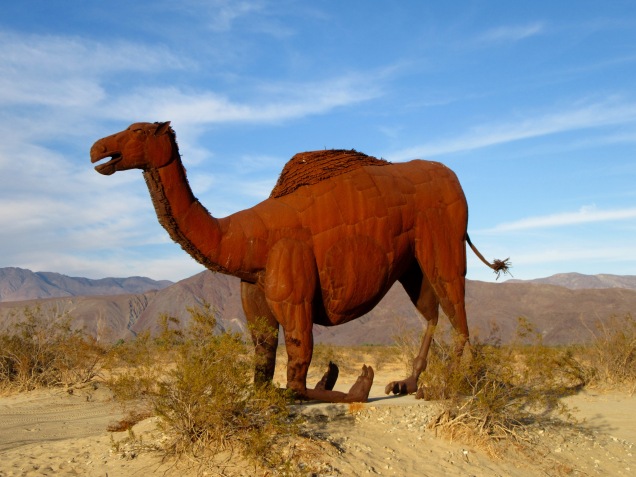 What is this creature?

And back to the beginning – come to Anza Borrego and bring a jeep. 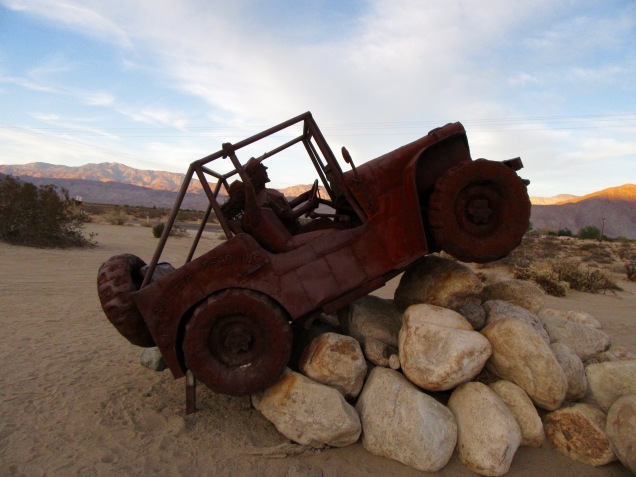 This work is the brainchild of metal sculptor Ricardo Breceda, and thanks to the vision of town benefactor Dennis Avery, they can be found all over Avery’s private land, known as Galleta Meadows. It is an extraordinary sight to drive along and see dozens upon dozens of these giant sculptures – camels, birds, tortoises, prehistoric creatures. Somehow they blend right into the landscape.

The other must-see of Anza Borrego are the spring wildflowers. Two years ago they had a “Super-bloom”, an infrequent occurrence that produces flowers of vivid colour and waist-high abundance. We were told there were over 300,000 visitors here to see the spectacle.

We leave this glorious place reluctantly, but will be back again in the spring.
Tomorrow… crossing the border into Baja. We will be crossing at Tecate, not Tijuana, so hopefully our passage will be smooth.