We used to regard RVs and their snowbird drivers as a blight – traffic-obstructing, view-obscuring behemoths that clogged up highways and hogged parking spaces. We would drive by a 40-foot coach hauling a small car, and smugly comment, “their gas bill must be a killer.”  Then, our reality struck. After a cross-country trip last summer, we put our tent to the test, and it failed time and again. Gale force winds in the grasslands, rain-outs in Newfoundland, obnoxious music in places too numerous to count and an air mattress that refused to stay inflated were all annoyances that piled on and had us questioning our resolve to “keep it simple.” Long-term tenting was no longer simple and no longer fun.

It was when we started to plan our North American travels that we began to rethink our options. Alaska, the Yukon, Yosemite, Grand Canyon, the Everglades – over the next few years we hope to visit as many national, state and provincial parks as possible.  After a bit of research, we discovered a common denominator. Cabins and motels in more remote areas are limited, mediocre, over-priced or all three. To be able to truly experience parks and wilderness meant we would have to bring our accommodation with us.

And the search began. Since we have no home (with driveway), it ruled out a motorhome of any size. Our truck goes where we go, and since it is too small to support a truck camper, we began looking at small travel trailers.  A tent trailer? An A-frame? No, on both counts – a bathroom, or at least, a toilet was a must-have. We roamed the RV lots and became more and more discouraged. Most RVs are made in Indiana, and there has been such an explosion of sales in recent years that quality is hit-and-miss. Searching online reviews was illuminating. One very popular brand even has a Facebook site devoted to “haters” – a litany of complaints about shoddy workmanship, poor warranties, leaks, mold, etc.

We almost gave up, and then we discovered Escape Trailers – lightweight fibreglass trailers made right here in British Columbia – in Chilliwack, about an hour east of Vancouver. Their business plan is simple – they build on demand, and potential buyers are able to inspect models from a list of Escape owners in their area. We saw two models on Vancouver Island – one in Qualicum Beach and one in Nanaimo, and both owners were effusive in their praise for everything about their units. The resale value on the Escape Trailers is close to full price and the demand is high. We were sold.

This is the unit we chose – the Escape 21-foot trailer.

Our trailer has a double bed, 3-piece bathroom, U-shaped dinette, 2-burner stove, and tons of storage. As our trailer was being built, we received weekly updates and photos, making us feel like expectant parents receiving ultrasounds. These are two of the final photos before we took possession. 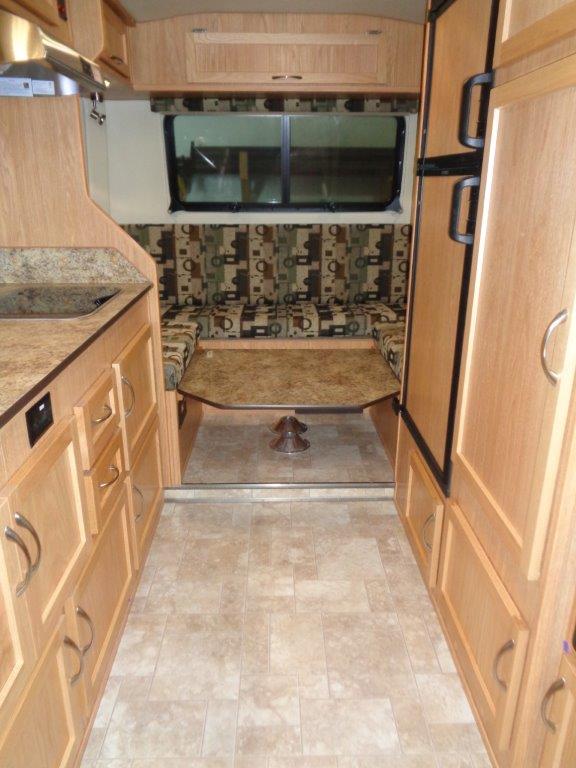 We didn’t think hauling a trailer would be necessarily easy, but we were up for the challenge. We read the manual in advance, watched the video and arrived for our three-hour orientation feeling pretty chuffed about it all. That soon disappeared as the mountain of information began. “Drain black water first, then grey water.”  “Top up battery with distilled water.”  “Check surge protector monitor.”

Good grief. We had booked three nights at a nearby campground to practice driving,  hitching, unhitching and the dreaded backing up. Were we ready to bring this baby home and look after it properly? I have distinct memories of bringing our first son, Alex home from the hospital, and not having the foggiest idea of what to do with him. Was he bored just lying there looking at us? Was I allowed to leave the room?  Alex took care of that foolishness by doing what babies do and we followed his lead. Somehow our trailer experience was taking on that same sense of ineptitude.

Our campground hideaway gave us the time we needed to calm down and educate ourselves.  Many people walked by and stopped to talk – admiring the trailer, giving us advice, encouraging us to be patient with ourselves. These kind people did wonders for our state of mind and busted my snobbish notions about trailer parks.

And finally, we were ready to leave – heading down the highway to the U.S. border crossing just 20 minutes away. The trailer just followed along behind us, and as we discovered we could drive at full speed and even change lanes we began to gain confidence.

Our border crossing was a breeze – no questions about our marijuana use or political affiliations, in fact not even a query about fruit and vegetables (I left two offending oranges behind on our picnic table).

We sailed down some backroads that we had nearly to ourselves and stopped to take photos. We were doing this! Our trip had begun!

The bucolic autumn countryside disappeared once we hit Seattle on the I-5 and then crawled, crawled, crawled through that city’s perpetually nasty traffic. Our first stop for the night was Olympia, and we were just five minutes from our campsite when we stopped at a Fred Meyers (large American store), to pick up some groceries for dinner.

The parking lot was jammed with people and surprisingly small for such a large store. Too small, as it turned out, for our trailer. This was the very upsetting result – a broad scratch across the middle of our trailer, with our door jammed and  a chunk out of the fibreglass finish. 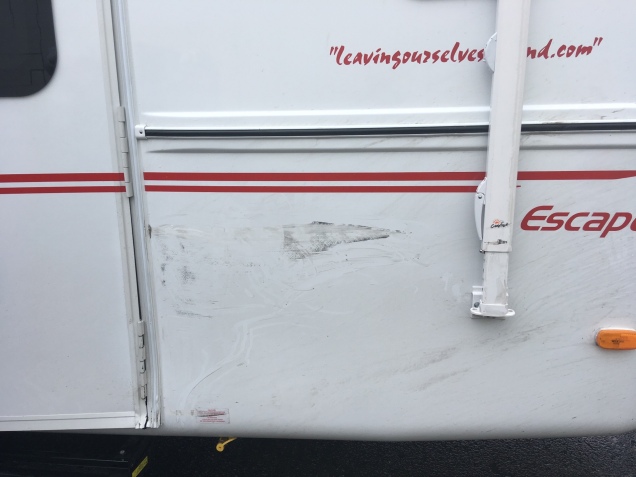 Needless to say, we were in a state, but since the damage was limited to the body and did not affect drivability, we made our way over to a motel, and began to figure out our next plan of attack. Dinner. A bottle of wine. An uneasy sleep, and then up at 4:00 a.m. to begin the 6-hour drive back to Canada and back to the Escape factory.

They couldn’t have been more considerate – they assessed the damage, told us to return later that afternoon to pick up our partially-fixed trailer (new door), and we headed back to our campground to wait out the weekend. As I write this in the Chilliwack library, they are repairing the fibreglass damage, and by mid-afternoon we will have our trailer back, almost as good as new.

Tomorrow morning we head south again, and our adventure will truly begin. We’ll be gone until early May – with stops in California on the way down (including a few days in Las Vegas to meet up with friends), two months in Baja, and a slow drive back, from Texas to New Mexico to Utah to Arizona to California. We’ll visit as many parks as weather permits,  and we’re sure there’ll be a story or two along the way.