Halong Bay was designated a UNESCO World Heritage site in 1994 for good reason. There are just a handful of places in the world that have such extensive karst formations and the ever-changing sky and temperature make it a moody and romantic destination. Our photos won’t do it justice, but you’ll get the idea.

We began our adventure with an early pick-up in Hanoi, a 4-hour minivan drive to Halong Bay, and a quick transfer to our boat, Paloma. 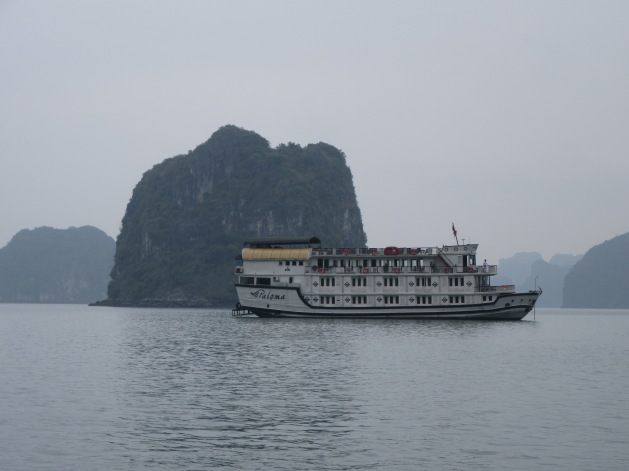 We had arrived in Hanoi and immediately booked a tour through our hotel. We had certain criteria – we wanted to plan our trip based on weather forecasts (we are about a month too early for dependable weather in that area). We read about the budget boats that were barely seaworthy booze cruises with rats running on deck and substandard food. Big pass on the substandard food.  We wanted a mid-range boat with good amenities and a small number of cabins and civilized fellow passengers.

We found them – our tablemates Emma and Jacob from Australia (at the head of the table) and Tom and Ellen from Denmark (across from Stephen and me). They really helped to make our cruise a lot of fun, but we got to know everyone on board, since we had just 27 guests. We lucked out on all counts – a great group of people, excellent staff and good weather.

The dining room view from the other end:

Our boat had an Agatha Christie feel to it – all dark wood and polished surfaces. Our room was cozy and spotless. We slept like babies, with our wooden windows opened wide to the cool sea air.

Service was exceptional – all staff spoke some English, and our guides were knowledgable and so attentive. Jimmy (on my left) lives in one of the fishing villages we visited, while Justin lives near Hanoi. They were both so sweet and as you can see, Jimmy is about 85 pounds soaking wet and as friendly as a retriever pup.  Everyone loved him – one of the Aussies even picked him up and carried him around. Justin is a bit older and a bit more reserved. We had quite a chat in the minivan from Hanoi to Halong Bay. He was open about his contempt for Trump and had a few things to say about his own country. Most people here are very careful about what they say and to whom, so it was interesting to get his perspective.

They work 16 days straight, get one day off and do it all over again. I wondered about them – both so young, working so hard, with no opportunity to have friends or a romantic involvement or a life of any kind beyond work. How do they do it and keep their positive energy?

So…to back up just a bit before I tell you about our experience. When we were researching Halong Bay, it was becoming quite depressing to read about the masses of tourists and hundreds of boats with music blaring into the wee hours and the bay filled with garbage. We so wanted to see the karsts, but didn’t want to spend all that time and money to get grumpy and annoyed if things were as bad as we had heard.

We read about Bai Tu Long Bay which is in the same body of water, with the same landscape but northeast of Halong Bay and at this point, far less tourist-y. Perfect – that made our decision easy and it turned out to be exactly as we had hoped. When our ship dropped anchor for the night, there were just 13 other boats in the very large sheltered bay. We saw the odd plastic bottle in the water, but there was almost no garbage.  We have no idea how it might have been had we sailed into Halong Bay, so I will have to leave that to someone else to report on.  We were surrounded by dramatic views; this one taken from our lower deck. 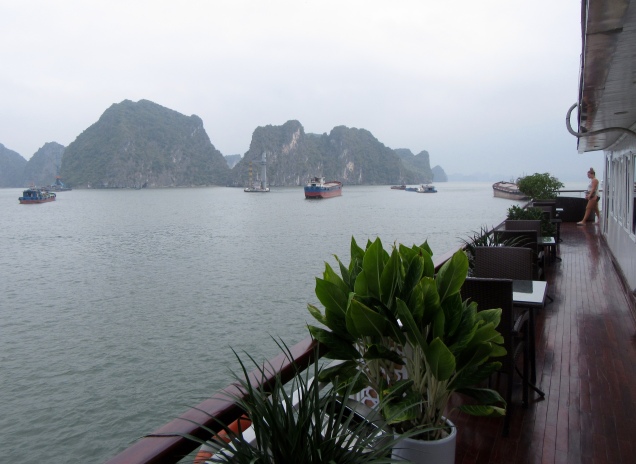 Once onboard, our guides welcomed us with a quick briefing about our itinerary and we had our first meal – a delicious multi-course lunch – before heading back down to the lower level to climb on our small boat for our first outing – to a nearby cave and beach.
The cave was fine, nothing special (said the jaded one who has seen some spectacular caves), but the sail around opened up whole other vistas for us.

Another ship who anchored near us for the night. 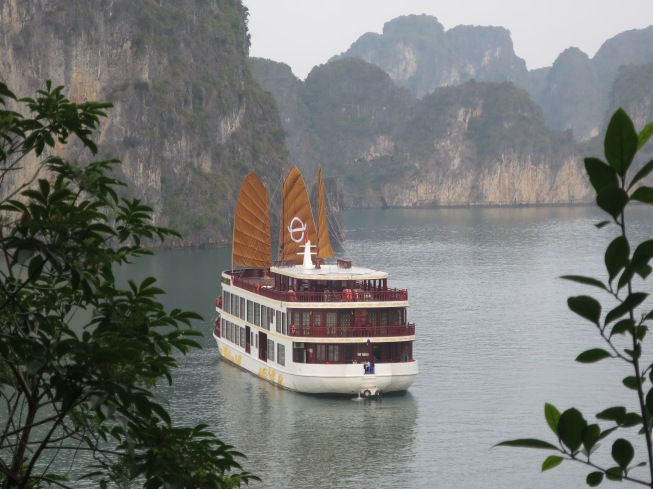 Back to the mother ship by 4:30, and we were invited to go for a swim, jumping off the back of the boat at the lower level. A number of guests took advantage of this, including you-know-who.

Those of you who have spent any time with me at Clark Bay will know that I’m a water chicken – the temperature has to be just right. So I won’t make excuses but I have to admit – all the bobbing heads in the water did make me feel like I was missing out. 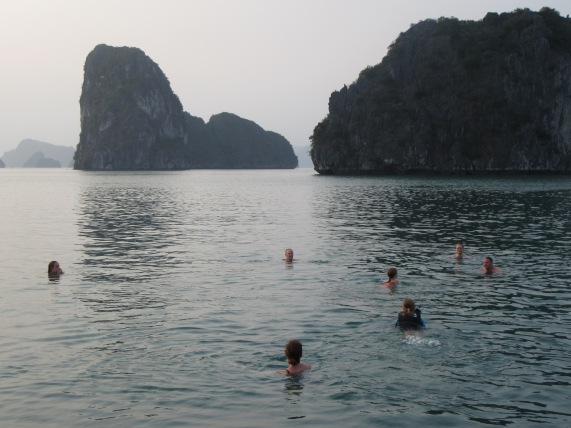 Up to the top deck  for a sunset party – we were treated to a little spread of fruit and crackers with some outrageously priced cocktails. I loved the table decorations – masterpieces carved from carrots. 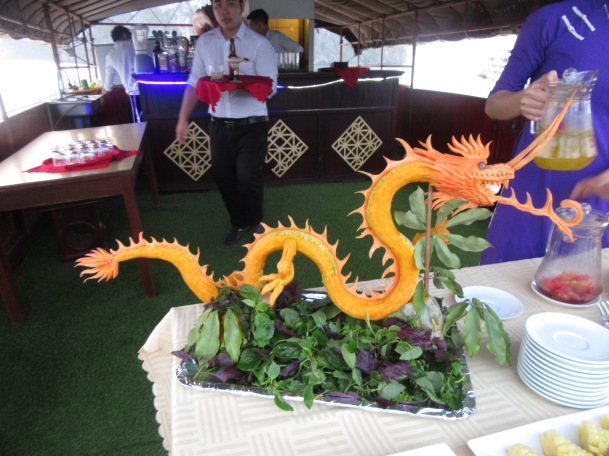 And an ambitiously endowed fisherman:

We enjoyed a delicious multi-course dinner in the dining room, but we all agreed that the beverage prices were unreasonably high. We all would have ordered bottles of wine if they had been more fairly priced.

The next day, we were up at 6:45 for breakfast and then off on our little boat for a full morning.  First stop was a floating fishing village. There used to be over 1000 people living and fishing on their boats, but the numbers have dropped to 300 and the village was moved by the government to a location away from the tourist route, which means they have a much longer trip back to port with their catch.

As we approached the main dock area, we passed by some boat homes.

And some floating homes:

Jimmy was telling us there used to be a school, but it is gone now after the move, so if there are children in this area, they do not receive an education. How can that be?  To travel through the less-accessible areas, we all transferred onto small boats, rowed by women. Our tourist dollars have changed their lives – some of them have become a taxi service, and I wonder how they feel about that. Have they entered a trap from which there is no escape?

Gorgeous views along the way:

And under a small archway that is too low for other boats:

If you’ve seen photos of Halong Bay before, you’ve likely seen images like this, with tourists kayaking underneath. As of April 1, 2017 (just days before our trip) the government pulled the plug on all kayaking in the bay. This represents hundreds, if not thousands of kayaks that are now up on shore. Tourists are disappointed, as kayaking was a big part of the trip and tour operators are frustrated but it is impossible to find out the reasons for this decision.  If our guides knew they were being tight-lipped about it and a Google search just showed a Vietnamese document stating the decision had been made.

Next stop was an oyster farm where pearls are cultivated. It was interesting – a pearl takes about three years to develop and it is quite a process. Our guide pulled up a number of racks out of the water holding various kinds of oysters – this held some of the largest variety. 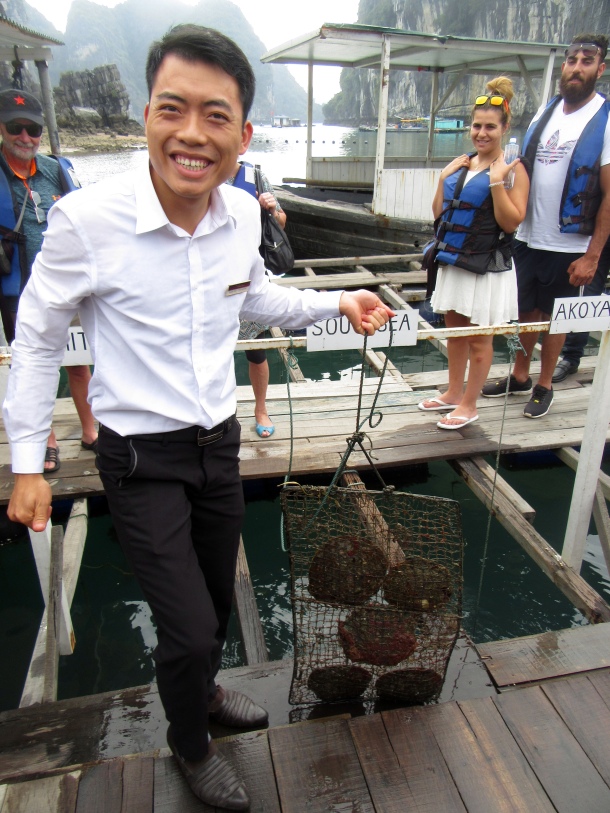 Back to our ship for one final activity – learning how to make spring rolls. After a demonstration, we all leaned in to make our roll – take a piece of rice paper, add a spoonful of filling and roll. How hard can that be, you ask? Well, my roll came out with about an inch or rice paper on either side – more like a Christmas cracker than a spring roll. Must be time for me to get back in a kitchen again.

And that was it – our cruise was over and time to get back on the bus for Hanoi.

Was it worth it? Absolutely – a trip to Halong Bay, no matter where you sail to, should not be missed.