We are now in sultry Kerala, one of India’s southernmost states and it is hot. The past few days have simmered in the low 30s, and a sweaty humidity has settled right in. Not that we’re complaining …  We are engaging in that most Canadian of pastimes – commenting on the weather and considering what our friends up north are dealing with, I will stop right now and tell you about cozy Fort Cochin.  Portuguese, Dutch and English settlers have left their mark on this luscious city perched on the Malabar Coast – part of “God’s Own Country.” 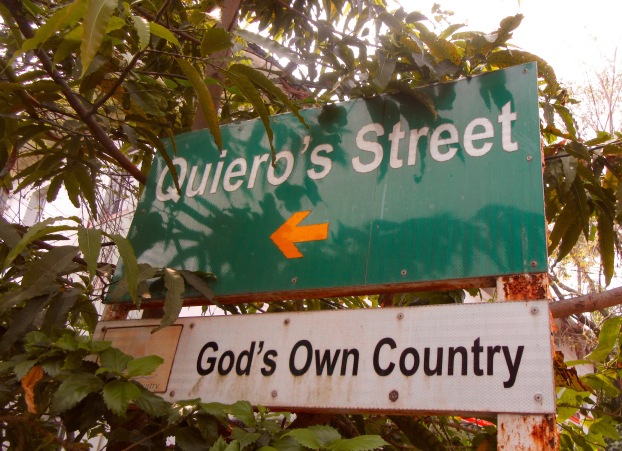 We booked into Casa Mia Homestay, run by the gracious and hospitable Usha, who welcomed us with a kiss on both cheeks and a glass of freshly squeezed grape juice. Usha and her husband and son live on the first floor and her guests are on the second floor. We have a clean and spacious bedroom and bathroom and meet up with the other guests   for breakfast in the family dining room. Most homestays are variations on this theme and are an excellent way to mingle with Indians and  foreign tourists. Usha’s husband Antony built this home, finished with rosewood trim on the walls and a small quarry’s worth of marble on the floors. Our room is the balcony on the right. 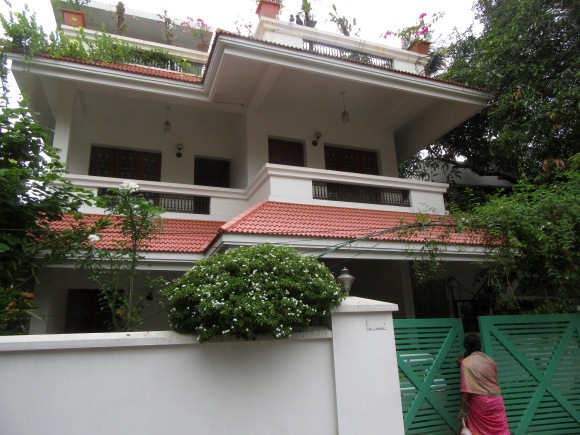 Cochin is a small city in Kerala and Fort Cochin is an idyllic section that is charming, walkable and surrounded by the sea. It is full of idiosyncrasies and non-stop photo ops. On one street you will find this – all polished and white – remnants of the British Raj era: 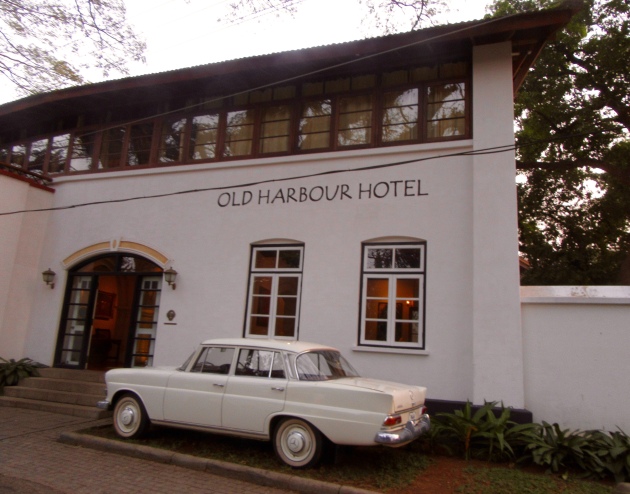 Right around the corner is this building. At first glance, it appeared to be vacant, but I saw women walking inside – it has become a squat. Elegance and wealth; poverty and squalor – the two worlds exist side-by-side. Fort Cochin is too small to have enclaves. 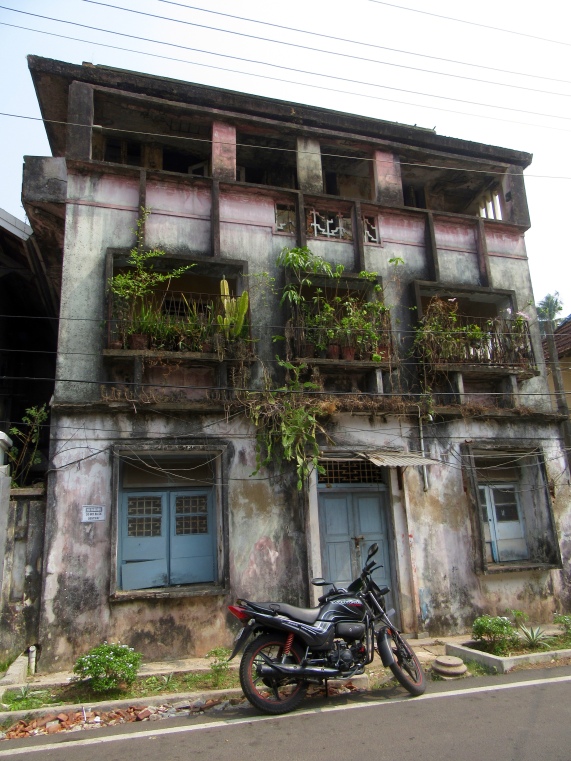 Our street is an interesting mix of homestays, small shops and even a tiny church. We appear to be in a Catholic area (our hosts are devout Catholics), and this little chapel is always open, with a candle lit, ready for anyone to drop by. 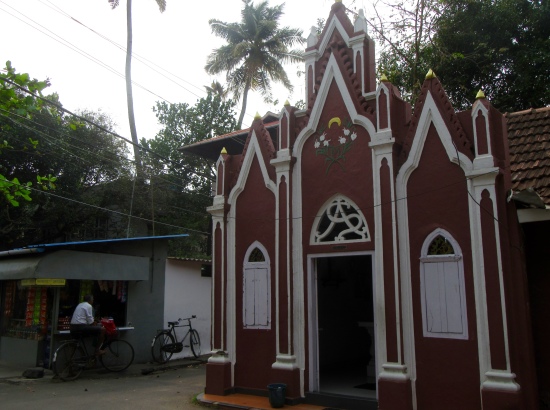 Further down our street is this fabulous car – the HM Ambassador. This quintessential Indian car was based on the British Morris Oxford series, with rights purchased in 1956 to be produced exclusively in India.  It was known as “the King of Indian roads” and ceased production in 2014. I would dearly love to have a car like this back in Canada, right-hand drive and all. 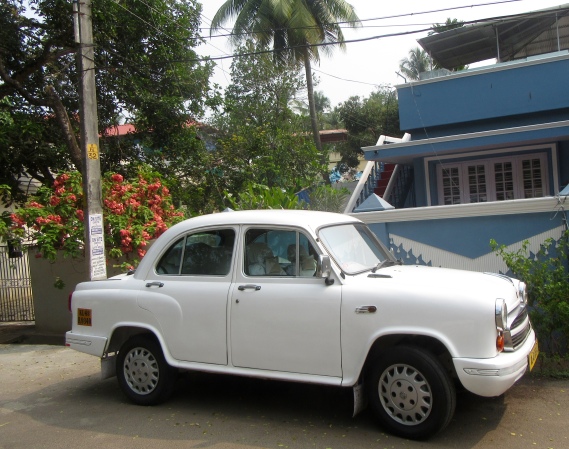 We hear chesty coughs wherever we go. Many tourists, Stephen included, appear to be affected by the daily burning that goes on throughout the country. This is a common sight – sometimes just leaves or papers; other times there is plastic and household garbage burning, which is far more toxic. 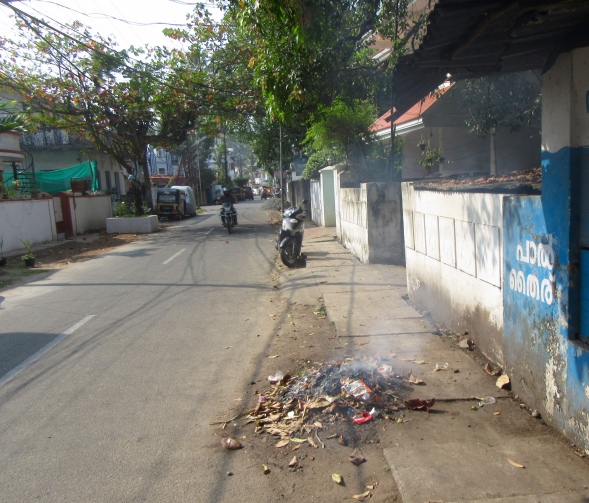 We walk past the ugliness of the burn piles and come round the corner to this beauty: 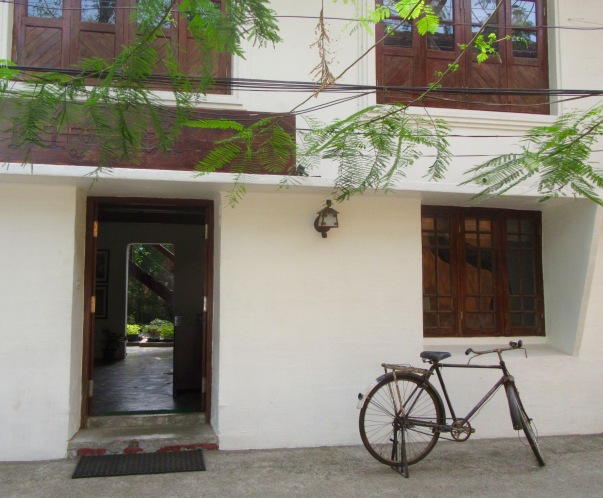 Fort Cochin has provided many examples of artistic design against a backdrop of whitewashed cleanliness that is a balm for our souls. This is the first time so far in our travels in India that we have encountered these pockets of calm and it has made us appreciate how restorative it is. We realize our survival and enjoyment of India will depend upon us finding small pockets to escape to, to allow us to plunge in again.

This little canal smells just like it looks. We walked about three kilometres to Mattancherry, the old spice district, which now has many antique emporiums and tourist shops. On the way, we walked through neighbourhoods like this, past people’s front doors that open to the street. This is yet another taste of life in India. 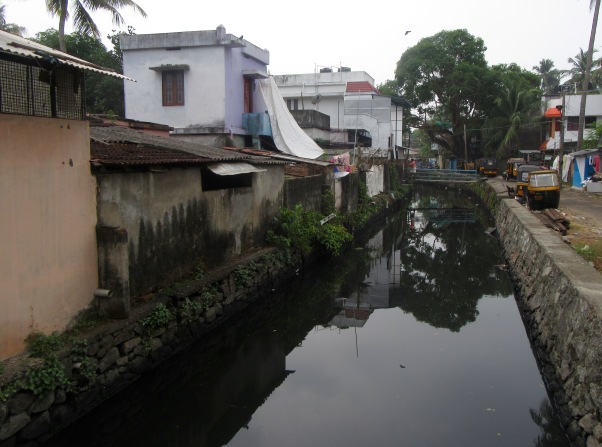 We passed by a group of men bathing in this water – soaping up their bodies and washing their clothes. The building behind them is the Mattancherry Palace, filled with Hindu murals preserved from the 1500’s. They were impressive, but we were just as happy to be inside a cool building with whirring fans and a window seat. 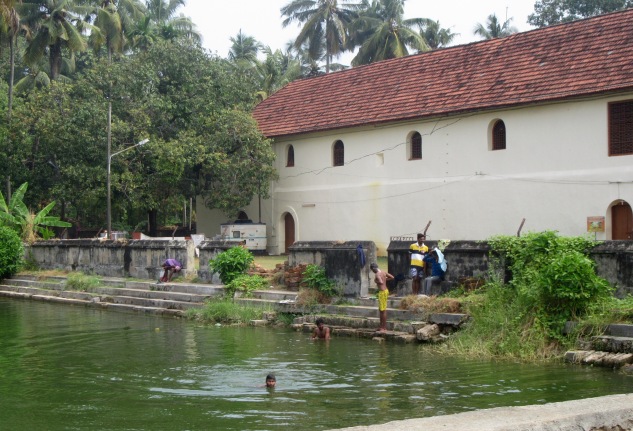 Another important building in this area is the 400-year-old Pardesi Synagogue. The inside is simple and elegant, with a gold pulpit, hand-painted floor tiles, chandeliers and glass lamps. Photographs were prohibited and I couldn’t even sneak one, as we were being watched like a hawk. Apparently we had just squeaked in 5 minutes before closing, so we were ignominiously ushered out almost as soon as we sat down. “You go now. Get out.” Probably lost in translation a little, but I did manage to get the guard to tell me the congregation of this synagogue is just five people. “But tourists are welcome.” 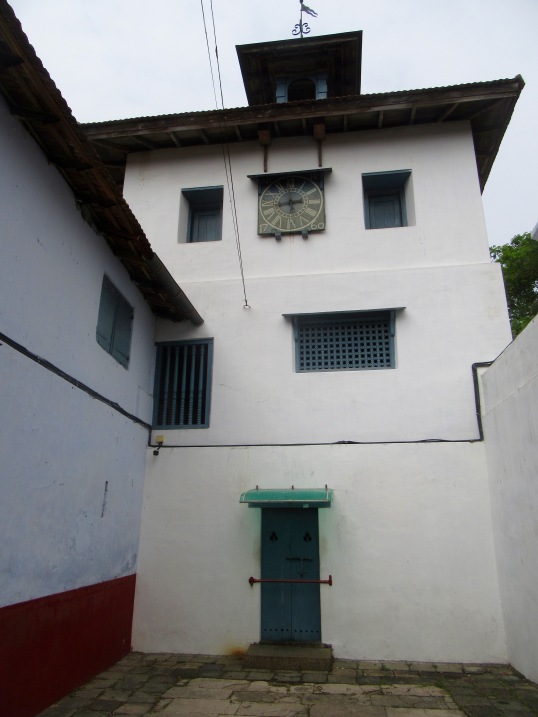 This area of Cochi is called “Jew Town” – a moniker I find quite jarring, but apparently it has come about without any ill intent or bigotry. As the sign proclaims, it is still an area for commerce. 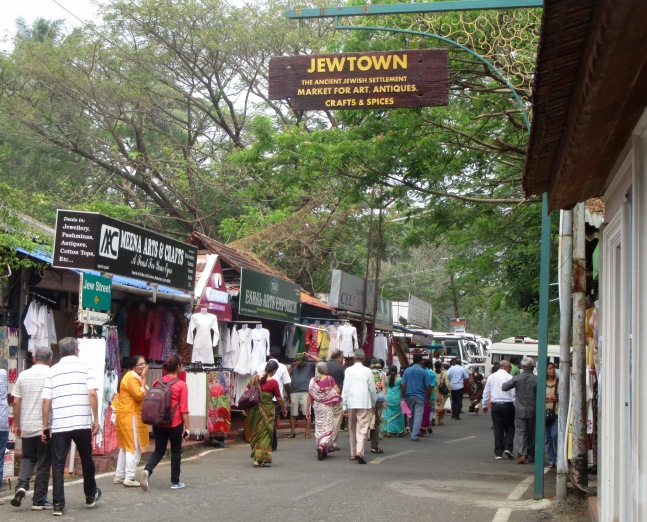 Fantastic buildings in this area – I loved this lineup of shutters, and also loved the still-intact poster of Prince Charles, probably from his end-of-marriage trip to India with Princess Diana, when she famously posed alone at the Taj Mahal. 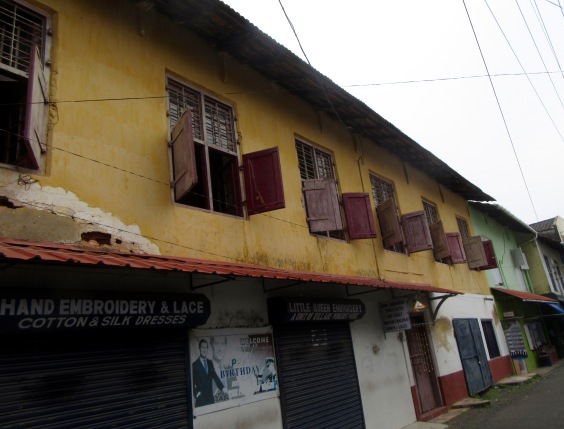 We had a wonderful lunch in this art cafe, and watched the world go by from our window seat. The light fixture is made from a metal flare used by ships to act as markers to warn other vessels of their whereabouts.  This is the kind of thing that appeals to me – repurposing items like this. I have a folder of ideas poached from our travels for the day we settle and make a home again. 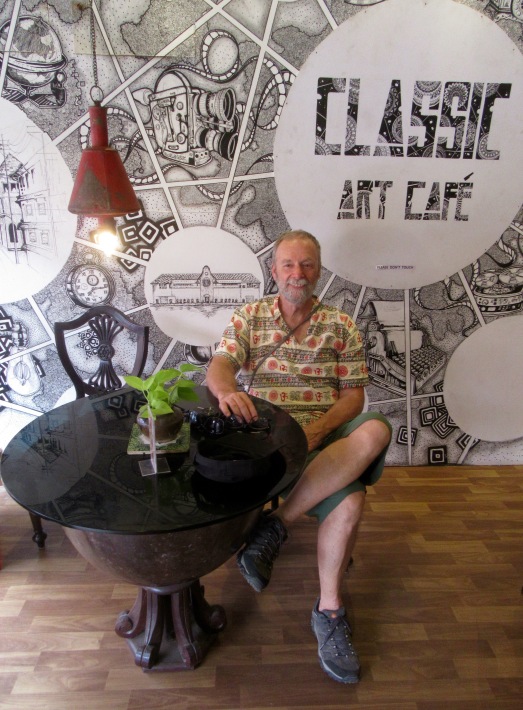 Finding hairdressers while we travel is always a challenge and we’re both hitting that shaggy stage. On the way home, we passed by a barbershop and dropped in. It was not the cleanest little place. I’m betting that bottle of Dettol in the cupboard has not seen the light of day for years. Certainly the comb and scissors were not treated to a disinfectant. Oh well, Steve has no open sores on his head and he came out of there with a great cut and beard trim. The barber seemed quite pleased to have a foreigner in his shop and he reminded Stephen that his cut (which cost 200 rupees – $4), would be 2000 rupees in his hometown! 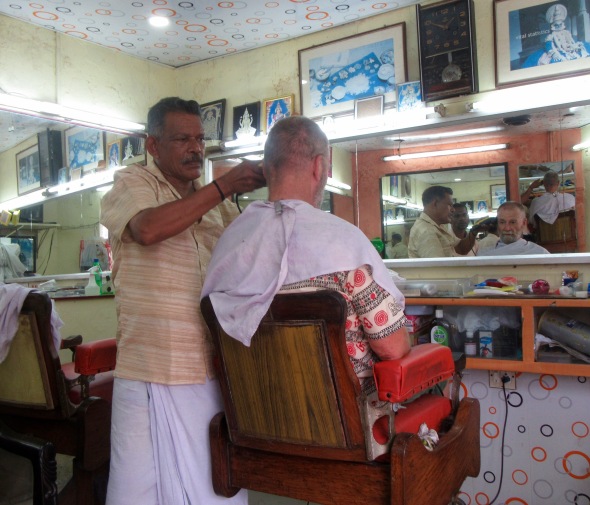 The Chinese Fishing Nets are another tourist draw – we did not manage to capture the magical, sunset tourist-bureau shots of these nets, but they are a relic of the traders from AD 1400 court of Kublai Khan. There are about half a dozen of these massive contraptions that require four people to manage the counterweights that lift and drop the cantilevered nets into the water. We watched for a while – massive effort for a few flopping fish. 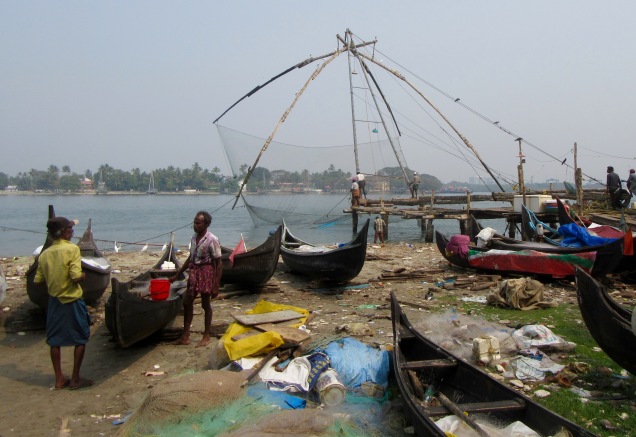 At a nearby children’s park, we came upon this curiosity – a statue of a mother standing beside her little boy. I’m showing you the rear view, but the anatomically correct front view clearly shows this little fellow peeing. There you have it – a public endorsement of that oh-so-familiar site – males of all ages relieving themselves wherever they want. 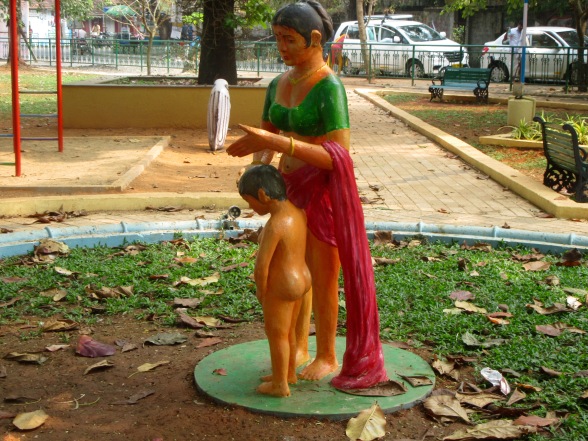 We witnessed another example of behaviour we had been warned about – the dangerous scam of refilling plastic bottles with tap water and selling them again. We have all been well warned about checking our water bottles to make sure the cap has not been opened already and we are careful  – neither of us are keen to experience water-borne illness or dysentery.  We just happened upon this scene – a young man crouched down beside a water tap, filling up plastic bottles. There may be an explanation, but it looks suspicious. 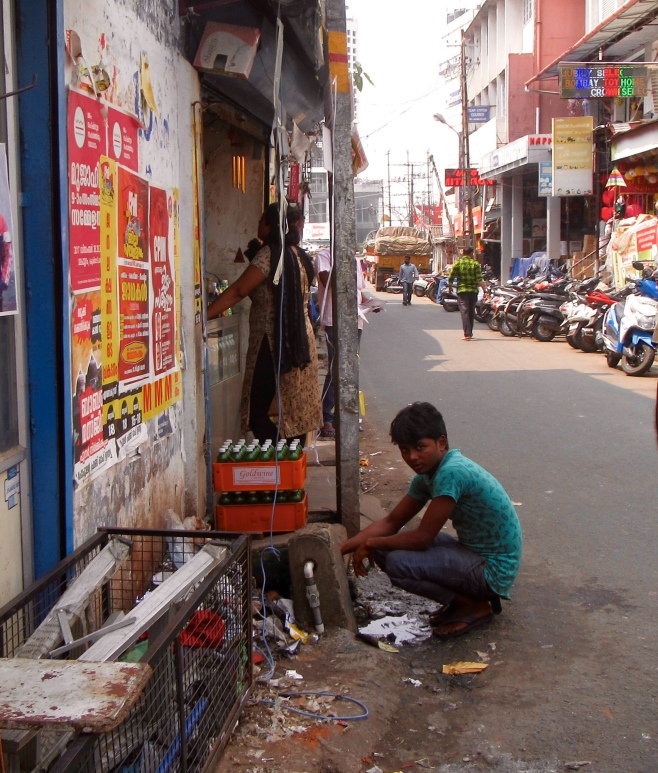 After that ugly scene, a beautiful one – that’s the rule. 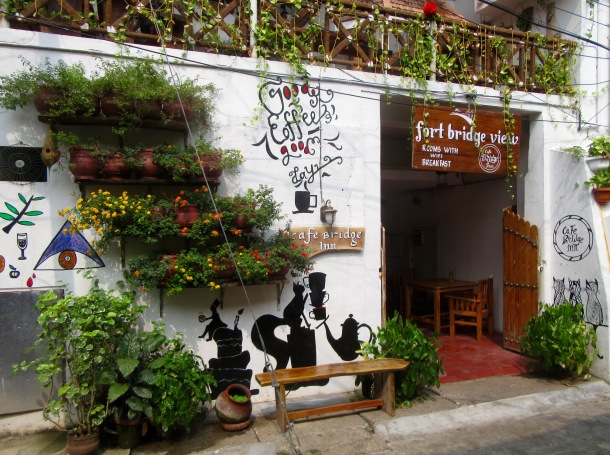 And back to the not-so-nice. This is from a Western and animal-loving perspective – many Indians would not agree with us, as the elephant is an important part of their culture and is used in a number of festivals. This was the case with these five elephants – they were brought in for a festival where they would be outfitted with elaborate headdresses, but we were not prepared for the chains and the lethargy. One of the elephants had a number of sores and wounds on his body – we had to leave.

Another strange situation played out in the little restaurant right across the street from our homestay. We stopped by for a couple of cold drinks and were quite excited to see an eagle land right in front of us. Not so excited when we found out the young men running the cafe had captured this bird and clipped its wings – they wanted to make a pet out of it. 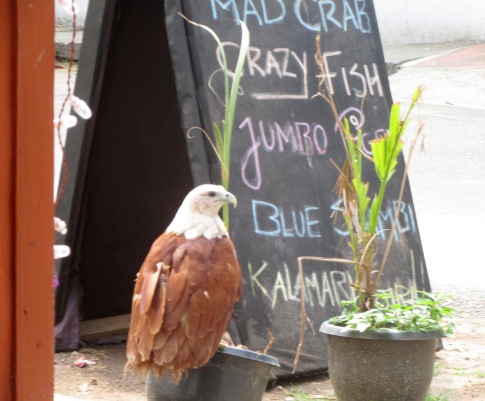 More beauty – a permanent installation at one of our favourite art cafes. Our first night there, we split a watermelon and feta salad, followed by fabulous fusilli pesto – after three weeks of delicious Indian food, we were ready for a change. 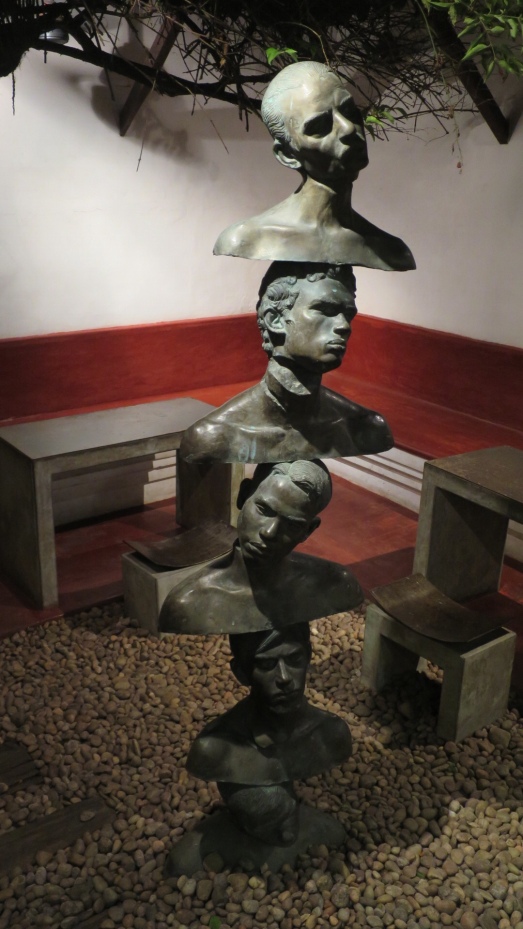 One of our favourite drinks in India is lime ginger soda – a couple of ounces of fresh lime juice, fresh ginger and topped with soda water. It is absolutely refreshing and perfect with Indian spices. We have had very little alcohol since arriving here – in many places it is not readily available. There are three dry states in India and we will not be visiting any of them, but with the exception of Goan beaches, restaurants that serve alcohol are few and far between. We are gratified to find we don’t miss it.

As much as I don’t appreciate being stared at, you can’t help but have fun people-watching. As we were walking back home this afternoon, we saw a beautiful young woman taking a photo of her boyfriend. She was a classically gorgeous Indian woman, and modern –  wearing very short white shorts. Her boyfriend was striking a pose against  a wooden wall – the whole thing looked straight out of an ad.

Just beyond them were these two gents, having a good gander at the woman’s backside. Stephen asked them for a photo and they obliged. 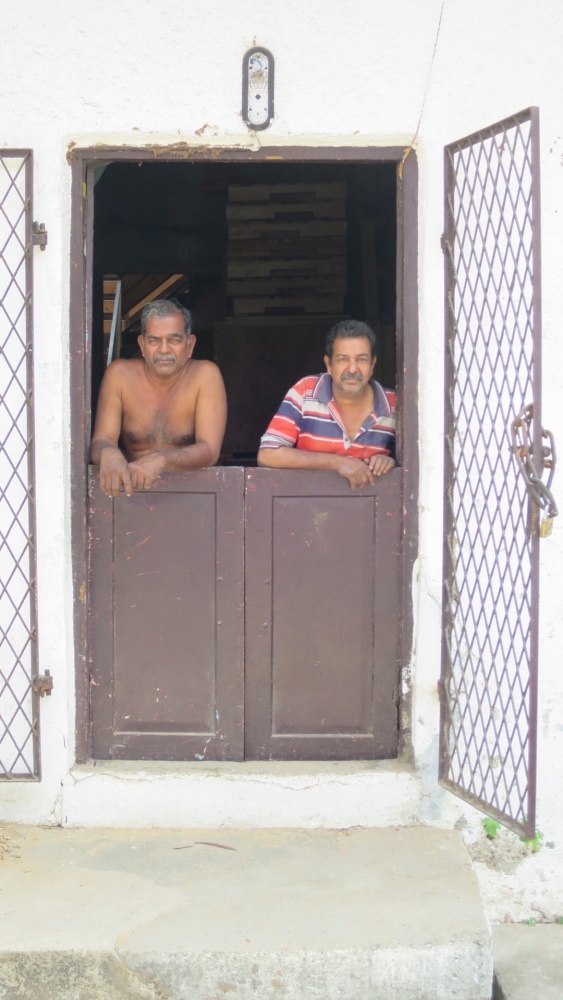 Our friend Kathryn is still in her 30-day retreat – we are keen to hear how it is going for her. Ayurvedics, yoga, spiritual retreats – these are all important reasons for people to visit India. We are travelling strictly as tourists, to see as much as we can, but our eyes are being opened to so many things we didn’t even know existed. 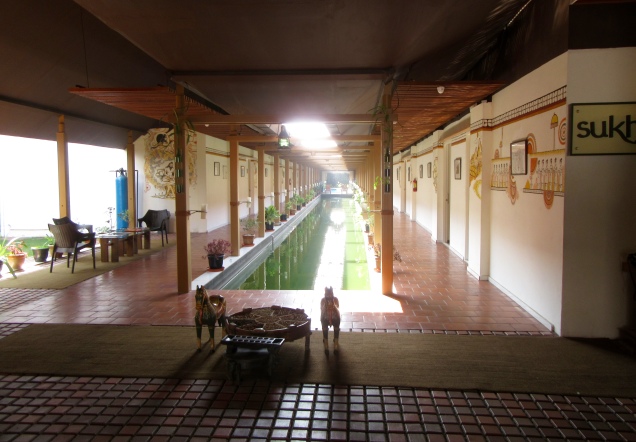 Tomorrow, we trade the steamy heat of Cochi for the cool mountain air of Munnar. Time to visit tea plantations and do a little hilltop trekking.