A week ago, we drove back to Organ Pipe Cactus National Monument, seeking refuge from the snow and sub-zero temperatures that were forecast just about everywhere else in Arizona.  What we got instead was rain – torrential rain that poured for hours and hours and created flash floods and turned dry arroyos into treacherous creeks with a foot or more of water raging through. We made it to the high ground of our campground and waited for brief spells between storms to set up. It was incredibly cozy – we had lots of food to eat, plenty of books to read and I even had a 500-piece puzzle I had picked up at the campground book exchange. It was absolute luxury to tuck in and listen to the rain pound on our roof.

As much as this snow and rain is excessive, the locals are delighted. Arizona needs all the moisture it can get and as tourists, we need to learn not to complain.  The day after the big storm, we went out for a walk in the desert and everything had perked right up. I have no idea how much water was here before the storm, but we sat for about a half hour, watching the birds and hoping to spot wildlife. (no luck – those coyotes and javelinas are too smart to be out mid-day.) 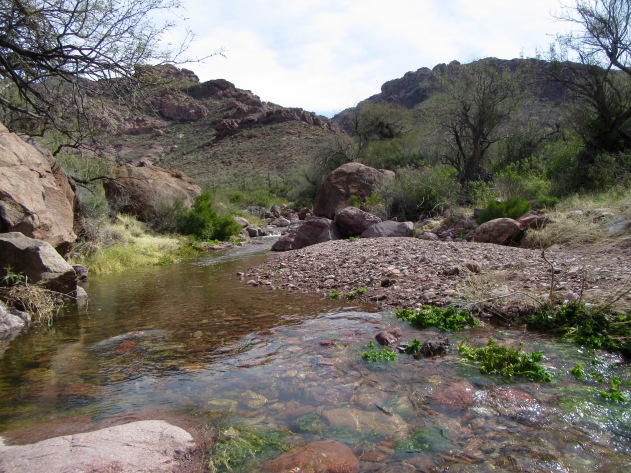 And then,  a huge helicopter flew right overhead, banked hard and flew down the wash. 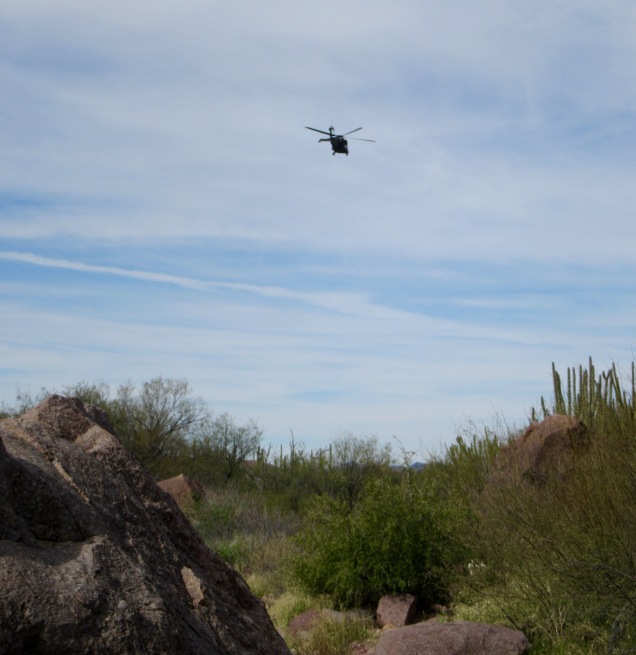 A half hour later, as we were hiking  back out again, someone pointed to where the chopper had landed.  We had seen lots of border patrol activity on our way to the hike.  I was so curious to go over and peer down and see what was going on, but thought that might be frowned upon, so left it alone.

This is the snow we wanted to avoid driving in and camping in and now we have the best of both – bright sunny days with snowcapped mountains and the remnants of the storm still in the fields.

This is just outside the town of Patagonia; about 10 miles from Patagonia Lake State Park, where we have camped out for the past four days.

This area is abundant and more lush than we have experienced in Arizona so far. Still semi-arid, but ringed with mountain ranges that surround broad valleys. This is cattle country.

We’re also in serious birding territory. We had no idea – this is a magnet for serious birders due to the huge variety of species and the area’s geological and ecological diversity.  Prime time for viewing is March to September; a moot point since we are neither birders nor in possession of binoculars – arriving in this area was purely by accident. We were the only people on the trails without being there for the express purpose of seeing birds. Of a type, birders travel singly or in small, quiet groups; outfitted with hats, comfortable shoes and field guides.  They whisper to one another and identify birdcalls. They don’t appear to frighten the birds, who  have seen them all before. This is a group I would love to join. “It’s addictive,” one serious birder told me, after she had expertly mimicked the difference between an owl and a white-winged dove.

In the town of Patagonia, we stopped by The Paton Center for Hummingbirds, which began in the 1970s when local residents Marion and Wally Paton created a garden and began attracting birds with specific plants and feeders. They attracted several varieties of hummingbirds and migrating birds, and the birders soon followed. The Patons set out chairs and invited strangers into their front garden. Before long, it became a world-famous destination and has since expanded into a trail behind the house. Now in alliance with Tucson Audubon and supported by private donors, this magical space belongs to everyone.

We saw many, many birds (which is like saying we went to a botanical garden and saw many, many flowers), but without a decent camera or binoculars or even a passing grasp of bird species, this is the best we could do: 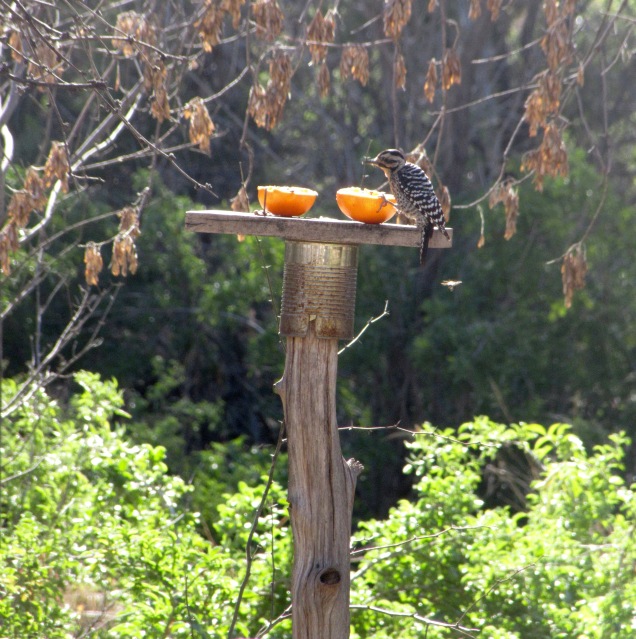 The town of Patagonia is so interesting; a town that is both rough-hewn and in the words of a local, “hippie-dippie.” An artistic community that is managing in spite of a depressed economy. From a couple of quick walks around town, Patagonia revealed an eclectic crowd.

The car and the gent, possibly of a similar vintage (1928 Ford).

Many of the houses in Patagonia are modest; others have a more cared-for appearance and Spanish influence in design. 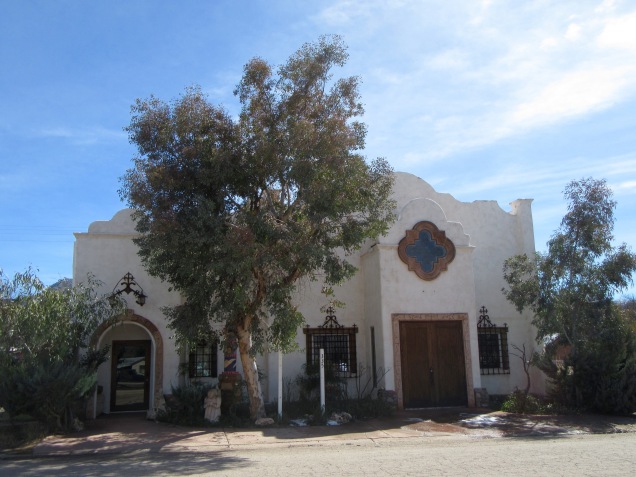 We were lucky to find the Patagonia Museum open. It is run by volunteers and usually open only a few hours three days a week. It is housed in what was the Grammar School that ran from 1914 until 2014. 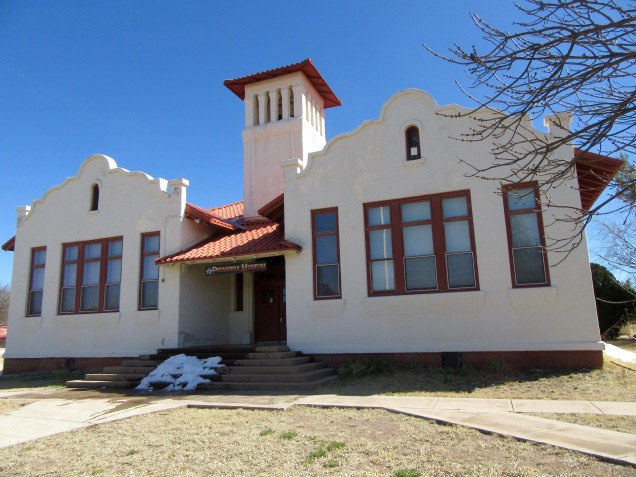 The docent was a teacher there for number of years and she even allowed Stephen to pull the rope and ring the bell, ” a great privilege for my Grade Twos,” as she pointed out. It was fun to wander through the four classrooms, now filled with local artifacts and display boards.

Meanwhile, back at the ranch…  Patagonia Lake State Park is set on a man-made lake which is stocked with fish, primarily bass.

It is also a lovely spot to rent a boat and row your sweetie around until you are exhausted. The young woman was curled up on the bow, laughing; the young man was grimly rowing. We caught up with them again as they cleared the bridge, heading for the dock.

The park is also surrounded by more prime birding opportunities. We walked to this trail from our campsite, where we easily identified white-winged doves. 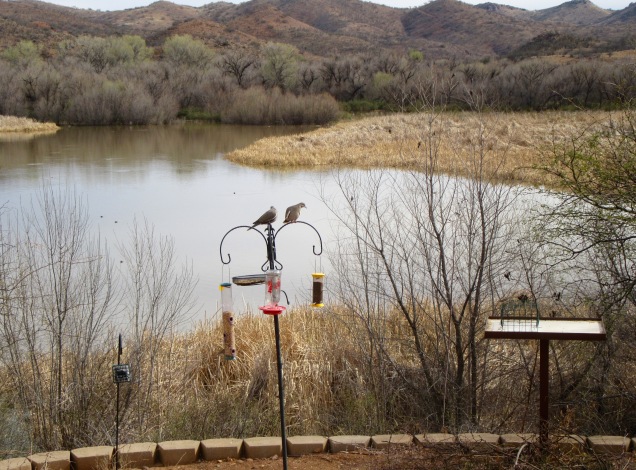 The trail led through forests of mesquite – low-ish trees that look dead right now, but are slowly developing that lovely green haze we all wait for that tells us winter is almost over. 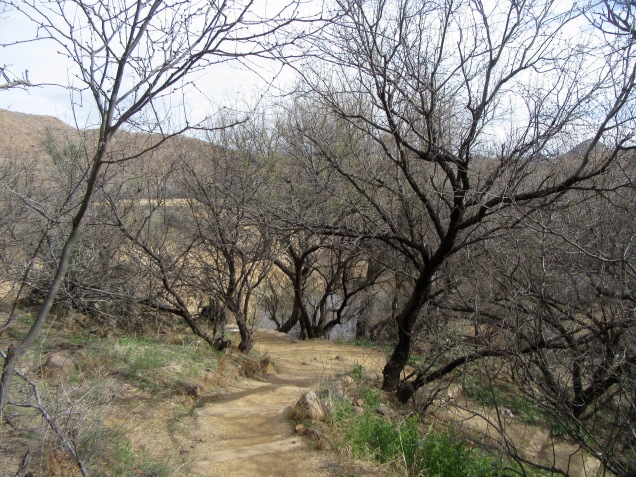 Incongruously, there is a herd of cattle that grazes in this state park and this little crew gave us the hard stare as we approached.   We encountered cows on a number of our hikes, miles and miles away from anywhere; in Arizona, cattle are allowed to  graze free range on public land. 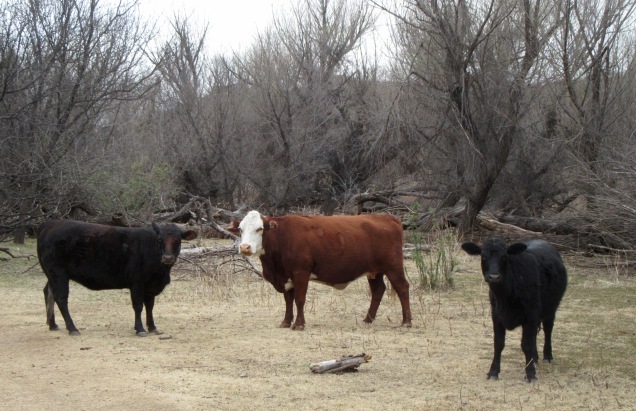 Yesterday we took on a 3-mile hike through the Patagonia Sonoita Creek Preserve that should have been easy – a slight elevation and a loop trail leading though cottonwoods and ocotillo, with grand views of a number of mountain ranges.

We can’t say we weren’t warned. The ranger advised us that the creek running through the upper end of the hike was flooded due to the snow, and the normally wet rock crossing was now submerged under 2-3 inches of water. We can do that!

A beautiful walk – everything just on the verge of greening up and springing into blossom. “If only we were here two weeks from now”, we said.

We reached the halfway point, and walked for a while on an old railway line.

When we reached the rock crossing, it was not two or three inches, it was over a foot of water over the rocks, which meant the water on either side of the rock crossing might be two to three feet deep.  (forgot to take a photo of the creek, sorry).

We walked back and forth and saw one part of the creek that we thought we might be able to cross by getting our feet a bit wet, then hopping up onto a fallen tree and shimmying over it to the other side. If we had to save our very lives, we would have attempted it, but I had visions of plunging off the tree into the water, ruining my camera, and possibly doing harm to myself.  We had no choice but to retrace our steps and add another mile or so to our hike. We had fun in spite of ourselves, and our lone truck in the parking lot shone like a beacon.

We’re off to Bisbee area tomorrow for a week – see you again soon.