“I feel like a cowboy”, said Fanny, a young Belgian who has been travelling for several months across Canada with her partner Jay. They think the prairies are “awesome” and in fact, love almost everything they’ve seen since arriving in Montreal eight months ago.  They are here because they heard great things about Canada and they wanted to open up and explore life before careers and family took over. Part of the attraction for them was our huge and varied landscape.

It is essential to get off the Trans-Canada Highway to see the best of the country. While some of the secondary roads are patchy and rough, others are well-maintained and practically empty. We sailed merrily along at 110 and 120 (and higher) for much of the time.

We were keen to visit Grasslands National Park in southern Saskatchewan to get up close to that deceptively passive terrain. Just look at this photo. Hidden in those hills and valleys are dozens of birds, rattlesnakes, bison, prairie dogs, Richardson ground squirrels, coyotes, and burrowing owls. You’d never know it, and that is the defining quality of the prairies – you need to get out of your car and travel on foot to appreciate what is there, right in front of your face.

As we were heading toward Grasslands we got a sneak preview of the abundant animal life. We stopped by a marsh to view the hundreds of birds that were either in the water or flitting about stalks of grass. This area was just teeming with life –  so many native birds we had never seen. It was an astounding sight, but before we could attempt to take any photos we were driven back to our car by swarms of biting insects. We were actually swatting and running, like something out of a comic strip.  A serious bird-watcher or photographer might want bee-keeper style headgear and a bottle of Deet.

There are also many deer and antelope and I now have “Oh give me a home, where the buffalo roam” stuck in my head.  This little pronghorn antelope bounced across the road and stopped for a photo. 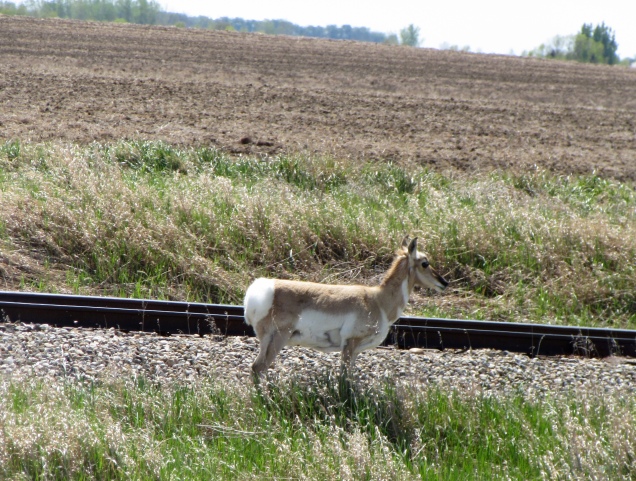 The prairies are just like everything you’ve seen from photos.  Ribbon roads, railway trestles and fence posts figure prominently.

So do grain elevators. Most town have one, right beside the railway tracks. Grain elevators, trains and the big sky –  iconic elements of the prairies.

The fields are dotted with abandoned and crumbling  structures.  These weathered old homes aren’t going anywhere – at some point, the roof will cave in and no-one will even notice. They bear witness to a pioneer past.

Saskatchewan is a province that constantly reminds you of the disproportionate person-to-land ratio. While the cities and larger towns prosper, a lot of small “towns” are actually crossroads – there are no stores, gas stations or hotels.  Success  is a tiny hamlet with a couple of dozen homes. The signpost is pocked with bullet-holes – target practice or frustration?

Grasslands National Park is about 35 km. north of Montana, and Val Marie is the closest small town in Canada – again, about 35 km. to the campground. Our original plan was to stay one night in Val Marie to reorganize our car, power up our devices, buy some food and get set for 3 days of rustic (no showers) camping. It did not turn out that way. The one bed and breakfast (Convent Inn) was closed for the long weekend (?!?) and our other option, the Val Marie Hotel, was horrifying filthy. It was a shabby building with a Beverage Room Entrance, but we were willing to overlook the externals until we saw the shared bathroom. Off to the campground we went (minus groceries, since the grocery store also closed for Holiday Monday).

Our first sight of the campground saved our sagging spirits – this would be a great adventure. Our first night we sat in front of a campfire, watched the night sky and listened to coyotes howl.

Grasslands is relatively new (4-5 years old), and infrastructure is still a work in progress. This campground has 24 sites, as well as 4 cabins and an overflow site, with spotlessly clean pit toilet buildings, potable water taps, dump pits for grey water and animal-proof garbage and recycle bins. The main building to the right is the Parks Canada office/wifi centre, and there are plans for showers at some point.

It is also populated with dozens of Richardson ground squirrels, who have an impressive system of tunnels. They seem willing to share their home with us and while they run and chase each other and pop in and out of their tunnels, they do not come close to people (or their dogs). They are also impressively car-smart.

There is an 80-km. Ecotour drive that runs the periphery of the park, providing a comprehensive and scenic overview of the lay of the land, as well as several lookout stations. We stopped at the black-tailed prairie dog colony. Grasslands is the only place in Canada where they exist in the wild.  They are often confused with ground squirrels, but these little characters are much larger and way more sociable. They bark and chat and chase each other, and have created a fascinating inter-connected community of big mounds and tunnels. 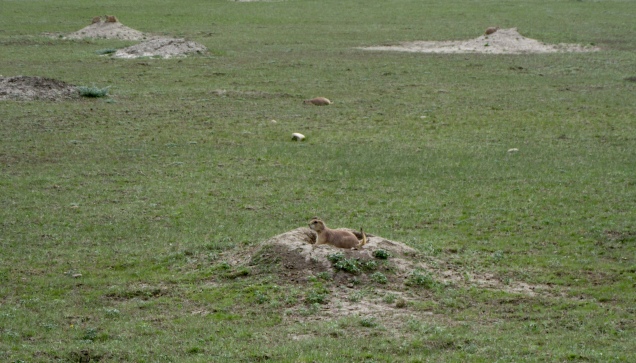 And of course the big draw are the bison herds. They were brought into the park in 2006 from Elk Island National Park and today the herd stands at about 350. We were given a dangerous animals brochure (bison and rattlesnakes) and advised to remain at least a football field away from bison, particularly at this time of year when they are calving and more aggressive. These are majestic creatures – woolly and shaggy and huge.

This one was right at the main gate, but we stayed in the car for photos – he was stomping and shaking his big head – clearly he was not on welcome committee detail.

As for rattlesnakes – we had no luck with sightings. They advised us to wear boots and long pants tucked into socks, and we could have borrowed snake garters, but we ventured out and kept a close eye on the ground cover.

We headed out on an 11-km. trail, which was well marked and great for the hamstrings (described modestly as undulating prairie). No animal sightings on that hike, but lots of panoramic vistas.

Very happy to be heading back to the barn – we had hiked out to the far range of hills and back. 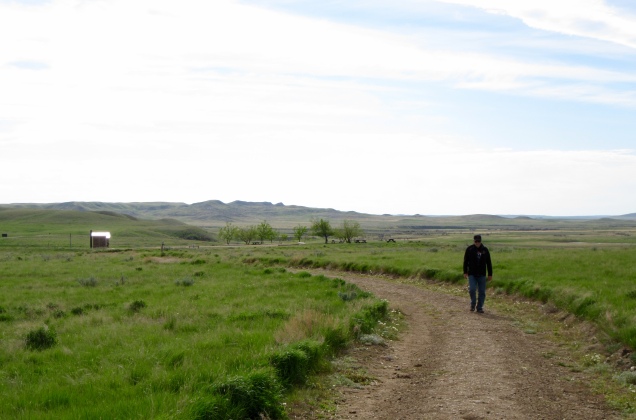 Unfortunately, the weather turned suddenly, as is often the case in the Prairies. We experienced significant howling winds on our last night, with our tent snapping and falling in on us – a long night and terrible sleep. We woke up to a changed forecast – really strong winds (up to 90 km.), followed by rain, so we reluctantly made the decision to leave.

On our way out of the park, we stopped to chat with a couple from Victoria who are also travelling across Canada, but doing it with a lot more comfort. They are pulling a bright yellow trailer emblazoned with Big Canadian Stuff and will be on the road until October. They have definitely made the case for having a warm, dry home-away-from-home, especially for travelling long distances through North America in three seasons. 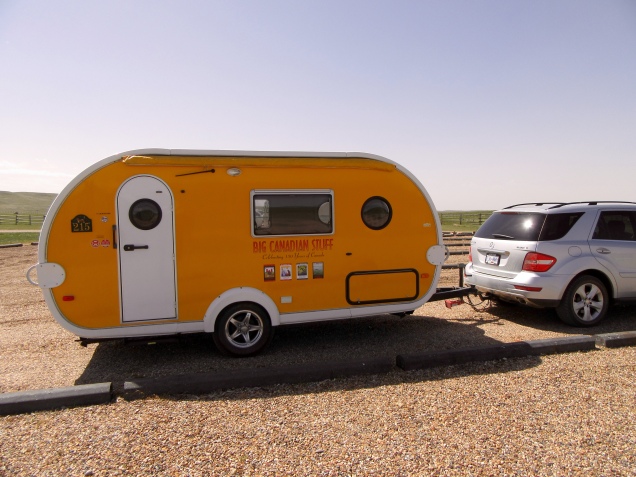 We drove east on Hwy, 13, part of the historic Red Coat Trail. This is the trail taken by the North-West Mounted Police to bring law and order to the wild west; now indicated with distinctive route markers. 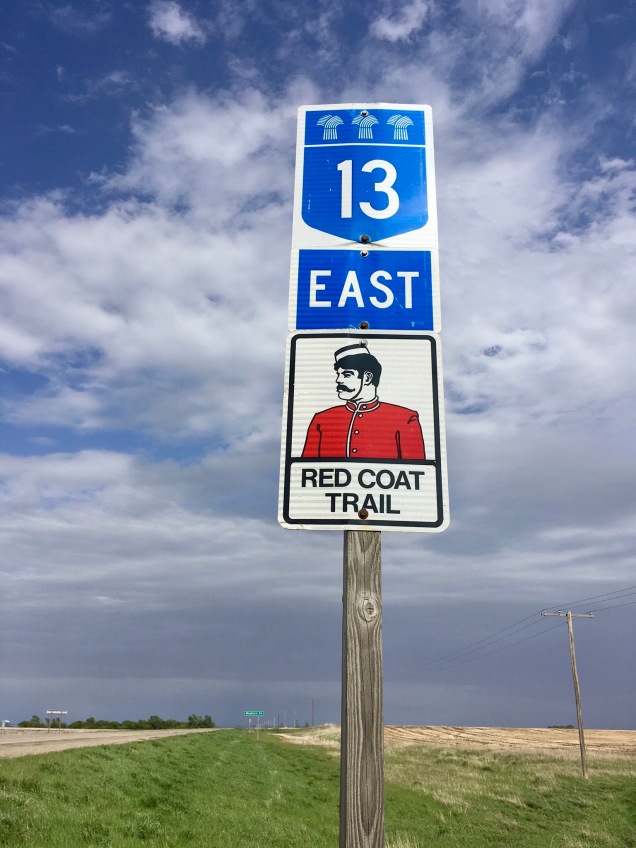 We are hanging out for a couple of days in Weyburn, home of Tommy Douglas. We’re in  a Canalta hotel (a Western chain of hotels) and decided to stay an extra day to regroup.

This is a hotel that caters to work crews and once a week they leave out dinner for them. Last night it was cabbage rolls and potato salad. We rolled in with a filthy, bug-splattered car packed to the rafters with smoky camp gear. We hadn’t had showers for three days. Within minutes, we were checked in and sitting down to an unexpected and delicious meal. We were taken care of by very kind Prairie folks who made us want to stay a little longer. Another hidden charm –  the people. When Steve commented this morning how much he enjoyed the cabbage rolls the night before, they arrived over to our breakfast table with two plates of leftovers – “You can heat them up later.”