One of the first things we noticed when we arrived in Phnom Penh was the skyline – green-clad buildings with cranes on every second corner. In fact, on our corner, we have three building projects on the go – a fact we missed in the TripAdvisor reviews until after we booked. It hasn’t really been a problem – there is banging and hammering going on around our  little hotel each day from 7 a.m. until 5 p.m., but then the workers promptly knock off for the day and all is quiet.  Progress is being made, as we opened our curtains yesterday morning to this sight.  The concrete truck had arrived.

Chinese and South Korean investments have set a blistering pace of new construction which is transforming the city. 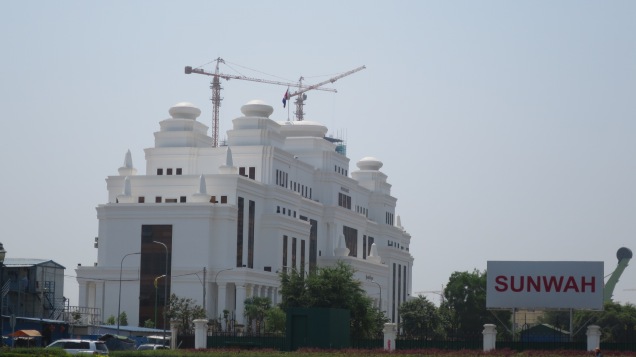 The healthy financial infusion is responsible for the creation
of featureless buildings like this, an incongruous backdrop for the gilt temple.

And this no-frills complex:

And Nagaworld, the new casino on the riverfront that
resembles a medium-security prison.

There is a maximum-return-for-investment quality to many of the new buildings. A modern apartment building moves next door to well-preserved history. 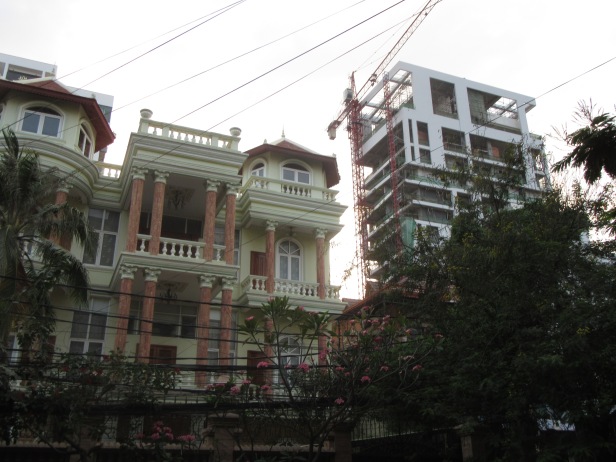 Some fear the distinctive character of Phnom Penh’s French colonial architecture will be lost as old buildings come down to be replaced with new. Some of the new builds are replicating the old, such as this gracious mansion. 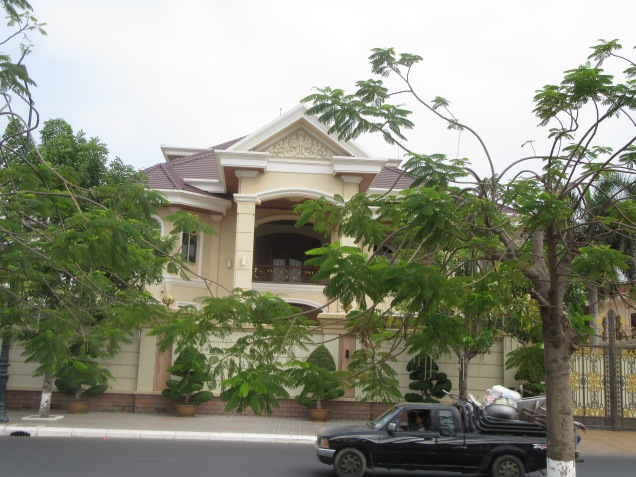 And with the new money comes the spoils. We noticed a disproportionate number of Lexus SUVs and Range Rovers – the vehicles of choice for the newly wealthy (and their drivers). We began a count, much like the blossom count in Victoria each spring, to see how many Lexuses (Lexi?) passed by an intersection in five minutes but lost track. At this point, they appear to be out-gunning the Range Rovers, with BMWs and Mercedes trailing far behind. 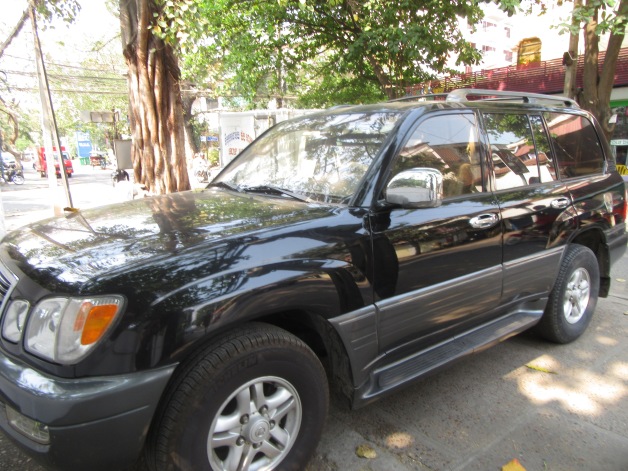 Not to begrudge any hardworking businessperson their just rewards, but “just” does not appear to factor into the picture here. It is under strenuous debate as to whether this vigorous growth will help many Cambodians, or whether the cash flow will simply circulate within a small and monstrously well-compensated circle.

We noticed the men who are working on the building next door to us are living right on the dirty site; some of them with families. The people who live in this appalling building have it little better. The building stretches for a couple of city blocks – probably condemned (one hopes that there is not rent being collected here). We discovered this on a walk, just a couple of streets away from a comfortable expat area.

We’ve seen deep rural poverty, but at the very least there would be a community and possibly a way to grow or catch food. This kind of urban poverty has a built-in trap – no way up and no way out.

We spoke to two young women who are in Phnom Penh working for NGOs. They are quite torn about their efforts. They feel that some action is better than none and are aware that without the significant presence of NGOs and social enterprise businesses, it would be so much worse.  On the other hand, they are discouraged that after so many decades, the city and country still rely so heavily on their help. They don’t see the lives of many Cambodians improving and they don’t see  significant change with government initiatives and policies.

And then we spoke to our Canadian friend Chelsea, who has been working at an international school for the past three years. We met her for a great catch-up visit at one of her favourite cafes. It was really fun to see her in her native habitat, and hear some ex-pat perspective about Cambodia. 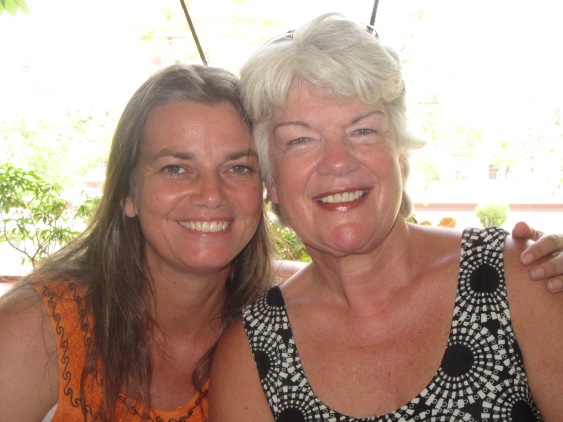 After breakfast, Chelsea led us down to the riverfront for a bit of a tour, and on the way showed us how the locals navigate a massive roundabout (I can’t say how many lanes because there weren’t any – people came from all directions and just fused together in a moving mass). Wheeling her bicycle as a shield (ha!), we walked beside her (“just keep moving slowly, they will move around you”), and we made it. Then, we did it again. I’m still no further ahead in comprehending how this all works, but I did give a tuk-tuk driver a great laugh today as he watched me jitterbug through traffic.

One stretch of the riverfront walkway is fairly new – a great addition to the city. Phnom Penh is situated on a confluence of three rivers – the Mekong, Tonle Sap and Tonle Bassac.  Tourist cruise boats and ferries set off from two docks along the  shore. 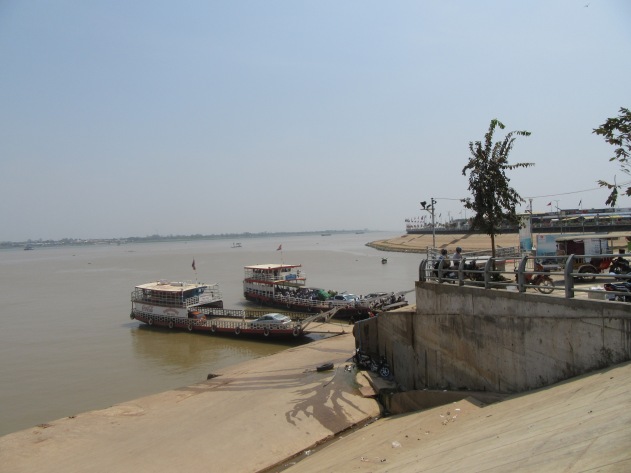 We’ve done a few tourist-y things over the past few days. We checked out the Russian Market (good place to buy discounted Western clothes), where I am ashamed to say, we ate lunch at KFC. We could not find any restaurants and we were so hot that we would have sold our soul for air-conditioning.

We walked down to the National Museum, which houses a collection of Angkor and post-Angkor sandstone sculptures. Maybe it’s us, but we both found it underwhelming, although the building and gardens are gorgeous.

What we really enjoyed about Phnom Penh was just walking around and taking it all in. Although there are few sidewalks and full-on traffic, walking became a pleasant challenge. The reward lies in what is just around the next corner.

Markets and vendors are part of the landscape. Many people work two or three jobs, so sleeping on the job is allowed.

We did not see any small, detached houses – mainly apartment buildings, hotels or mansions. Like the hold-out whose neighbours have long since left and the high-rises have moved in, I wondered about this house’s history.

An example of an older apartment, adorned with many plants and lanterns.

Not far away, a cleaner, sleeker version.

We wandered along the canal street until the smells drove us away.

And back again to wide open boulevards and green space.

Independence Monument, situated further down this boulevard commemorates Cambodia’s independence from France in 1953, and is a memorial to Cambodia’s war dead.

We loved our time in Phnom Penh – it was a good mix of being tourists and of just hanging out with no agenda.  It’s such an interesting city and in a state of massive change – what might it look like five years from now?

We also loved the Cambodian people – almost universally they have been kind and approachable and warm. The staff at our hotel call us “mama” and “papa.”

I’ll leave you with an interesting story about our encounter with a fake monk. We were having lunch at an outdoor cafe, and a monk approached us with a broad smile and somewhat ludicrously, a thumbs-up sign.

We smiled back until he held out his coconut/alms bowl, already filled with American dollars. We waved him away and watched as he made the rounds; he received at least two or three donations.

We were suspicious right away, as this was extremely un-monk-like behaviour. Sure enough, we Googled “fake monks”  (try it – there are loads of articles) and apparently they are a real problem, not just here but all over the world. London, New York and San Francisco have been plagued by them.
They have hit on quite the scam – who would refuse a monk?

Real monks live on charity, but they do not go begging. Their alms walk is for food – they never touch money. They never approach women.  I met the eye of a young monk a few days ago and without thinking, smiled and said hello. It made him extremely uncomfortable.

We leave tomorrow morning for the last leg of our trip – almost six weeks left to explore Vietnam.

Oaxaca beer delivery is done by hand- 4 cases of 24 carried on a strong back! #oaxaca #beer #mexico
Just a random fellow at an Artesian market, Oaxaca #art #artfigure #oaxaca #mexicomagico
....or Oaxaca street art can be whimsical. It all adds to barrio character and life. #oaxaca #streetart #mexico
Oaxaca street art is always evocative, creating colourful stories in the barrios. #oaxaca #streetart #culture
The view from our apartment on our final night in Greece- the Parthenon. Sad to leave, but anxious to return to Greece to see much more. #parathenon#greece#athens#acropoliscenter
Monemvassia is also full entrances /doors to space we never experienced. #doors#monemvasia #monemvasiacastle #stephenpaulburr #greece #pelopennese #leavingourselvesbehind