There are two main roads that head south on Baja – the Mex. 1 highway that winds down the Pacific and crosses over to the southern tip and the much shorter Mex. 5 that runs from the U.S. border town of Mexicali south of San Felipe along the northern end of the Sea of Cortez. We decided to take that route because we had heard big chunks of Mex. 1 south of Ensenada were at a standstill due to construction (not true, according to fellow travellers). There is always road construction in Baja, but none of the forums warned us about the severity of Mex. 5 (described as being “rough in sections”) and had we known conditions were this bad, we would have avoided that area entirely.

We were off to a great start with our drive to San Felipe, a small fishing village easily reached by a very good road which ominously, had no-one on it. The first signs of life we encountered were just north of town –  a collection of homes and stores that cater to the expat population.

When we were there, there was a fiesta celebrating some ATV racers event; swarming with racers, plenty of beer from the San Felipe Brewing Company and a band with the requisite 60-something rockers struggling through Margaritaville.  Several big racing events are held in Baja each year, notably the Baja 1000. This countryside is just begging for speed – there are miles and miles of sandy paths winding through the desert. 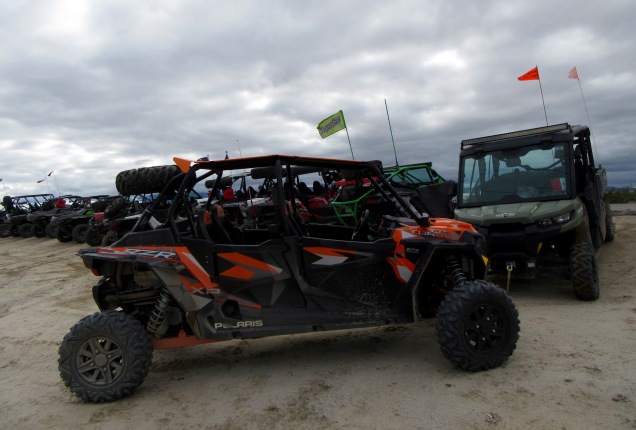 We arrived at our campground in San Felipe and stayed for five nights – long enough to get off the road, do laundry, wash our truck and trailer, meet some lovely people next door to us, and just…relax and enjoy this view.

In Mexico, you will be hard-pressed to find a way to wash your own clothes or clean your own car. And that’s a good thing, because when you hand your car over to a Mexican, it will sparkle.  There are many car washes, but there are also the guys on the street with buckets of water and rags. We grabbed this man to wash our car – he asked for 50 pesos (about $3.50). We paid him double and it was a deal at twice the price.

Laundry is another Mexican delight. You take in a bag of scrunched-up dirty clothes and later that same day, you pick them up – T-shirts with sleeves tucked in and undies folded in thirds. We dropped off clothing, sheets, towels, tea-towels, washcloths and two hours and $11 later – we were all set. This is the lavanderia in San Felipe – typical in most of Mexico and a beacon for travellers. We were not in San Felipe in high season – apparently this is more of a Mexican destination and really takes off in the summer. We were among the very few gringo tourists wandering the waterfront and we disappointed the good-natured vendors who could not convince us to buy knock-off sunglasses or “almost-free” straw hats.

San Felipe has an international airport, a glorious waterfront and easy access to the U.S. border, and yet it has missed that magic tourist bullet. The influx of foreign investment, snazzy shops and great little restaurants hasn’t happened. The south end of San Felipe is lined with a string of condo and resort investments that people have walked away from – the business just never materialized.

And yet…we met Gabriella and Christian, a young couple (Mexican and French-Canadian) who met in Canada and who have committed to building a business in San Felipe. Their shop, C and G Cava, where they sell home-baked goods, coffee and cheese is open Monday to Friday, and they lead tours to the countryside on the weekend. Their energy was infectious.

One of the nearby attractions is the Valle de los Gigantes, a region of the Giant Cardon, or Saguaro cactus. Much of the area is only accessible to 4×4 vehicles, but we were able to park a couple of kilometres from the gate and hike in from there.

The Saguaro reach heights of 50 or 60 feet, and some of the more majestic ones are over 2000 years old. Here I am, feeling positively petite and youthful beside a typical cactus.

We were told that in the desert, flowers can spring up within hours after a rain. There had been rain the area the night before, and the valley was filled with these luscious purple flowers. We also loved the “bearded” cactus.

A parting shot – the saguaro bracketed by ocotillo – an octopus-armed cacti which pops bright red flowers on the stems.

And then…it was time to move on, and although we had been warned by our fellow campers in San Felipe about the “goat path” that lay ahead, nothing could have prepared us for the non-road we were about to travel on.

This stretch of highway between San Felipe and the intersection with Highway 1 has been plagued with many years of hurricane damage and washouts. Repeated attempts have been made to repair and replace, and each year nature wreaks its havoc.

For the first 20 kilometres outside of San Felipe, we drove through garden variety potholes and patched roads. Then…the construction began. At the same time that repairs are being made to hurricane damage, there is ongoing construction to build a new road.

A double whammy – slowdowns through construction sites combined with at least a dozen areas where roads and bridges had been washed out from the latest hurricanes that passed through this fall. These areas were served with bypass roads – goat paths of the first order – clay, sand, sharp rock – that were, to put it mildly, “creatively engineered.” With nowhere to go but forward, we climbed down, up and over these roads, our little truck gamely pushing forward and our trailer following behind. At times we struggled, but always made it.

By the time we saw this sign, all we could do was laugh.

Kilometre after kilometre we crawled at 20 kph, driving over sharp rocks, praying our tires would not puncture and then, as we were inching down a slippery hill, we met up with a tractor trailer that had jack-knifed and obstructed most of the road.

Imagine this: We are just up the road from the tractor-trailer. Stephen stops our truck and I run down to see if there is a way out.  There is – just barely – to the left of the truck. With about two feet to spare, we decide to go for it. We spoke to the truck driver – he agreed we could make it – and then Stephen began. You can’t see it from this angle, but there is about a 30-foot drop off the side. Stephen inched forward, sliding but keeping control, watching the truck driver who gestured encouragingly, (and not me, who was frantically waving and grimacing), until he made it to safety on the other side. 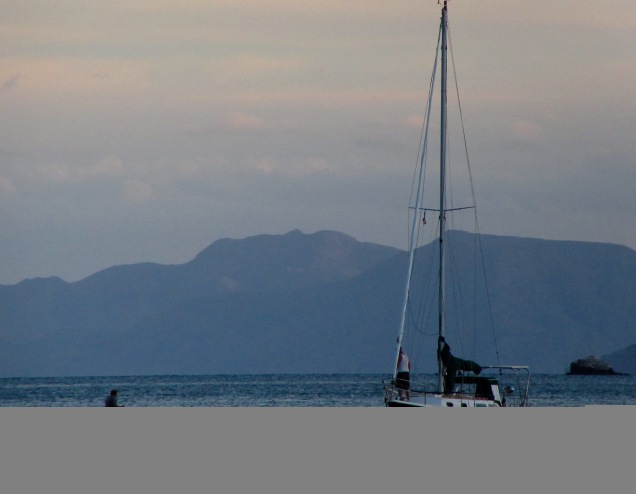 We found out later that we made it through just in time.  On another bypass road, a truck dropped a load of scrap metal. An hour or two later, traffic backed up with no way out and was stopped for the night. The only vehicles getting through were motorcycles.

Our destination for the night was Gonzaga Bay – an idyllic swath of beach we had almost to ourselves. First we stopped for water – delivered to us with an inimitable Mexican work-around – a hose inserted into a sawed-off plastic bottle. 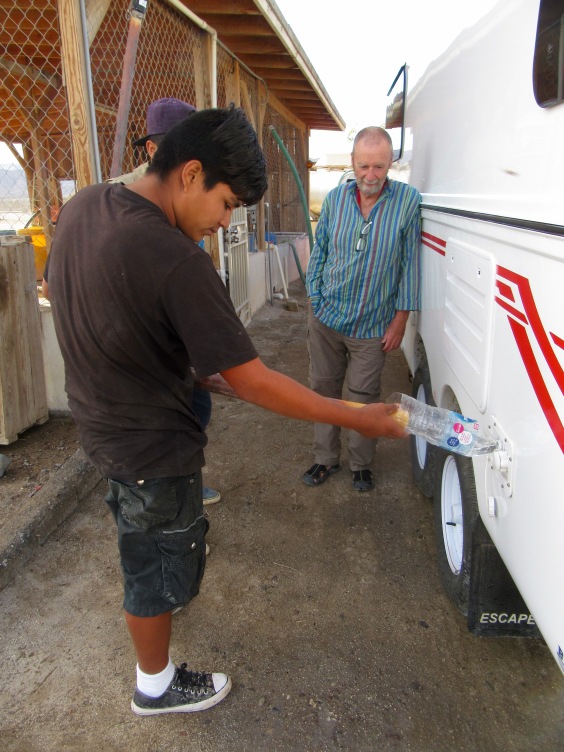 Our respite from the road.

And next morning – back at ‘er – the last stretch of the Road From Hell – it took us two and a half hours to travel 60 kilometres  from Gonzaga Bay to the shimmering mirage of Highway 1. This was a mild version of the road that included rockfall, confusing signage, multiple roads to choose from and almost no-one on the road. 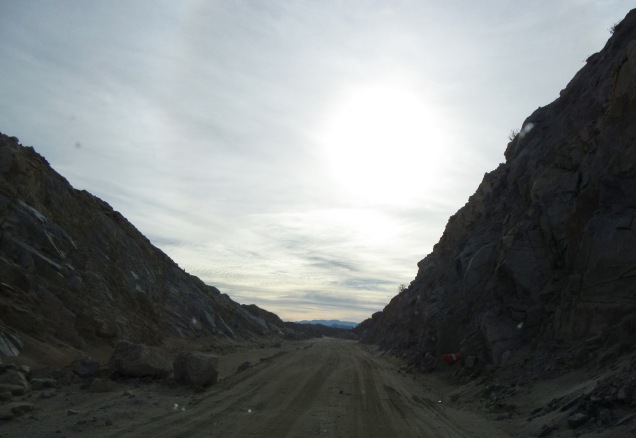 Today was a very slightly less terrifying than the day before, but with the added bonus of a most enigmatic diversion – Coco’s Corner.

We don’t know the story of Coco – a Mexican man who speaks English quite well, is a double amputee who lives alone, and sells beer and water to passers-by. We had heard about him, so stopped by for a welcome break from the road.

This is his home and small store – the only sign of life anywhere on this stretch of road.

We were greeted by a young woman from Ottawa who, with her boyfriend, had stayed the night on his property. They found themselves at Coco’s Corner late in the day, and decided it was too risky to carry on in the dark, and were invited to park for the night. We spoke to them for a bit, bought a couple of beers from Coco, and pondered the room full of autographed undies. There are questions you just don’t ask someone you don’t know, but boy, I would love to know Coco’s story.

And voila – just like that – it was over. The horrible road, the uncertainty of what lay ahead, the worry about puncturing a tire (or two) – we turned left onto Highway 1 and headed south. Over two days, it had taken us twelve hours to drive 400 kilometres. Our advice if you are wanting to visit this area? Consider yourself warned.

We are in Guerrero Negro for the night – the first town south of the Baja Norte border. This is one of the prime sites of the grey whales as they come to give birth. Since the season is not quite underway, we will stop here again in a month or so on our way north.