The last time we were in Newfoundland was almost 40 years ago. A friend was studying at Memorial University so we flew in from Toronto for a week’s visit. That visit involved late nights and alcohol, so our memories are a bit tainted but St. John’s had a rough edge then. Now there’s shiny new buildings and decent restaurants and stores that sell many varieties of olive oil.  People work out – St. John’s has its very own Stairmaster – about 100 steps up from the waterfront.

These women were completing their ninth run up the stairs when we stopped to talk. (We had just huffed up one time –  after finishing our ice cream cone).  Before we left, they were circling for the 10th and final time.

We’re here for seven nights – staying at an Airbnb and being hosted by a young woman who owns a heritage home close to downtown and rents out two bedrooms.  The advantages : we have the opportunity to meet other people, hang out in a neighbourhood and pay half the going rate of a St. John’s hotel ($68 a night). The disadvantages – we have  five people vying for one bathroom in the morning! So far, it’s worked out well, and as a bonus,  we are right around the corner from our friend Ingrid.

We met Ingrid over 35 years ago. She had completed her studies at Memorial University and was checking out life in Vancouver. It didn’t stick – she moved back to St. John’s and we lost touch.  Life in Newfoundland has suited her very well. She retired from a 30-year career  with CBC, has a son who lives in Halifax and has a happy life hanging out with this town’s musicians and miscreants. We swapped stories, had a beer on her back deck and tried to get the hang of selfies.

Ingrid is our finger on the pulse of life in Newfoundland. I asked her about getting “screeched in” and got an unabashed and profane response. I figured it for a contrived tourist gimmick and got a sense of that from a few older Newfoundlanders.

Being “screeched in” takes place in a bar and involves tossing on a sou-wester, throwing back a shot of screech and kissing a frozen cod. A certificate is then bestowed on the newly minted Newfoundlander wannabe. There are two perspectives – one of innocent fun and inclusiveness and the other of perpetuating stereotypes of the drunken goofy Newfie. The use of the word “Newfie” is also questionable – offensive to some and yet…we see this sign and wonder. 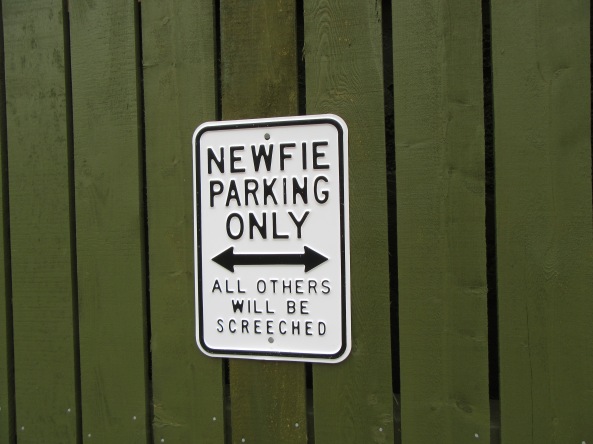 Being in Newfoundland can feel like being in a foreign country. Language ranges from clear diction to a charming Irish lilt to an incomprehensible jumble. We were approached today by a gentleman who noted that we were “a far piece from home.”  That came out like, “Yos a fapeezefrawomb.” We managed to figure that out, but the rest of the conversation was lost on us, so we just kept smiling.

St. John’s is famous for its crayon-box homes. We’ve only begun to discover the town, but here’s a teaser:

Just down the street from us – I love this  home, with its  picket fence, Kraft Dinner paint job and matching flower basket. This is a colour to get you through winter. 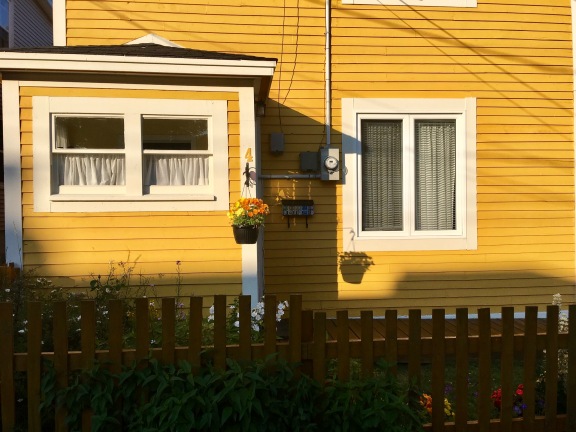 Our first night here, we walked down to the waterfront to get the lay of the land. This is a working harbour – unlike Halifax or Vancouver whose container ships are sequestered away, St. John’s is a little less picturesque. In a controversial move, much of the harbour is now behind a high gate (ostensibly for security reasons) and it prevents pedestrians from being able to walk beside some of the more interesting ships. This was taken through the chain-link fence, and looks straight out to The Narrows.

St. John’s is one of the oldest settlements in North America, but much of the east end of the city was destroyed by the Great Fire of 1892. Many of the older houses and businesses in the downtown  have gone through a number of incarnations. I love the irony of The Cornerstone Building, which was once a Catholic School for Girls and is now a strip club.

Our first dinner in St. John’s – wood-fired pizza, fresh salad and Campari at Piatto – we needed a break from fish and homebaked rolls. A memorable start.

Next up – the search for the Newfoundland dog. I thought we’d be tripping over them, but according to a number of reliable sources – they have fallen out of favour. They have relatively short lives, cost a lot to feed and no doubt that ever-present slobber is a deterrent. Still, we saw this big guy, Dory, and couldn’t resist – we pulled off the road and accosted his owner, who was quite tickled that we were so interested in him.

We’re splitting our time between being in St. John’s and heading up and down the fingers of the Avalon Peninsula.  We drove to Portugal Cove and parked beside a lookout. A couple told us we had “just missed” a pod of humpbacks. They are out there in great numbers – we will make sure we see them before we leave this island. Still – the cove was very pretty – we sat and enjoyed the view and tried to figure out how the boat system works. We saw pulleys, but couldn’t make sense of it.

On to Brigus – one of the oldest settlements in North America and one of the prettiest towns – very New England in its look. 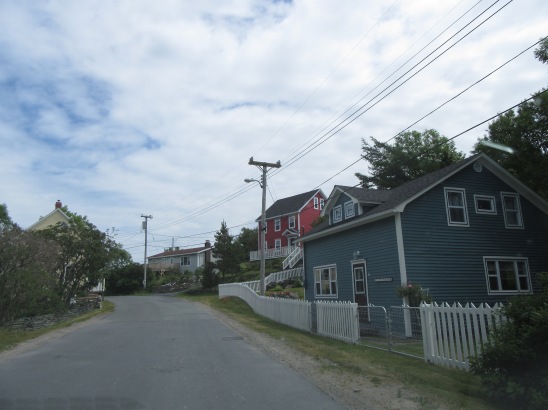 Homes ranged from modern re-dos of a traditional saltbox (one of my favourites – I love the clean lines and the Lego staircase):

We bumped into a charming man who had recently returned to Brigus after a couple of decades in Colorado. He was sitting on the dock and struck up a conversation with us – he was finding his way back to Newfoundland and seemed pleased that we were enjoying his home province so much. He took this photo of us. 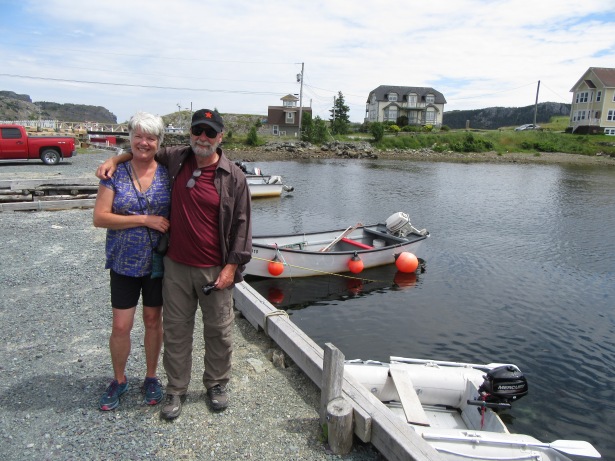 The view out to sea: 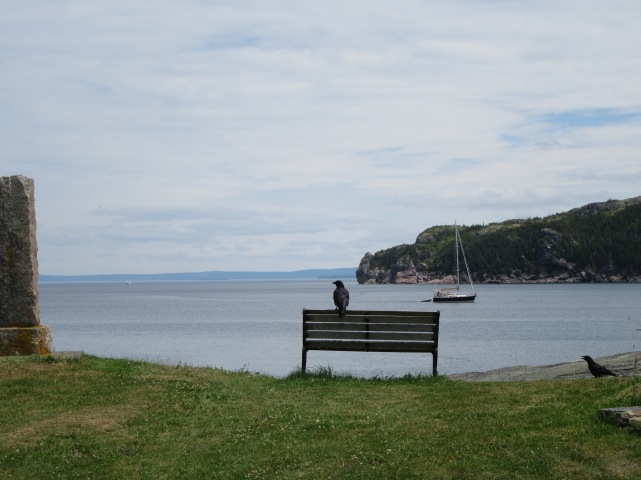 Just down the road is Cupids, another very old settlement in Newfoundland. They have an excellent interpretive centre there and an imposing harbour. At the top of a hill, we found this home – a stately command post.

This home reminded me of  one of the famous Newfoundland and Labrador ads we have all grown to love – shot against a backdrop of water and blue sky. However, most locals are telling us this that sun and heat is not typical of a Newfoundland summer and we’ve been very lucky to have a full week of it. 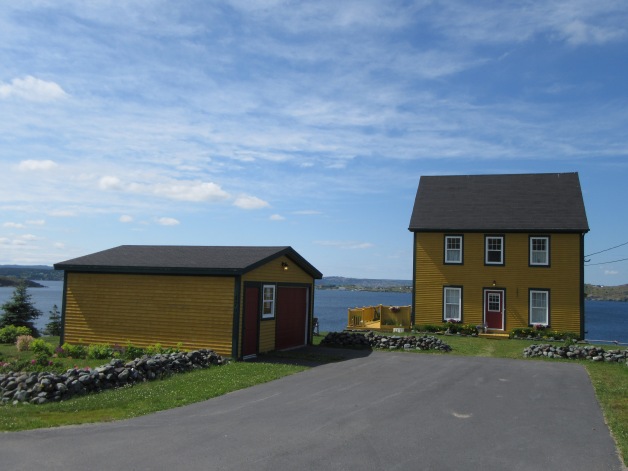 We found out today that Newfoundland in July can be foggy!! We drove two and a half hours to reach Cape St. Mary’s Ecological Reserve – one of the largest northern gannet colonies in the province. Since this area gets 200 days of fog a year, we weren’t surprised but a little disappointed that our visibility was not ideal to view these nesting birds.

Walking toward the interpretive centre – an idea of the range of visibility we had.

The 1.4 km. walk out to the nesting site is well-marked with orange markers, to prevent visitors from straying off the path and plunging 100 metres to their death. With all potential hazards out of the way, we enjoyed the atmospheric stroll out to the cliffs, punctuated by the steady sound of the fog horn.

Finally – to the edge, and the first glimpse of the birds.
If you look closely, you can also see razorbills – they are black with white tummies, like miniature penguins. 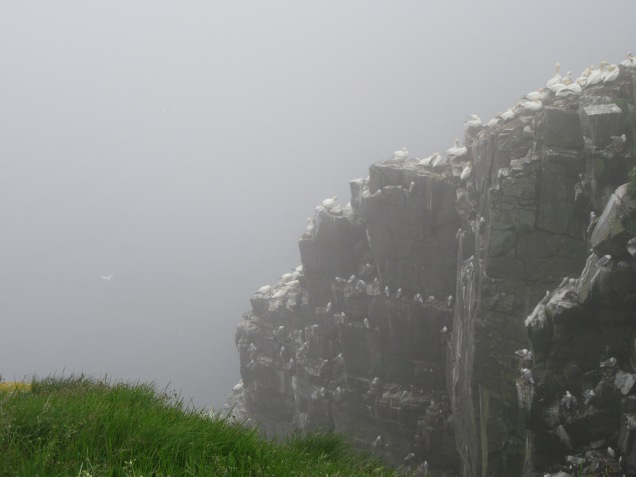 Stephen took a brief video to capture the sound of 10,000+ birds. The smell was just as overwhelming – I’ll leave that to your imagination.

One final image – Newfoundland’s famous potholes. Some of the major highways are well-paved, others are not, and still others are no better than a back road in Mexico. There are many theories – from the severe weather, to the damaging effects of the snowplows to the “Jeezley” politicians who have misspent funds, but whatever the reason – Newfoundland roads can be hazardous. We were way more afraid of ripping up our tires or breaking an axle than we were of hitting a moose.

On a typical 10-km. stretch of road, you might drive around hundreds of potholes like this and worse.

See you again soon – lots more St. John’s and area to explore before we leave.