We’ve been in Thailand for three days and are just surfacing from our fog of jet lag, culture shock and temperature change. On the advice of friends who have been to Thailand many times, we booked a hotel close to the Bangkok airport for two nights before tackling the city. It was a sound plan – after 20 hours of travel, we weren’t able to do much more than wander up the street in time to see the New Year’s Eve fireworks. The next day we bobbed in and out of a slightly woolly-headed state of disorientation. Rather than try to sightsee, we opted to hang out by the pool, read and have naps. 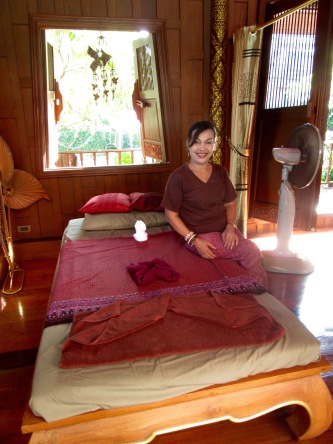 Although I did have my first Thai massage – this lovely lady pounded the living daylights out of me for an hour.

She poked, pressed and pummelled my body until every last bit of airplane tension was gone. The traditional Thai massage is not exactly relaxing, but it is very effective.

Our arrival in the city was pure Miller-Burr – we got lost. We took the SkyTrain from the airport to our stop, and then trudged down to the street, loaded up with our backpacks and gasping from the heat – only to discover we had no idea where to go from there. We grabbed a tuk-tuk, which was an exhilarating experience. The photo below is not our tuk-tuk, but will give you an idea of what car and driver look like while waiting for business.

The driver of our tuk-tuk (an unstable-looking vehicle which is a cross between a motorized rickshaw and a utility trailer), propelled us into heavy traffic, merrily changing lanes and cutting off tour buses. We hurtled along for about 20 minutes before our driver realized he was lost. After a number of consultations with other drivers and traffic cops, we finally arrived at our hotel. We were warned that it was “a bit difficult to find, but you can imagine our chagrin as we entered this alleyway.

Once we got past the hanging clothes, piles of garbage and makeshift cooking stands, it was a great relief to discover our hotel was everything it had been promised online – clean, secure, air-conditioned, with friendly staff and a welcoming lobby. We are staying in the old section of Bangkok, and narrow alleyways are part of the landscape. So are smells. You are assaulted at every turn by an odiferous cloud of sewage, garbage, cooking and cleaning smells.

Our first afternoon in the big city was both an exploration of our area and a crash course on surviving the streets. Warning signs are everywhere.

While Thailand is quite safe for tourists, the biggest threats are crimes of opportunity. A common crime is having one’s bag grabbed by thieves on motorcycles, whose modus operandi is to pull up beside someone, slash the strap of their bag and drive off. Duly noted – I bought my PacSafe bag with cut-proof straps and now confidently stride with bag firmly strapped across my chest. Major tourist attractions and temples all have signs warning of pickpockets. Typical scams to beware of are touts approaching tourists with offers to take them on tours, or taxis that offer fixed rates; both tend to involve being led on an annoying tour to friends’ stores for high-pressure selling. Almost without fail, they pick me out of the crowd – my excited, smiling face is their clue to move in. So far, so good – I have resisted the urge to buy fake gems or discuss their cousins in Montreal.

One of our first stops was the famous (infamous) Khao San Road, which is backpacker heaven and hell for anyone else who might want quiet and/or hygiene. We saw this sign pleading with people to be a bit more respectful. 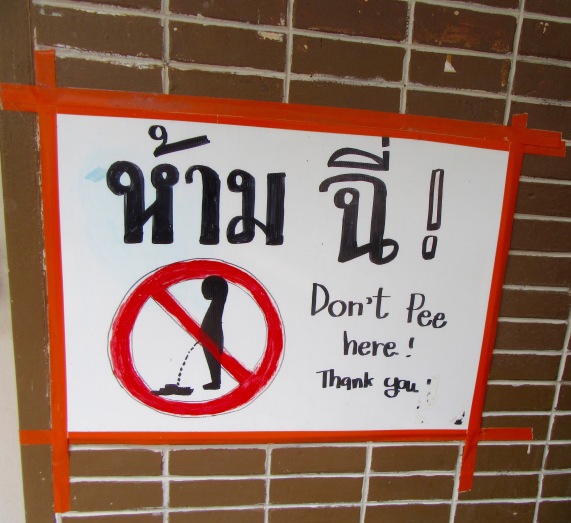 Packed to the rafters with hostels, guesthouses, massage parlours, noodle houses and tourist shops selling incense, jewellery and rayon schmatta, Khao San is the Bourbon Street of Bangkok. And, as we have discovered in our short time here, Bangkok is a city of massive contrasts and contradictions. Just around the corner from Khao San we discovered this little oasis of trees, tidy restaurants and relative calm.

Thai people eat all the time – mealtimes just seem to blend into a 24-hour orgy of snacking and drinking fresh smoothies, and eating delicious fruit, punctuated by sit-down meals. While I admire that spirit, I haven’t quite caught up with those appetites – too hot, too busy guzzling water. There must be thousands of restaurants in this city but we’ve been concentrating on the street food, and have hit the motherlode a couple of times. Last night we discovered a place called “Jok”; an outdoor grill serving about 20 tables non-stop. Simply delicious – we ordered pad thai and chicken with cashews – so fresh and perfect – exactly what we wanted. We’ve decided that we won’t notice the pans of dirty dishes sitting in tubs on the ground and we won’t notice them being swabbed indifferently with a dirty cloth before being used again. Actually, we will notice them, we will just change our perspective and not get too fussed, or else we may as well pack up now and go back home.

We shared a table with a young Dutch woman from Gouda (pronounced how-da, as I discovered, not goo-da, as I have been mispronouncing all these years). Most of the people we’ve been meeting are European – we have yet to meet a fellow Canadian. Tonight we sat beside three men from France who are in Thailand on a buying trip for their clothing store back home. These encounters are a big part of the travels – they are so enriching.

Traffic in Bangkok is famous. To begin with, Thailand has left-side drive, which means we are at a disadvantage as we peer down in one direction and forget to look the other way -our orientation is all wrong. Chaotic does not begin to describe the scene of dozens upon dozens  of motorcycles and scooters dodging around trucks and buses and cars; creating their very own rules of the road, and taking no prisoners. All vehicles change lanes and cut one another off, and play fast and loose with traffic lights. Accidents are frequent and deadly – in the 3-day period between December 29-31, there were 1700 road accidents in the country, with 199 road deaths. Pedestrians take their very lives into their hands as they cross the road – so far, I have been reduced to clinging to Stephen’s hand, and mincing along in little bunny hops to get to the other side. My personal goal is to walk the roads like I own them, as is the Thai way.

So…our first impressions of Bangkok are exactly what we anticipated they would be. We knew we would feel overwhelmed, we knew we would experience culture shock and we knew we would suffer from the heat and humidity. But there is so much to see here, so much to learn about and so much of ourselves that needs a reboot, that being here for a few days is very welcome. We went to a magnificent temple today – Wat Pho. I will tell you about it in a posting in a couple of days, but I’d like to leave you with a final impression of grace and benediction. While we were at the temple, we came upon an extraordinary scene of a  monk applying great lashings of icy water upon the heads of willing supplicants. We both underwent this treatment – supposedly to bring us good luck. Possibly the monk was having fun at our expense, but it was worth the insurance for a bright and positive 2017.

35 thoughts on “The beauty and the beast of Bangkok”