Since Luang Prabang was our first stop, referring to it as Lao’s “heart” may not be accurate – who knows what lies ahead as we travel through the country. But honestly, if we didn’t see another thing, we would leave Laos with rich and heartwarming images. Luang Prabang has a command post on the banks of the Mekong and the Nam Khan rivers, with postcard views at every corner. This is a city made for sunrises and sunsets. 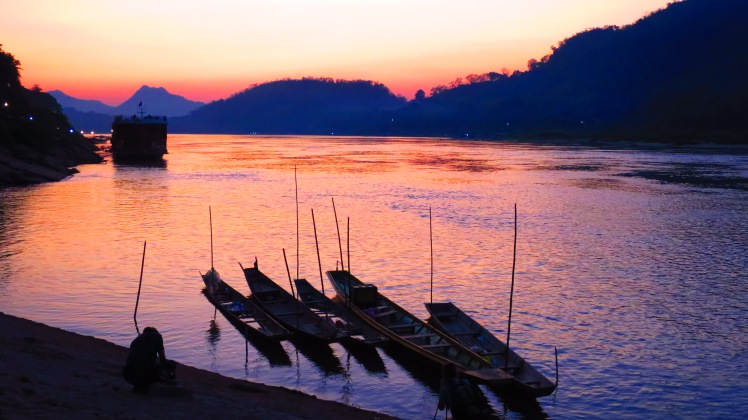 It is also a city made for walking. Leafy streets, river vistas and French colonial buildings make it really easy to lose a few hours wandering around.

Our hotel is across the street from the Mekong – this is one of our views.

An older building receiving a facelift. You see the odd crumbling home, but mainly, these French colonial treasures are being restored and beautifully maintained.

Luang Prabang is a UNESCO city, so named in part because of the 33 temples here. It may feel like a sacrilege, but we did not visit one temple our entire time. We passed by them, walked through the grounds, and took a few photos, but for the time being, we have become temple-saturated. I think when one begins to think, “Oh, another golden Buddha. Meh!”, it is time to concentrate on other attractions. So, for now and possibly until Cambodia’s Angkor Wat, we are taking a temple rest. The monks are a very large part of life here, and their 6:00 a.m. procession to receive alms has become a huge tourist attraction and in some cases, a disrespectful photo-op. We did not take part in the ritual, but we did snap own version of the “monk walk.”

Speaking of respect, we are finding that Laotians are conservative and quietly insistent about their cultural norms being adhered to. We removed our shoes at the front door of our hotel, and many stores and restaurants appreciate the same thing – there will be signs or proprietors will point to your feet if they want you to remove footwear. Equally important is the wearing of appropriate attire – we have seen this sign at a number of locations – the waterfall we visited, the bus station and outside a park. Seeing a woman in a bikini or cropped top (away from the beach) is akin to seeing her in her underwear – it is offensive to Laotians.  I have never understood why  men  walk shirtless on any city street. Keep Luang Prabang beautiful, I say.

We had the opportunity to watch the 1925 documentary movie, Chang, by the directors of King Kong. They lived with a Laotian family in their jungle home for 18 months to film their challenges as they battled encroaching vegetation, monsoons, crop loss and livestock loss from tigers and leopards. The final straw was a rampaging mother elephant, come to rescue her captured baby…and she brought back-up. The film was jerky and a bit hokey, as you might expect, but lots of fun to sit at an outdoor theatre, and be entertained by the soundtrack of Laotian drums. 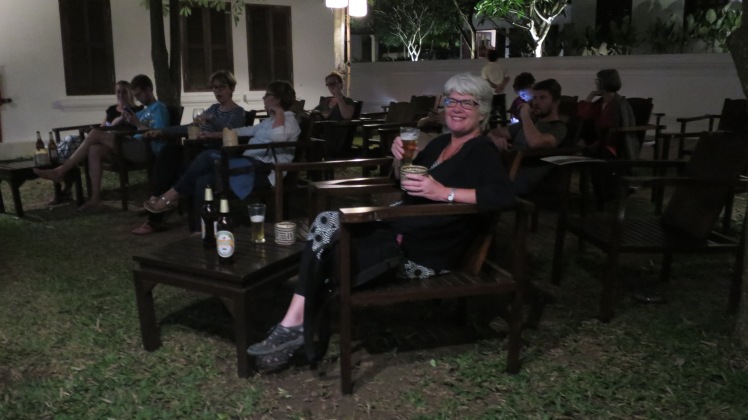 There is a price tag attached to all this grace and beauty. Luang Prabang is solidly on the map for older ($$$) travellers, and the restaurants, cafes and boutique hotels that are catering to that market have driven up the $15 guesthouses and the $4 noodle dishes. We have overshot our daily budget by at least 20%, but it will all even out in the end. For those with a bit more to spend, Luang Prabang is still an incredible deal for the quality of food and accommodation. This luxury hotel would cost well under $100 a night. 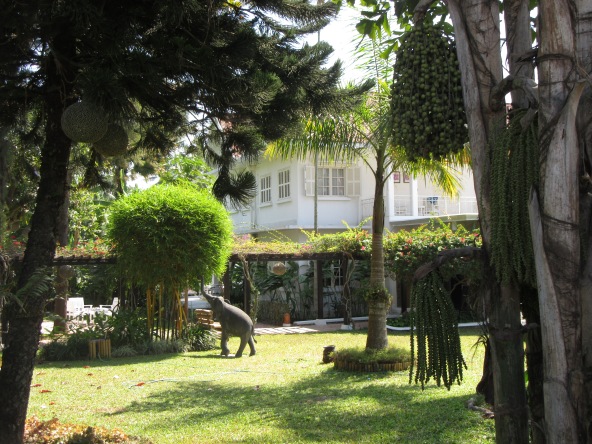 Since our Internet connectivity at our hotel was only dependable for five-minute intervals, we discovered Saffron, a fantastic coffeehouse and fair trade enterprise. Laotian coffee is really delicious (no Nescafe), and we got our fix (caffeine and daily news) courtesy of an Australian manager and his thoughtful crew. One of the coffees available is civet coffee – beans that have been ingested (and yes, harvested and cleaned) after they have passed through the civet (a cat/weasel-like creature). Since only a couple of kilograms are collected, this unique coffee is offered at $15 a brewed cup, or $50 for under a 3 oz. bag.

One of the must-do walks here is to trek out to the end of the peninsula, cross over on a bamboo bridge (that washes out every rainy season and is rebuilt each year), then walk a couple of kilometres on the other side and cross back again – this time on a motorcycle and pedestrian-only bridge. The view looking down to the bamboo bridge: 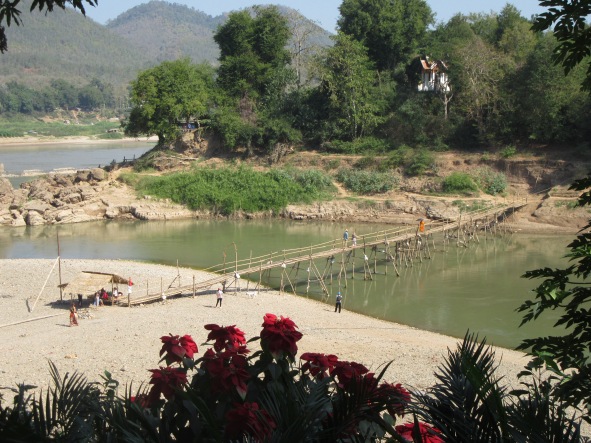 After a hot, dusty walk on the other side, we came to the motorcycle and pedestrian only bridge. The two are mercifully separated, but the pedestrian lane feels none too safe – thin, wobbly dry boards, with great gaping views of the river below.

Meanwhile, streams of bikes flew by beside us – schoolgirls riding sidesaddle, workers carrying materials, little families – a parade of daily life blasting by.

We decided to make the Wat Phou Si pilgrimage, which  is set on a mid-city mountain. It is accessible by  climbing hundreds of steps up to the top where the faithful gather to watch the sunset every night. At the base, it is possible to purchase bamboo cages with two tiny birds inside – the idea being to carry them to the top and set them free as the sun sets. We declined, but there were a few takers.  We walked up with a healthy crowd, with more people pouring up every minute until we reached critical mass. Girlfriends were climbing on boyfriends’ shoulders for better views, and people were climbing up on the stupa ledges. As the sun began to descend behind the mountains, a flurry of cameras and cellphones took over.

It was so hilarious – the sunset took a back seat to the crowd, which had become its own show. We’ve never seen anything like it. Good sunset though.

One of the big attractions outside of Luang Prabang is the many-tiered waterfall with its menthol-green/blue pools. We were skeptical – waterfalls this time of year can be underwhelming, and the convoy of minibuses and tuk-tuks meant it would be a crowd scene with nothing to do but take photos and buy food. (We did both in abundance.) However, the waterfall far exceeded our expectations. It cascades down over four  distinct pool areas – two are safe for swimming – and while the crowds were substantial, we were alone on the paths climbing up and had plenty of space in the pools.

That water is every bit as cold as it looks, although we both agreed that if it was Clark Bay, it would be “a 3.” (Insider knowledge for those of us who swam in the ocean off Gabriola Island.)

On the way up to the waterfall, we passed by a bear enclosure. These smallish moon bears have been rescued from the fate of poachers who capture them, keep them in tiny cages, and intubate them for their bile, for use in medicines. They have freedom to roam through a number of large enclosures, and they were all very playful and active while we were there. 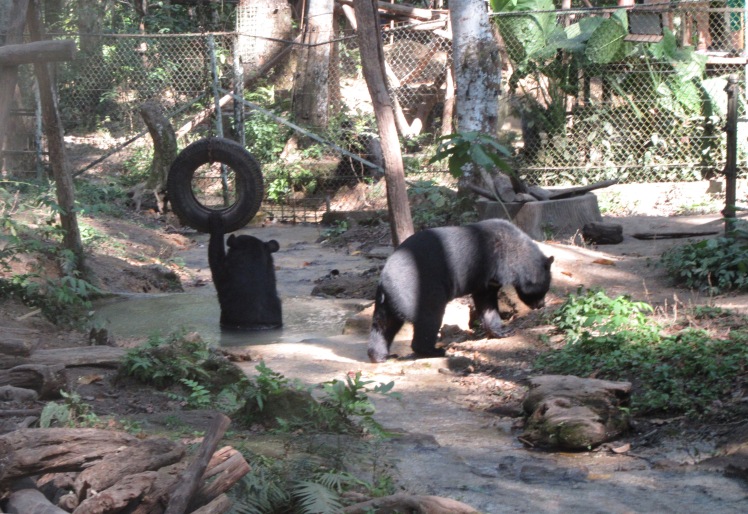 We could have spent a lot longer in Luang Prubang – it would be an ideal holiday if time was limited, and you wanted everything to be perfect.

Sorry for the late posting on this one – internet was an issue.  We will check in again soon.

20 thoughts on “Finding the heart of Laos in Luang Prabang”