Phnom Penh is changing at a breakneck speed. The city feels modern, bustling and full of life. Old buildings are being renovated and new buildings are springing up on every corner. Nonetheless, the bloody and traumatic history of Pol Pot’s Khmer Rouge regime still figures prominently.

The “attractions”  that most tourists come to see are the notorious Tuol Sleng Genocide Museum right in Phnom Penh, and the Killing Fields at Choeung Ek, about 14 km. southwest of the city. We wanted to visit both sites before we explored the rest of Phnom Penh, to allow us to put the rest of our visit here into context.

Please be warned: Contents of this posting will be disturbing to all.

Yesterday we visited Tuol Sleng, a former high school that was taken over in 1975 and turned into a prison known as Security Prison 21, or S21. This was the first stop for prisoners; an agonizing hell of interrogation and torture before being shipped off to The Killing Fields to be executed.

The Museum is excellent – dignified and sombre, with signs asking for “Silence”. Tourists are equipped with headsets and an audio account of the grounds, with each stop numbered and the capability to pause and return. We all walked in our own quiet bubbles, listening to  gut-wrenching stories and first-person accounts  from both survivors and former guards.

This is Building A, where some of the interrogations took place. Each room held a cot, shackles, and in some cases, floor tiles darkened from bloodstains are still visible. A photo of a victim was on each wall. Photos were not allowed.

In front of the building, there are 14 graves. When the Khmer Rouge were defeated, the prison was seized and they discovered 14 bodies that had not yet been moved to The Killing Fields. They are the only victims to have a final resting place with their remains intact.

The Security of Regulations. If any of these rules were broken, prisoners would be beaten even more severely.

Prisoners were typically intellectuals, government officials, artists, doctors, teachers, monks – anyone who lived in cities and might have the capacity and intelligence to counter the new regime. The Khmer Rouge wanted to re-structure the society by eliminating education and religion and returning all citizens to an agrarian society.
S-21 became the largest detention centre in Cambodia, and over 100 people a day were tortured, then killed. In total, an estimated 2.5 – 3 million Cambodians were killed, or died of disease or malnutrition during this period – about one-quarter of the population.

Methods of torture were described in great detail. The barbaric imagination of the Khmer Rouge cadres is shocking, impossible to fathom.

This method of interrogation involved tying the victim’s hands behind his back, and hanging him upside down, suspended by his hands from the beam until he passed out.
To revive him, the guards would lower him face-first into the jars on the ground, filled with water and human feces.

Water tortures were common – dunking victims in ice water and subjecting them to a type of water torture we have all heard about called waterboarding.

Women were subjected to sexual torture, including having centipedes inserted into their vaginas. Their children were often murdered in front of them.

A showcase of the instruments of torture and paintings depicting various torture scenes hang throughout the museum.

Photos were taken of every prisoner, both before and after their torture. I will include a photo of the before shots and spare you the ones taken later.

In another building, the Khmer Rouge had punched through old classroom walls and built tiny cells where prisoners were shackled to the floor, with a small metal box for their waste. Photos and biographies of Pol Pot and his head henchmen were displayed, as well as details about past and ongoing trials. None of them have ever admitted to the genocide.

Although the photos and images and words are sickening, the museum is a sacred place. I wondered if it would feel voyeuristic, but it was quite the opposite.  The victims and their terrible fates are treated with great respect and the museum and Killing Fields are bearing witness.

The monument in the centre of the grounds is surrounded by granite blocks that contain the names of all the victims that passed through here.

Today we hired a tuk-tuk to drive out to Choeung Ek Genocidal Centre, also known as The Killing Fields. What I didn’t know is that Choeung Ek is the best-known killing field in Cambodia, but not the only one. There are over 300 sites where bodies were disposed of in mass graves or in shallow ponds. The dots on the map indicate where most of the sites are located.

The museum was very difficult to go through because it is compact and the atrocities are in front of you immediately, and don’t let go the entire time.

Visiting The Killing Fields felt a little more diluted, if such a word is possible in this context. Spread out over several acres, it is easier to slow the pace and absorb what you are hearing in your audio set (same excellent set-up as at the museum).

Again, signs are posted asking people to be quiet, and almost everyone complies, lost in what they are hearing and seeing.

The tour began at the area where the trucks would arrive from S-21, full of beaten and terrified victims. Almost immediately, they would be executed, but because the Khmer Rouge did not want to pay for bullets, most of the victims were bludgeoned to death. 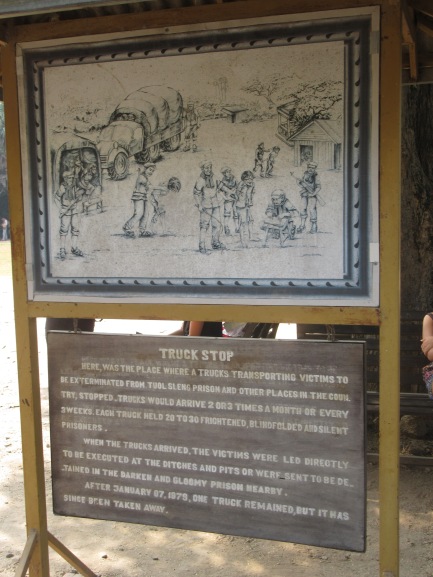 Their bodies were tossed into huge mass graves.  The fields are filled with indentations like this; an indication of where each grave was, and how they have filled in again since their excavation. More than 8000 skulls were retrieved, as well as teeth, bones, and clothes. There is a display holding remnants of cloth that were salvaged. With each season, cloth and bone continues to emerge from the ground. 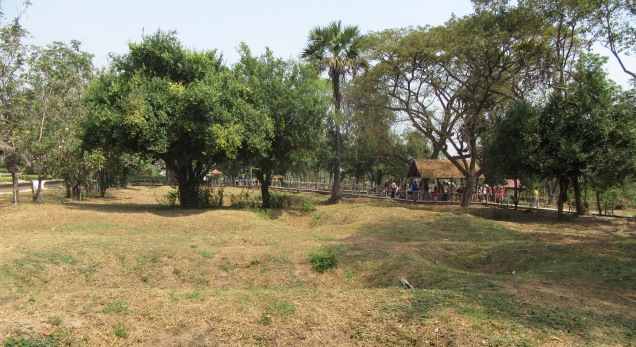 Mass graves that were more particular  (women and children only, headless, etc.) are marked  and covered, like the one below. Visitors have left thousands of bracelets as tokens of remembrance. Stephen removed one of his bracelets as well and left it behind.

One of the sites that was the most difficult to bear was the “killing tree.” Babies and toddlers were murdered by being swung by their feet and having their tiny skulls bashed against the tree. Their bodies were then tossed into the pit behind.

The following tree holds its own special horror. Victims were held in one area, while each execution took place and then moved when it was “their turn.”  In order to mask the sounds of the victims screams, the cadres attached a loudspeaker to this tree and played music full blast. 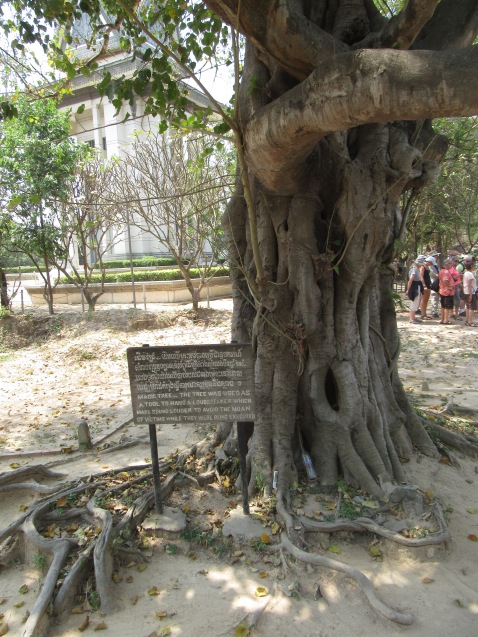 We ended the tour with a visit to the memorial stupa. This contains the skulls and remains of the more than 8000 victims. 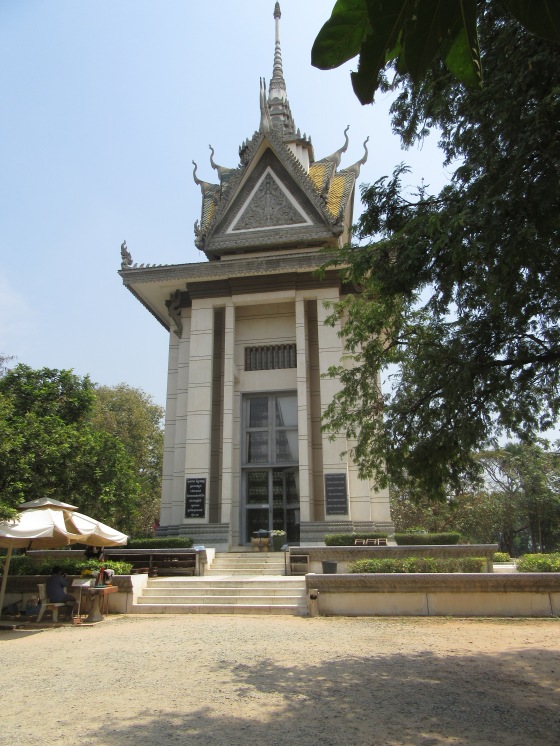 Murder weapons are displayed, followed by skulls and then  bones. It is possible to tell how the victim died by looking at their skulls – pierced by a bayonet, clubbed with a wooden stick, or slashed with a knife or ax. Coloured dots on the skulls identity gender and  method of murder, and the skulls are arranged according to estimated age.

This sign to the side of the memorial stupa is a reflection of the intention of the museum and Killing Fields – a way to respect and honour the dead.

Atrocities are impossible to understand. Stephen and I spent a great deal of time trying to wrap our heads around such brutality.  Evil paranoid people, given the right circumstances, can galvanize the masses.  Xenophobia, looting, destroying works of art, denying religion – those are easy to figure out. But how do great numbers of people, no matter how oppressed and disenfranchised, inflict such suffering on innocent people, on children? What is their breaking point?

No answers. Both visits were difficult, but we are so glad we went and learned more about a piece of history we knew little about.

Puerto Morelos, the Riviera Maya where we are having a sun and sand vacation. As well as participating in conga line dance celebrating a faux wedding...it is a story. #rivieramaya #sun#congaline #leavingourselvesbehind #beach
Winter has fallen in Fergus, Ontario. Currently, the temperature is -2. Not really cold, but It has been at least few years since we have spent time in any winter weather. #winter#fergus#snow#leavingourselvesbehind
A niche food concept I was not aware existed. Anyone thinking it has franchise potential?#coffee#toast#whistler#bc
Train Wreck @ Whistler Village, BC. It happened in 1956, the train was going twice the recommended speed. 7 cars were damaged and pulled off the tracks into the woods so the train line can get back into service. Obviously, the cars have become a destination for graffiti artists and tourists. #trainwreck #whistler#bc
Atlin, British Columbia a community at the end of the road. It is in Northern BC but has to be entered via a road from the Yukon. It is a charming and very independent community surrounded by a spectacular landscape. #atlinbc #northernbc #atlinlake #sunset#leavingouselvesbehind#yukon
The Atlin, BC pioneer cemetery with its terse description on the headstones describes the hardships, hope and often early death of the early settlers. They travelled great distances with hopes of gold discovery while enduring many struggles to survive . #atlinbccanada #gold#hardship#hope#northernbc#leavingouselvesbehind