We haven’t had to deal with Winnipeg’s famous mosquitoes because we have been dealing with cold and rain instead. But they’re coming… and the city is ready. They will begin their fogging program soon – spraying vulnerable areas to try and keep the staggering numbers of skeeters under control. At that time, dogs and children are advised to remain inside – poison being spread for the greater good.

As well, trees are banded for cankerworms – the battle against nuisance insects is vigilant.

Our weather, which started out in such promising fashion a week ago, has turned on us. We’ve been dogged with cold and rain and winds since we left Grasslands. Naturally we would prefer sunny and warm, but since we are a nation of weather-kvetchers, this feels right.

The last time we were in Winnipeg was 25 years ago, visiting dear friends who had moved here from Toronto. They rented a fabulous home on a leafy street, of which Winnipeg has no shortage (fabulous homes and leafy streets.) This time, we are staying on the 3rd floor of an old house in an Airbnb on Spence Street (an “emerging” neighbourhood, according to our host). It’s very cute and compact – Stephen describes it as having a “first apartment” feel. We spent a day walking around the nearby neighbourhoods and were struck by the variety of homes and the beauty of the treed boulevards and gardens. Winnipeggers are spoiled for choice.

Winnipeg appears to have considerable wealth, judging by the number of very exclusive homes. We walked past this “gated” neighbourhood, flanked by stone pillars. 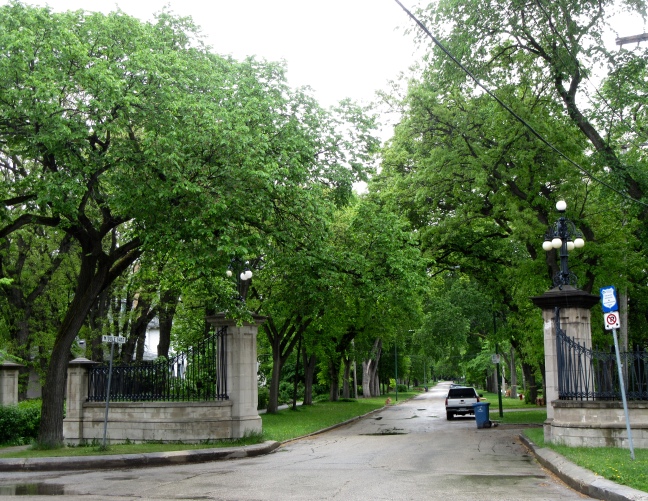 A couple of blocks away, we headed up Wellington Crescent, one of Winnipeg’s “addresses.”

Many homes looked like this one – imposing and stately. 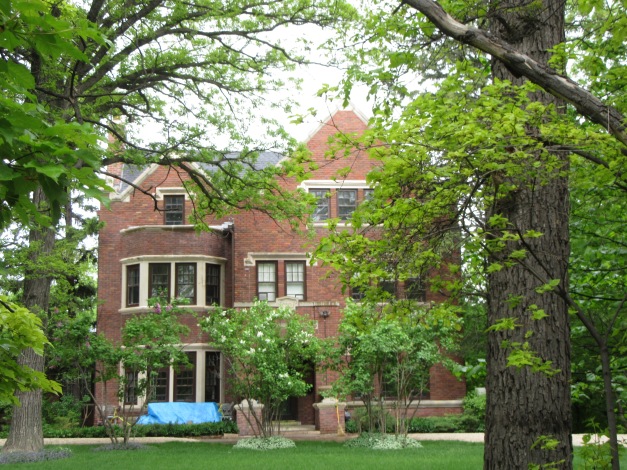 I loved this barn and silo construction – faithful to the prairie landscape, right down to the native grasses in front.

In fact, much of Winnipeg shows really well. It has a bit of a reputation as “murder capital”, and it still feels edgy, but as for being in actual danger? I think Winnipeg’s rep may be more perception than fact.

We drove past the famous intersection of Portage and Main several times. From past references, I was sure we would find a desolate no-man’s land, populated by sketchy characters and pawnshops. (That can be found further north).  Portage and Main is ringed by banks and insurance buildings and is right in the heart of downtown. 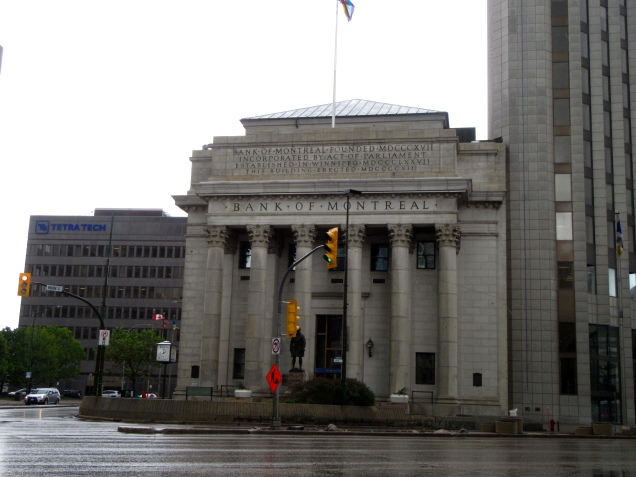 The Legislature Building is as resplendent as would be expected, including a floral tribute to the 2017 Canada Summer Games. 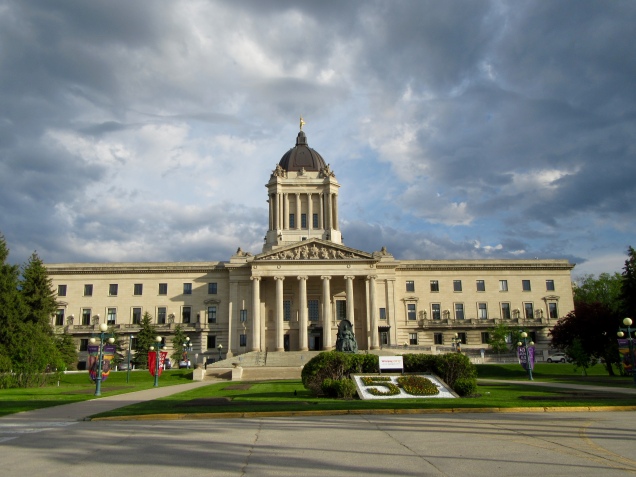 We missed a lot of the Exchange District – due to the miserable weather we were unable to walk around much, but we did do a drive-by. The Exchange District is the historic centre of the grain exchange, and its 20-block area has over 150 heritage buildings. Home to theatres, shops, restaurants and condos, this is a very exciting neighbourhood that envelops history with modern-day.  We passed by two theatres that perfectly illustrate the feeling of this area – the old Pantages Theatre: 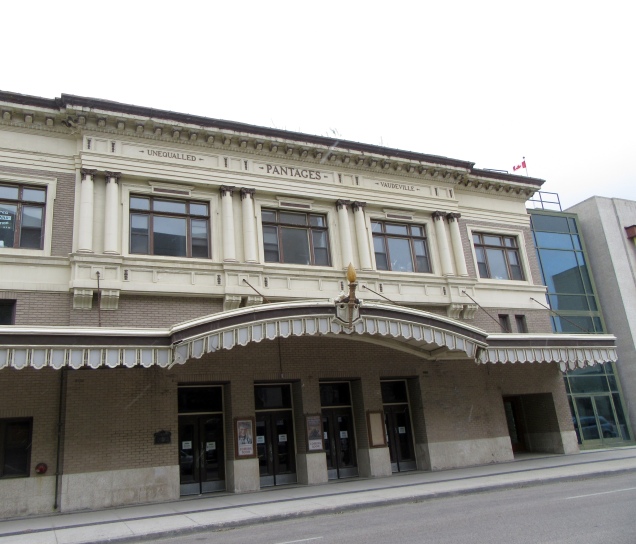 …and the newer Centennial Concert Hall

The VIA Railway Station is close by – we walked through and it reminded us of Union Station in Toronto.

Unlike Toronto’s station, this was eerily quiet – the next train not for several hours, and almost no-one around. It gave us a chance to admire the tiled floors, the stone columns and the domed ceiling. 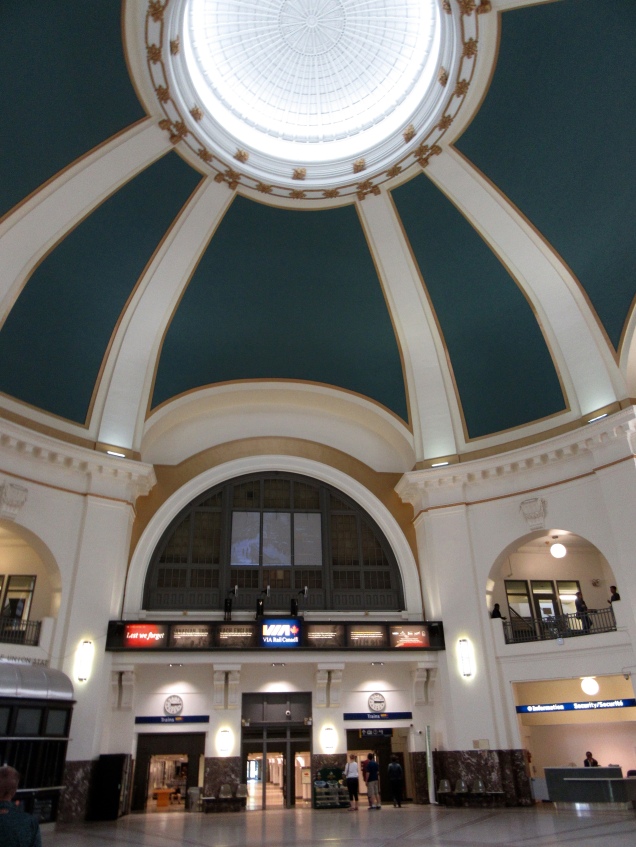 We walked through to The Forks, which has been an aboriginal meeting place for over 6000 years. It is right at the confluence of the Red and Assiniboine Rivers and today has a market, shops, restaurants, performance venues and miles of parks and walking trails along the river. We checked it out the first day we arrived, when it was actually sunny and the place was packed.

The Provencher Bridge leads pedestrians over to St Boniface, the French part of Winnipeg, and the final burial spot of Louis Riel, the famed leader of the Red River Rebellion.  We walked across the bridge, then turned back again to The Forks – planning on visiting later. We never made it back – we just ran out of time.

This was our first glimpse of the Canadian Museum of Human Rights. 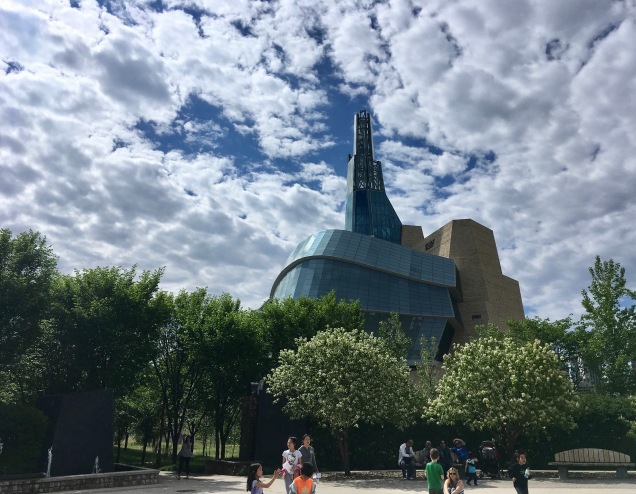 We stopped to watch this young man practicing parkour (the discipline of running up and around obstacles, often upside down, before landing.)  His impromptu parkour structures are part of a celebration circle, to honour the ancestors who gathered there centuries before. 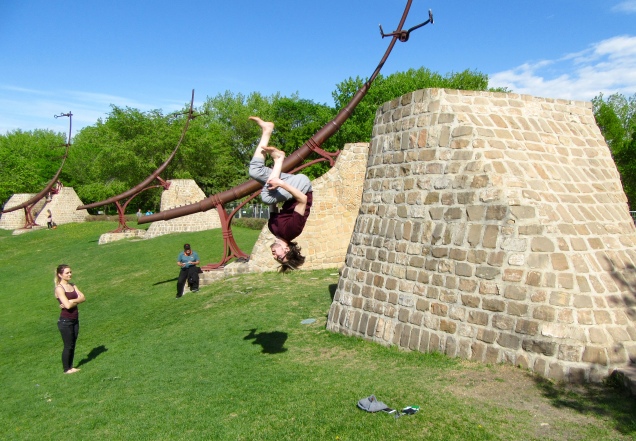 Aboriginal culture (and issues) are quite dominant in Winnipeg. Just behind this circle is  a very different circle – a memorial to Manitoba’s missing and murdered aboriginal women and girls.

We walked by this arresting billboard – proclaiming outrage at the silence surrounding indigenous genocide. I don’t understand the symbolism and would love to find out if any of you have any ideas, or know the artist.

Metis artist and activist Jaime Black began the REDress project in 2010, in which she hung installations of red dresses to begin the discussion of over why over 1200 murdered and missing aboriginal women and girls have received so little attention. She has had exhibits all over the country, with hundreds of red dresses donated to her art. One of her exhibits is on display in the staggering Canadian Museum of Human Rights.

We spent four hours at this museum today, and it took every drop of energy we had to get through it. It is wrenching to see what we have done and continue to do to one another.  The notion that there is no “other”, that we are all equal, has been very slow to come. We did not walk away feeling we have made much progress.

This is a must-see museum – it has achieved greatness on all levels – from the architecture to the content within. Architect Antoine Predock designed a building that would literally and figuratively take one from darkness to light.

The twists and turns of the ramps parallel the human journey. (You can also take the elevator, but it felt like a necessary part of the experience to climb the ramps.) 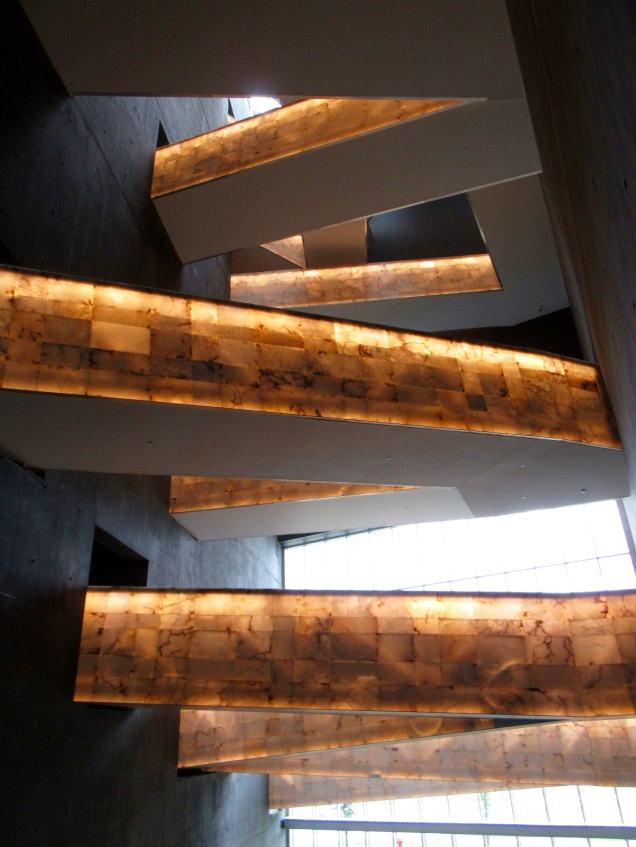 Dealing with the question of human rights, the term generally refers “to the rights and freedoms we have simply because we are human”. It need not be more complicated, nor equivocal than that, but as we travelled through the floors, we understood that while the notion of human rights has been trammelled throughout history, it has not stopped.

Human rights touched on many areas, including Canadian indigenous perspectives, language rights, protecting rights, the Holocaust, breaking the silence, taking action, and inspiring change. Much of this was powerfully portrayed through art, interactive exhibits, videos and personal anecdotes.

Another important element of human rights is one’s willingness to speak up in the face of injustice. Holocaust survivor Elie Wiesel said it most eloquently. 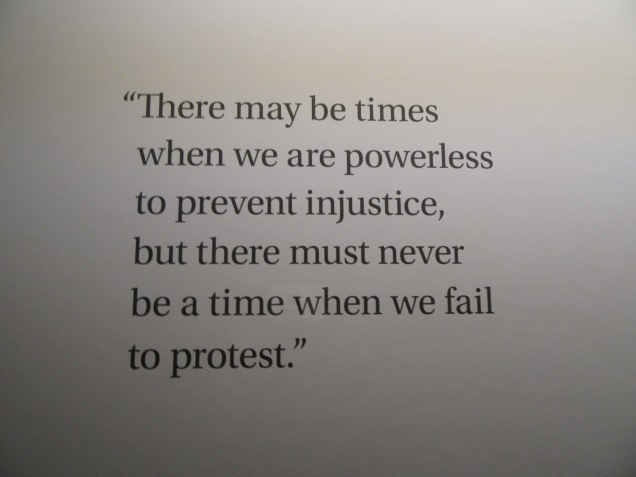 Winnipeg is so many things – a hotbed of artistic creativity, a bedrock of history and a place of protest and activism that spawned the Winnipeg General Strike of 1919, which resulted in the labour movement. We could easily have stayed for another 2 or 3 full days – we’re leaving so much undiscovered.

12 thoughts on “Winnipeg: so much more than mosquitoes”