Philippe Halsman used that phrase “astonish me!” to challenge his collaborators to greater things. The photographer of over 101 LIFE covers, among many other things, was one of the main exhibits at Musee des Beaux-Artes in Quebec City.  He was a master at unmasking celebrities and capturing their essence. This is one of Marilyn.

Halsman worked on many projects with Salvador Dali, including this famous photo.
Explanation of how this photo was accomplished below:

This fabulous museum is a must-see, if you have more than a couple of days in Quebec City. It is spread out over four buildings, and requires more than one visit to do it justice.

The museum focuses on notable Quebec artists, including Jean-Paul Riopelle, Fernand Leduc, Alfred Pellan and Jean Paul Lemieux. This is one of the latter’s moody paintings. 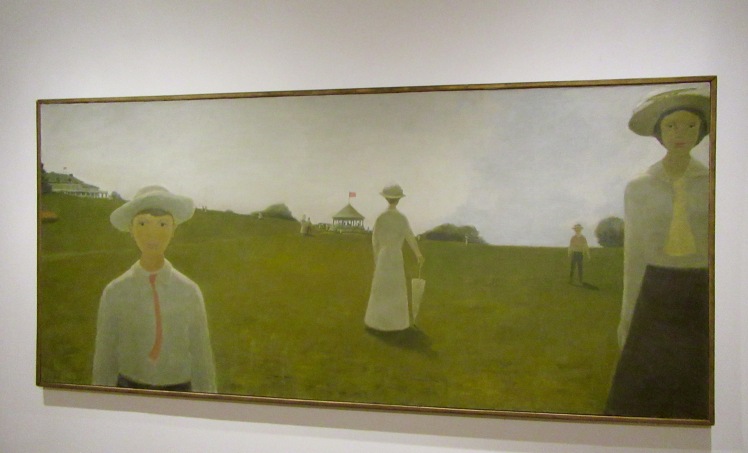 We’ve all seen contemporary art that makes us shake our heads and wonder, “Why is a marine blue canvas hanging in a national museum? ” I asked the same question of this one below, knowing with certainty that with masking tape and a few tins of paint (only in far better colours), I too could be an artist of note.

The explanation of this painting may help clear up the confusion.

The grounds outside the museum include sculptures and imaginative landscaping, including this “framed painting”. An interesting project to remember for when we once again have a home: plant a shallow box, throw on a frame and prop it on an easel.

I have so much to show you that I can’t possibly go into all the historical details of Quebec City. We were just there for two and a half days, so we concentrated on just being in the streets and enjoying the show.

A young circus couple busking in one of the squares.

One of the many caleches riding through the streets of Old Quebec.

The parts of Quebec City you are likely to visit will be Quartier Petit-Champlain ( the lower part of the city by the St. Lawrence River), Vieux Quebec ( the walled area of the city that includes the Citadel, the plains of Abraham and the Chateau Frontenac), and perhaps the area just outside the walls – Grand-Allee/Avenue Cartier.

A quick story: We had booked a room in Vieux Quebec – just $120 a night (should have been our first clue), with $14 a night parking (standard for Quebec). When we arrived, we were dismayed to find a hotel with dismal lobby, peeling paint, smelly carpets and a room that faced a fire escape and air conditioning that didn’t work. We were offered another room, which was worse.  The hotel owner essentially told us to leave when we complained (which we were happy to do), except that now we were in Quebec City at 4:00 pm with nowhere to go. After a few disheartening stops at other modest hotels, (all full at $250 and $300 night), we located a hotel across the harbour at Levis and were happy to find a spacious, clean, quiet room that gave us an excuse to take the ferry across. This was our view from the ferry:

The ferry crosses over in 12 minutes and drops you in lower Quebec, which is like landing in Europe, complete with (for us) foreign language.

Stone buildings and overflowing flower baskets are pretty much a theme here.

Quebec City is noted for its fabulous restaurants – Lapin Saute is one of them. It wasn’t outrageous in price – a nice lunch would have been about $60 for two.

Right beside this restaurant was a sweet little park, complete with chairs and shade.

When we were in Southeast Asia, we were quite amused at how choreographed the tourist photography was – coquettish poses, jumping in the air, etc. This Asian woman was fascinated with the wall mural, and executed a number of poses to mimic each scene. Stephen snapped this photo just before she leaned down to fake a slap shot. 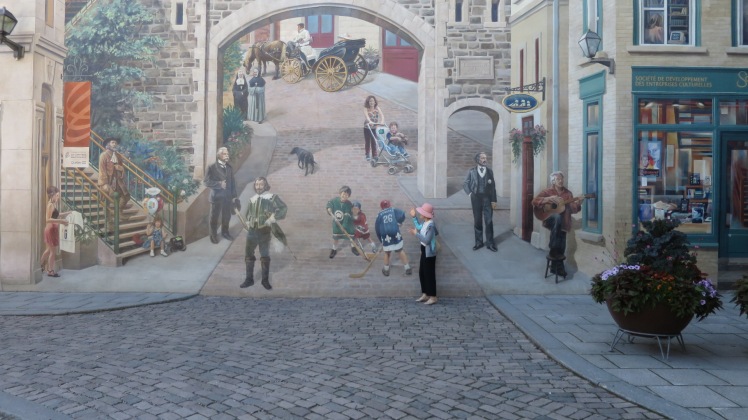 There are two ways to get to Vieux Quebec (upper) from Petit-Champlain (lower). You can walk up many, many stairs or you can take the funicular. We walked.

The view from the top, looking down over the harbour and Lower Town. 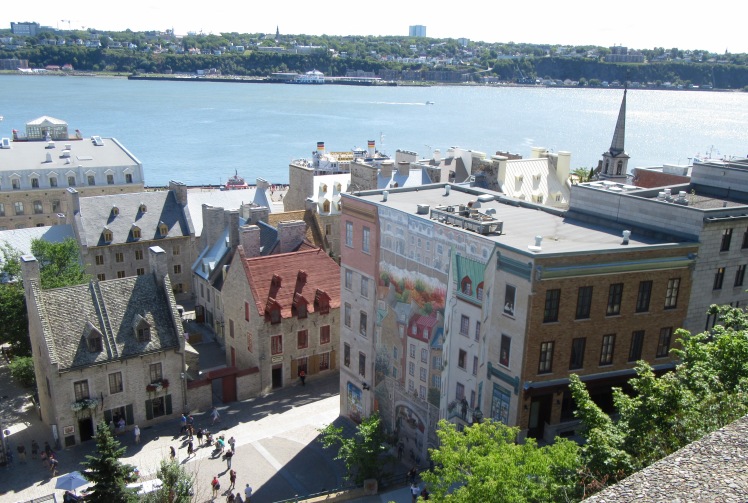 At the top, the mighty Chateau Frontenac – the showpiece of the Quebec City skyline. 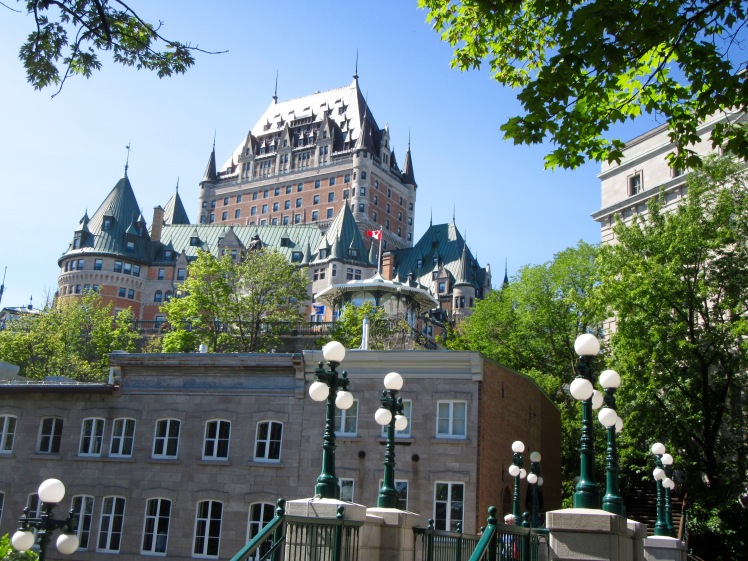 The area around the Chateau is buzzing with activity. We listened to music, sat and people-watched and marvelled at a Dali sculpture – such an incongruous sight in front of  this stately grand dame. 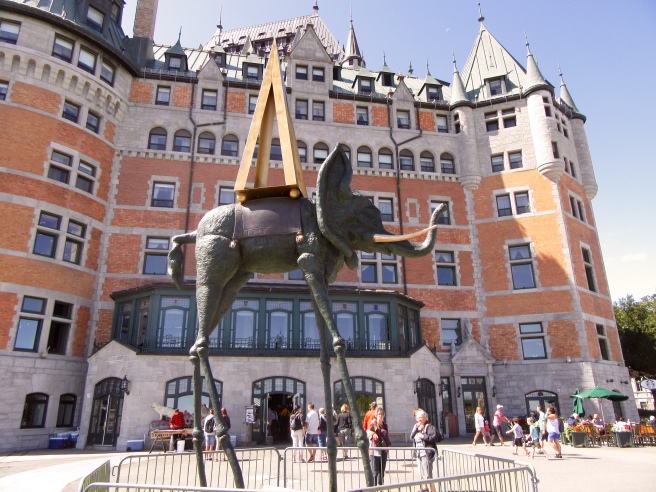 Naturally, we went inside. With room rates running $400-$600, we were surprised that the lobby was not more luxurious. The chairs were a bit worn and the valet was a bit cranky. I guess the gawking hordes of non-guests becomes terribly tiresome – our baby strollers and fanny packs and plastic water bottles don’t set the right tone. Still, the Fairmont Chateaux are Canada’s pride and we all feel entitled to them.

Vieux Quebec is contained within thick, high stone walls. The Citadel and Plains of Abraham are to the left of the Chateau Frontenac – we wandered the grounds but did not take a tour – we had done that on a previous visit. We probably walked every street inside the walls, or at least it felt like it. Be prepared with good walking shoes and be ready to climb very steep hills. The rewards are worth it. 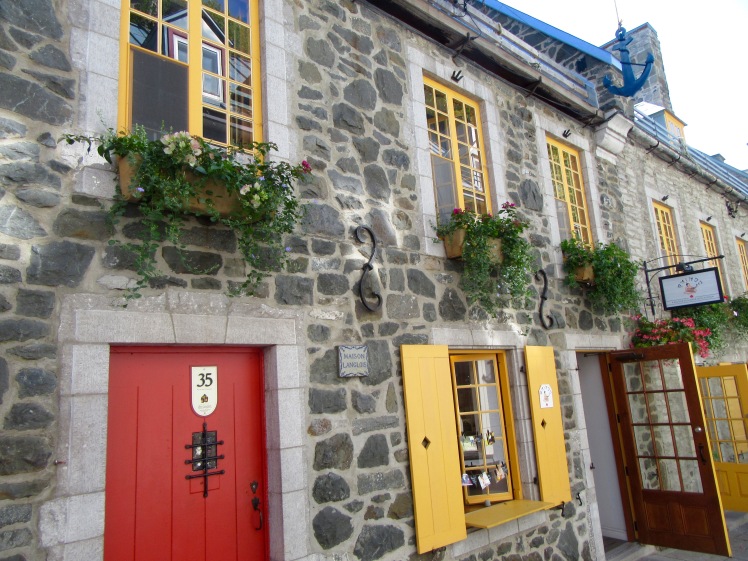 Outside the walls and down Grand Allee is an area well worth visiting. It is still very much “old Quebec”, but is a little more of a neighbourhood.

Who wouldn’t want to live in one of these charming flats? These trademark iron staircases can be found all over the province – hell on moving day, but a space-saver with buildings that come right onto the sidewalk.

A typical corner store, (or depanneur), selling the essentials – Pepsi, beer and wine. 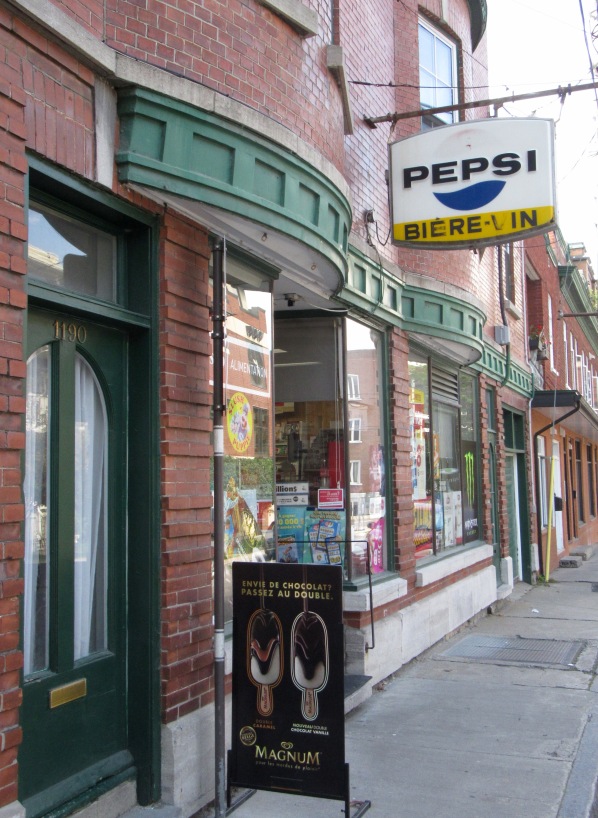 Another typical sight – outdoor dining – flower-filled patios tucked in every nook and cranny in Quebec.

A number of shops were dedicated to furs. With a history of hunting and trapping and long, cold winters, fur coats appear to have made a respectable comeback in Quebec.

As dedicated as they are to preserving and honouring their past, Quebecers are very much in the present. 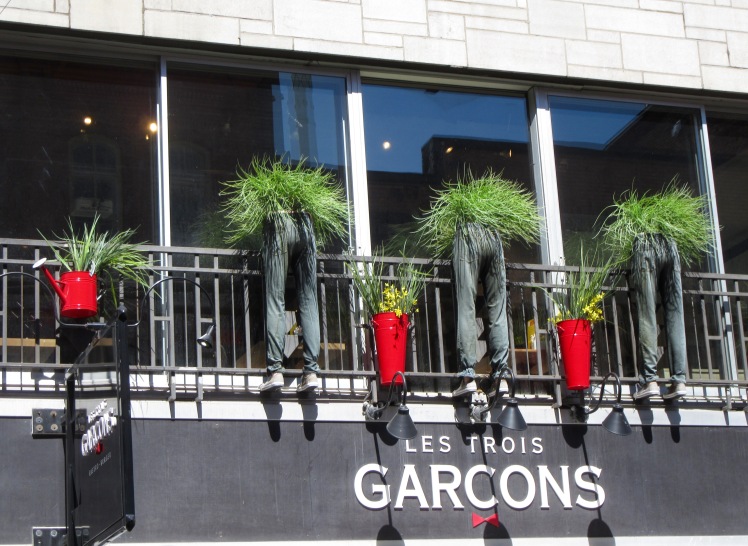 A final photo from Lower St. Lawrence, taken on our drive from Gaspe towards Quebec City. The landscape got softer, the mountains disappeared, and the north shore of Quebec came into focus. It set the tone for arriving in a city that is like no other and a province that is indeed “a distinct society.”

We have barely scratched the surface in Quebec – a la prochaine.

On to Ottawa to see friends; slowly we are making our way back home.