I feel I am an accidental tourist in India; which, when you think about it, is a heck of a mistake if I had been hoping to go to Portugal or Greece instead (my first choices).

India was Stephen’s idea, one that I warmed to very slowly, and then veered between being wildly enthusiastic and slightly terrified. That emotional see-saw continued until we were flying to Delhi and it was too late to turn back.  Sure, visiting a 4000-year-old culture would be fascinating, but there would also be garbage-strewn streets, extreme poverty, extreme heat and rats to contend with. And yes,  so far, there have been all of those things. We have now been in India for four days, and on our first day here, I saw two rats – both dead, but rats, nonetheless, including one who was photogenically splayed on a sidewalk with a bird pecking at its innards. “Don’t look,” said Stephen.

Our trip began pleasantly with a 14-hour non-stop flight from Vancouver to Delhi, and a brief and uneventful sail through customs. Not the chaotic scene I had imagined.

You’ve all read about the life-threatening smog enveloping Delhi at the moment. This is no exaggeration – the air is a thick grey-yellow, and the smell is noxious. There are measures in place to try and mitigate it, but the volume of traffic and people and industry is what it is – it is hard to imagine how it can be measurably improved.

To give you a bit of an idea of the air in mid-afternoon (the sun is obliterated) – this was the view from our hotel window. We were also hosting a large family of pigeons.

Our hotel and our room were lovely – large, luxurious, marble everywhere and included a lavish buffet breakfast – all for $119 CA. A similar room in North America would have been double that price. We wanted to treat ourselves to a decent room the first night as a bit of a buffer from jet lag, culture shock  and the after-effects of a long flight.

Security at our hotel was interesting – our taxi had to stop for a check, including an under-carriage scan. Suicide bombers enroute to the Radisson? Our bags were put on a conveyor belt and scanned and both Stephen and I were frisked. Service after that was impeccable and welcoming.

The next day we headed back to the airport to catch a short flight south to Goa, where we will be for 10 or 11 days.  We were advised by friends to head south for two reasons: the north is very cold in January, and the south would offer an easier transition to the country. We were welcomed by a striking sculpture of one of India’s most revered practices.

Security had two lineups – Ladies and Gents.  Men went through the usual screening, but women were ushered into a curtained area to be frisked in private. India is frequently described as being a country of contradictions, and this was the first one I observed. In a country where women’s rights are still hard-fought and their personal safety is frequently at risk,  this old-fashioned approach to the sanctity of womanhood seemed odd to me.

Our plane ride was another matter. Filled with excited and rambunctious Indian families headed for a beach holiday, it was a party. Most of the passengers clapped and cheered both at take-off and landing, and then pretty much pushed one another off the plane.

Our first stop is Panaji – state capital of Goa. Goa was under Portuguese rule for 500 years, and those influences are evident everywhere. Panaji is a very small city circling around a river, with a number of stately old mansions, wrought-iron balconies, and mosaic doorways in its Latin Quarter. This is the area we are staying in, and our hotel – Caravela Homestay is situated in a pretty colonial building. 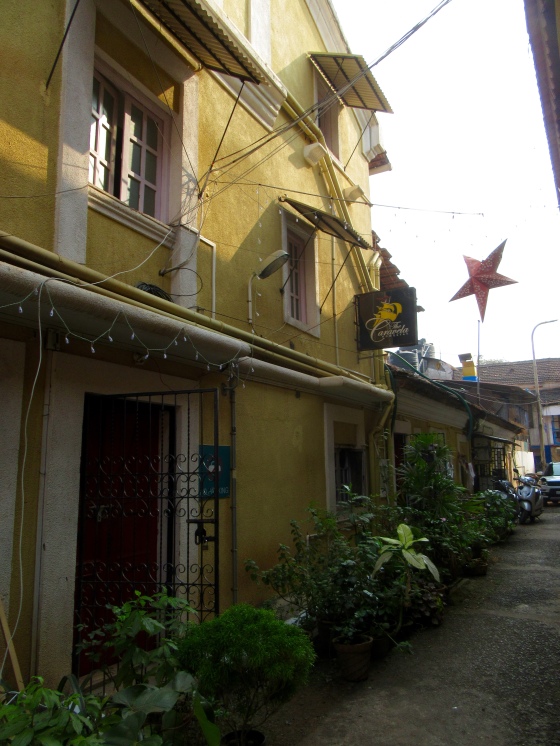 Hosted by the charming Carlos de Noronho and his sons Carlos Jr  and Cyrus, this small inn was a perfect “soft landing” for us. Carlos told us that Goans are different people; Indian to be sure, but with Portuguese names and many of them Catholic rather than Hindi or Muslim. Most Goans speak English very well.  The state of Goa is quite laid-back and the residents are less conservative than many of their countrymen. I imagine we will observe that even more once we are at the beach communities.

As we wandered the town on our first full day, we could easily have imagined we were in   Portugal. 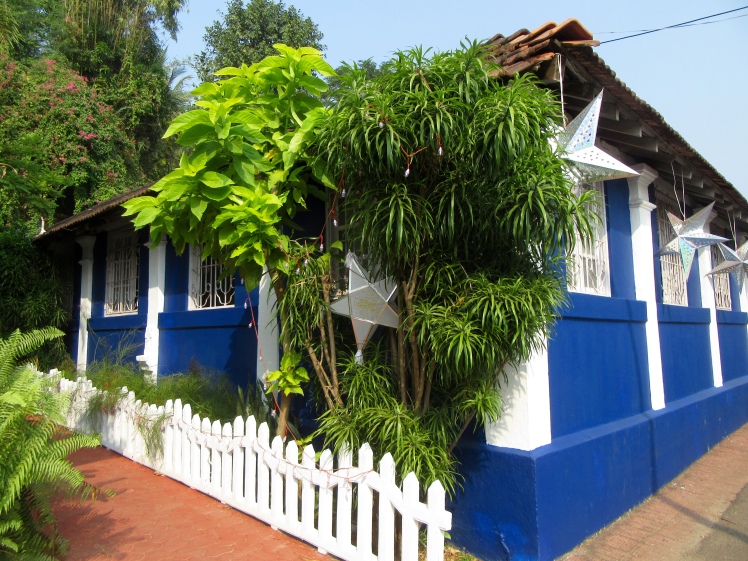 There are a number of higher-end shops and restaurants in Panaji that cater to a western clientele. 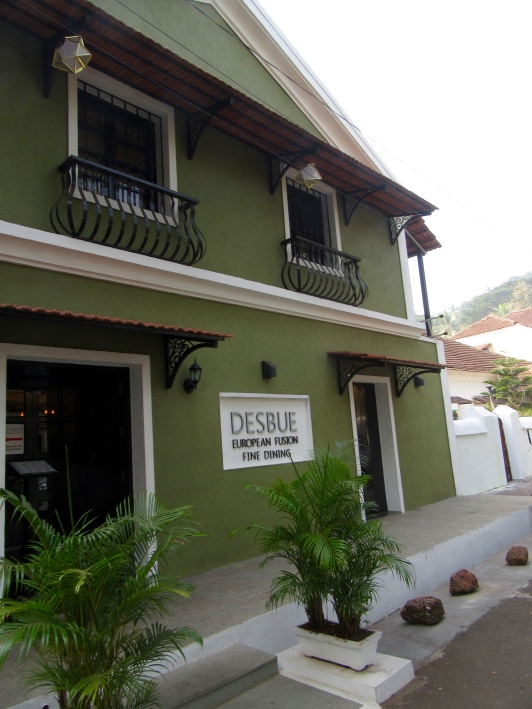 Colour in India is intensely saturated and inspiring – no such thing as colours that clash. From the walls to the art to the  splendid saris –  such beauty. Why would you want to trot out your wrinkled old beige cargo shorts?

Getting lost in Panaji is half the fun. We wandered around a number of back alleys; each turn brought something unexpected,  such as this ancient motorcycle that is quite possibly still operating.

Much of the beauty is crumbling and some buildings are absolutely beyond repair.

Other old mansions appear to be either inhabited by squatters or fenced off for eventual renovation.

You cannot walk for long in Panaji without being accosted by a hopeful taxi driver. We were told that the cab and rickshaw drivers here charge extortionist rates, but the town is small enough that walking is both preferable and far more interesting. 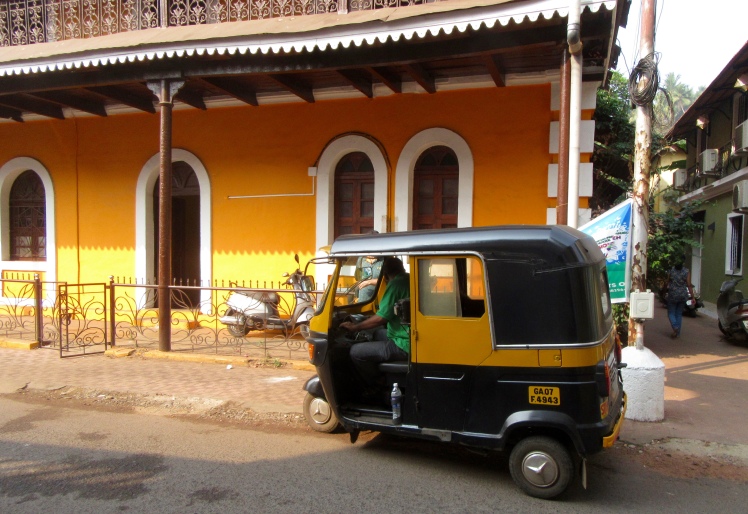 The centrepiece of Panaji is The Church of Our Lady of Immaculate Conception dating back to the early 1600’s; a frothy white confection  set high on a hill overlooking the city.

While Panaji is apparently cleaner than many other Indian cities, it still has piles of garbage littering the streets. Government initiatives are in place to try and encourage behavioural change, although perhaps the tone of this one needs a bit of softening.

This sign is a gentle reminder to be  respectful of those tasked with cleaning up the mess.

And then there is this one, positioned atop an apartment building in front of the bus station, complete with graphic illustration. Good grief – a bizarre twist on poop and scoop. 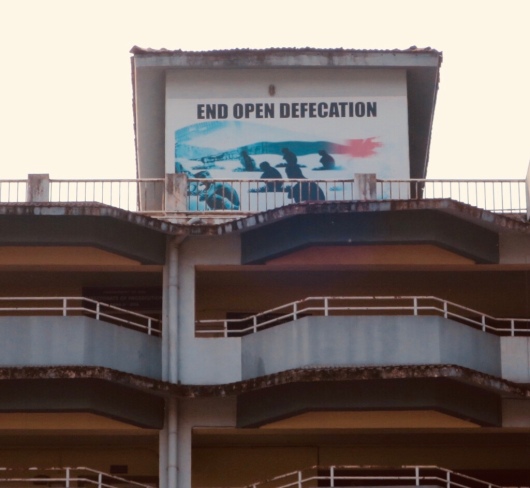 It is obvious that attempts to clean up are in the works. For so many reasons, that change is slow to come. This has as much to do with common practices as it does with simple hygiene. Our hotel owner was telling us that as a middle class begins to emerge,  travel is a new phenomenon for a number of Indians. He still provides a bucket and pail in each bathroom as some Indian tourists do not know what the shower head is for.

We took a little bus out of town to Old Goa, the settlement that was the former capital until cholera and malaria outbreaks forced that abandonment to Panaji in the 1600s. Some of the remarkable churches and cathedrals are still there.

We visited the remains of St. Francis Xavier in the Basilica of Bom Jesus; famous throughout the Catholic world.

Across the street, the Se Cathedral offered an imposing presence, but by this time it was so hot that we could barely make a sweaty perambulation around the perimeter. At 76 m long and 55 m wide it is the largest church in Asia.

Our bus ride out and back was amusing. The first few seats at the front are assigned – ladies on the right, disabled and senior citizens on the left and the rest – kids, couples and men in the back.

We passed by a ferry with an innovative approach to unloading: cars are required to back up off the ferry ramp to disembark.

Tomorrow we leave for Palolem Beach, part of Goa’s famous beach area south of Panaji. We are really looking forward to a solid week of beach time, which will give us a chance to digest India so far.

Our impressions so far? BIG adventure. There is not a whole lot that is casual about India, it commands your attention. At times, the smells of garbage and urine and human waste can be overwhelming. It feels inhuman to walk past beggars. I’m leery of the stray dogs, but they mainly sleep on the sidewalks.

The food beckons. We’ve begun easily with delicious curries and butter chicken and dal and lentil soup. There will be lots of food photos in upcoming posts as we branch out and try different dishes.

33 thoughts on “Waking up in India”