Oh, I know what you’re thinking,”can’t wait to hear all about the palaces.” I promise you this post will have so much more; Mysore is our first big Indian city and there are lots of interesting things to tell you about.

Such as: There is no shame in pretending you are Indian royalty. 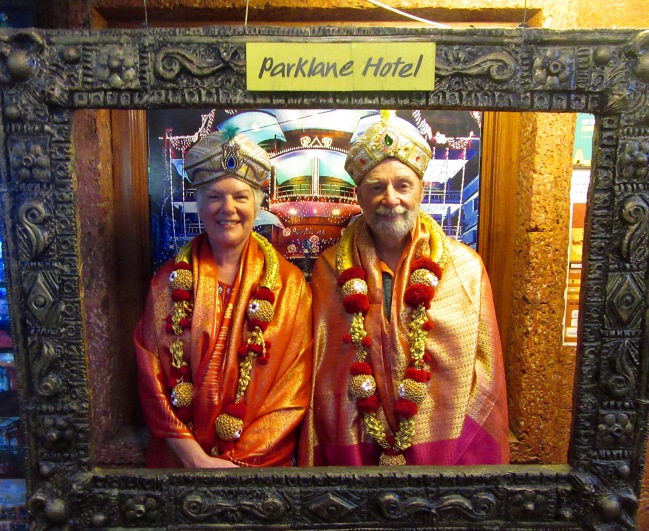 As much as we have read about the many scams at work in India, didn’t we fall prey to one on our very first day here. We were approached by a tuk-tuk driver who wanted to show us the “old market” for 30 rupees. ( 60 cents). We were tired from hours of walking and gratefully climbed in and rode along for about 10 minutes – into a neighbourhood we might otherwise not have discovered on our own. Much of Mysore’s centre area streets and alleys look like this – at first glance rather sketchy but in fact simply modest. 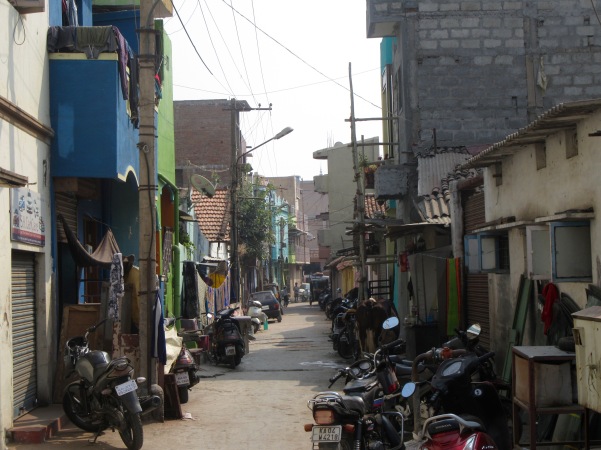 We passed by several little structures like this – not much more than lean-tos. 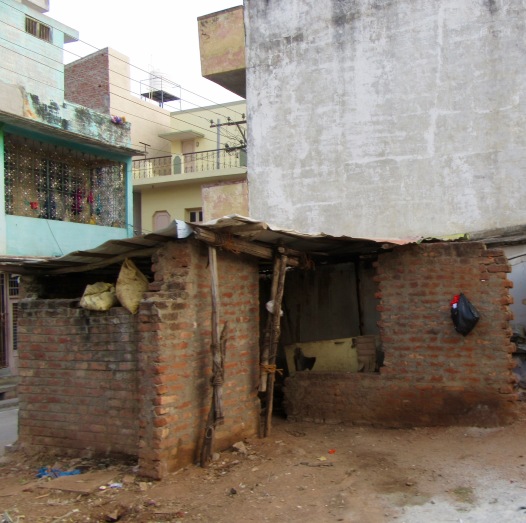 A quick stop at the “special market” and then the scam unrolled – we, the guileless tourists, were escorted to some shops that will kick back a decent commission to the driver if there are sales. First to  a shop where rosewood was being carved and polished. The tuk-tuk driver assured us the white inlay was wood but when I picked up a small piece of plastic cut from the “wood inlay” off the ground, he said nothing. 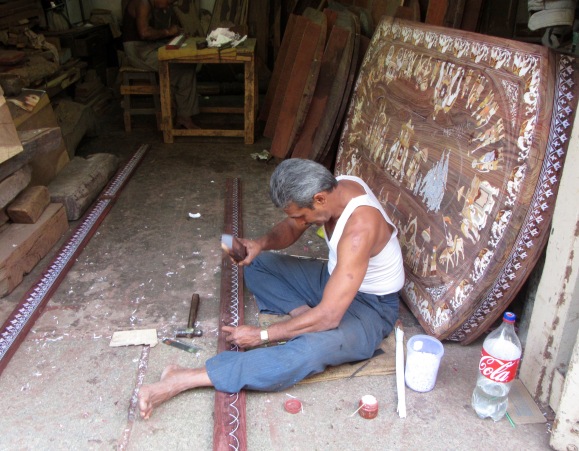 Next up – An aromatherapy shop where we were greeted by three very excited people. Before we knew it, we were being swabbed with sandalwood, black jasmine, ylang-ylang, geranium, etc.  Stephen was laced with some essential oil that promised  (with a wink) to give him “eight hours of manhood”. Tempting, but prices started at $60 for tiny vials so we had to disappoint them. It was awkward. 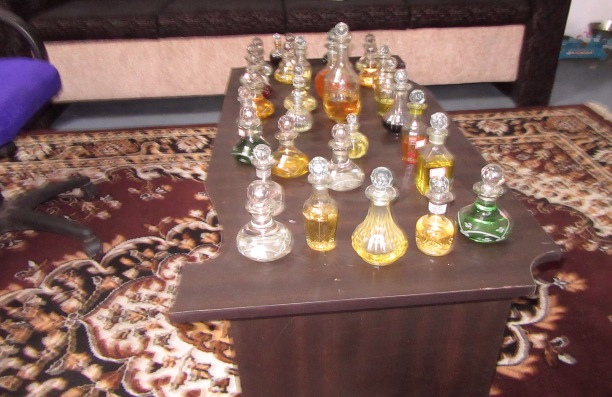 Somehow I have managed to reach this stage in life and still be surprised to discover that not all people are honest. Being in India requires constant negotiation and second-guessing –  a big push-pull game of Let’s Make a Deal. We have money and they want it. They will tell you what you want to hear (your laundry will be ready by 5:00) and they will blithely overcharge you on just about anything. We are learning how to haggle without being insulting – not wanting to rip off or be ripped off. You never really know. Stephen developed a deep fondness for these luscious potato buns, filled with onion chutney and served warm. He has paid 10, 15 or 20 rupees, depending upon who was behind the counter. That felt more comical than anything else – a lovely family business with no malice intended. 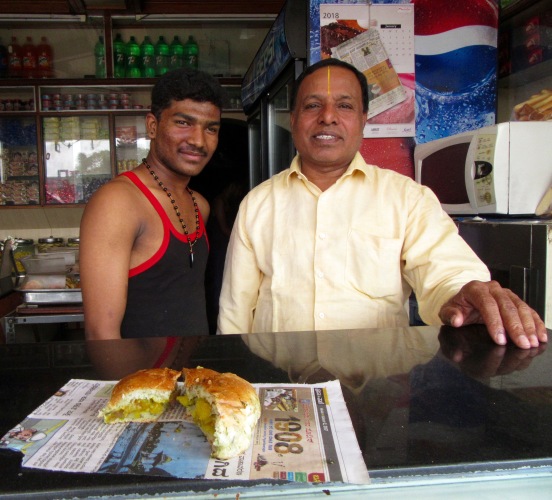 I am coming to terms with my situation in India now that we are out of beach-y Goa. Our hotel in Mysore is in a Muslim area (we awaken each morning at 5:30 am to delightful call to prayer) and many women are dressed in black burkas.Our first morning here we ventured out to explore the back streets and soon raced back to our hotel.  I was treated to several disapproving stares as well as that nasty tongue-clucking sound that makes me want to pick up a rock and throw it. My crime was wearing a knee-length, scoop-neck, sleeveless dress. I grabbed a shawl, wrapped it around my shoulders and went out again without a problem. The other issue is legs – they need to be covered or at least mostly covered. I bought these pants which are very fine cotton, incredibly comfortable and cool, and roomy enough for a few more veggie pakoras, but I’m not happy. 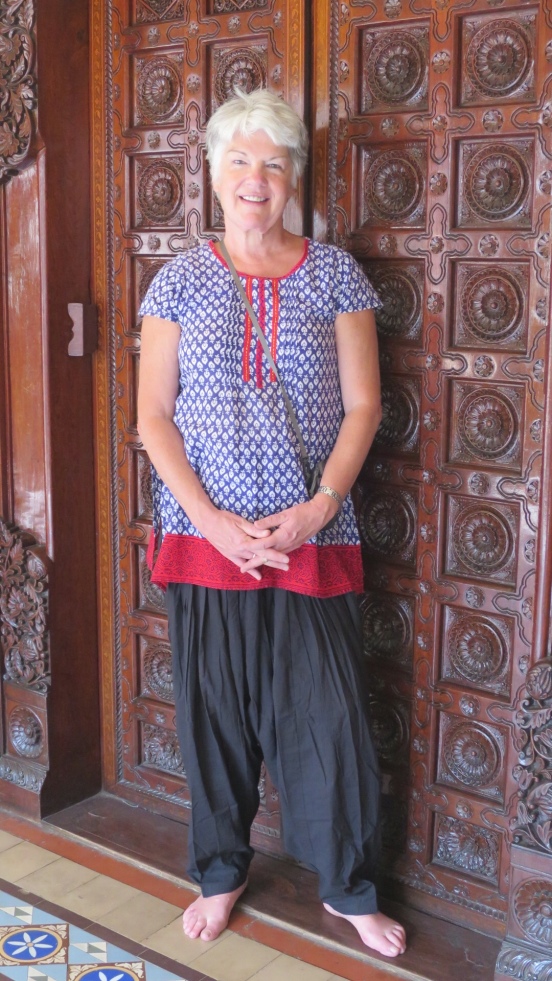 I’m not happy with the bold stares, the open contempt, and my feelings of discomfort. I am a visitor to India and as with any other country I want to respect their culture and customs, but it is such an unpleasant feeling to be judged so harshly. To clarify – most of my encounters with Indian men have been positive and warm. I believe the divide is a fundamentalist religious one as well as an uneducated one. The educated moderate Indians do not hold those views toward women – they are gentle and kind.

I discussed this with a gentleman here who warned me to be very careful, especially up north in smaller towns and villages, where a woman’s smile or gaze is interpreted as an invitation to have sex. With or without consent.  Clothing choices would obviously also be an issue.

Currently,  in many states in India violence has broken out over the release of the movie Padmaavat which has offended the sensibilities of some Indians to the point that cars have been torched, a schoolbus full of children was stoned and several women had to be stopped by police as they were planning to self-immolate. A reward has gone out for the delivery of the nose of the lead actress.

I may not be happy with my status here but you can bet I’ll be keeping those feelings to myself. So…with that off my chest, on to far more positive things. Like, the palace.

Mysuru Palace is one of the big tourist draws – a staggeringly impressive structure that was home to the maharajas and has interiors worthy of one of India’s premier royal buildings. 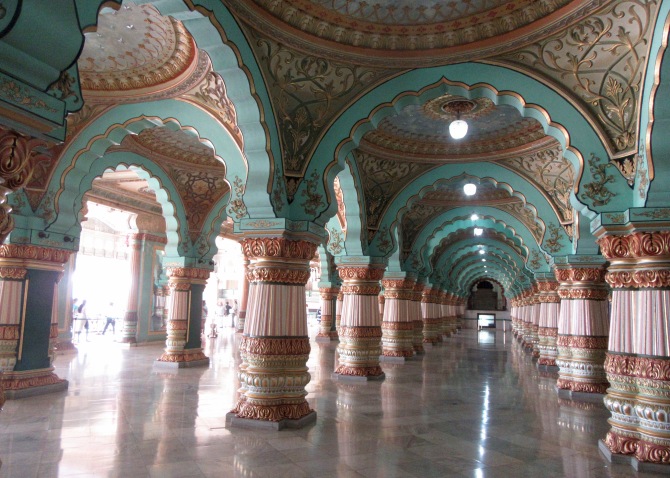 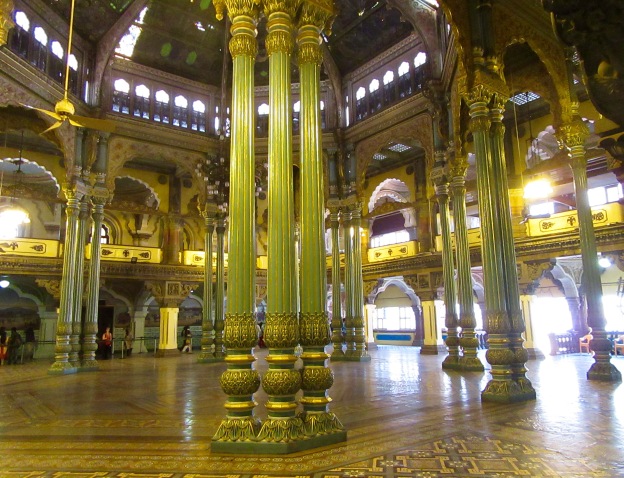 One of the interior courtyards 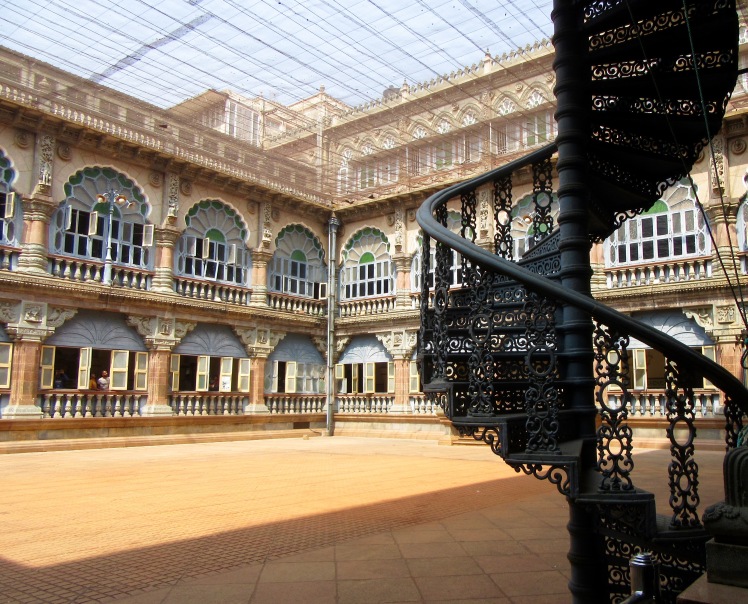 The side entrance to the Palace 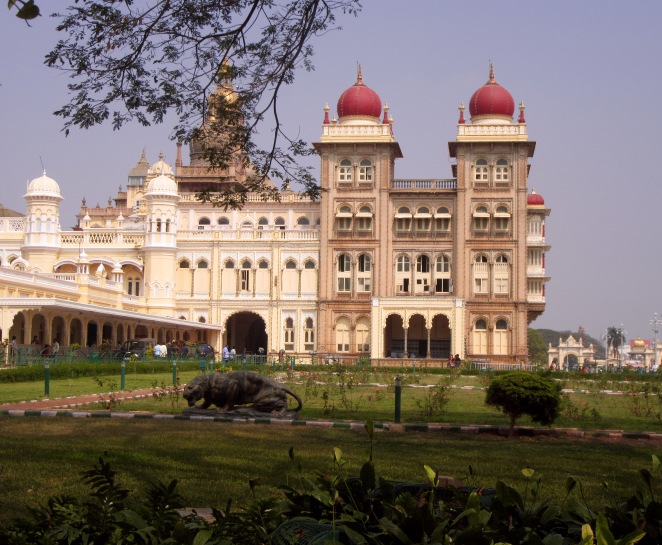 St. Philomena’s Church is another Mysore attraction – a Neo-Gothic Catholic cathedral that is currently under restoration and was covered with scaffolding and tarps. I didn’t take any photos but while we were inside the crypt we spent a few minutes checking out the names. “Captain and Mrs. Ross”; “Federico Coelho” – mostly Portuguese and English names, with a smattering of Indian. I noticed a couple – Barbara Gordon and Tony Gardon – and wondered at the obvious typo engraved in marble for perpetuity. It would make me so upset to imagine a similar fate would befall me when my time comes and I would be laid to rest as Ginny Muller.

And on to the marvellous Devaraja Market of Mysore – a photographer’s delight.

This scene repeated itself dozens of times – we loved the elegance and strength of these women. 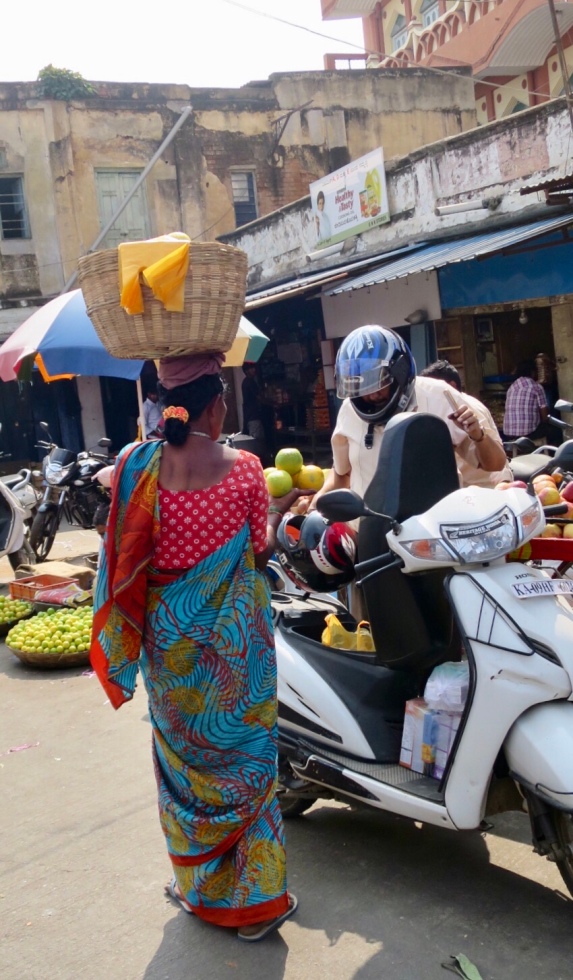 For all the squalor and disorder outside the market, the stalls are a study in geometric perfection. 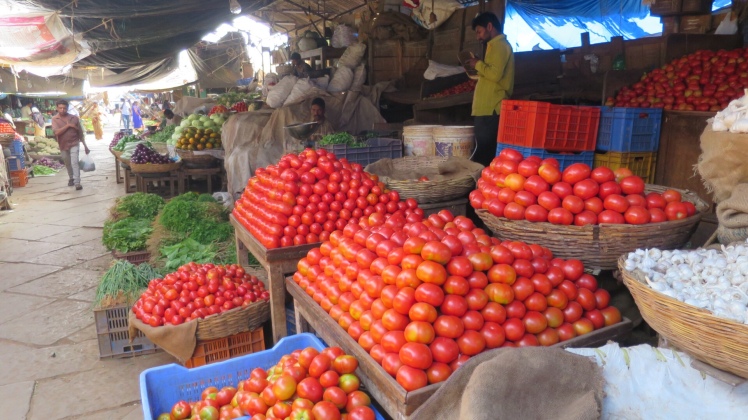 I love red onions, but back home they are often too big or a bit mushy. These were just perfect. 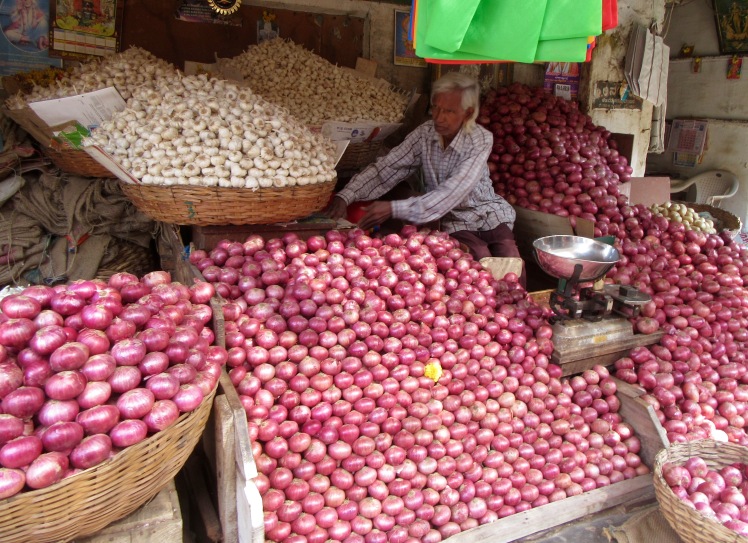 The heaping cones of kumkum, which are the coloured powders used for bindi dots. 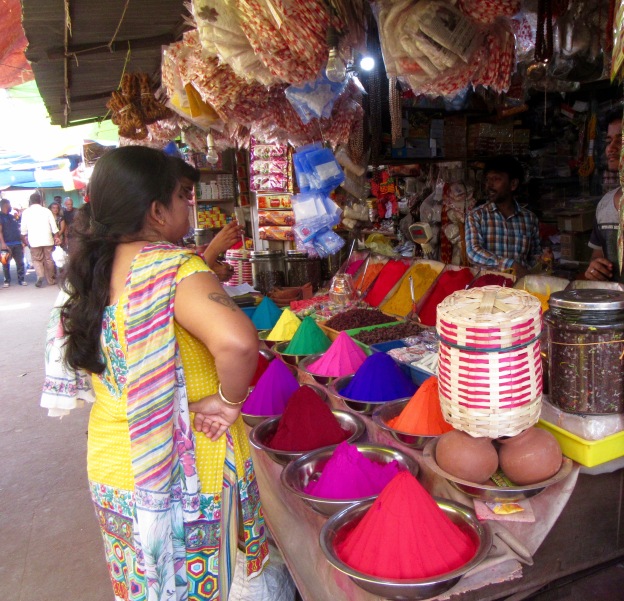 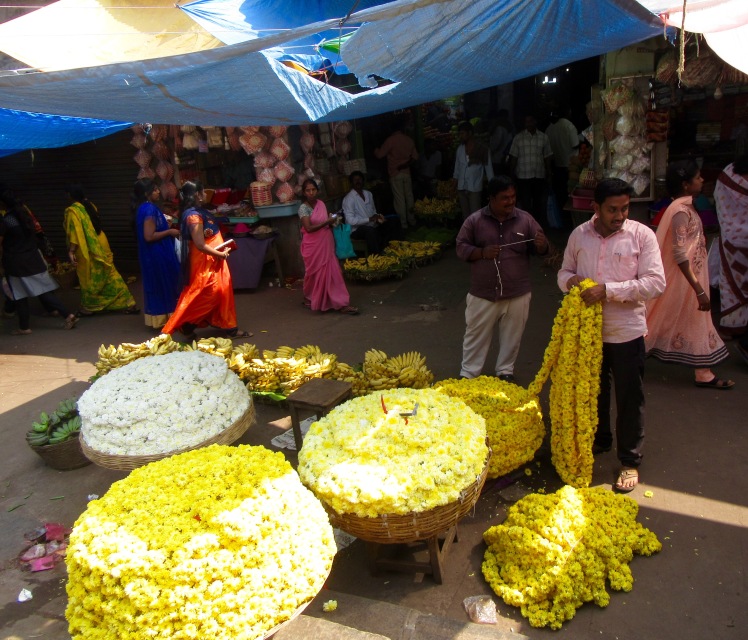 Incense, especially sandalwood, is quite particular to Mysore, as are many essential oils. 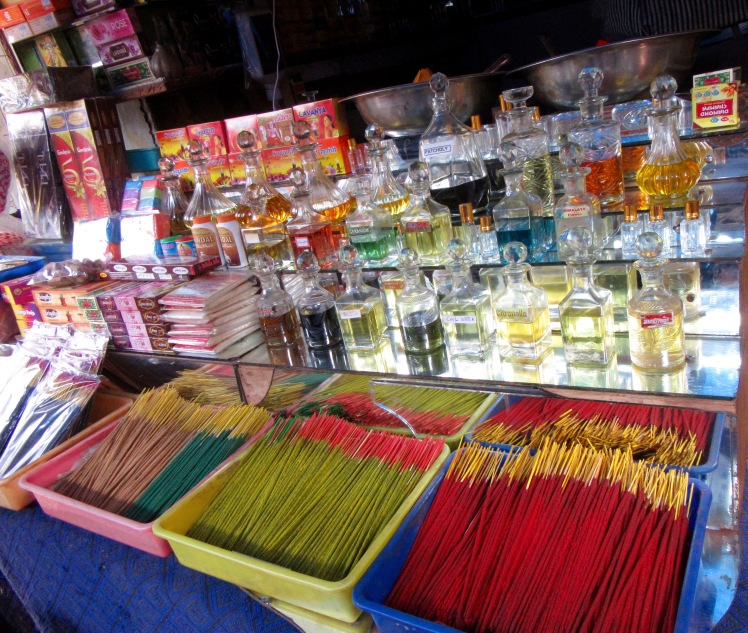 This scene could make a vegetarian out of me. The chickens were being slaughtered, plucked and cleaned right on the counter, in the heat, with the flies swarming. As much as I love meat, I will try to stick to vegetarian dishes for our stay, as FoodSafe is not a thing here. 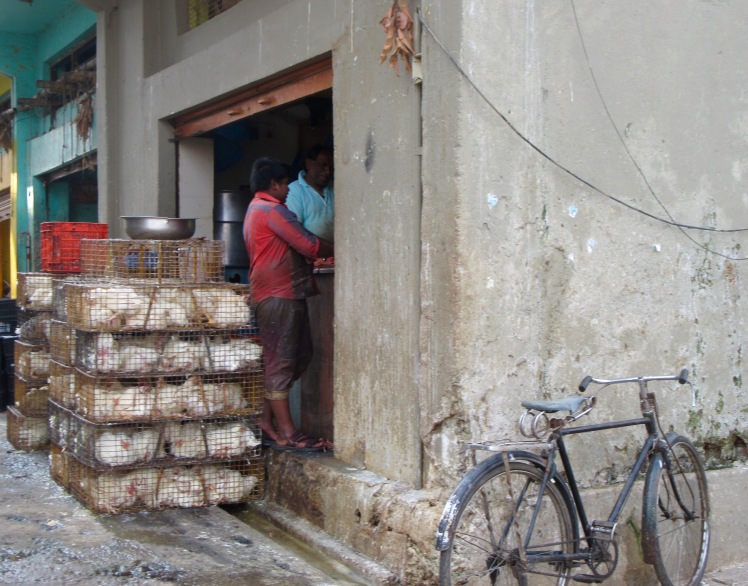 And Gandhi – his skinny, bespectacled golden figure standing guard over the madness of roundabout traffic. 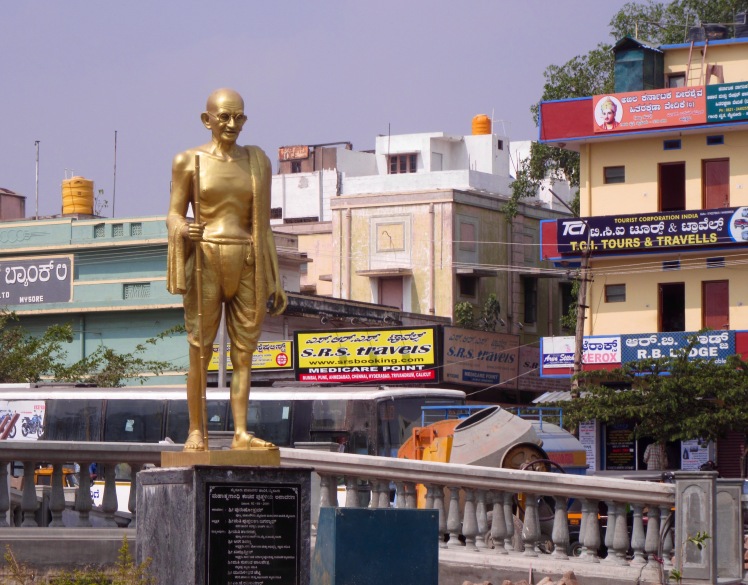 Traffic – how does it work? In India you drive on the left side of the road, unless you prefer to drive on the right. In that case, you cut across three lanes of traffic and go wherever you please. Cars, trucks, buses, motorbikes and tuk-tuks zoom along with inches to spare and no-one hesitates – as in SE Asia, it flows. One of our new friends in Hampi advised us not to drive in India. “Too stressful for foreigners.” We wouldn’t know where to begin.

The van you see on the left? He will simply drive through the line of motorbikes. The concept of  “After you. No please, I insist – you go first.” does not exist here – either on the road or on the sidewalk, or lining up at the ATM. 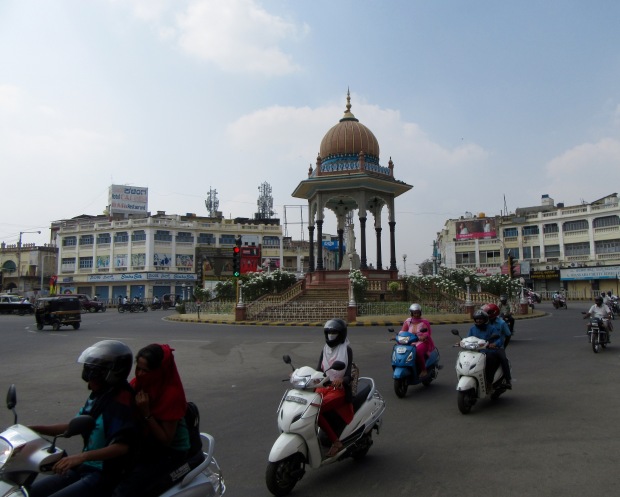 We kept seeing black and yellow cows and finally asked someone. There was a festival last week and the cows were coloured yellow as part of the celebration. 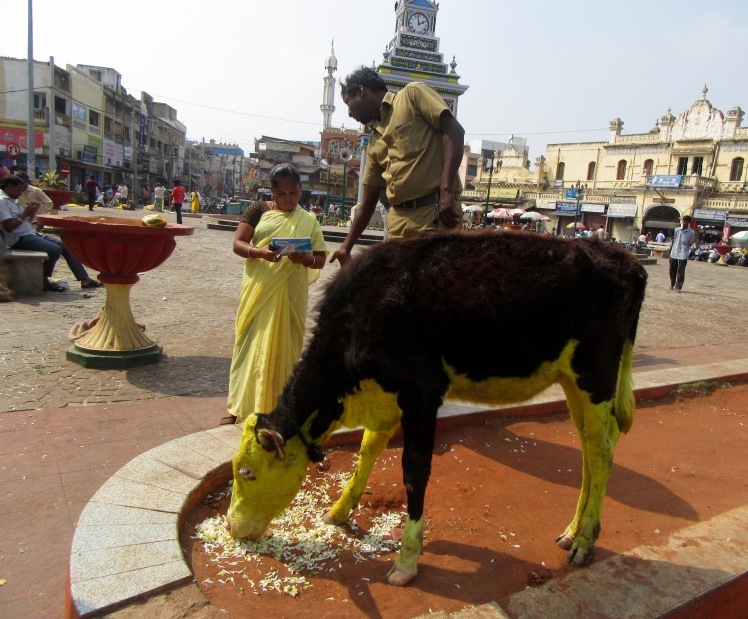 I stopped these young women to ask them about their tops – it is not easy to find tops that don’t go to the knee or longer. While the clothes here are exquisite, I’m trying to find things I will wear again in Canada. We had a nice chat, followed by the inevitable selfie. 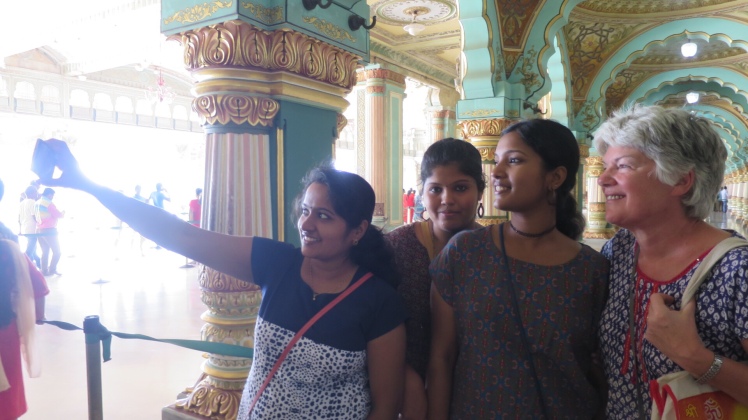 We hired a tuk-tuk again to take us to Chamundi Hill where there is a sacred temple and the usual complement of monkeys. 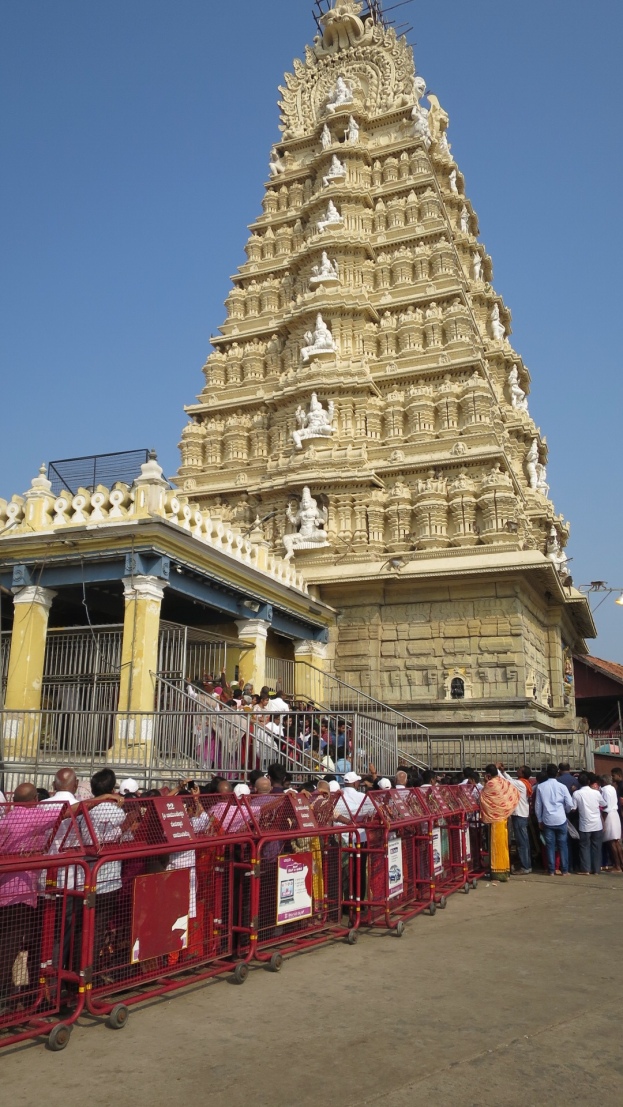 Today is Republic Day (representing India’s freedom from British rule) and a national holiday. There were dozens upon dozens of busloads of tourists and the queues to enter the temple were terrifying. We stayed outside and watched as the crowds arrived; many passed holy men for blessings and bindis. 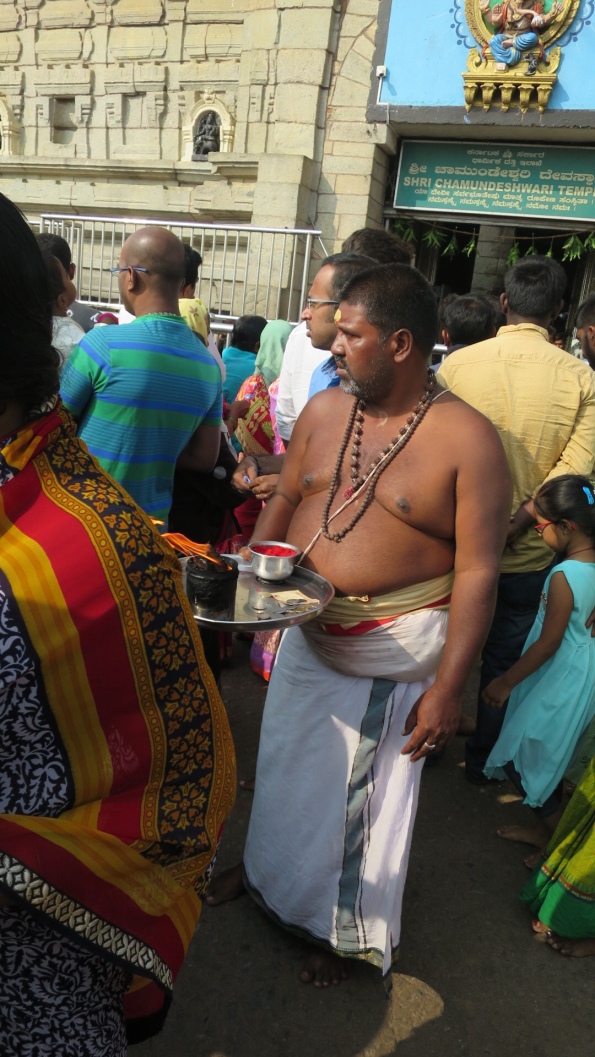 We were quickly surrounded by a very friendly Indian family who wanted our photos. The funny thing we have noticed about many of these group photos is that once the selfie-stick or camera is in place, everyone assumes a very serious demeanour, even the little kids.  I felt very much like a smiling white-haired lady towering over everyone. 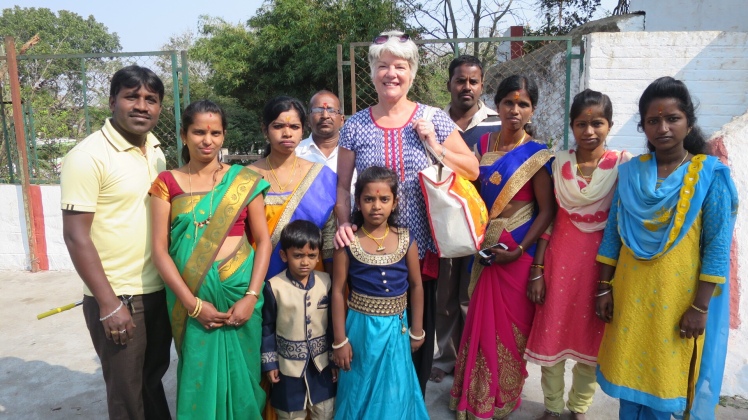 A view of Mysore taken from a lookout on the road up to Chamundi Hill. We have not had a lot of bright blue skies since we’ve been here. There is a haze over the city with smoke coming from hundreds of small fires that are set daily (people burn their garbage). Both Stephen and I have sore throats and cold symptoms. 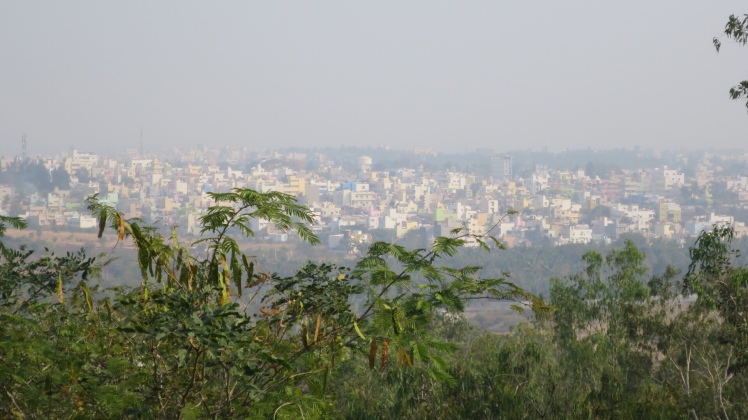 I was not as captivated with Mysore as I thought I would be. It is a smallish city (just under 1 million) with many historic buildings and monuments, but with the exception of the Palace, many of the attractions were in disrepair.

This was a good introduction to an Indian city, as it sharpened our travelling wits a whole lot.  We are not planning to visit any of India’s huge cities, except for Delhi in April. There are so many places to visit that don’t demand such stamina and perhaps offer more reward – tea plantations, bird sanctuaries, backwaters, tiger reserves, elephant reserves, the desert cities with their forts and palaces and the Himalayas.

We fly down to Cochi tomorrow and then we will be firmly in Kerala State for a few weeks.  We’re still very much in the early days of being in India and still being swamped by new impressions and emotions to sort through.

One final note on our hotel: Unlike the horror show in Hampi, our Mysore hotel is a dream. Polite, professional staff on the front desk and in the dining room. Huge spotless room, with tiled floors, comfy bed and modern bathroom. Air-conditioning and wifi  – both of them in good working order.  Big breakfast included. And…we paid almost the same as we did in Hampi – just under $50 a night. We have made a decision not to skimp on our hotels in India – the $25 room beckons and is often just fine, but we really want to have a sanctuary to come back to after our sightseeing each day. We’re staying at Casa Mia Homestay in Cochi  – we’ll see you again in a few days.

16 thoughts on “Mysore: City of Palaces”