This is the reason that tourists find their way to Amritsar, in Punjab State: the spectacular Golden Temple that is India’s holiest Sikh shrine and a sacred pilgrimage for millions.

The Golden Temple is the centrepiece, but it is set within a huge compound and surrounded by the Amrit Samovar, or Pool of Nectar – a massive tank of water kept clean by a school of koi. Refreshingly, there is not a speck of garbage around – not so much as  a gum wrapper is floating in the holy water, which is said to have healing properties. Pilgrims (men and children only) come from all over the world to bathe in the waters and wash away their mortal sins and bodily ills.

The Golden Temple is free of charge and open to everyone, regardless of religion. To enter, you must first remove your shoes and walk through a foot bath ( kept clean by piped-in flowing water.)

Dress is modest and heads must be covered.  With that protocol observed, the Temple takes on a home-away-from-home atmosphere for devotees; many of whom will spend the entire day there. It was not uncommon to see people simply flaked out in the middle of the pathways. 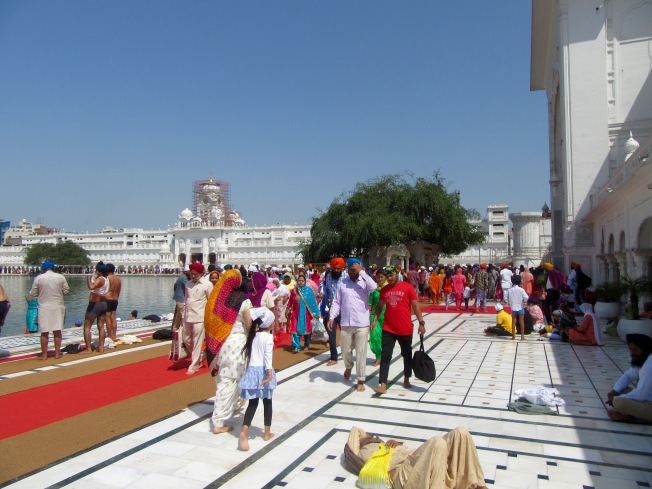 Some devotees appeared overcome by emotion; many dropping to kiss the marble floors and others engaging in quiet prayer.

One of the extraordinary features of the Golden Temple is the Guru-Ka-Langar – a gigantic dining hall where free meals are served to over 100,000 people every day. The Sikh principles of equality are at play here – everyone sits on the floor and eats together, regardless of caste, religion, colour or economic status. We were still nursing tender tummies and did not want to appear rude by not eating, so we didn’t partake, but we did gratefully accept bowls of filtered water being offered at stations throughout the compound.

Stephen, with souvenir scarf,  in front of the Golden Temple. We were among the very few white faces in the crowds and attracted a fair bit of attention, especially from the children, who gazed at us with such curiosity. 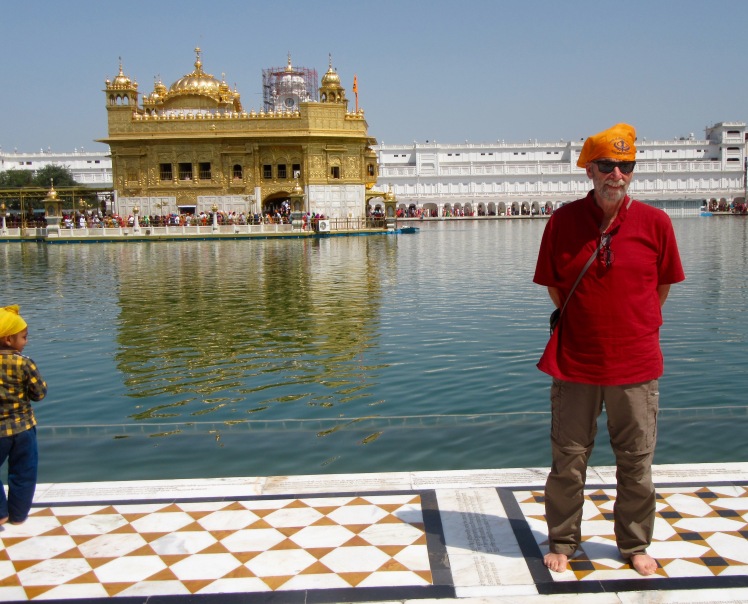 One does not have to be Sikh to feel deeply moved here – by the respect, the devotion and the awe that we witnessed from almost everyone around us. We could imagine how profound an experience it was for them, as it was for us.

The temple is made of white marble and encased in 750 kg. of gold leaf and is accessible by walking down a long causeway. But first, you must line up and with an estimated waiting time of up to two hours, we were just not up to the challenge.

We did hang around for a bit at an opening in the lineup and talked to a man and his son. He became quite animated once he found out we were from Vancouver – he is an NRI (non-resident Indian) living in Langley and back to India for a visit.

It was fun to watch the method of crowd control – once the lineup made it to the straightaway, there were large bamboo poles in place to measure out the next chunk of people allowed to move forward.  By now, they had been waiting for an hour and a half, so they were chomping at the bit.

They lift the pole, and they’re off…dashing ahead in a mad, albeit good-natured, pack. The pole comes down again and the next group will be let though in about 10 minutes time. The video didn’t pick it up, but about another dozen or so people shimmied under the poles and squished in, pushing ahead in the lineup. It’s the Indian way.

The prize – worth waiting for a chance to visit the inner sanctum.

From the peace and serene beauty of the Golden Temple compound, our re-entry to the outside world was somewhat jarring.

Amritsar is doing its best to Keep India Chaotic – back to the world of beeping, honking, garbage-strewn madness. The side streets and alleyways are enticing, but we’re on a mission – we’re heading to the scene of a 1919 massacre.

During this time, Amritsar was the scene of protests and action for the Independence Movement, and it was at Jallianwala Bagh that 5000 people gathered into a public courtyard for a peaceful protest. The British army moved in and without warning, opened fire on the unarmed crowd. With just a narrow laneway as the only exit, most were trapped. When it was finished, over 1000 were killed and more than 1500 wounded.
It was a vicious and unprovoked attack that was widely denounced around the world.

Today, the courtyard is a beautiful space, filled with gardens, a memorial, a small museum and signs pointing out the bullet holes that are still visible in the brick walls.

We also visited the excellent Partition Museum. This relatively new museum explains the tumultuous events leading up to India and Pakistan becoming self-governing countries, and the catastrophic fallout. 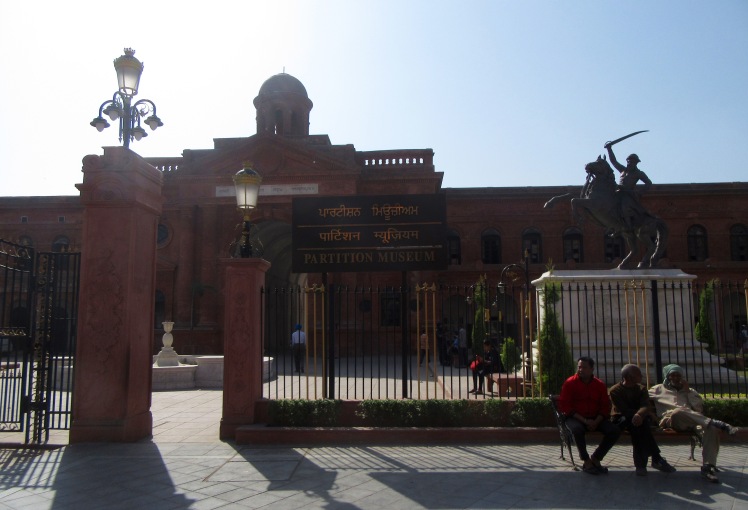 The partition of 1947 coincided with the dissolution of the British Raj era, and the independence of India. The history and key figures of Partition are far too complicated to explain in a blog posting, but in a nutshell, this is what happened:
The state of Punjab was divided into East and West, and overnight millions of citizens found themselves on the wrong side of the borders and were forced to flee. A mass migration of 1.4 million people created a refugee crisis of epic proportions, and more than 800,000 people of all religions were killed in the riots that followed. The killings and hatred continued, creating religious-based conflicts that are not entirely over to this day.

It is a part of history I had only heard fleetingly about and knew very few details.  One haunting display in the museum was a recreation of a well – to illustrate how women would fling themselves to their deaths in the wells, rather than be captured, raped and killed. Yet another potent example of how we never seem to learn.

The interior courtyard of Town Hall – part of the stunning complex that houses the Museum. 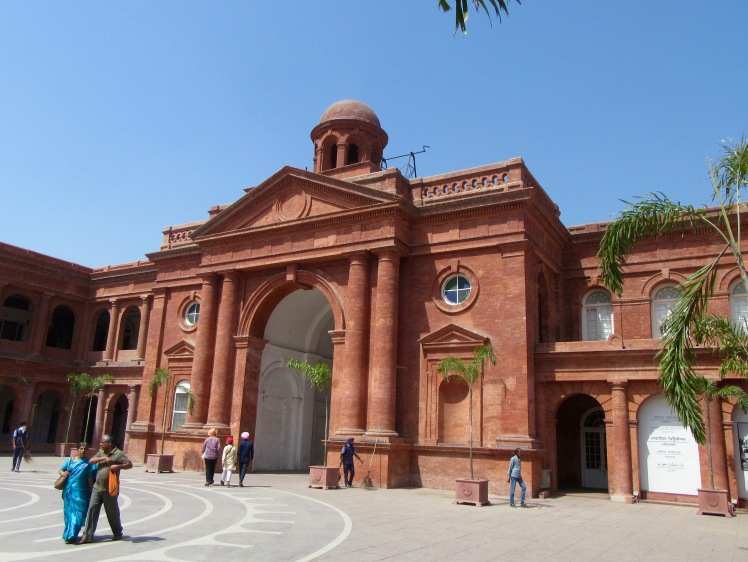 Our visit to the Partition Museum was a perfect set-up for our visit to the border-closing ceremony between India and Pakistan (we’re just 30 km. from the border), but more on that in a moment.

First, a couple of signs that caught our eye.

This doctor’s office was just down the street from our hotel, and this sign stopped me in my tracks.  India leads the world in TB cases, with an estimated 2.2 million out of a global rate of 9.6 million.  (Canada had just 1600 cases). (WHO 2011)

We passed this sign on the walls of a military installation – long, clean walls with this sign every 200 yards or so.

It’s not a friendly sign, and we won’t be the ones to put it to the test. As in Jaisalmer, Amritsar is close to the Pakistan border,  and relations between the two countries are still uneasy. The hundreds of troops and tanks and armoured vehicles are not there for show.

The famous border-crossing ceremony at the Attari-Wagah border, on the other hand, is pure show.  Part Monty Python Silly Walks, part military showmanship, this 30-minute spectacle draws 20,000 – 25,000 people every afternoon.

The suspense begins as we make our way from the parking lot to the border. Cycle rickshaws are on hand for those who don’t want to walk the final kilometre.

We are instructed to bring our passports, just in case. (they were checked), and we all pass through a security scanner and a vigorous patdown. No bags allowed – just a small purse and camera.

Then, once past the military and the police dogs, the games begin. Vendors hawk flags, fans  and hats with “I Love My India”. We brush past them to race for the stadium – trying to get the best seats, preferably in the shade. Several military are on hand to direct traffic and in our case, to encourage me to stay put, after I had been told (with several blasts on the whistle) to sit down. Down we sat, and watched the hordes flow in and fill up the seats.

The whole point of this ceremony is to take down the flags on either side and close the gates for the evening, but what started out as a semi-formal, military drill has turned into a theatre of the absurd.

On the Pakistan side, the crowd was being warmed up with a somewhat sedate performance.

On the India side, it was raucous. Jai-Ho (the famous song from Slumdog Millionaire) brought the crowds down for an impromptu Bollywood performance.
Vendors worked the stands, selling ice-cream, popcorn, and drinks. The crowds kept streaming in.

And then…with military precision – the dancers were scooted back to their seats, the vendors shooed away and at 5:00 pm on the nose – showtime.

It began with officers running smartly with their dogs, and the crowd went wild. 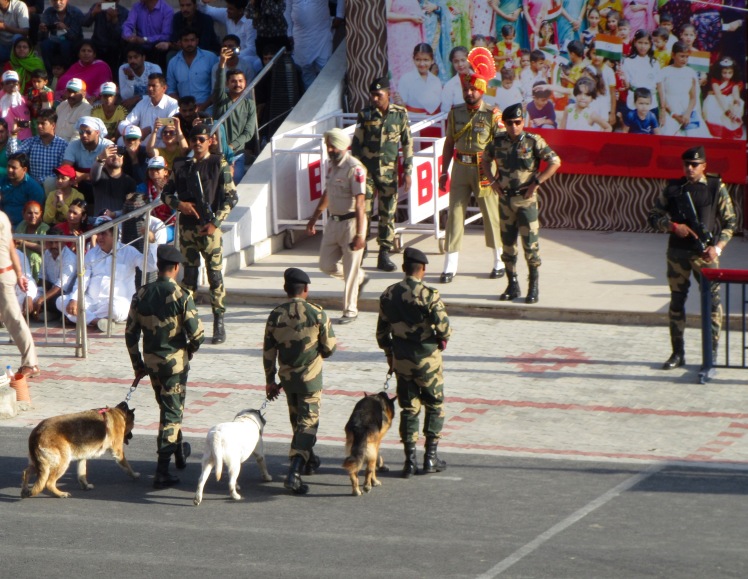 Actually, the crowd went wild for the entire 30 minutes, and amazingly…they were otherwise very well-behaved. At the first sign of trying to stand up (and block everyone else’s view while they got their photos), they were sternly told to sit down, and didn’t need to be told twice. Subsequently, everyone got to see and everyone got their money shots.

A lot of to-ing and fro-ing and perfectly choreographed arm-swinging and leg-lifting.

And then, the chest-thumping, teeth-baring finale. Flags were lowered, carefully folded and carried away.
Soldiers on both sides carried out a provocative show of force – first from India:

Followed by a call and response from Pakistan: 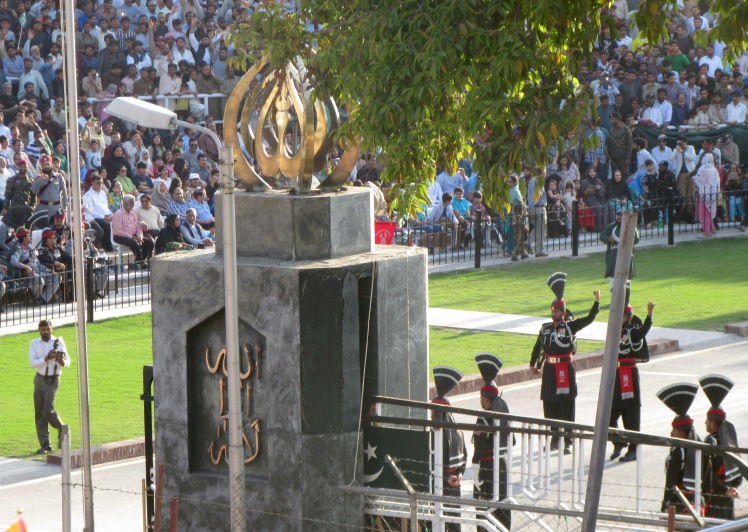 And the India-Pakistan border was peacefully closed for another night.

Now we’re in Chandigarh, which could not be more different from Amritsar.  It is still in Punjab state, and is  India’s first planned city – by Le Corbusier, no less.

18 thoughts on “Amritsar: not all that glitters…”