For the past 90 days, we have sweltered and sweated our way through India; our faces dripping and our clothes sticky.  Three days ago, after five hours of bus travel, we climbed 2200 metres into the foothills of the Himalayas and left the heat and humidity behind.

Our last week in India will be spent in India’s oldest hill station – the former summer playground of the British upper crust and the current favourite of newlyweds and Indian families fleeing the spring and summer heat. Today in Delhi it was 38 degrees; in Shimla, it was 23 degrees with a light breeze. Once night falls, we  will need coats and hoodies. We’ve been sleeping under two heavy blankets and no air conditioning – heaven.

Shimla, with the snowy peaks of the Himalayas on the horizon.

We have been putting our legs and lungs to the test – the town is built on seven steep hills, and the inclines can be brutal. Some of the smaller staircases are a little heartstopping – a fall down these stairs and you would be airborne.

We’ve been able to soften our ascents and descents by sticking to the broader roads, most of them pedestrian-only. The main part of Shimla’s centre core is defined by The Ridge, a large open area ringed with small greenspaces, monuments to Gandhi and Indira Gandhi, and vistas of the town and mountains. This is where everyone gathers- Ground Zero for  the millions of selfies that threaten to drive me mad. I’m trying to sidestep fogey attitudes, but  for some reason, selfie-nation gets under my skin in a big way. There is no background too innocuous for a selfie; no opportunity wasted for yet another shot of me, glorious me.

Don’t hate me cause I’m beautiful. (at some point I may look around and appreciate the scenery, or…maybe not.)

Selfies aside, without cars and motorbikes and tuk-tuks dominating the landscape, the people-watching becomes far more interesting.

Stephen has been collecting photos of mannequins – this started last year in SE Asia, where the mannequins were bizarre and downright scary. He’s found a few in India and noticed this one – her hair cut with pinking shears by a stoned best friend who also gave her really bad advice on eyeglasses. The gorgeous girls in front of the mannequin wanted us to take a photo of them as well.

We stopped in a square for a break from our mountaineering, and almost immediately these two little brothers began tearing around in front of us – trying to get our attention and showing off outrageously.  Of course, we were encouraging them until their mother scolded them to behave properly, and on her instruction, they came over to practice their English.  “Are you from America?” “Do you like India?” “Thank-you for speaking to us.”
There are a number of very good schools in Shimla, and these two boys are attending one of them – learning their subjects in English.

Shimla is different from much of India in a number of ways. Due to the steep terrain, traffic is confined to lower roads,  which means much of the city core is like a walk in the park –  peaceful and stress-free. There are very few beggars here, so hopefully that means there is a little more money to go around for more people. There is very little garbage on the streets. There are do-not-litter signs up everywhere, and plenty of garbage cans. Shimla has declared itself a smoke-free city and smoking inside and outside is punishable by fine. We did not see a single smoker – amazing. And – hallelujah – spitting is another civic misdemeanour.  We did see a few spitters, but it’s a hard habit to break.

I marvelled at this store. Does this mean anyone could kit themselves out in full uniform and pass themselves off as police officers? Think of the revenue possibilities.

Due to the incredibly steep inclines on many of the streets, moving goods is done by sheer brute human force. You can imagine what four cases of pop weighs, held in place by heavy nylon straps. We saw many such amazing feats of strength – including incredibly, a full-sized refrigerator. 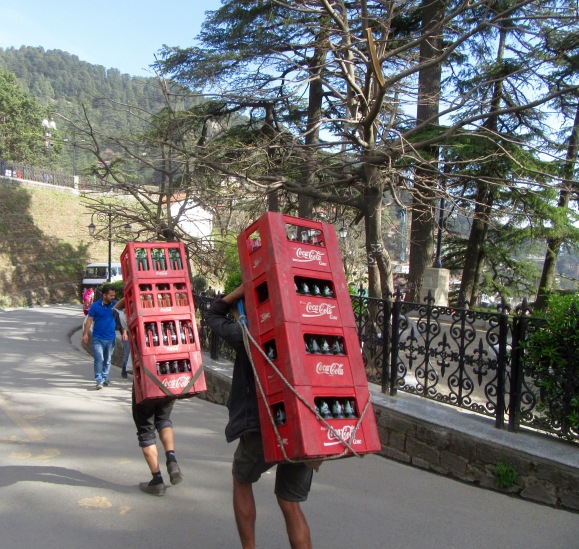 The main shopping street, called The Mall, weaves around the Ridge on either side and runs for seven km. This is where tourists and locals congregate, and where some of the town’s main attractions and interesting architecture are found.

One very curious business enterprise in Shimla are bathroom scales. Vendors set up blankets on the ground with the scales in front (and mysteriously, there are often horseshoes set up alongside – perhaps a token of good luck for the weigh-ee?) The cost is 10 rupees – about 20 cents. I passed by a number of decrepit scales until I came to this lady, with her bright shiny digital scale, unadorned with horseshoes – just the scale.  I liked her style, plus she charged double her competitor’s prices – 20 rupees, so with the logic of “you get what you pay for”, I removed my shoes, and hopped on. Aha! I’ve lost at least 10 pounds  – worth every rupee.

Thus encouraged, we continued on to our destination – The Oberoi Cecil Hotel.

Built 130 years ago on the site of Tendril Cottage, where Rudyard Kipling lived and wrote his novels, The Oberoi Cecil played a large role in the social life of the British Raj era and was the scene of many balls and galas. As Kipling noted, Shimla at the height of British rule had a reputation for ” frivolity, gossip and intrigue.” The Cecil no doubt added to that reputation.

It was completely refurbished in 1997, in the  original understated old money style and while we could not afford $400 a night to stay there, we decided to stop for lunch in the atrium, just to absorb the atmosphere.

Our delightful waiter would have noticed our less-than-polished appearance and our consternation over the menu prices. When we decided to forego lunch and share the least expensive item on the menu, he nodded as approvingly as though we had just chosen the Himalayan trout, paired with a crisp white wine.

Our coffee, served with tea cakes and complimentary biscuits. Coffee was excellent, cakes were a touch dry.  Our bill was just over $30. (Lunch would have been just under $100). Nonetheless, a wonderful experience.

The main dining room of the Oberoi Cecil. Can you not imagine the glasses of sherry and the poached fish and the dinner conversations? 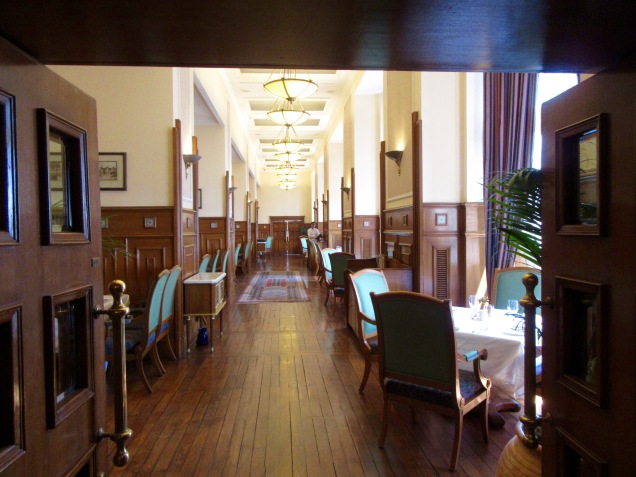 Shimla still has many buildings from its heyday as the summer capital. From 1864 to 1939, the entire government of India would flee the heat of Calcutta and transport all the files and documents of government to Shimla. It became not just the centre of government, but also the stage for the social life of the British elite.  Picnics, balls, galas, hunting, and amateur theatre at the Gaiety Theatre became the focus of each Season.

The Gaiety Theatre has been beautifully restored, and on-site historian Mr. Gautam gave us a very animated and interesting tour of the theatre and explanation of its history. He modestly shook his head when I ask him if he was also an actor, and acknowledged that I was not the first to come to that conclusion.

The theatre was a huge diversion, and each summer plays by Shakespeare and George Bernard Shaw would be staged by amateur  British actors to a British-only audience. No Indians allowed – neither on stage nor in the audience.

View from the stage.

Restoration projects are happening all over Shimla – so many grand mansions that have sadly been left to ruin.  This one – Bantony Castle – is almost impossible to imagine that it can be reclaimed. It has deteriorated to the point where the roof has collapsed in spots, so interior damage must be severe. However, restoration is in the works – it would be so interesting to see when the work is completed. 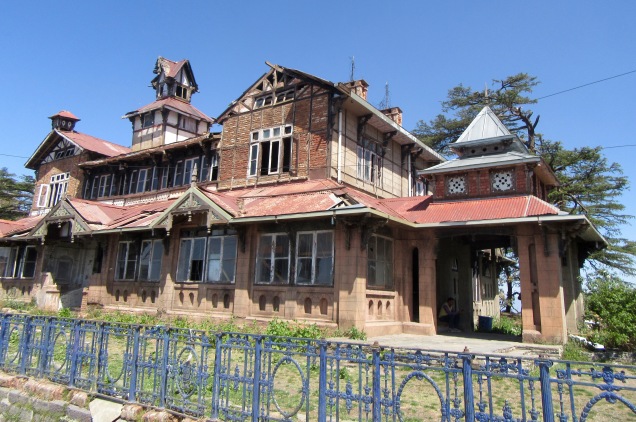 The simple, elegant Christ Church Cathedral is another landmark from the British era. Built in 1846, it is one of the oldest churches in northern India.  We walked around the side to the manse, where they were serving Good Friday hot cross buns and coffee.

Shopping in Shimla is a curious mix of Western knock-offs (Puma, Adidas), carved wooden toys and keychains and embroidered clothing and wool shawls. We bought a large shawl made of yak wool from Tibet, (which we will likely use as a lap blanket) – our only purchase so far, other than light clothing. There were many beautiful things along the way, but we didn’t want to have to carry stuff along with us as we travelled, so we’ve bought nothing. We may end up spending our remaining rupees at the Delhi airport.

Fancy gold jewellery is a huge thing in India – for weddings and for everyday use. While this jewellery is far too ornate for me, it is perfectly suited to Indian women, with their beautiful saris, their white teeth and red lipstick and their dark colouring.

There are a number of very good jewellery stores in Shimla – here is an example of some typical Indian gold jewellery.

This has nothing to do with shopping, but is an interesting fact of life in Shimla.  Since vehicles are limited to the lower roads, traffic is horrendous and parking is at a premium. Most of the roads have limited shoulders and/or are on very steep inclines. Many hotels have just a handful of parking spaces for their guests and this is what they look like. Can you imagine the nerves required to park cars on this rooftop?

We’re in Shimla for another four days and have lots more to tell you about.  I’ll be sending out another posting before we leave.