The first time we heard these catchy lyrics was at the Legion in Fort St. John. Chicken dinner, $4 beer, 50/50 tickets and a meat draw. All this and karaoke, and in this neck of the woods music is solidly in the country camp.  People are Crazy by Billy Currington was the highlight of the night – sung with raspy emotion by a rangy, plaid-clad gentleman. It pretty much sums up the way of the road up here – God-fearing, beer-drinking characters who thrive in this slightly wild northern town.

We’re on Week One of our camping trip in northern B.C. and Alberta, with our first stop in Fort St. John to visit our son Dan, who has been living and working here for the past seven years. Here we are, happily re-united. 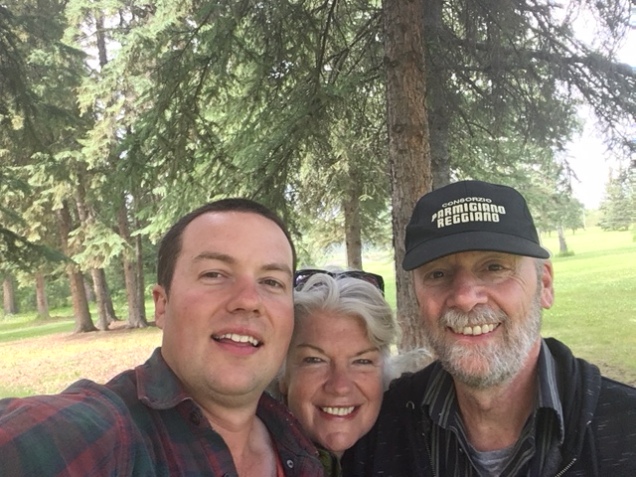 Before I tell you more about Fort St. John, I want to share a few photos of our drive up from Horseshoe Bay, near Vancouver. We camped for three nights along the way, and enjoyed watching how the landscape changed the further north we went.

Our first night we camped in Nairns Falls, just south of Pemberton. We’re in bear country now and the hand-written “Bear in Area” signs are a responsible warning and a reminder to be aware of our surroundings. We hiked along for three kilometres on a beautiful groomed path high above the river without seeing anything bigger than a dog on a leash.

I promise I will keep selfie shots to a minimum, especially since we don’t seem to have the knack of shooting without reflection . 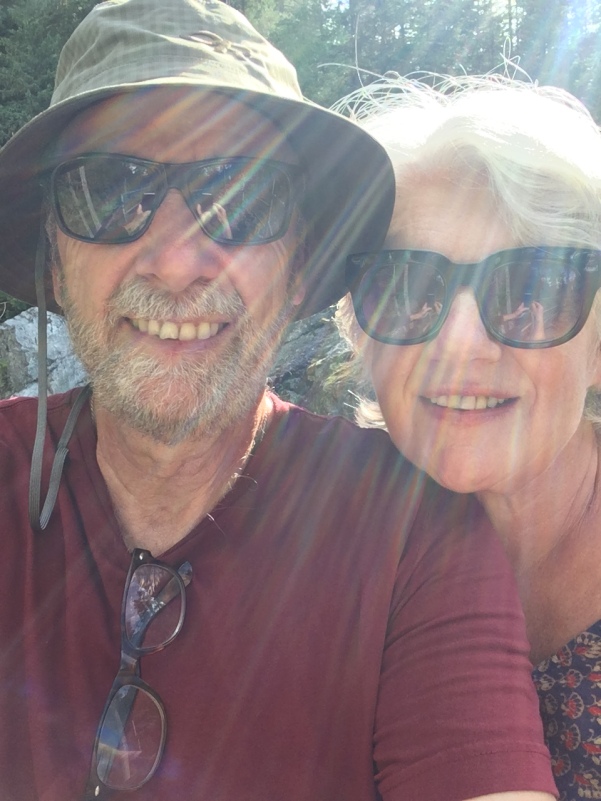 The next day we drove through the magnificent Duffey Lakes Road, a twisty, scenic route much beloved by motorcyclists. It requires full attention to navigate the hairpin turns, and after a couple of hours, we welcomed the chance to stop by this lake for a breather. 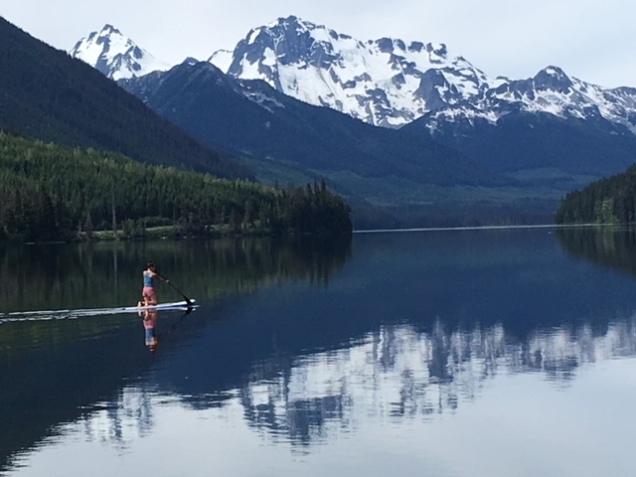 Another viewpoint as we headed north. 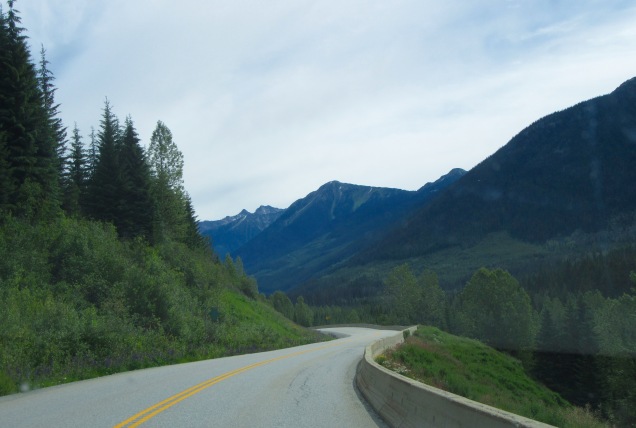 This year, everything is green and lush – the season so far has been cool-ish and punctuated with plenty of rainy days. This time last year, wildfires were wreaking havoc in much of B.C. and the damage is still evident. 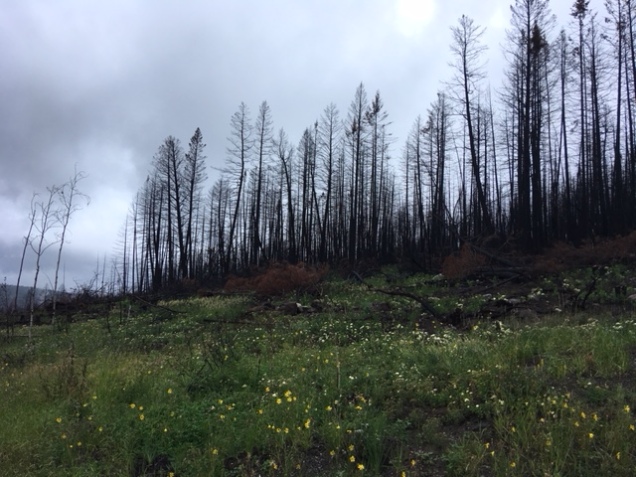 Finally, about an hour outside of Fort St. John, we are in the heart of the Peace River Valley. 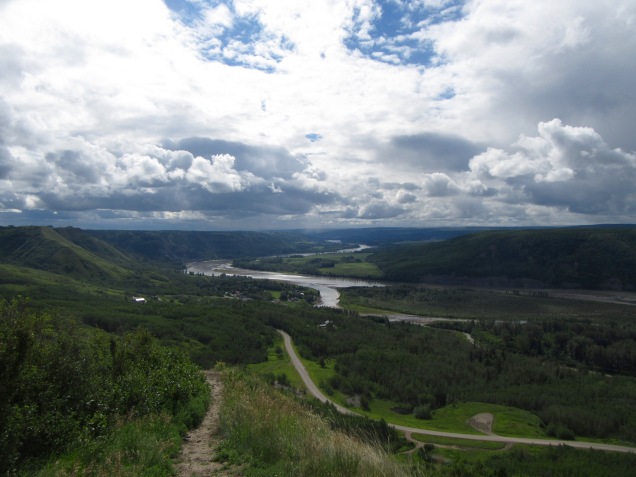 The setting around Fort St. John is stunning – the Peace River cuts through thick forest, high hills and fields of canola against a backdrop of the ever-changing big northern sky. 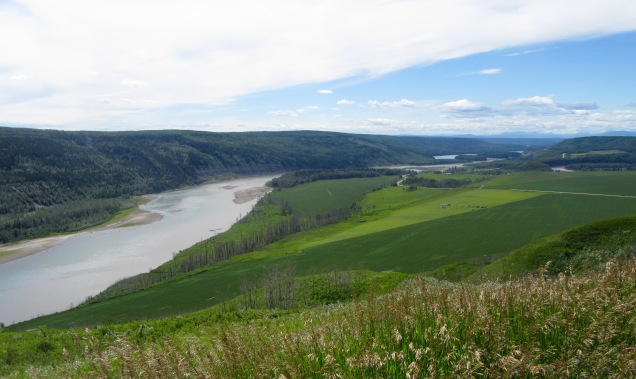 Just a short drive out of town and the vistas open up. The light is different, the air is cleaner, the sky is bigger – there is a defining look.

This could just as easily be northern Minnesota or Manitoba. A northern lake, built a little more for fishing than swimming. 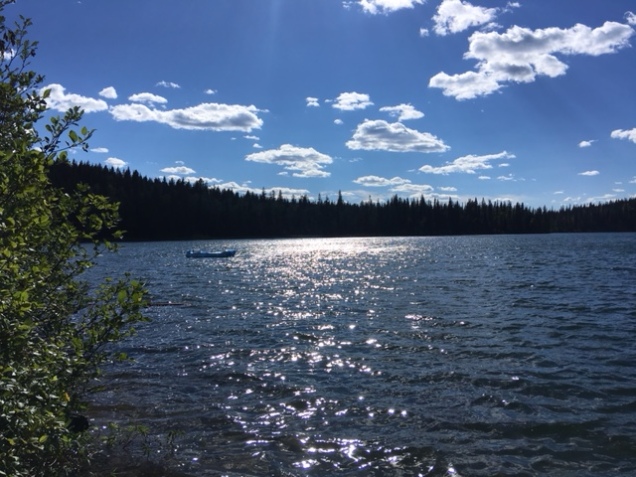 Fields of canola – one of our favourite Fort St. John scenes. 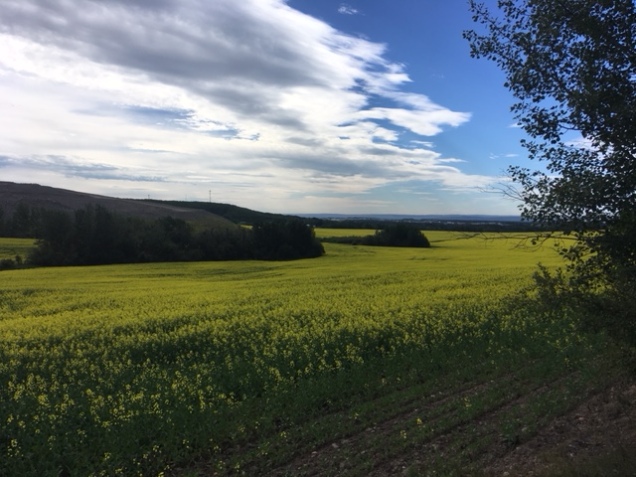 Fort St. John is not as pretty – a utilitarian northern working town set on a grid (100th St. bisects 100th Ave.), with basic shopping and streets of modest homes whose driveways are filled with big boy toys. This is a typical neighbourhood in oil and gas country. 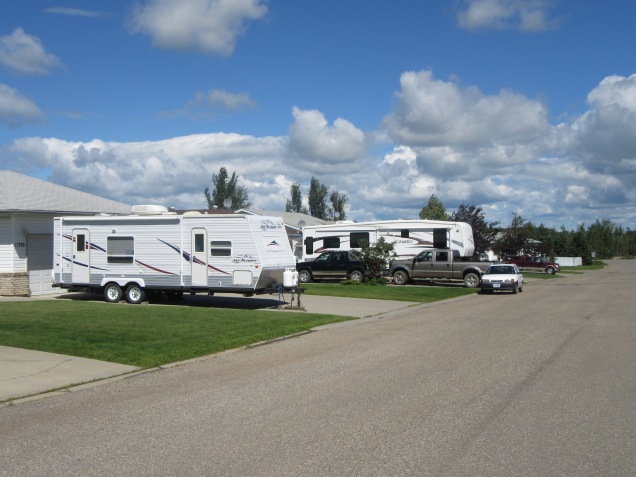 What Fort St. John lacks in style, it makes up for in heart. Billed as “The Energetic City“, this is a very young town, populated with young families. Huge modern recreational facilities – hockey arena, curling rink, swimming pool and library provide residents with a reason to stay beyond the oil patch paycheques.

Those paycheques attract a somewhat transient crowd, but the city is also well-defined by those born and bred here. Trendy coffee shops, artisan pizza and vintage clothing stores are finding a healthy market among the Mark’s Work Wearhouse and Quiznos customers.

And now, on to the elephant in the room, the highly controversial Site C dam project. When we first began driving up here seven years ago to visit Dan, the project was on hold, and “NO SITE C” signs were everywhere. It seemed inconceivable that a great swath of the Peace River Valley would be flooded out, after the expropriation of generations-old farmlands in some of the richest agricultural land in the province.

In 2017, construction began, and in spite of huge protests and much governmental to-ing and fro-ing, the project is indeed a go. It is due to be completed in 2024, for untold billions of dollars and untold environmental damage.

While much of the site is strictly off-limits, there is a viewpoint for the public to watch the progress.  This is part of what it looks like after a year. The dam will be built roughly in this spot, with the reservoir behind it. 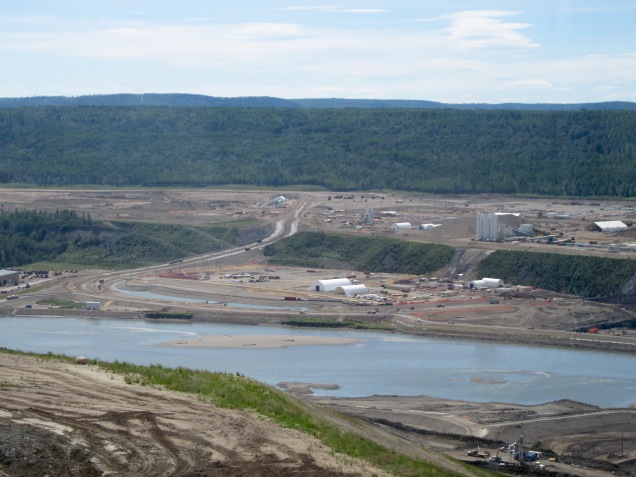 While ultimately the dam will generate the least amount of greenhouse gas emissions than any other form of energy (with coal being the worst and solar being the second best), the controversy lies with the construction.

Our son Dan works on the Site C project.  He pointed out the dozens and dozens of diesel-emitting trucks that are on the site, and what their cumulative effect on the environment might be by the time this project is completed. The expropriation of prime farmland is another factor that is impossible to gloss over.

In the north, where oil and gas extraction (and its attendant environmental concerns) are a mainstay of the economy, attitudes are different than they are in the south. People here are not cavalier or uneducated; they are pragmatic. That same attitude prevails for Site C and the final economic, environmental and personal outcome will take years to be realized.

Back to our visit with Dan. We live so far from each other and only have a chance to visit two or three times a year, so we pack a lot in.  We are in a beautiful campground just outside of town, and we’ve spent a lot of time here in the evenings, going for hikes, tossing a frisbee, and sitting around a campfire.  Amazingly, the bugs have not been too bad – we’re hoping that is a trend.

On a hike near Dan’s home. 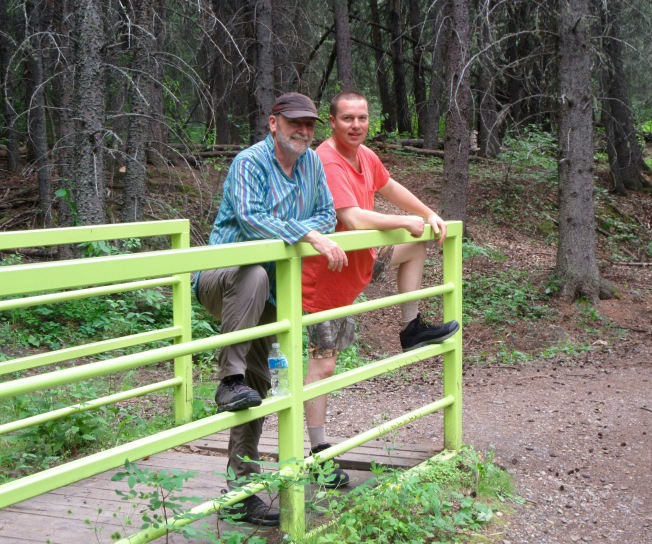 And… a little mishap. Being on the road is no different than being at home, as far as mishaps go. You can break a tooth ( I did that several years ago in Halifax), or you can break a car window.  We had our truck parked outside Dan’s place, and as we were leaving to go out, the old gent who mows the lawn for Dan’s landlady was in the backyard, and wondered if we were the owners of the red truck. Well, yes, we were. He thought perhaps his mower had caught a rock and flung it up on our truck. He had noticed “a bit of glass”. 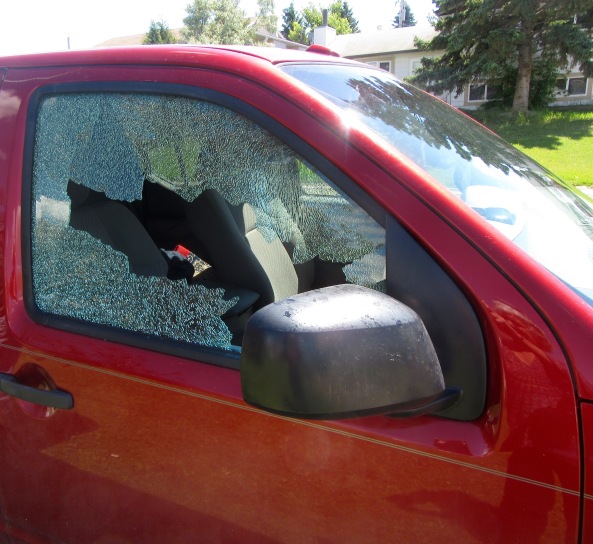 Shock and disbelief turned to action (where to find a glass place on Saturday at 4:00 pm?), turned to our new reality. The land of Dodge Rams and F350s does not carry glass for our dainty Nissan, so our new window is being shipped from Edmonton and our departure has been delayed by two days. The bill for a new window is less than our deductible, but not more than we can afford, and so it goes. What to do but be philosophical about it?

Our next stop is Fort Nelson for one night and Liard Hot Springs for three nights. So far the only wildlife we have seen is a fox, and we are hoping that route further north will live up to its reputation as being the Serengeti of the North.

Wifi in campgrounds will be non-existent, and possibly spotty elsewhere, so we hope to see you all again in about a week.