Fernie is a town we have wanted to visit for many years, but it was never on our flight path. Now we’ve finally made it and curiously, Fernie is a lot as we had imagined – a mountain town without pretension.

We are staying right in the heart of Fernie Alpine Resort, about 4 km. from town. We are a stone’s throw from the summer ski lifts.

While the scenery is gorgeous, it is marred somewhat by the smoky haze that has travelled south from the many forest fires currently blazing in B.C.  Apparently “smoke” is frequently part of the summer scene here and the locals take it in stride. We’re trying to imagine how breathtaking this must be in February, with metres of snow and bright blues skies.

Our hotel, Fernie Slopeside Lodge, could use a coat of paint, but you can’t beat the location. The rooms are basic, but clean and well-equipped with coffee maker, fridge and microwave – they even offer surprisingly high-end toiletries. Try finding a hotel room of any description for $65 at the height of the summer in Jasper or Banff.

We’re partial to mountain towns – they tend to have a lovely uncomplicated energy; filled with residents who are fit, active and healthy.  We lived in Banff for two years and have visited Lake Louise, Kananaskis, Revelstoke, Whistler, Pemberton and Nelson and the common denominator is the same – outdoor life rules.

In Fernie in the summer, the bicycle is king. There are dozens of mountain biking trails that range from shady paths in town to extreme alpine slopes designed for full gear and steely nerves. ( We didn’t catch the latter, so we’re showing you the former – more my speed.) 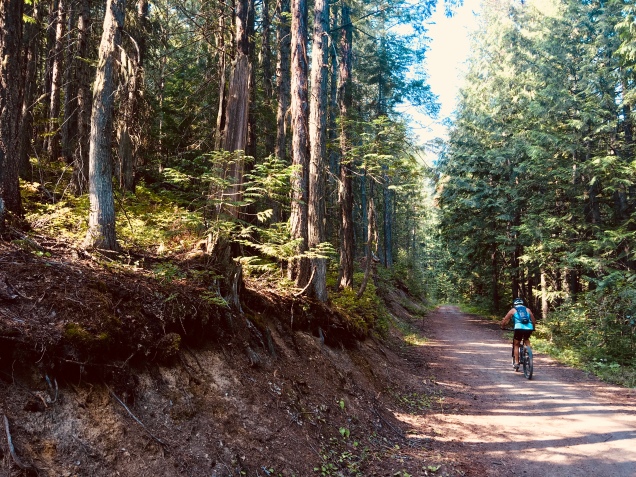 In town, car drivers are far more courteous than we’ve seen elsewhere. If you even hesitate near an intersection, cars come to a stop and wave you through. There are a few free bike wash stands throughout the town; a thoughtful gesture that speaks to a municipality that understands the needs of its people. 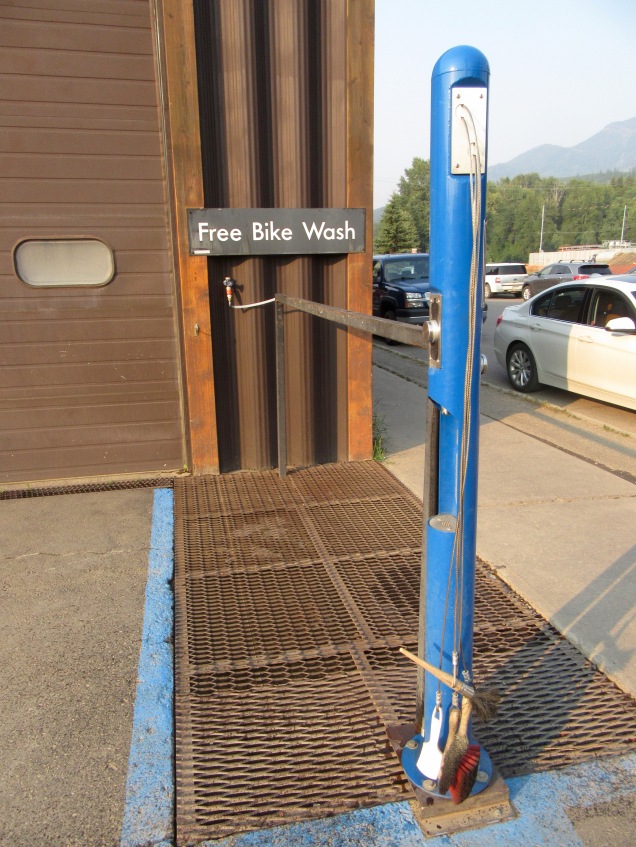 Another homage to bike life.

And since we are on the subject of street art, after Stephen watched two little girls having their photos taken, posing in the “wings”, he could not resist following suit. 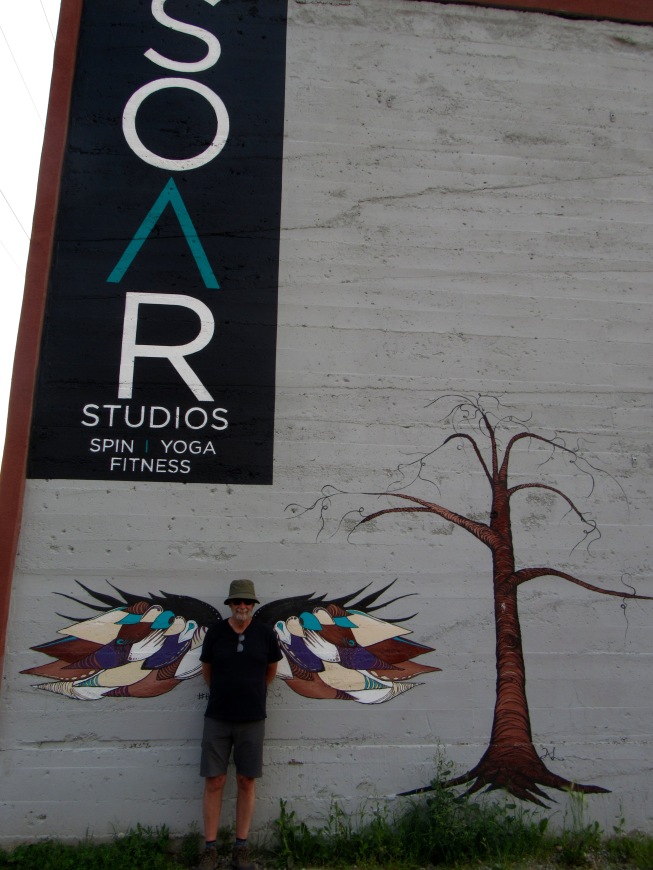 This upscale yoga studio is typical of Fernie – fortunes from its original coal mining days have most definitely shifted.

The  main street is filled with trendy stores and restaurants, and more than a few bike and outdoor gear shops. Fernie is not turning into another Whistler by any means, but it is expanding its target market as the word gets out.

And yet, it seems to be a town that hasn’t forgotten its residents.  In the summer, every Wednesday night offers free music and we were keen to join in. The band was forgettable, but it was fun to be part of the crowd. There were tourists to be sure, but we watched the locals mingling back and forth – their town still belongs to them.  We drank excellent local beer from Fernie Brewing  and a number of food trucks were on hand. We chose from this truck – fantastic Vietnamese food.

This little boy was having such a good time, he forgot where his parents were and went over to help himself to another gentleman’s drink. 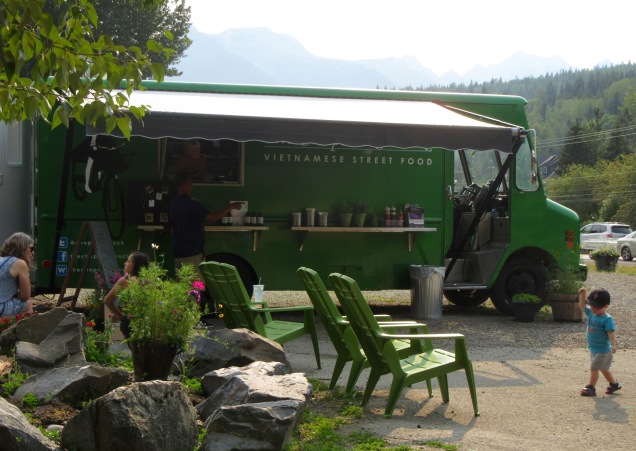 The days have been quite steamy – in the low 30s, so we were grateful to cool off at the Fernie Aquatic Centre.  We’ve driven by the golf course and watched people fly fishing and launching inflatables in the Elk River. It would take time to run out of things to do here.

Fernie has a rich history, which is evident in the architecture – almost all of it built after a disastrous fire in 1904.  The town developed in the late 1800’s after the discovery of a coal vein to the east of the town. After a number of tumultuous boom-and-bust periods, mining activity moved from underground to five open-pit mines about 25 km. away, and remains an essential part of the economy. In just three days here, we were stopped twice at railway tracks while 100-car coal trains chugged by to the coast.

We took a self-guided tour of Fernie’s historic downtown, beginning with the current City Hall, formerly the Crow’s Nest Pass Coal Co. offices.  The grounds in front of City Hall present Miner’s Walk – a pictorial guide of Fernie’s coal mining history from past to present.

The Court House is considered one of B.C’s finest buildings.

The old Imperial Bank, circa 1909, and now home to a restaurant.

These are just a few of the notable well-restored downtown buildings. The residential side streets house a number of styles, from miner’s cottages to Victorian Gothic.

There are dozens of hiking trails to choose from and while some are multi-day, requiring advanced skills and guides, most are easy day hikes, ranging from 1-hour loop trails to 3-hour hikes with slight grades. Before setting off on our first hike, we read the hand-written sign that warned of ongoing sightings of a grizzly bear and her cubs and a black bear and her cubs. We spoke to a couple of hikers who had seen a cougar under a chair lift.

We knew we were in wildlife country and need to take appropriate precautions, so we clapped, whistled and sang as we traipsed along. We were thrilled when we stopped for a drink of water and turned around to see this, emerging from the woods just behind us:

We were standing on the side of this boardwalk and watched this cow as she stared at us, found us unworthy and began picking her way through the marsh. My heart was pounding. And then, her calf joined her and we felt like the luckiest people – experiencing that contact with wildlife that you can easily miss by the blink of an eye.

There were enough people on the trail that a bear encounter did not seem likely, but we did see relatively fresh scat and as we continued along through abundant berry patches, we kept our eyes peeled.

Over two days, we set out on three hikes. A sampling of the scenery: 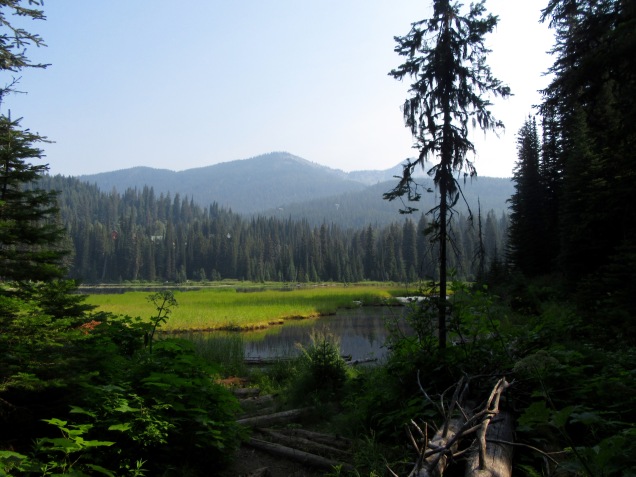 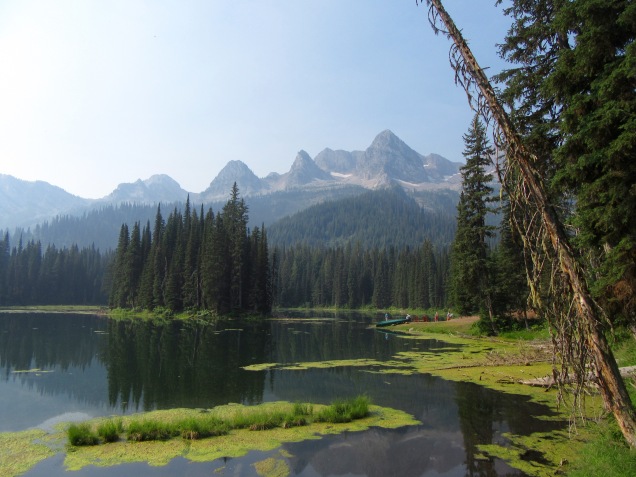 We drove to Island Lake Lodge, just off the highway before Fernie and set out on a hike around the lake. The lake looked quite murky but there is a raft there, presumably to encourage people to swim. 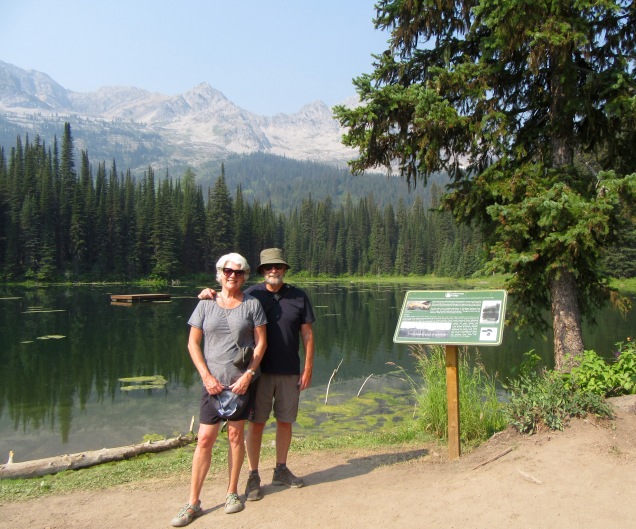 Island Lake Lodge – accessible only by a winding 8-km. gravel road from the highway. When you finally arrive, the setting is gorgeous, and the three imposing cedar-timbered structures are pure B.C.  rustic/luxurious.  The many trails leading from the lodge are open to both guests and the public.

We’ve wanted to come to Fernie for years and are happy to have finally made it. Right now, it hits a perfect balance between being itself and being a tourist destination. Our hope for Fernie is that it will not succumb to tourist pressures and change the face of the town forever.

We’re on our way to Christina Lake – see you again in a few days.