The Oregon Coast is one of our favourite drives, and even though we knew late October weather would likely be drizzly and foggy, we opted to turn left off the freeway and follow along the ocean. It rained, it misted, it was grey and monochromatic; we drove down through patches of thick fog and swooped back up into clear skies. We took two days to drive down through Oregon and every corner brought its own different kind of beauty.

Our first night we stayed around Lincoln City and Stephen backed in to our site, in the pouring rain.

The next day, we stopped at a campground in southern Oregon, near Bandon. WE decided to stay for two nights, to give ourselves a chance to relax and enjoy the beach.

We went for a stroll to the ocean, and Stephen could not resist dipping his toes in the Pacific. Yes, it was as cold as it looks.

There is nothing pacific about the ocean along the Oregon coast. It’s a beast. We stopped at a lookout, observing large signs for “ROGUE WAVES”, “DANGER” as we made our way down. Water pushed through this little channel to create a blowhole, but we couldn’t safely get past to watch it – every minute or so we would hear a thunderous roar.

This is one of many stone bridges that carries traffic along the coast – a thing of beauty and an architectural marvel.

Our third day we were blessed with clearing skies and a bit of sun. This is a quintessential Oregon and northern California seascape – giant boulders flung out from shore.

One of the things we have discovered as we travel is that each experience is a stand-alone one and often cannot be repeated. They are meant to be enjoyed at that moment and then stored as a memory.  Ten years ago, as we drove down the Oregon coast, we stopped by a nondescript roadside shack and had one of the best crab sandwiches we had ever eaten. There was a big pot outside boiling up Dungeness crab caught offshore and the sandwiches (about four inches of fresh crab stuffed into a potato bun) were served on red plastic trays with red-and-white checked waxed paper and crinkle fries. That  unassuming food memory ranked right up there as one of the best ever.

This time around, we stopped by the shack with great anticipation. It looked exactly as we remembered.

We ordered just one sandwich, at twice the price and half the crab. It was good, but not memorable – definitely a time and a place. The other thing that caught our eye was this display:

In the time we’ve been away, there have been two horrific mass shootings – the Pittsburgh synagogue, and the Florida yoga studio. Seeing this defiant display made my skin crawl, but there was no point in discussing the 2nd Amendment with the folks at the crab shack about the connection of guns and those tragedies – their position is clear. As so many people keep asking, “What will it take?”

One of our last memories of Oregon was a coffee stop at the small town of Bandon – a pretty seaside town close to our campground. This sculpture caught our eye – made entirely of plastic objects washed ashore from the ocean.  We have seen many volunteers picking up garbage along the roadsides and the beaches – a strong indication of civic pride and concern for the environment. 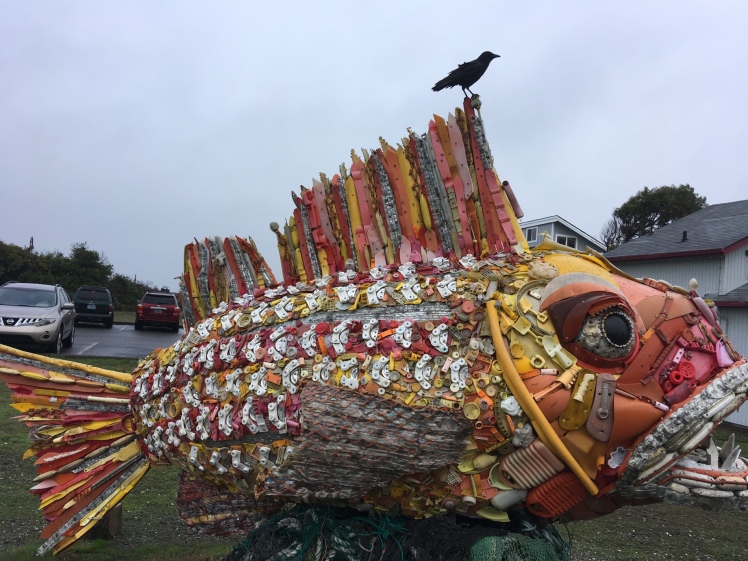 And now – we are camping in the northern end of the California Redwoods – the United States’ only park that is designated as being both National and State. We are camping in Jedediah Smith National Park – right in amongst these staggering giant trees. Luckily for us, the campgrounds are half-full this time of year, and our experience has been incredible.

We had a bit of a rocky start though – we got an “F” on backing up. Back and forth, front and back we went, the trailer going every way but the way we wanted it to, and our frustrating levels rising to an unhealthy level. No kind soul to bail us out, so we just kept trying and trying, and finally, the rear end of the trailer began to ease into our site. Stephen was backing up and I was directing and although we seemed a bit close to a tree, I did not want to discourage our progress – I figured we would straighten out and all would be fine. Oh boy – I got us into an unbelievable jam  – we were far too close to the tree and then we tried to back up a bit to get out and although our trailer was clear, the box at the front was wedged in tight- we couldn’t go forward or backward.  I  honestly thought our only way out was to cut down the tree, but assumed since this was a protected forest, that would be frowned upon.

I ran to fetch a ranger, and by the time we got back with reinforcements, Stephen had figured out a plan. We would unhitch, then reattach at a different angle – exactly the plan the ranger came up with. No trees were harmed.  This is how our trailer is currently situated in our site. As someone wisely noted, “you’ll never do that again.”
We’re getting there – we can learn this.

The California Redwoods defy description and our photos won’t begin to capture them. They would have been entirely logged by now, but for the conservation efforts that begin in 1915 and ramped up again in the 60’s. The result is that many protected first-growth redwood forests are available for the public to enjoy.

Most of these trees are 500 to 600 years old; some are 2,000 years old. They grow up to 350′ tall, and incredibly their root system is only five to six feet deep, so although their roots are heavily interconnected, they can topple in heavy winds. As we walked through a trail, we came upon one of the fallen giants,  a nurse tree that supports a small forest on top of it.

One of the many root ends we walked by:

This tree was showcased with a nice wooden boardwalk around it, but there were no signs to indicate why it was considered special.

These massive fungi grow on a number of trees, and they in turn support more plants.

Within this park, there are very few trails that can be accessed from the campground – you have to drive to them. One of the highlights is the 10-mile narrow gravel road that goes right through the park, with parking spaces and pull-offs along the way.
This will give you an idea of the width of the road – drivers took turns pulling to one side to allow others to pass. 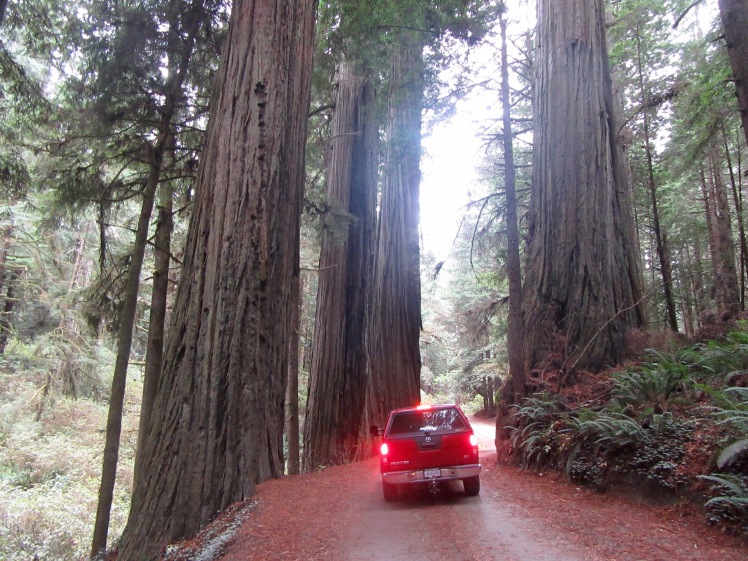 Yesterday we had a very illuminating political conversation with one of the park rangers, a young woman originally from northern Minnesota, with French-Canadian roots. She told us she cried when she voted in the 2016 election as she felt neither candidate was palatable. She is devastated by what the last two years have done to America,”everyone is fighting with each other”.

Prior to 2016, the National and State parks were being gutted, with no new hires and not enough money for proper maintenance and educational programs.  Since 2016, there has been a lot of new ranger jobs, and more resources flowing into the system. While those initiatives may not have come directly from Trump, and she is by no means a fan of his,  she wants that momentum to continue.

An interesting insight to ponder – what do you do when you have no clear choices in front of you?

As for us – our choice is to leave tomorrow and head  two hours down the coast to another section of the Redwoods.

17 thoughts on “Camping with the Giants”