Todos Santos had its start in sugar – it was the Baja sugarcane capital during the 19th century when eight mills ran full-time. After the natural spring dried up in 1950 and the last mill closed in 1965, Todos Santos ran into decline.   There are still remnants of  old sugar mills to be found around town. 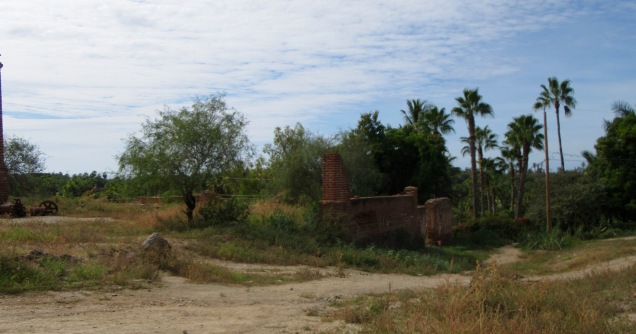 Luckily, the spring returned in the early 80’s and agriculture began to flourish again. Then the new 4-lane highway was paved through, which helped to encourage tourism. Today Todos Santos has completely transformed, with numerous art galleries and restaurants. It has been declared a Pueblo Magico, and a stroll around the streets is a feast for the senses. 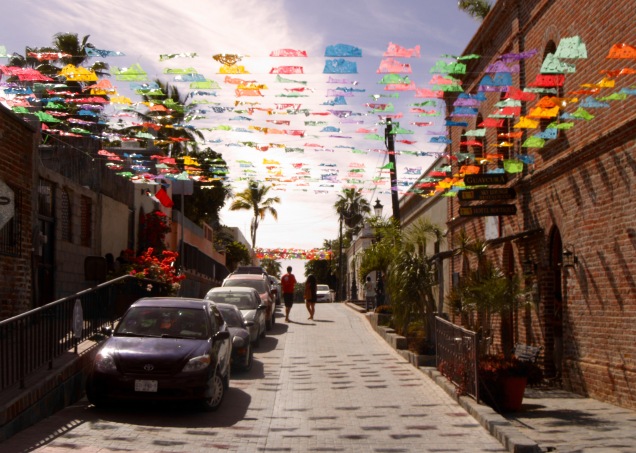 While most of the buildings have been immaculately restored, there are still a few that are a work in progress – this one appears to be waiting for a shipment of windows. 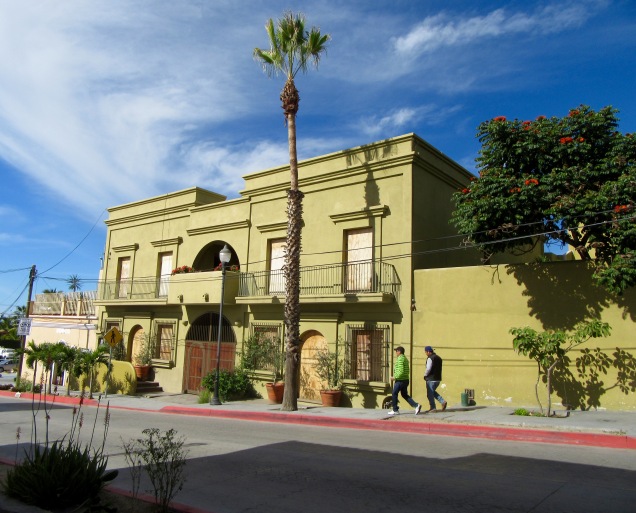 Roped off  and waiting for the restoration to begin. 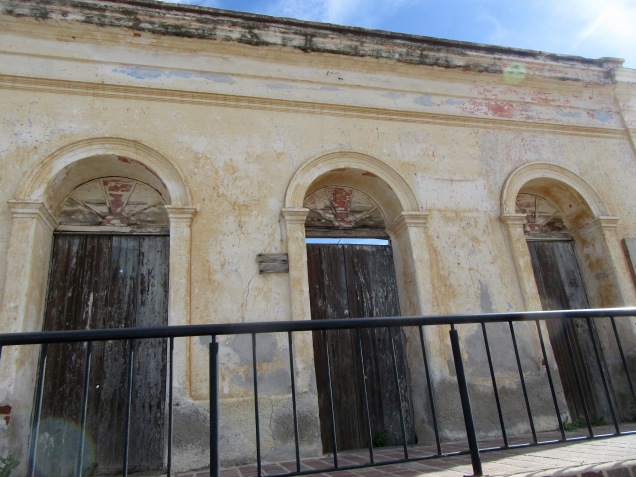 Purity of colour and form. 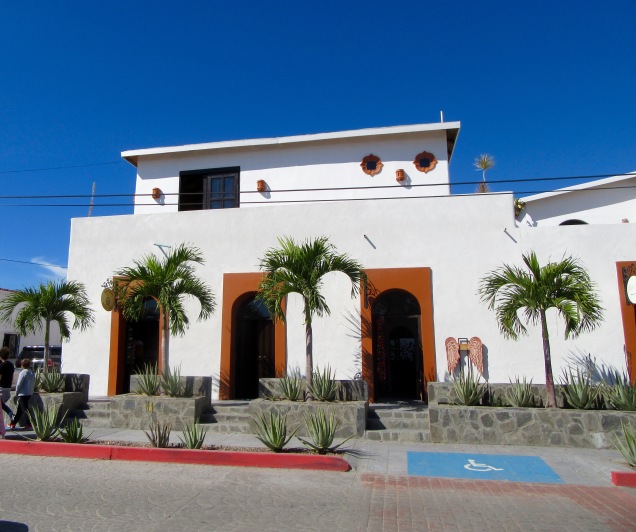 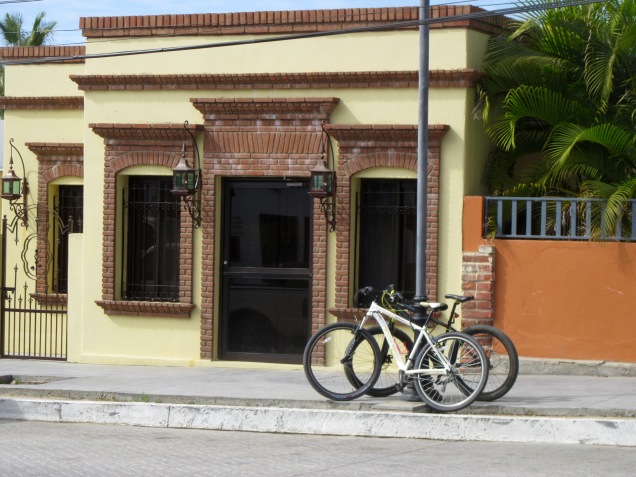 And flowers everywhere. If there is anything more unabashedly lush and overgrown than a Mexican garden, I don’t know what it is.

The artistic appeal of the gallery exteriors is almost as great as the paintings and sculptures that are displayed within. 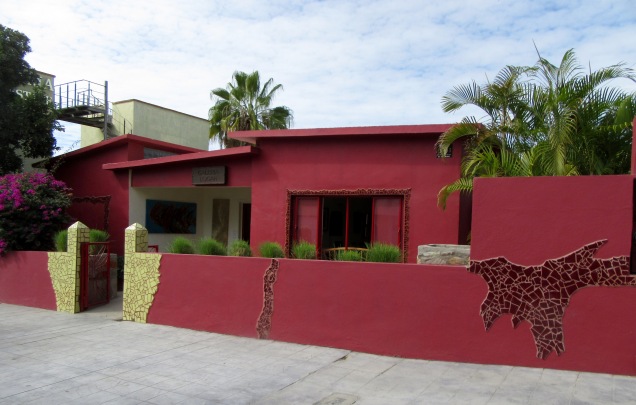 I love the use of brilliant colour contrasting with the sharpness of geometric lines and stone. 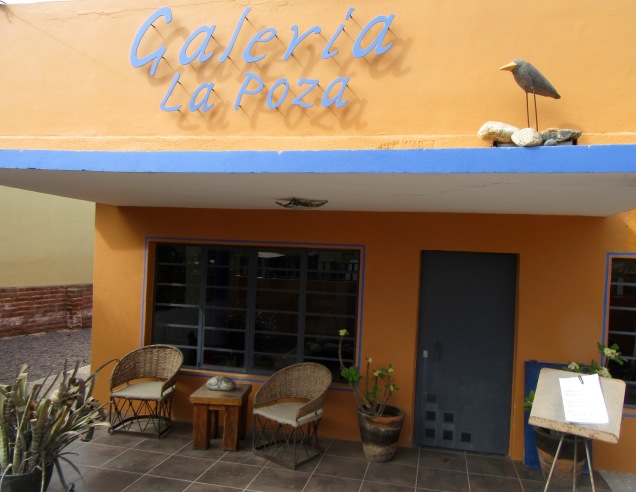 Mexicans are masters of making stone, brick and concrete inviting – of course you want to go into this gallery. 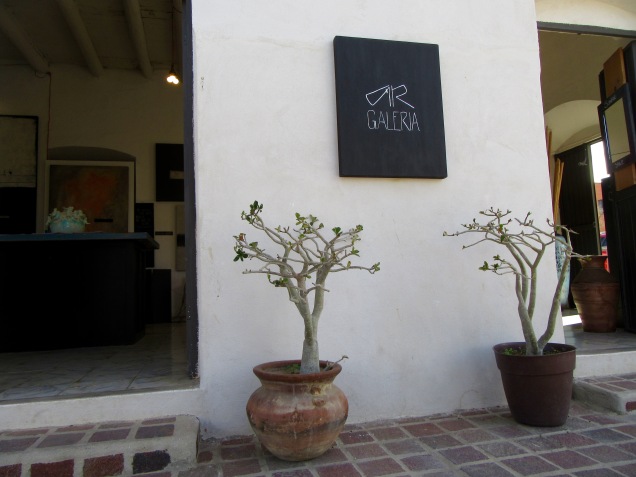 There are a number of bespoke galleries, including Ezra Katz. 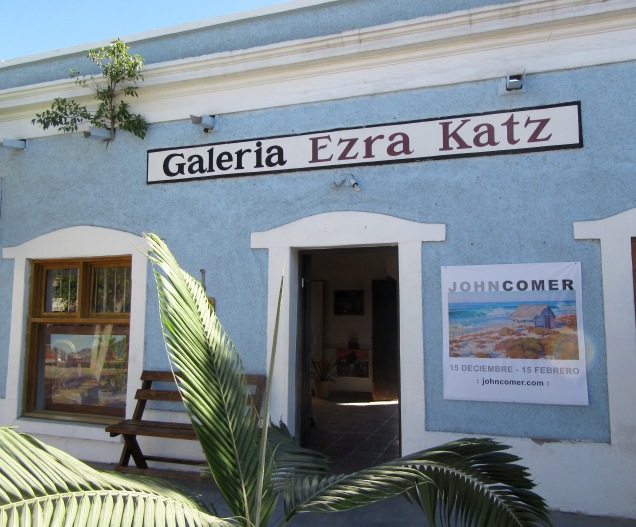 And then there is this silliness – poking fun perhaps at the tourist kitsch that floods Mexican markets. Irony must be dead, as it looked to be long-shuttered. 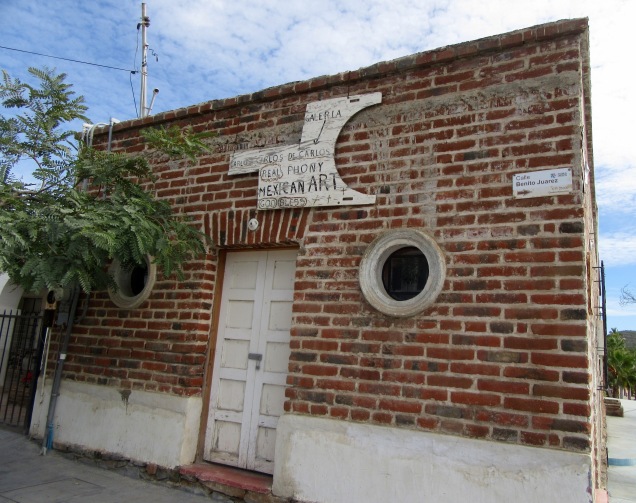 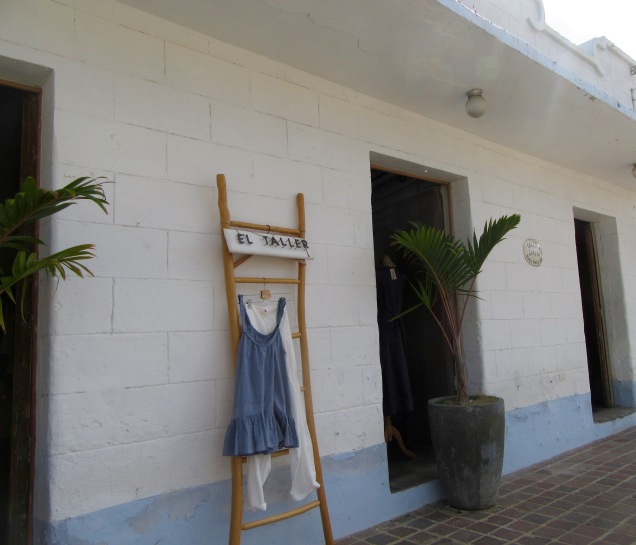 Careful renovations have been done to maintain and enhance the integrity and beauty of the old brick trapiches or mills that are now re-purposed into shops, offices and restaurants. 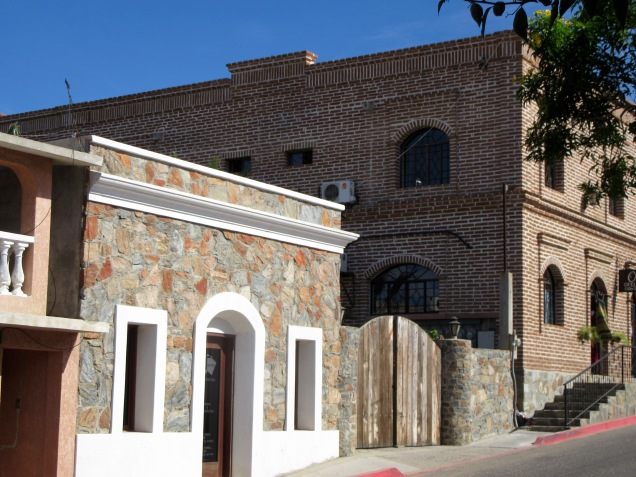 And then, there is…the Hotel California with its many rumours about being the inspiration for the Eagles iconic song of the same name.

The Eagles have vehemently denied that this hotel (or any hotel) was the inspiration for their song and launched a successful lawsuit. 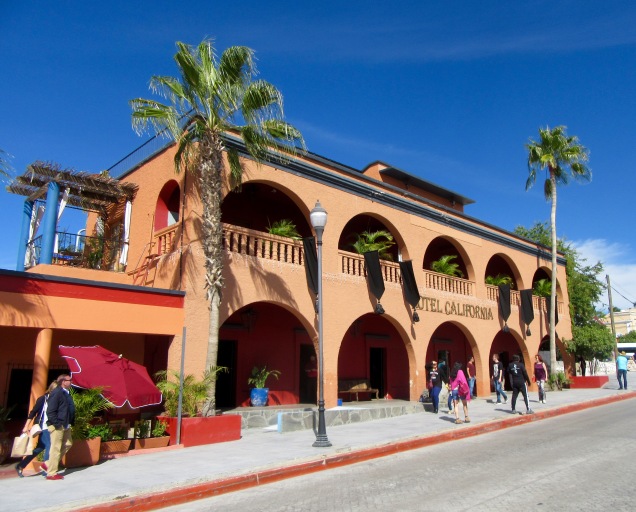 While the current owners continue to dispel that myth, the rock-and-roll whiff still clings.  Originally built in 1947, the hotel sat empty for a number of years until the late 90’s, when Canadians John and Debbie Stewart (from Galiano Island), bought the crumbling property in 2001.  They took four years to meticulously restore it. Today it has 11 guest rooms, a gorgeous garden and swimming pool, restaurant, bar and gift shop and hundreds of visitors stream through daily.  I had a chance to speak with Debbie and she filled us in on the history of the hotel, as well as her personal attachment to both the hotel and Todos Santos.

We did not stay at the Hotel California. After trying and failing to find a suitable campground in the area, we took the advice of a neighbour from La Paz and decided to try beach camping.

Here are the facts to consider about camping in south Baja – the more expensive and built-up the destination, the less your chances will be of finding a reasonable RV park. The tourist shift down here is notable – high-end restaurants and hotels proliferate, to serve the planeloads of tourists who fly into Cabo and La Paz. There is way more money to be made in hotel rooms than in campgrounds. Todos Santos is just an hour away and has developed its own polished aesthetic. “Expect higher prices“, was one apt description of travelling through this area, which is code for: “Expect American prices.”

The best camping experiences in Baja are also the ones where you can boondock right on the beach. It really is as romantic as it sounds – falling asleep to the sound of waves, having a fire on the beach, watching the stars at night. And it’s free! But… many of the dirt roads that lead to the beaches are not suitable for many RVs – they are rutted and gnarly with deep dips and drop-offs – and that’s before you arrive at the beach. Once there, you have to watch for tide lines and deep pockets of soft sand or mud.

We took the chance and slowly rocked and bumped along until we found a spot on the beach and parked beside a dune. Right next to us was deep sand, but there was a bit of a path we could navigate. We were in. That van behind us? People from Gabriola – chocolate-makers Ron and Nancy.  We sat together over a fire one evening, along with a couple from North Carolina and another couple from Germany. 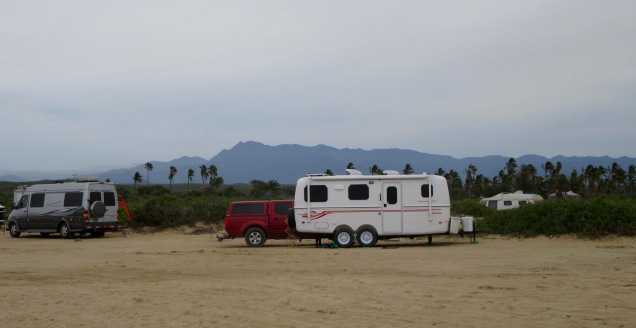 If you camp on the beach, you have no electricity, no water, no place to dump your waste water and if you aren’t bringing a toilet with you – no toilet.  You need to be inventive – we still don’t have the hang of boondocking, but we’re getting there. At this point, we know how to dry camp for three days before we need to get hookups. We both went four days without showers, which is never my first choice –  something not even the best wet wipes can remediate.

But…this is the sunrise that greeted us every morning at 6:30 a.m. 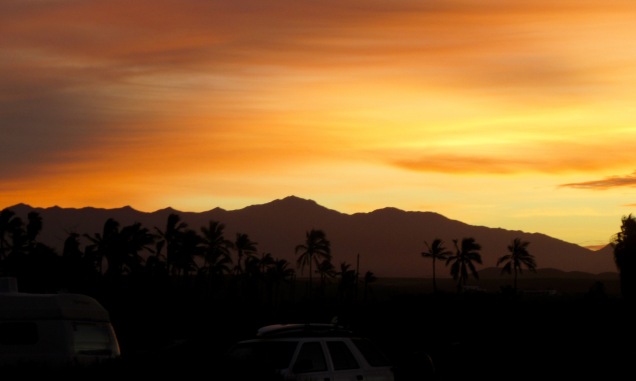 We’d make coffee, stroll down to the beach and watch as the surfers would roll up. If the waves are behaving, this is a pretty sweet surfing area. Most days there were no more than half a dozen surfers in the water. 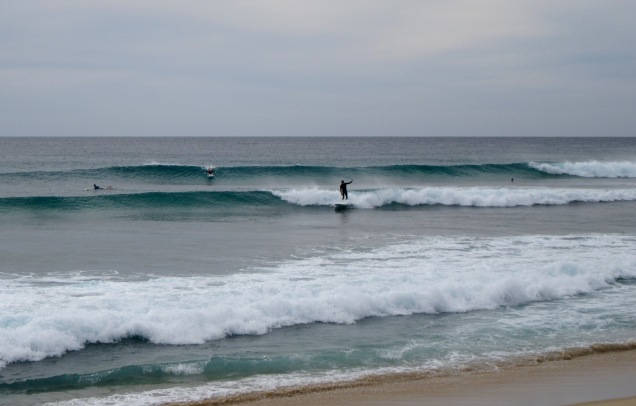 These beaches are not considered safe for swimming, unless there is no wind and the water is calm. Despite the warning signs and the fact that there was not a single other swimmer in the ocean, Stephen went in swimming twice, although he did admit that the second foray was “intense.”

This is a stretch of the Pacific Ocean that is not to be messed with: 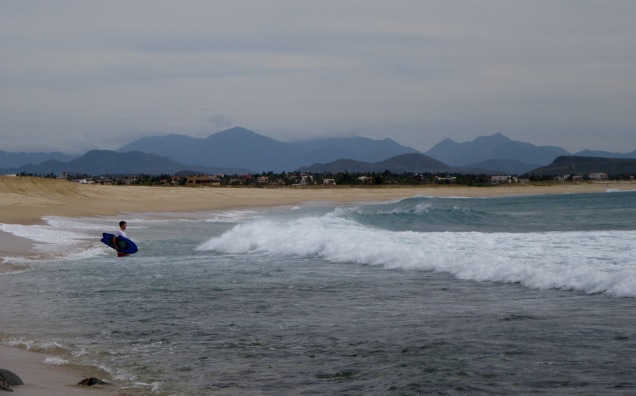 That magical moment when the sun is beginning to drop and everything is touched with silver: 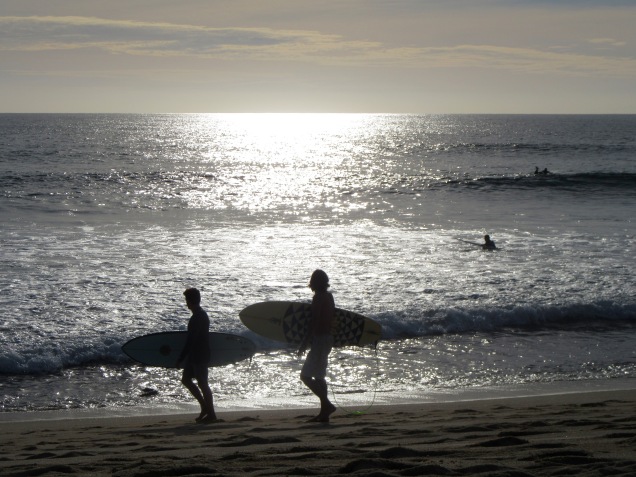 Besides watching surfers, scanning the horizon for whales and flying manta rays, we were treated to the tireless joy of kids and dogs, playing at the beach.

Although we cooked at our campsite every night, during the day while we were sightseeing we ate in town.  You don’t need to drop a bundle (although you certainly can) to eat well in Todos Santos.  You just have to adjust your expectations a little. Want an authentic taco stand that has been in business since 1995 and serves fabulous fish tacos? Look no further than Tacos Barajas. 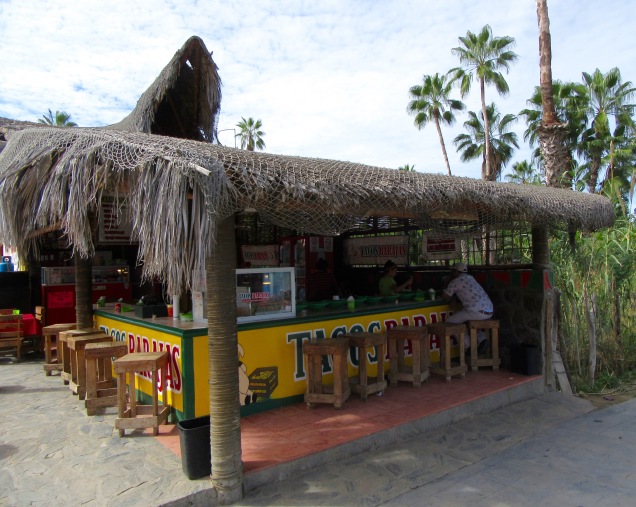 Their fish tacos are served with a platter of condiments and as long as you realize this same dish has previously graced another table and been handled by other diners,  you’re all set. This is common in most taco joints – one cannot be queasy about the open-air condiment dishes that are shared by all. It adds to the ambience. 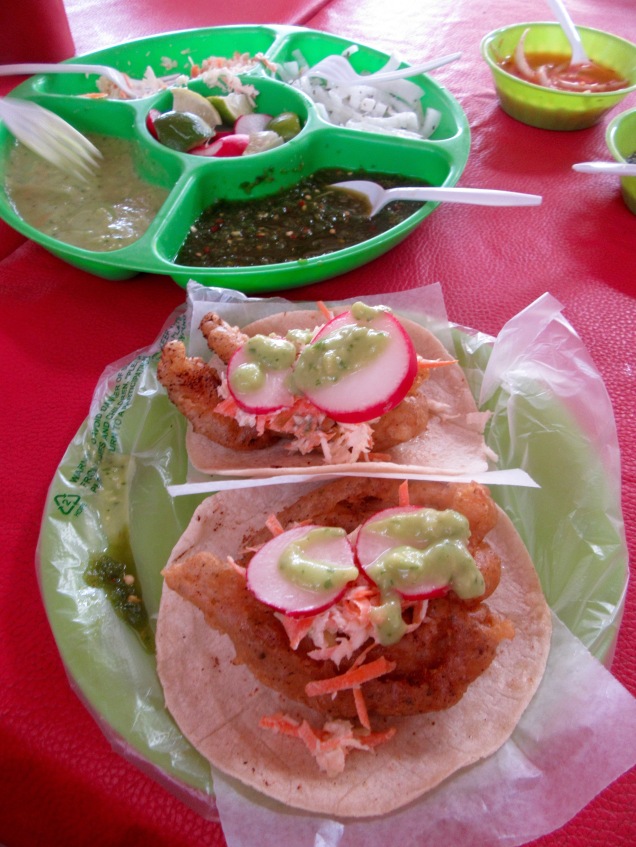 There are many really scenic beaches around Todos Santos and plenty to do in town. We could happily have stayed another couple of days. We check out La Poza, a laguna on the south end of Todos Santos, but in true Miller-Burr fashion, managed to miss the “easy” road to the coast and ended up driving up another goat path that took us above the town and back down over a hill where we met up with a dead end at a hotel. We parked there and clambered to the laguna over rocks. Well worth the adventure. 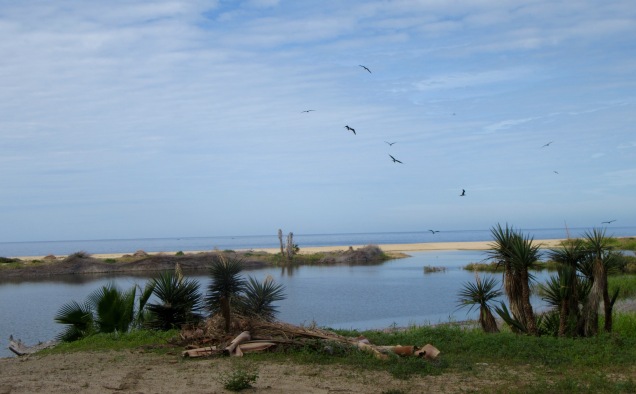 Just past the laguna, we saw a pod of whales breaching quite close to shore. No photos of those, but I’ll end with a shot of the beach. 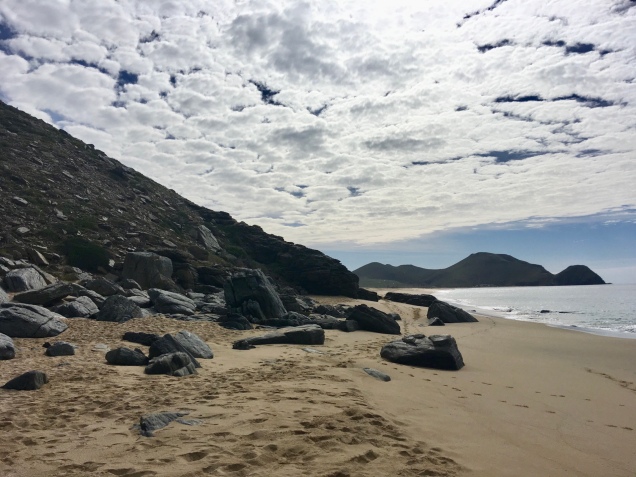 Now we are heading for the other coast – the Sea of Cortez, to Los Barriles to explore that area and use it as a base for interesting day trips.

14 thoughts on “Todos Santos – all saints, all sugar”