Well, sooner or later, it had to happen. We have driven throughout Mexico three different times, for a total of nine months and for more than 25,000 km. We have been pulled over for speeding and waved off with a warning. We have had a police officer in Michoacan (a cartel state) shake our hands and thank us for visiting Mexico – this during a time when tourism had dropped drastically due to cartel violence. We have had police officers help us when we were hopelessly lost. And in spite of our positive encounters with the law, we were both very conscious of widespread police corruption and of the infamous mordida – the “bite” put on tourists for bogus traffic violations. We didn’t think the police were our friends, but we somehow felt immune to them. Still, when every Mexican blew through stop signs and red lights, we dutifully came to complete stops.

Before I tell you our sad story, let me assure you we were well aware of the crooked practice and thought we were prepared for being pulled over. We had read the forums and knew the drill. Don’t hand over your licence, just deny the charge, stay calm and polite and insist on going to the station to pay the “fine” directly. Since the cop has no intention of going to the station, invariably he gets fed up and waves you on. But…other circumstances prevailed.

We were using Google maps on our phone to lead us out of Tecate and to the U.S. border. Unfortunately that map had not been updated since the road changed to “pedestrian only” three years ago and we found ourselves in a narrow area with virtually no space to turn around. Thankfully a kind man stopped to direct Stephen how to back up with almost no wiggle room. He proudly banged on his chest, “truck driver” and within minutes we were on our way again. We had to drive several blocks before we could make a U-turn and then head back for another try for the border. We took the turn and then the road split into three, with absolutely no signage directing us. We took a chance and made the wrong turn. By now we were both in a state.  I spotted a cop car coming in our direction, flagged him down and sure enough, he wheeled around, put his siren on and pulled in behind us. By some mystery of magical thinking, I believed this man was wanting to help us, so I hopped out of the car and walked back toward him.

That was my mistake. He became very agitated and aggressive and ordered me back to the car. He then proceeded to tell us that we had driven through a stop sign, past an emergency building and I had also broken the law by getting out of the car. All of those infractions carried a heavy price – 2400 pesos (about CA $170.00). We had two choices – we could go to the judge and plead our case and that might take a couple of days, or he could pay the  fine in the office on our behalf.  He also informed me he wanted to speak to the driver only (Stephen) as I was flapping indignantly in front of him. Stephen told him he wanted to do the most efficient thing, as we just wanted to get out of the country.

We both had plenty of money in various hiding places, but I had US$100 freshly cashed in from our remaining pesos and stashed in my pocket. Stephen helpfully pointed out that we had that sum at our disposal and that was his mistake.

These guys usually score about $10 or $20, if they score anything at all. This cop lit up like a Christmas tree and thought that sum might just help us out of our difficulties.  We followed him down around the corner and pulled in behind him. He produced a “violation book” and pointed out where our transgressions were listed. Since it was written in Spanish and we had already established our knowledge of the language was slight, it could have been a washing machine repair manual for all we knew. He instructed me to put the “fine” in the book,  he closed it up and stuck it in his jacket – as if it had never happened. He made his way back to his car, then instructed us to follow him to the border.

Then came the “If only’s.” If only we had gone straight instead of left.  If only I hadn’t flagged the cop down. If only Stephen hadn’t mentioned a sum of money. If only we had remembered to stay cool. If only we had remembered we were in the right and the cop was in the wrong.  We were caught out when we were vulnerable and frustrated and lost and we paid for it. It took us a while to get over our fury (at the cop and at ourselves) and embarrassment and self-flagellation, but as the late, great Nora Ephron would say, “everything is copy.”

This has not turned us off Mexico one little bit, but it is a good reminder – as much as we feel comfortable and familiar in Mexico, it is a foreign country and they play by a different rulebook.

Thankfully, our previous day and night in Baja was so delightful that those sweet memories far outweigh the sour taste left from the crooked cop.

Our friends Cindy and Bob are members of Harvest Hosts – https://harvesthosts.com – an organization that allows people to camp on farms and in wineries at no charge, usually for one night. The hope is that you will buy wine or produce from the hosts – an agreeable arrangement for all.

They were staying at L.A. Cetto, Mexico’s largest winery for their last night in Baja and suggested we do the same. We arrived and pulled in to this dreamy spot. 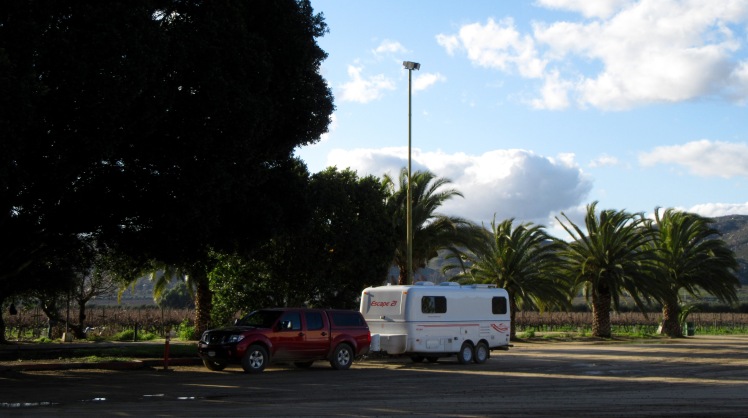 We set up and went into the winery for a tasting of their reserve wines – three white and three red. This young man Adrian, gave an excellent tasting and was knowledgable and passionate. He is 27 years old and working toward his dream of having his own vineyard one day. He discovered wine while earning his culinary papers and has switched fields. He and his girlfriend (a biologist) want to travel to the Okanagan in Canada and to New Zealand to learn as much as they can about wine production in other parts of the world. We bought two bottles of wine, a Nebbiolo and a Terra ( made from four grape varietals in the area). 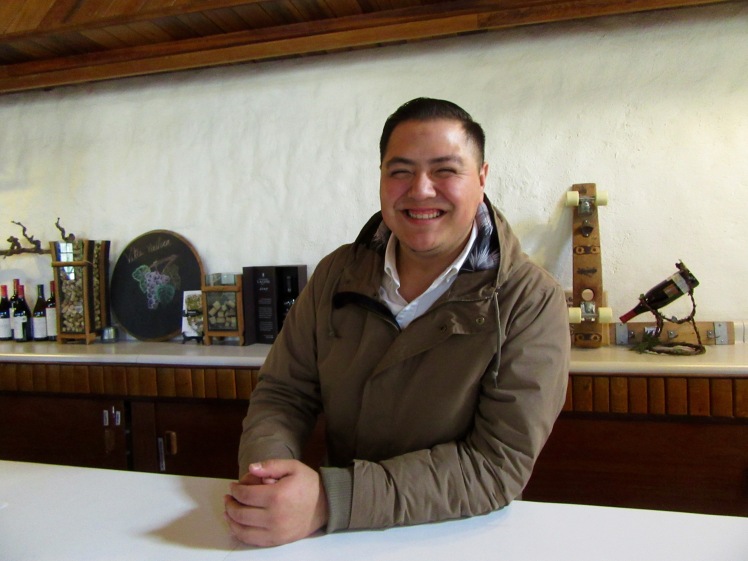 We then went for a walk around the vineyard – it was about 3:30 in the afternoon and the light was pure magic. 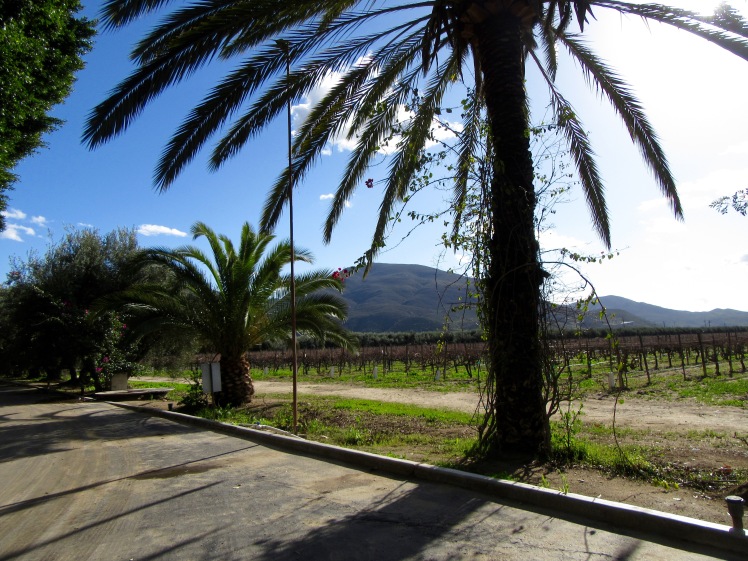 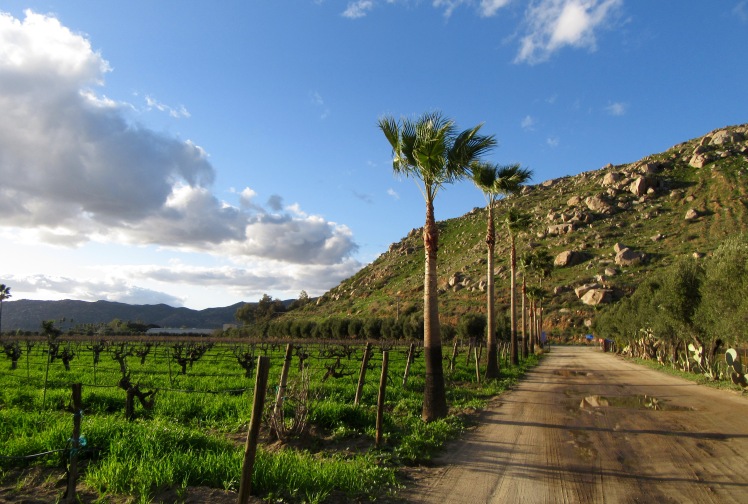 Our very last night in Baja was idyllic. We have managed to have a few laughs over our border mishap, or as Stephen chooses to call it, “our special escort out of Mexico.”

We are now in Arizona, in the small town of Ajo and enroute to our first National Park (trying to fit as many in as we can while they are still open) – Organ Pipe Cactus National Monument.  We’re having fun, but after our contact with all the young’uns in Baja with their old camper vans and surfboards and rescue dogs, this is a serious change of pace.

We are in Snowbird Country, or as we like to say, “No Country for Young Men.” Lots to report – see you again in a few days.