First of all, I strongly dislike the term “snowbird” and the image it portrays.  Older folks fleeing snow and cold and then huddling in groups for safety and comfort. There is little diversity in campgrounds and RV parks – this is the playground of senior retired white people in protective hats and three-season activewear. And yes, this describes Stephen and me as we travel about, but I’m not happy about it.

So you can imagine our chagrin that our snowbird payoff (sun and warmth) is nowhere to be found here in Arizona. If British Columbia’s winter was behaving normally, we would be experiencing this exact weather back home.

We are in Tucson, staying at a scenic campground about 20 minutes out of town, up in Tucson Mountain Park with the coyotes and the cactus, and we’re freezing.  The past two nights have dropped to below zero; this morning we woke up to frost on the truck. This is the coldest and wettest February that locals can remember – at least 10-15 degrees cooler than normal. They are calling for yet another storm system to pass through over the next week; most places will have snow and nighttime lows of minus three to minus six. We have changed plans to ride out the next week – we will head back south to Organ Pipe Cactus Monument for a few days. It is the only place we can find that does not have snow on the horizon.

In the meantime, as they say down east, this is where we’re to. 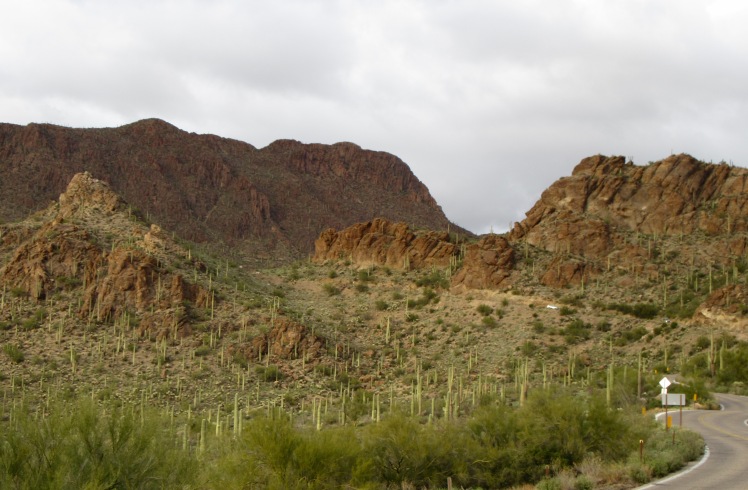 Our campground is just around the corner from this twisty mountain road; a hugely popular campground that is first-come, first-served and competition for a spot is fierce. You must line up as early in the morning as possible to wait for campsites to empty out; being granted a spot is like winning a lottery – they are usually gone before noon. We are here for seven days (our maximum allowable stay) and trying to see as much of the area as possible in spite of the weather.

Tucson is a sprawling city with a stunning University of Arizona campus and an historic downtown well worth exploring.  There are a number of museums, theatres and galleries on campus, including Arizona State Museum.

This museum is largely devoted to the history and culture of the 21 Indian tribes in Arizona. Basket weaving has always been an important indigenous art form – these baskets were exquisite:

I have never seen shoes woven from reed or straw before; these were probably created more for the artistic challenge than for the practicality of actually wearing them.

We were befuddled by this sign, and wonder if it was posted as a result of an over-zealous and missing-the-point-entirely complaint.

There is a section devoted to each tribe and a photo section that was particularly striking.  I loved this photo:

Also on campus is the Center  for Creative Photography; a research and archive facility with exhibitions by Richard Avedon and Ansel Adams, among others. 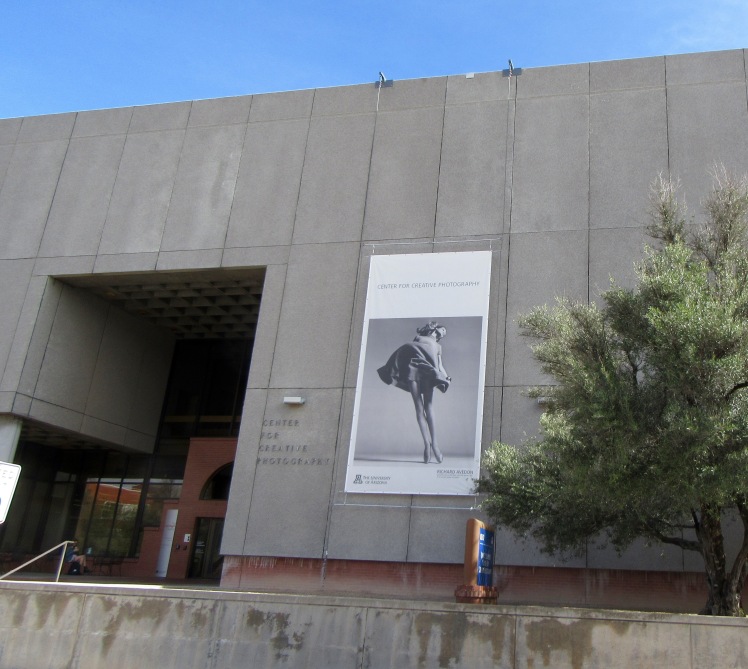 Avedon’s current exhibition is entitled” Relationships”, showing a series of photos in which he captured the chemistry between people.
This couple from Nova Scotia tells quite the story:

Tucson’s historic downtown is very walkable, and we had the excellent Turquoise Trail map to guide us. We followed a turquoise line painted on the sidewalks and consulted the brochure, which listed points of interest along the way.

Every city should do this – it is such an easy, helpful and informative way to explore a new destination. 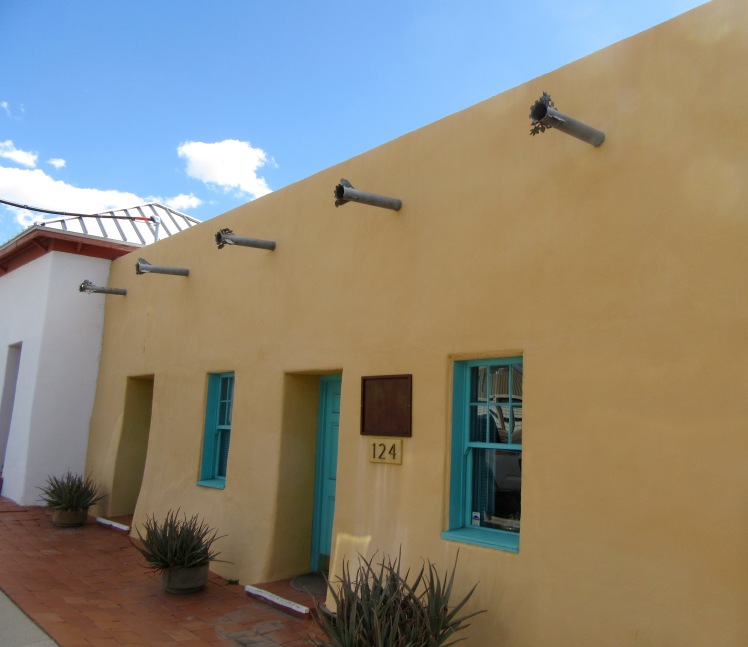 Homes in Tucson are almost entirely one-storey and many have deeply recessed porches to help cope with the summer heat. 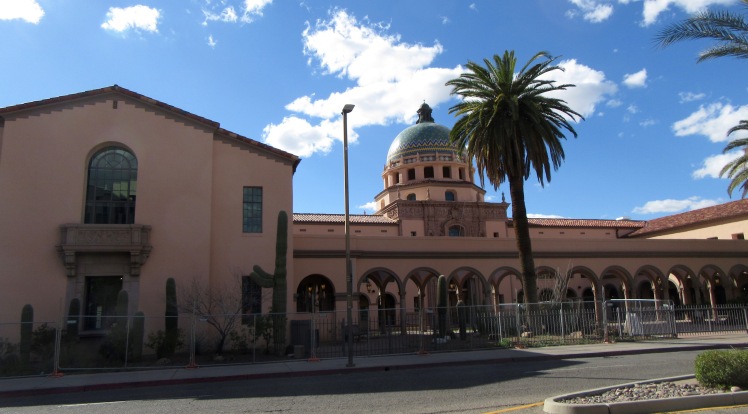 Tucson is filled with interesting old signs and neon. This  apartment building appears to be undergoing a renovation; the lower stucco was being refaced. 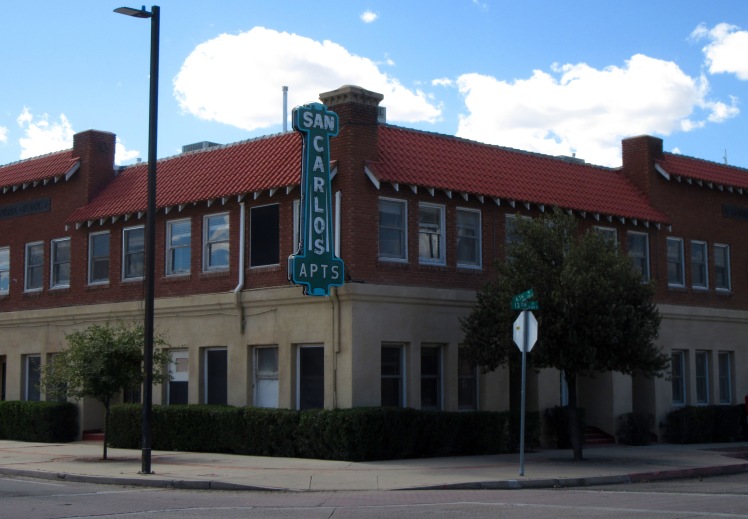 While this hotel and swimming pool is no longer in business, the sign and building remain, waiting perhaps for someone else’s great idea. You can see the turquoise line on the sidewalk (with Stephen in the distance.) 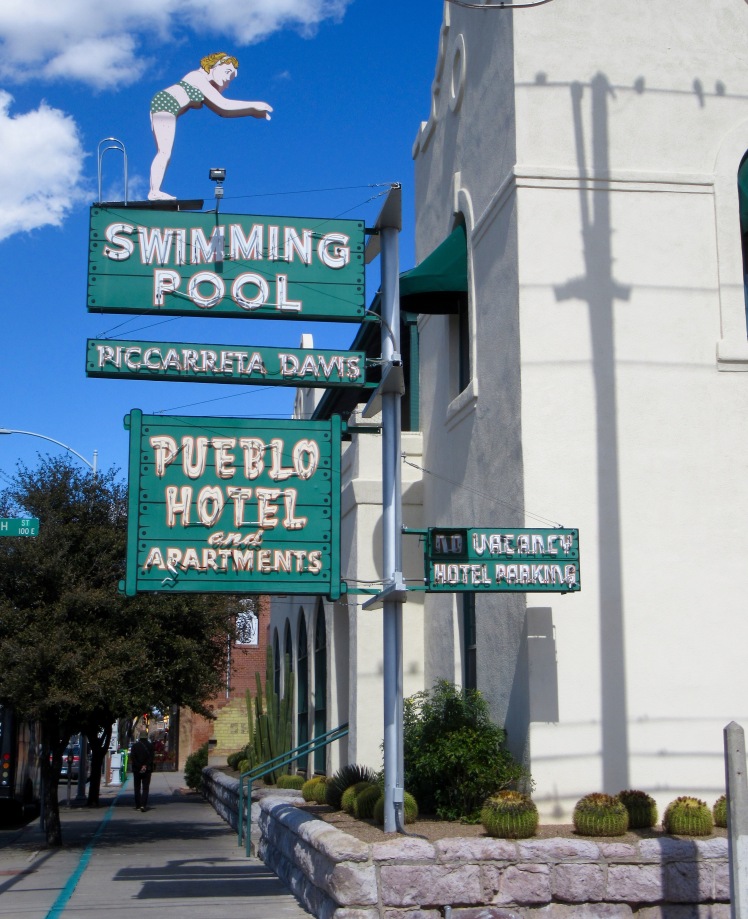 As business plans go, this one is hard to resist: 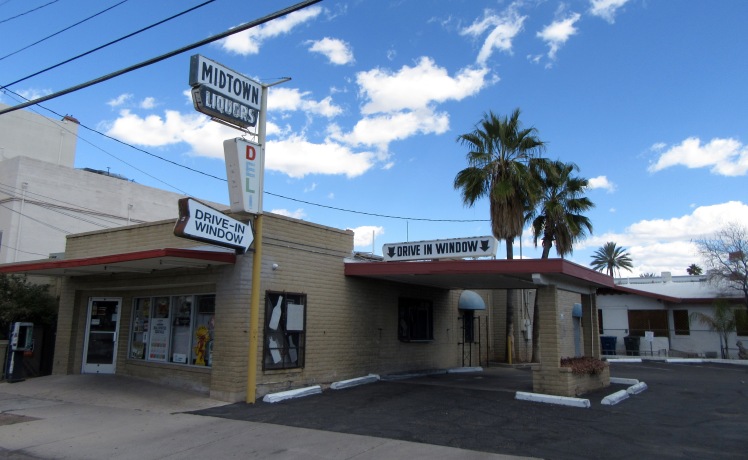 Not all downtown is historic, of course. Modern steel and glass fits right into the streetscape. 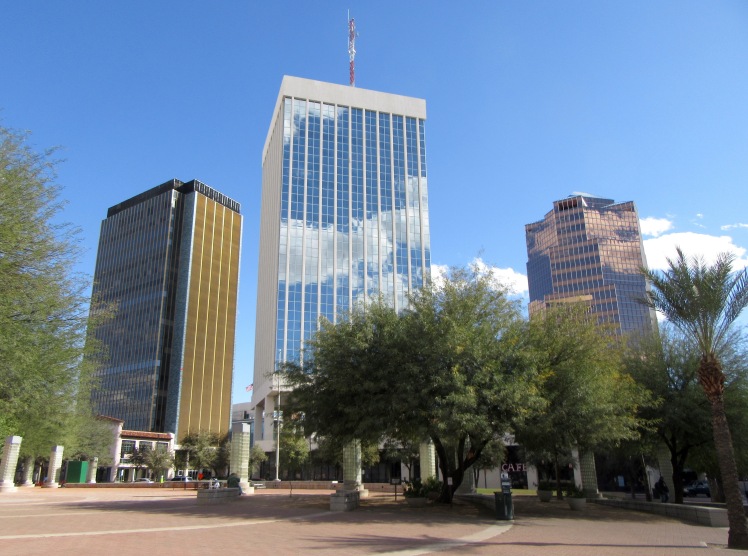 We visited the beautiful double-domed San Agustin Cathedral, went inside and took a pew.

We are not religious, but there is something reassuring about being in the quiet and calm of a church and we often take time while travelling just to sit and reflect.  We witnessed a deeply moving sight. A frail man who was leaning heavily on two canes and appeared to be blind made his way slowly past us. He set down his canes, dropped to his knees and inched painfully and slowly, up the tile floor. When he reached the top, he turned and made his way back, again on his knees. He appeared to be in such pain, so unwell and alone – was this penance, asking for strength?

Not far from the cathedral, we came upon another poignant site – El Tiradito, or The Castaway.

This Tucson Historic Site is a shrine dedicated to the souls of sinners buried in unconsecrated ground. There are burned-out candle stubs, flowers, small notes tucked into small holes in the adobe wall. I wondered about one photo – three young men with their arms around each other, full of life and energy. Two of the men were born in 1971; one in 1977. Two died in 2006, one in 2014. Clearly they had all been friends and now were all dead. How did they die? What was their story – why did they all die so young?

With no clear answers to unknowable questions, our next stop with the Arizona-Sonora Desert Museum.

The 98-acre museum, which is largely outdoors, is comprised of several botanical gardens, aviary, aquarium, zoo and natural history museum. This is a huge favourite with visitors and locals alike; we made the mistake of going on a Saturday and it became very crowded at times. Since the museum is so spread out, the crowds did tend to alternately clump up and thin out.   It is a well-interpreted museum and for the most part, we thoroughly enjoyed our 3-mile walk.

But… and this is a perspective I know many of you will not share, but… we both struggle with most zoos and aquariums. I know there are a number of excellent zoos in the world (Toronto’s zoo, for one), and animal sanctuaries and refuges do important work. The museum had several areas, none of them large, to showcase the area animals. We saw an ocelot in a cage the size of a bathroom, running in circles; demented behaviour that was deeply upsetting. This poor roadrunner also showed distress – it ran the length of a cage that measured about 20 feet. 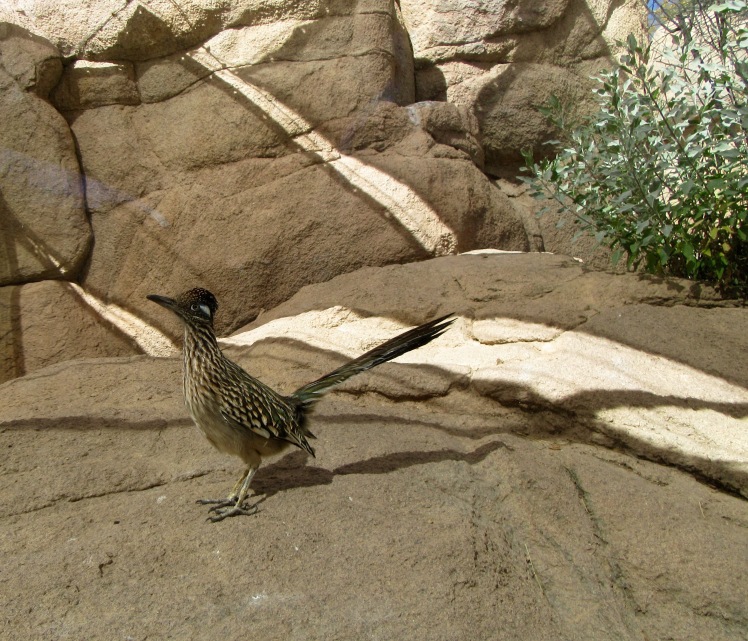 The rest of the desert animals were housed either in fenced compounds or in a large cage designed to look like its natural environment.

We have heard coyotes howling and yipping in our campgrounds, but still haven’t seen one in the wild. This is what I hope to encounter one day in his own turf.

We were both so hoping to see javelinas in the wild – these peccaries are quite the local fixture and as one gentleman told us, we would be more likely to see them in town looking for garbage than out in the desert. He also advised us they could be aggressive and to keep our distance.

These characters were not one bit interested in photo ops, but this will give you an idea of their size and appearance. 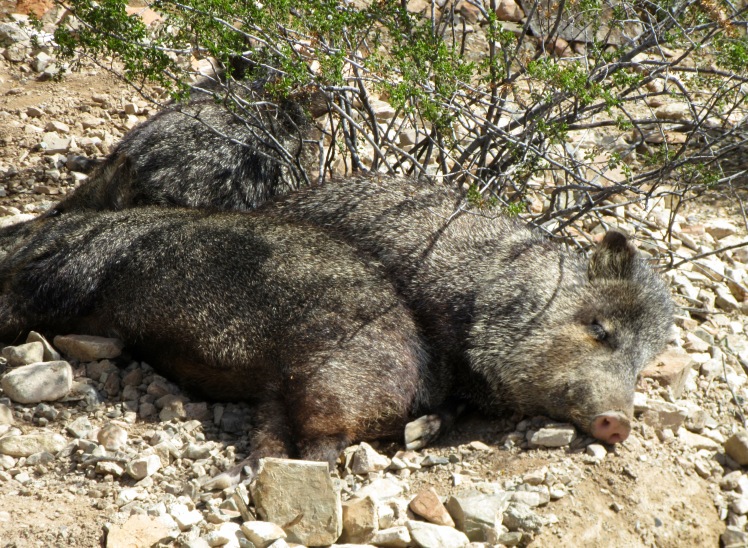 We finished our tour of the museum with a “raptor in flight” show. Five Harris hawks that had been rehabbed and could not return to the wild have been trained to fly close to spectators. They have been trained with food and their handlers put small pieces of meat on branches to allow us all a closer viewing.

They are beautiful creatures – it was a thrill to see them so close. We had been warned ahead of the show to keep our arms down – to take photos at eye level only and not to hoist small children on shoulders for a better look. The hawks frequently flew right over us, literally a foot or two above our heads.

They would then return to the same area, squabbling over territory. 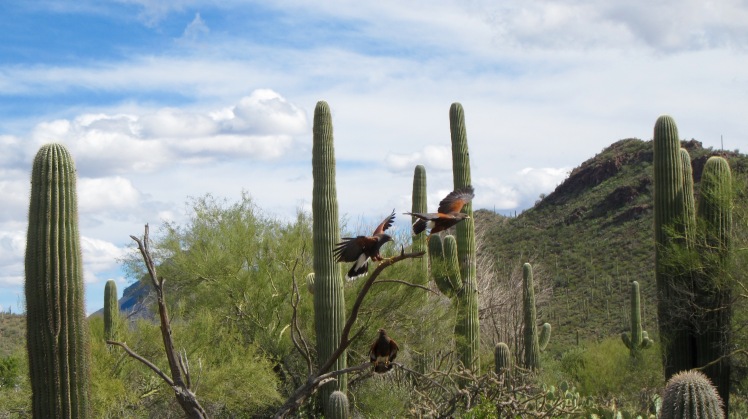 Another common bird in southwestern Arizona is the turkey vulture. 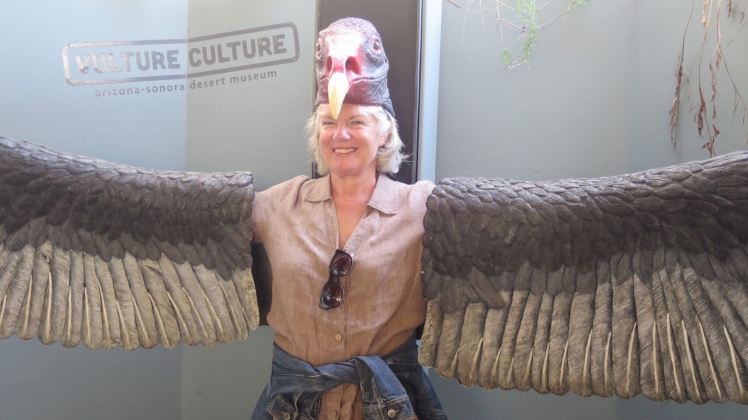 More to come – we have another couple of days in Tucson, and weather permitting, we have a lot yet to see.

10 thoughts on “The Snowbirds are freezing in Tucson”