We first heard about Quartzsite from a couple of brothers we met while traveling through British Columbia last year. They spend their summers working for one of the provincial parks and their winters boondocking in southern Arizona. They appeared to be in their 60’s, in good health and good spirits; far from destitute or desperate.  Reading between the lines, it seemed that although they did not have a robust revenue stream, they had options and their ability to live and work outdoors was a healthy and desirable one.

We read a little more about Quartzsite and were curious to check it out for ourselves.  In and around Quartzsite there are thousands of acres of land belonging to Bureau of Land Management (BLM) that have been designated as Long-Term Visitor Areas (LTV).

Boondocking on BLM lands is common in the United States – there are no facilities and there is no charge.  To make the distinction, boondocking on LTV lands is set up in Quartzsite to allow for the demand. It requires a permit, charges a fee and offers minimal facilities such as a dump station, water fill-up, trash dumpsters and a few toilets.

Fees are ridiculously inexpensive; one can camp for seven months for $180; the land is open from September 15 to April 15.  Since we were there for just four nights, we paid the minimum charge of $40 (for a max. 2-week stay). It is a democratic system; there are no assigned spaces – you drive into the desert and pick a spot. As someone told us, “If you don’t like your  neighbour, you just move.”

Here, our cozy space, tucked in beside a dry creek. 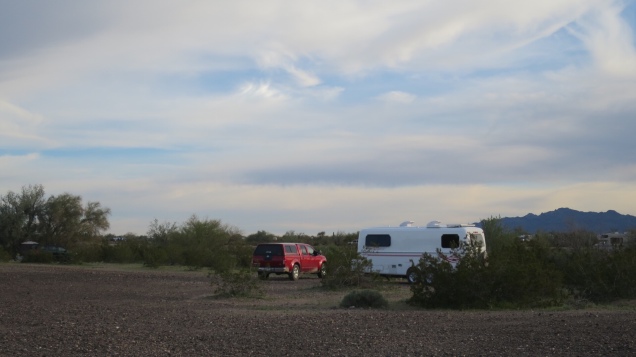 We arrived at Quartzite last week, just as the winter season was drawing to a close. At the height of the season (November, December, January, February), there are hundreds of thousands of RVs staked out in the desert. Estimates have reached as high as 500,000.  By mid-March, the desert clears out considerably, as normally the day-time temps would be getting uncomfortably hot. This year, with much of Arizona being colder and wetter than usual, we just experienced mid-80s, but such an intense sun. 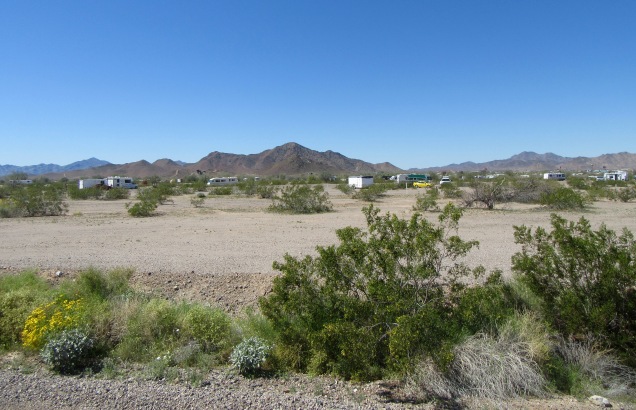 Cyclists, hikers and dog walkers are here to take advantage of the trails that circle the area. Off-roading is hugely popular – dozens of ATVs ride up into the mountains and are gone for hours. Surprisingly, we found it extremely quiet – the only noise was one generator in our area; and it ran for just two hours every afternoon. I’m sure it is a different scene in mid-January. 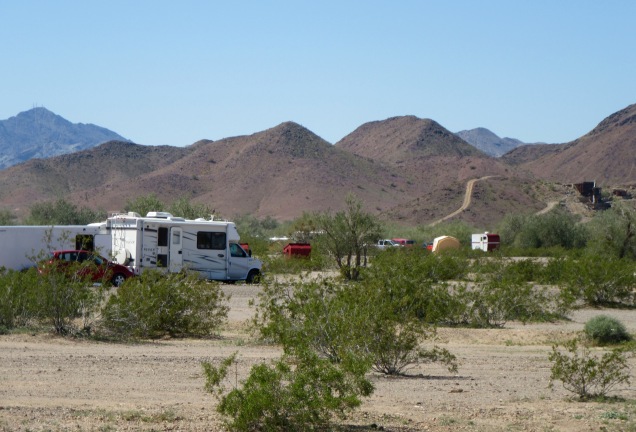 So, while we enjoyed our space and privacy, we also did not get a true picture of the community of Quartzsite during its peak.

Tens of thousands of people are drawn to the area to attend numerous events such as the Gem and Mineral Show, the RV Show and the ongoing swap meet.  The swap meet is famous – vendors come from all over to sell everything from jewellery to socks to RV parts to antiques. It’s a five-month garage sale.  By the time we arrived in mid-March, many of the stalls had packed up; all that was left was the junk that nobody wanted. We could have picked up cookies for 50 cents, but their best-before date was September 2018.

Buying things is a major pastime here, but if shopping is not your thing, every day offers activities from Spanish lessons to line dance to pickle ball. Although it is most definitely not our scene, we could see the attraction for snowbirds. Quartzite is affordable, warmer than wherever you live up north and has a built-in community.

This is also the place to find spare parts of your RV, or tend to those pesky housekeeping issues you’ve been putting off.

We were struck by this sign (a multi-generational business, no less), and wondered what essential maintenance we may be neglecting with our own rig.

Quartzsite is not pretty; the entrance sign is the most attractive part of the town. 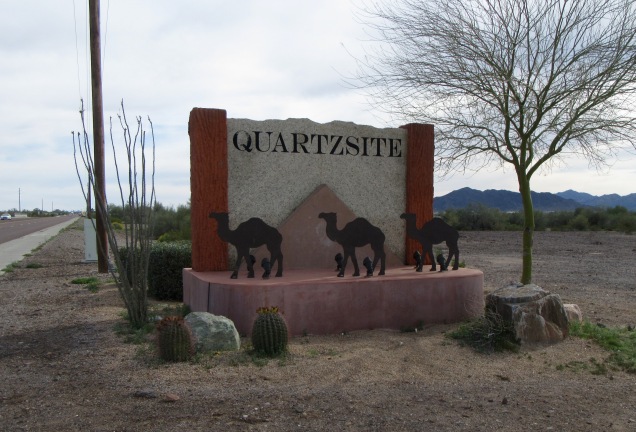 Camels? Why yes. Back in 1855, Jefferson Davis (later president of the Confederacy) hatched the idea of importing and dispatching camels to build a wagon road through the Southwest. After 77 camels were brought to Texas, they needed actual camel drivers. Philip Tedro, (who was born a Greek in Syria, and later converted to Islam and took the name Hadji Ali) was their main man. He became known as Hi Jolly since no-one could pronounce his name. By all accounts the camels were a great success. Unfortunately, when the Civil War broke out, the camel project was abandoned and some were sold, but the rest escaped into the wild.

This colourful tale is related on a plaque in the Hi Jolly cemetery, named in honour of the famed camel driver. 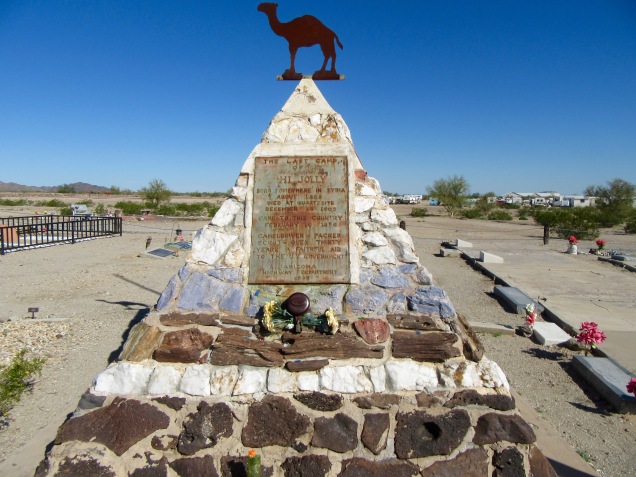 There is very little to do in town – a scattering of fast-food restaurants, some dollar stores,  and a little library. Off-season, it becomes a sleepy, dusty town.

Since there is not so much as a creek within many miles of town, we wondered about this restaurant (which now appears to be closed.) 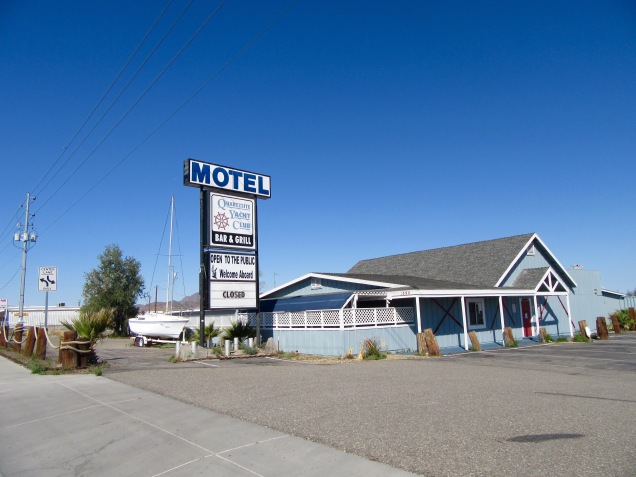 Back in the late ’70s, a local businessman decided that a little humour and business savvy was needed and revived an old bar, renaming it the Quartzsite Yacht Club. His motto was “long time, no sea.”  He worked around the obvious water challenges by offering a one-time membership fee of $49.99 (which would be reciprocal at other yacht clubs in the world), and it took off. Memberships sold like hot cakes (over 10,000 memberships), and his restaurant was a success.

After driving around town for a bit, the inspiration for this ice cream parlour became a bit clearer. 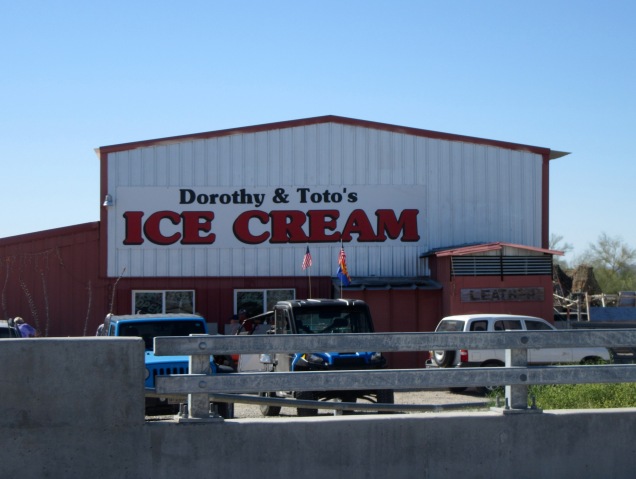 We wandered around some of the outdoor stalls. Rumour had it there is a naked bookseller in Quartzite, but we didn’t run across him.

You remember the popularity of T-shirts with messages like, “Gas Tank for a Sex Machine” (to be stretched over a bulging male belly, with an arrow pointing southward, in case the meaning was lost). Another shirt that made the rounds was, “I’m with Stupid” (again with an arrow pointing sideways, which would require a little thoughtfulness –  “Stupid” would need to be walking on the appropriate side).

Well, in these  dark days when thoughtlessness is celebrated – even “The Stupids” have packed it in. 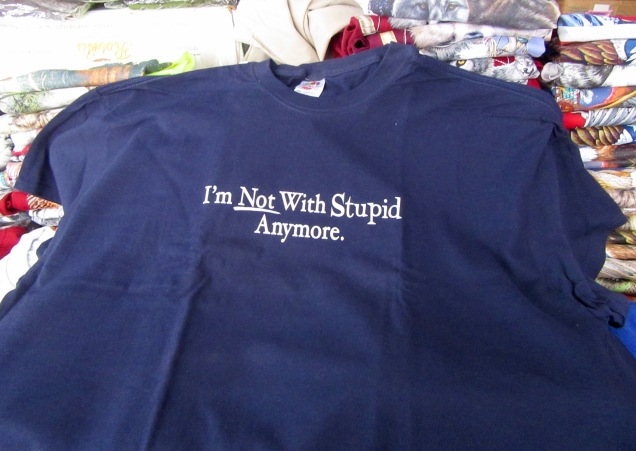 We wished we had come to Quartzsite a month earlier to experience it properly. As it was, our time there was conflicted and nothing as we had imagined it to be.

We were not surprised to see Trump flags – this one flew on a jewellery store. 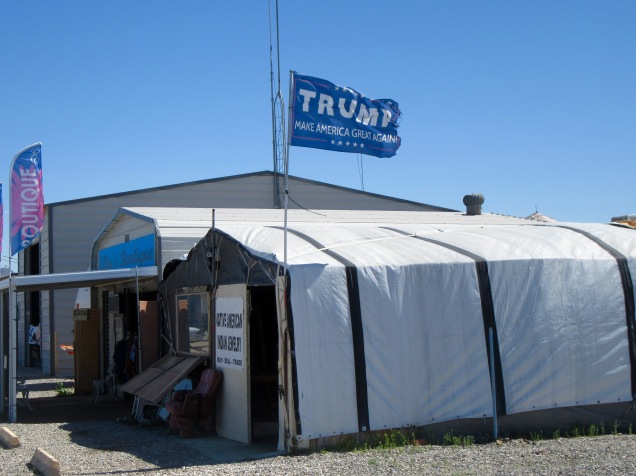 But we were very surprised to see Trump flags flying on RVs, camped out in the desert.  As Canadians, it is not always easy to understand the American obsession with flying flags of any stripe – we don’t tend to be flag-wavers. But somehow flying a Trump flag at a campground feels like an aggressive act, ” He’s my Man. Make America Great Again. Build the Wall. YEAH!!!”  Stephen thinks I’m over-reacting.

But I was not over-reacting to seeing a Confederate flag flying. Now, it was only one flag, but it is such a controversial statement to make that it was hard to ignore.

And possibly, because the crowds had thinned out so much, we really noticed the poverty.  An older man had pitched a tent in the gully just down from us. He spent a lot of time sitting in his small car, and from time to time would make the slow shuffle down the road to the toilet. It was cold at night, he was alone and we wondered what he ate. We saw what his life looked like now – what would become of him in a few years, or when his health gave out? Would someone find him in his tent one day?

There were a number of old RVs that were barely road-worthy; someone’s home until the mold or the mechanics claimed them and left their owners homeless. We saw people sleeping in their cars, with makeshift shelters.

I had romanticized Quartzsite before we arrived. I appreciated the idea that a low-income person could live a life of greater choice and dignity here than in a room up north. To a point that may be true, but a 60-year-old travelling in an old camper is still just one health crisis away from being in a very dire situation.

There are tens of thousands of people who come to Quartzsite, enjoy the activities and the community and take the best of it away with them. At the height of the season, we can appreciate that attraction to the area.  That side of Quartzsite – people with mobility, financial comfort and choice –  is every bit as valid as the fact that there are nonetheless a good number of people who live here as a refuge. That disparity may have been more obvious to us at this time of year, with so many of the snowbirds gone.

8 thoughts on “Quartzsite: Boondocking bonanza or land of broken dreams?”