Zion is our favourite National Park so far; so filled with contrast and unimaginable beauty that adjectives are inadequate and our conversation on the trails was often reduced to “Wow”, “Beautiful“, and “Look at That.”

Before we arrived we were warned by fellow travellers in rather ominous tones that, “Zion will be crazy.”  We were a little nervous about having to cope with long line-ups, parking nightmares and conveyor belt trails, but none of that came to pass.

Yes, Zion was busier than other parks we have visited so far, but it is also the beginning of the high season and weather right now is ideal. The real crowds don’t start until the summer.

We were also warned we would not get a campsite in the park; they are reserved months in advance. Also true, except Stephen kept checking online and managed to get us a total of five nights from cancellations, with just one move.

This is the view from one end of our campsite:

When the first Mormon settlers arrived here in the mid-nineteenth century, they called this area Little Zion or “a place of refuge”. The original Paiute name was Mukuntuweap, meaning “straight-up land.”  It officially became Zion National Park in 1919 and has become one of America’s most-visited parks.

Zion has a number of trails closed this year due to rockfall and road washouts, including a chunk of the Zion-Mount Carmel Highway that heads east out of the park. Very luckily for us, we arrived on the last day that portion of road was open before they closed it to begin road repair. The ranger urged us to hop in our car and drive the  nine-mile stretch – we are so happy we had the chance. The masterpiece of this road is the one-mile tunnel that was blasted through the rock; opening the Park from the east side of the state.

Normally we would have entered the Park from the east and come in on this road, but with the washout, they were only allowing vehicles of a certain size and weight through.

A view from the lower level – that hole is one of a number of portals blasted out for ventilation and views and it will give you an idea of the magnitude of the project. 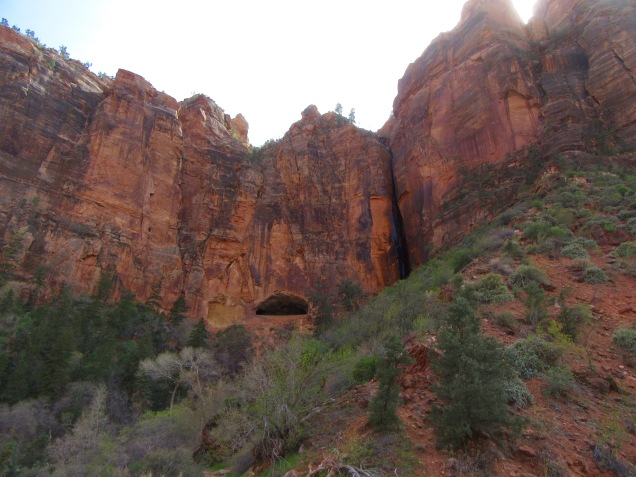 We weren’t the only ones enjoying the rush of this switchback mountain road.

The Checkerboard Mesa was one of the notable landmarks along this road. 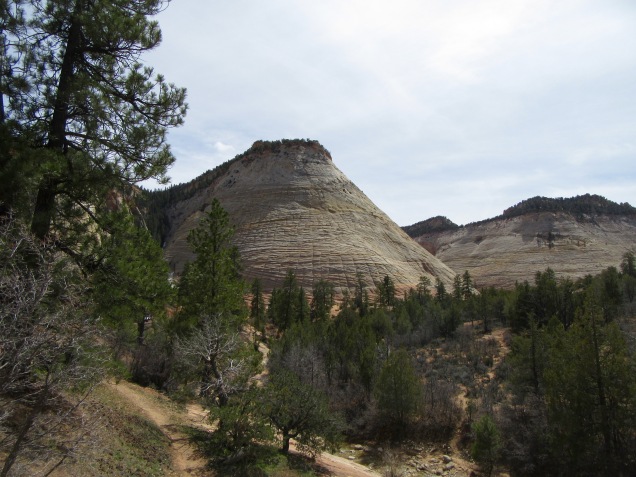 The sandstone mountains in Zion present in a stunning array of colours; from the deepest pink to the palest grey.

Zion has set up an excellent and efficient people-moving system – they provide free shuttles that lead up and down the canyon and into the nearby town of Springdale, where most of the hotels and inns are located.

Cars are not allowed in the main part of the canyon; drivers must attempt to snag a free parking spot in the Park (usually gone by 10:00 a.m.) or pay $20 a day in town. This system works like a charm – visitors hop on and off as the shuttles move up and down the canyon road.

There is never more than a couple of minutes wait and zero congestion on the road, making it a joy for the numerous cyclists who travel the route. 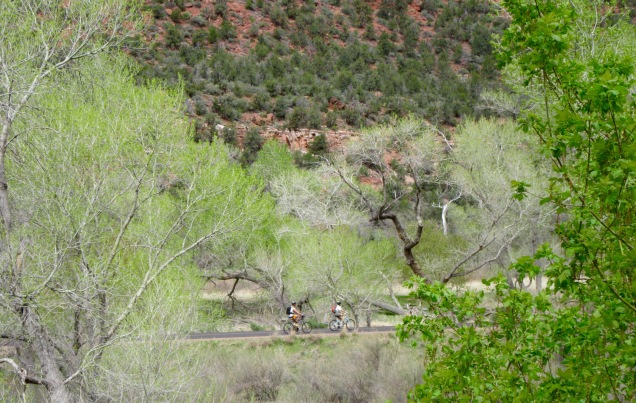 There are dozens of hikes in Zion, from half-hour strolls to multi-day hikes. Due to the extra precipitation and rockfall this winter, many of the longer and more difficult trails are closed. This didn’t impact on us, as our idea of a long hike is five or six hours.

One of the most popular hikes in Zion is The Narrows. We began by hiking The Riverside Walk; a 2.2 mile hike along the Virgin River – The Narrows hike extends at the end of this walk. The Riverside Walk was one of our favourites, and we were in good company that day. Because it is described as “Easy”, there was a bit of crowd on the paths. But somehow it all worked out well and never became annoyingly congested.

This little Virgin River is responsible for the creation of the Zion Canyon. Over the centuries, it cut through the walls  and carved out the formations we see today.

Slightly different perspectives along this trail 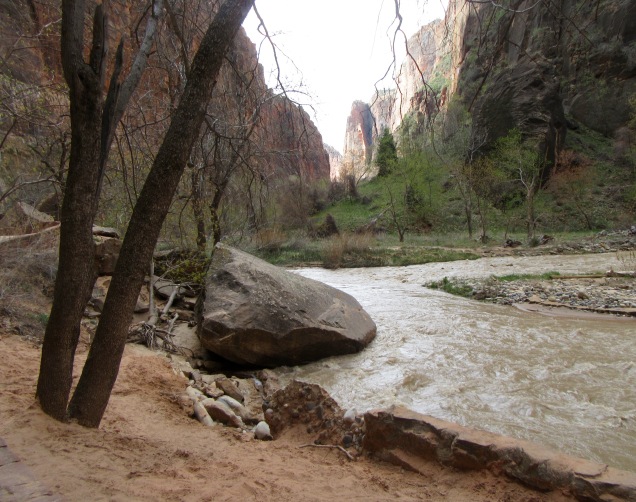 One of a number of waterfalls in Zion

And finally – the entrance to The Narrows. This is a hike that is done entirely by wading in the Virgin River and probably best done in summer, as the water is always cold. The hike takes two days, requires overnight camping and at times is done in chest-deep water, with one’s pack hoisted overhead. We laughed just trying to imagine ourselves as two senior voyageurs with our freeze-dried stew and our wicking shirts tumbling into the river and floating away.

Normally this river is running a lot slower; due to rockfall and other obstacles upstream, it is currently closed as the river is not safe. This is where one would normally begin The Narrows hike.

It is also possible jut to hike in as far as you want and then return back. That would have been a lot of fun and we’re regretful we missed out on that experience.

The other big iconic Zion hike is called Angel’s Landing. We encountered two young women who had just completed it and they were pretty shaken. Going with the adage that one must do what one fears, I was considering it, but for the fact that I’m not good with heights and people have plunged to their death.

This legendary hike goes for 5.4 miles, climbs 1488 feet, and has a series of chain-assisted narrow switchbacks, with 1000 foot drop-offs on either side. You pull yourself up over the ridge to claim victory, and then you have to make your way down again.  I’m sorry to have to admit it, but we took a pass.

Heights aren’t an issue for these big-horned sheep, although we didn’t have the chance to see them in action. They were quite contentedly munching away on the side of a trail.

Climbing is very popular in Zion, and we saw a number of climbers from our shuttle rides up and down the canyon. This is definitely not an area for beginner climbers – take a look and see if you can pick out the climber on this rock face. 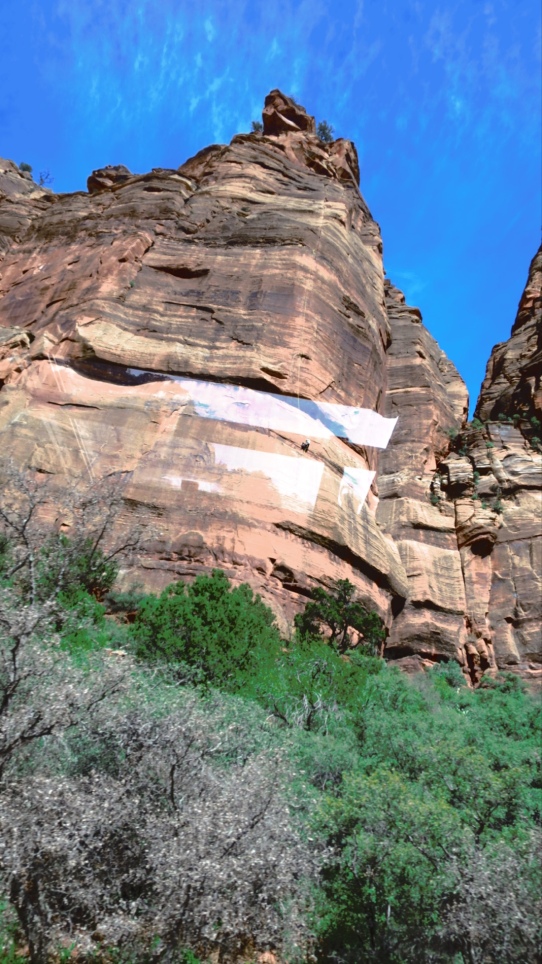 We might not have been scaling mountains or hanging onto chains, but Zion still left us with lots of hiking and fabulous views. 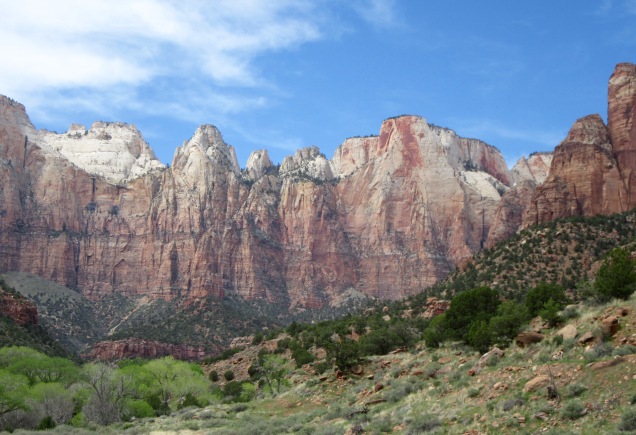 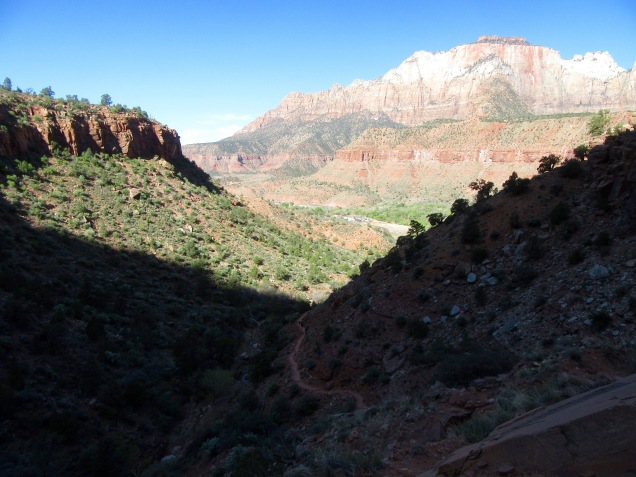 A short but lovely hike was to an area called Weeping Rock. It was possible to climb up under the ledge behind a waterfall.  This was one of the views from the ledge.

Look to the wall on the left of the waterfall – it is a hanging garden of ferns and other plants created by the constant moisture.

We were going to take a day and drive up to Bryce Canyon. That park is at a much higher elevation and two days ago, a storm front went through. We got high winds and a bit of rain – they got several inches of snow. Sadly we will not have a chance to see Bryce this time – it means a return trip to Utah for sure.

We leave tomorrow to hit a few more spots before we arrive at The Grand Canyon. It’s hard to imagine, our trip is winding down.

Oaxaca beer delivery is done by hand- 4 cases of 24 carried on a strong back! #oaxaca #beer #mexico
Just a random fellow at an Artesian market, Oaxaca #art #artfigure #oaxaca #mexicomagico
....or Oaxaca street art can be whimsical. It all adds to barrio character and life. #oaxaca #streetart #mexico
Oaxaca street art is always evocative, creating colourful stories in the barrios. #oaxaca #streetart #culture
The view from our apartment on our final night in Greece- the Parthenon. Sad to leave, but anxious to return to Greece to see much more. #parathenon#greece#athens#acropoliscenter
Monemvassia is also full entrances /doors to space we never experienced. #doors#monemvasia #monemvasiacastle #stephenpaulburr #greece #pelopennese #leavingourselvesbehind