My very first glimpse of the Grand Canyon was squinting through the lens of my red plastic Viewmaster. I was seven or eight years old and highly impressionable. I have Viewmaster to thank for planting the early seeds of my travel bug.  Each Viewmaster came with themed reels; Wild Animals, Seven Wonders of the World, etc. You popped in a reel, peered in through the lens and with a flick of the wrist, presto – a 3-D image would appear. My memory puts the Grand Canyon, Niagara Falls and the Pyramids on the same reel, which I don’t think is correct, but I do remember being enthralled at the image of the Grand Canyon and finding out everything I could about it. My dream was to one day ride a mule down to the bottom of the canyon.  All these years later, we are here and nothing prepares you for seeing The Grand Canyon on the big screen. It is overwhelming. 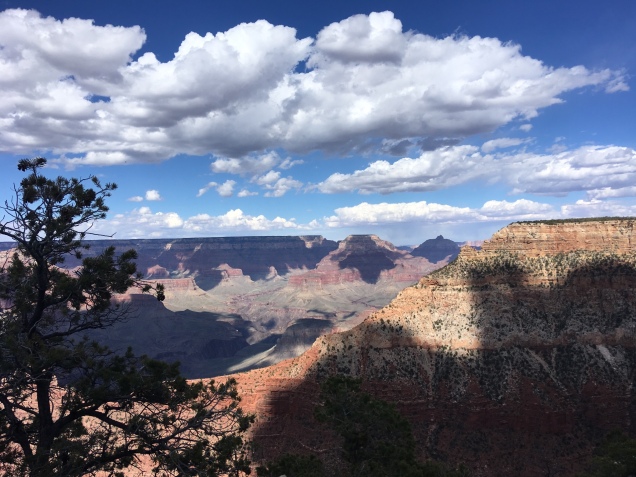 Both Stephen and I had imagined the Grand Canyon to be somehow smaller and more contained, I don’t know why. The Colorado River runs through it for 217 miles. The canyon is one mile deep and 10 miles wide, and because so much of it is visible from the 14-mile Rim trail, you get a tremendous sense of its scope. We met one gentleman who has been coming to the Grand Canyon for over 20 years; each year brings him a fresh perspective and a different adventure.

I appreciated this apt quote printed on one of the interpretive boards: “No language can fully describe, no artist paint the beauty, grandeur, immensity and sublimity of this most wonderful production of nature’s great architect.” C.O. Hall, Grand Canyon visitor, 1895

Once again, Stephen’s perseverance paid off and we managed to grab a three-day cancellation at Mather Campground, right in the Park. It is a gorgeous campground, with loads of space and privacy and our very own resident elk population. We had been told that this is their birthing season, and if we were lucky we would witness a live elk birth.

When I asked where they might go to give birth, I was given a rather incredulous look. While I realize that wild animals do not have midwives, I thought they might seek out a bit of privacy and have favoured spots. However, we were also told we might see one of the magnificent California condors that have been brought back from near-extinction, but that is not likely, either.

Our closest wild animal connection so far (besides the elk) has been hearing coyotes howling a couple of nights ago.

Back to the famous Grand Canyon mule rides I heard about in my youth. These days, you need to book months, if not a year, in advance and you have a choice – a one day or overnight trip. We passed fresh evidence that a mule train had already passed by on the way down on our hike and then these two cowboys appeared, leading more mules down to the bottom.

We wondered what the difference was between a mule and a donkey and this sign explained it, as well as giving us a bit of a history of the use of mules in the canyon.

There are so many things about the Grand Canyon that will have to wait for another trip. Mule ride, Rim-to-Rim hike, overnight hikes – these are all essential GC experiences that require a bit of planning, different gear, and I’ll be honest,  a higher level of fitness than I currently possess. Stephen is like a mountain goat – he can climb up steep inclines without pause; I’m huffing and puffing, with my heart pounding and legs cramping. I take breaks and work through it and eventually it gets easier, but there’s work to be done.

Still, there are plenty of day-trippers in the Grand Canyon, and if a few hours is all the time you have, you can begin by visiting the Desert View Watchtower on the eastern edge of the park. This was designed by famous architect Mary Colter, as well as a number of other buildings within the park. She chose to build it “in the Indian spirit”, based on many examples of Indian architecture she had admired. It is possible to walk up to the top for a better view of the canyon. 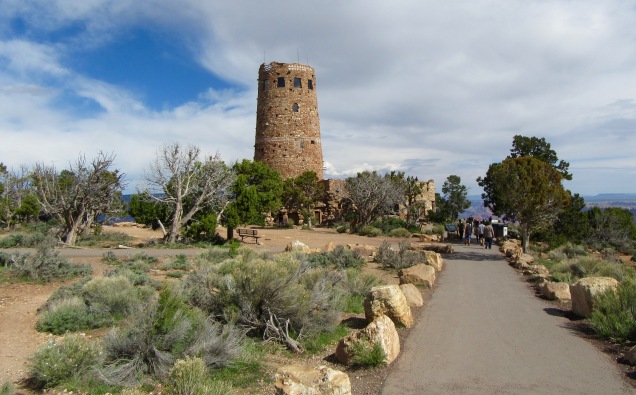 Our very first glimpse of the Grand Canyon. It choked us up. 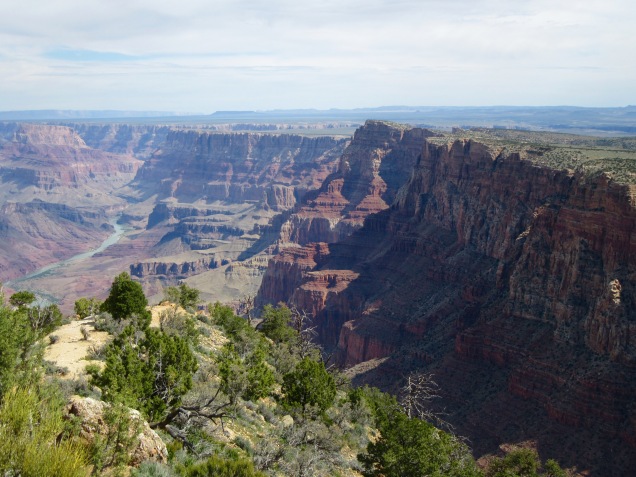 There are dozens of hikes within the Park – from easy 2-3 hour hikes to very strenuous multi-day hikes. However the 14-mile Rim hike, which follows right along the top of the canyon, and is quite flat and fully paved, is where every tourist sooner or later ends up. It is a linear hike, but can be done in segments and there is no such thing as a bad view.
We were on the South Rim, by the way, which is by far the busiest part of the Grand Canyon. The North Rim does not open until May.

Although we were there on Easter weekend, it was not nearly as crazy as we had feared. It was busy,  but bearable, although at times we had to wait for a space to clear to snap a photo, as cameras were in overdrive, capturing their loved ones from every imaginable angle.  My favourite.

Every year people fall to their death at the Grand Canyon and sadly sometimes it is because they have taken a foolish risk to capture that Instagram-able moment.

These three young people were much closer to the edge before I snapped this shot. One of them had been sitting with her legs dangling over the side, looking backward for a photo. It took my breath away. 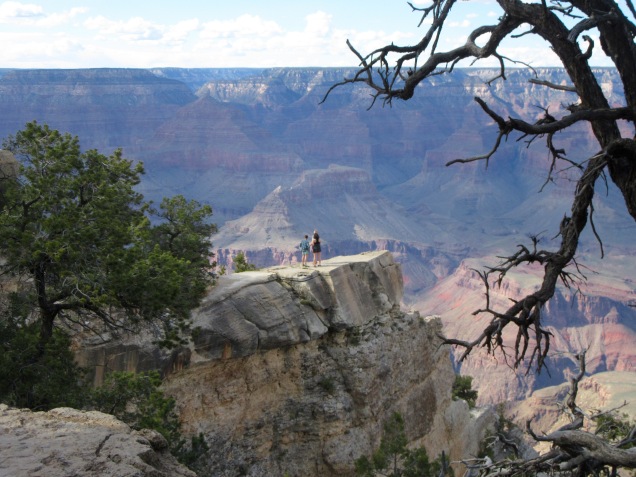 But these two young women actually drew a horrified crowd. We watched while they posed and stretched backwards, just inches from the edge; clinging to one another like death-defying contortionists.
Are they “influencers” – that strange new breed of media stars who must always seek a better photo, a bigger thrill? 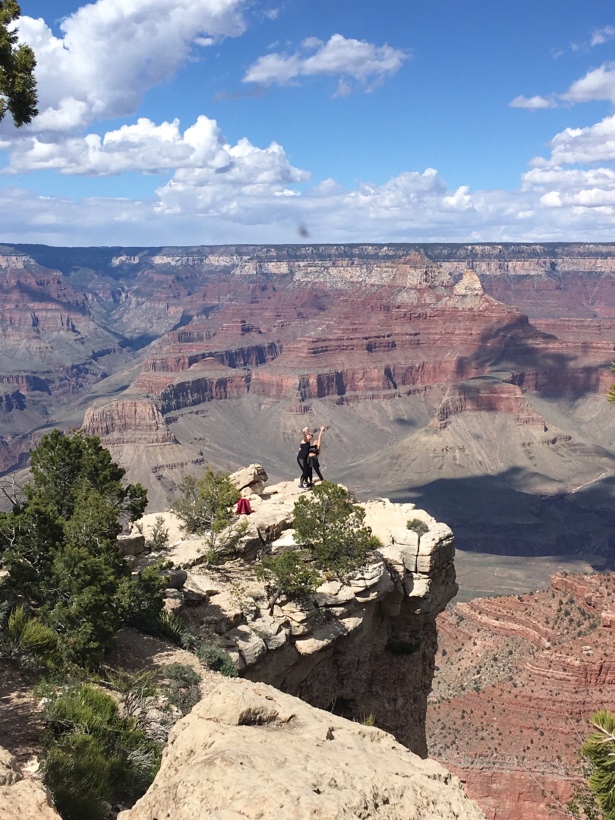 We took one  three-hour hike down into the canyon, but not before reading the stern warnings about the potential hazards, especially between May and September, when canyon temperatures reach the 100’s.

Many hikers have to be rescued and every year there are fatalities related to heat and/or dehydration. Hikers are either poorly prepared, run out of water or underestimate the power of the intense sun and heat. Each year over 600 assists are required in the Canyon and over 150 helicopter rescues take place.

At a number of strategic locations, there are free water filling stations; a much-appreciated service, even for casual walkers.

We chose the popular Bright Angel Trailhead; it offers several hikes and we went for one that lasted about  three hours. 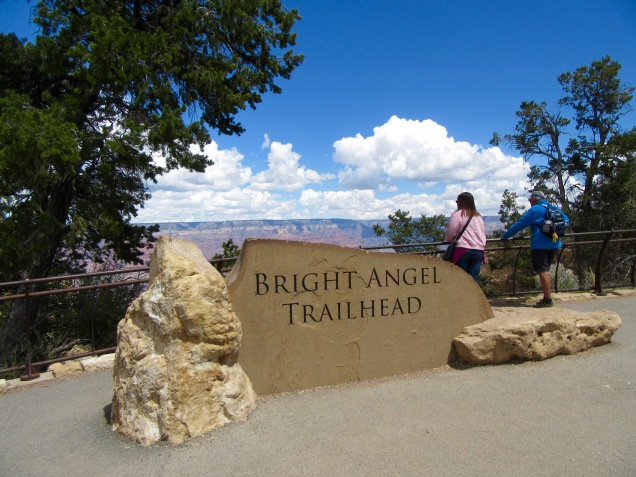 We descended about 1200 feet, which is a whole lot easier going down. However, we met up with a mother and son, who were concluding their 2-day, overnight hike from the south. They had camped in the rustic campground below and rose at 4:00 am to make their final hike back up. They were tired and hungry and looking forward to ice-cream!

The trail is narrow in spots, but very well-graded and easy to walk. It was still early in the day when we hiked down, so most people we ran into were in quite cheery moods.

Our little beacon on the trail – called Resthouse 1.5 – restrooms, a bit of shade and time to contemplate the long hike back – uphill.

A view from another part of the Rim 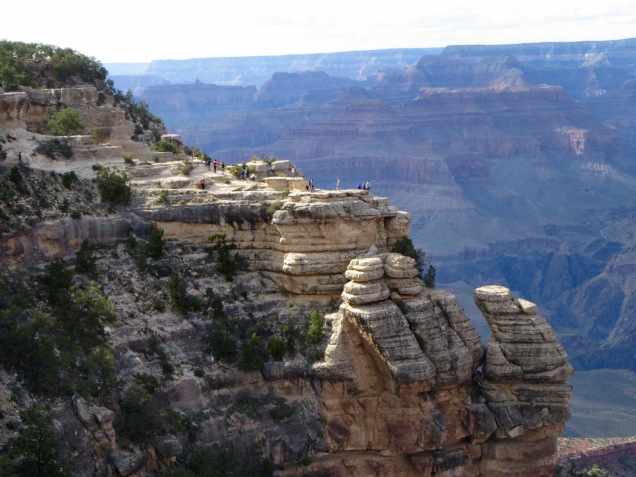 It’s not all about the hiking – there is quite a rich history here. The Village of Grand Canyon has about 1500 residents, swelling to 3000 in the summer. They are all park employees, and their work revolves around the various lodges, restaurants, gift shops, services and amenities that the village and the visitor centre and the market offer.

Most of the original buildings are intact and well maintained, such as the Mary Colter-designed El Tovar hotel: 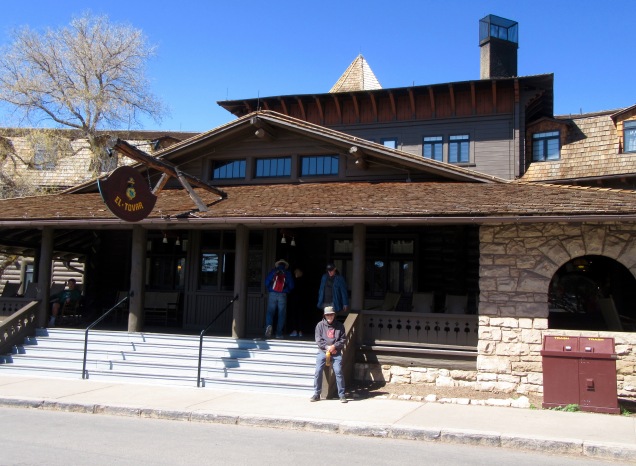 The Kolb Studio was the photography studio of the quirky and daring Kolb brothers, who began working in 1904 and became famous for their photos of visitors on mule rides.

They were avid outdoorsmen and went to great (some said foolish) lengths to capture a shot.

When trains began arriving in the Grand Canyon, they brought the first intrepid tourists and once the depot opened in 1910, a community began to develop.

Train travel was very popular until the road from Williams was paved and tourists chose to travel by automobile. This depot closed in 1968, and only resumed again in 1989 when a clever marketer devised a package using a vintage train that included singing cowboys a Wild West shootout in Williams and a mock train robbery. Trains run twice daily and take two and a half hours, combining breathtaking scenery and corny, fun entertainment.

The Grand Canyon was so much more than we had hoped for.  We only scratched the surface of what there is to do and see here, so it has been added to our “Must-return” list.

We waited this long to see it, which is less than a blink in its geological timeframe. This is an example of one of the oldest rocks in this area.

From the Grand Canyon to Las Vegas – we are letting ourselves down gently! We will be back in British Columbia in about a week.

10 thoughts on “The Grand Finale”