Well, we had been hoping to see grizzly bears (from a safe distance), but when our park ranger dropped by to let us know a grizzly had been sighted a couple of kilometres away, that distance suddenly felt a little too close to home.  Doesn’t a campground count as a reliable food source?

We’ve now been in the Yukon for a week and have camped and hiked without incident, so we’re going with the ranger’s assurance that “you probably won’t see one while you’re here.”

We are currently in the Southern Lakes region, which is explained better by this interpretive display. These long, narrow finger lakes are ringed by mountains and forest – the whole area is absolutely stunning. 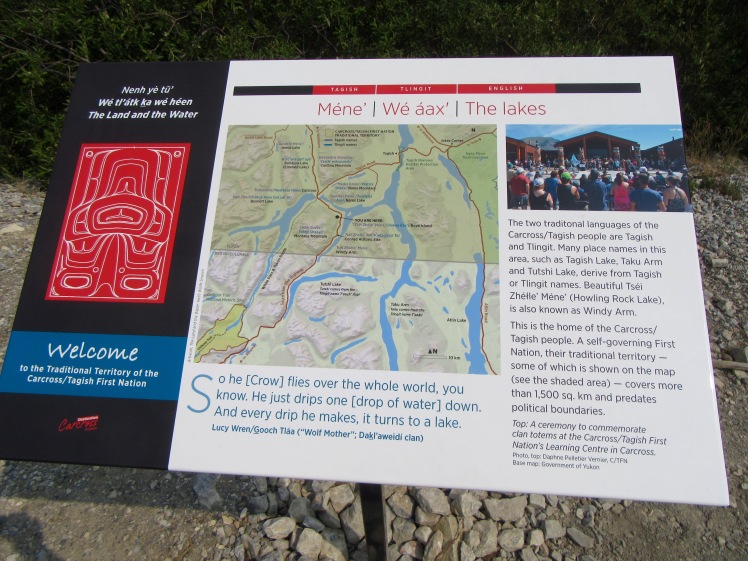 We spent one night camping near Teslin, a small community of 500 that was a former Hudson’s Bay trading post and is home to the Tlingit (pronounced Klink-it) people. We visited the George Johnston Museum, named after the Tlingit elder, trapper, fur trader, entrepreneur and photographer who helped to define this area during the first half of the 20th century. 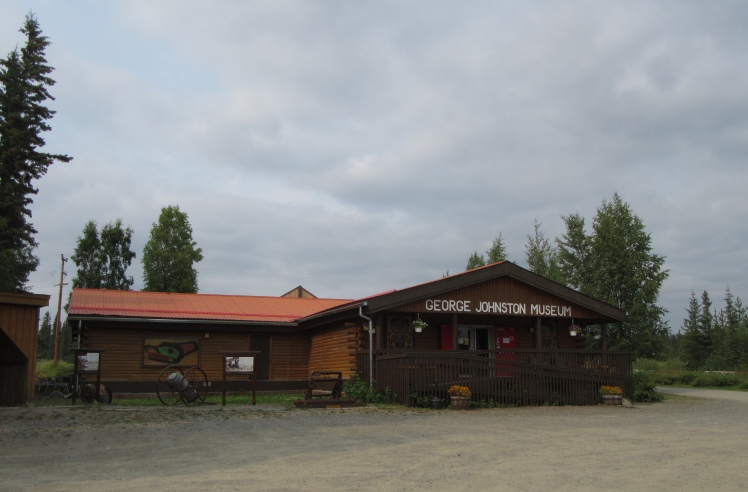 His photographs chronicle the many changes that occurred from the turn of the century up to WWII and the building of the Alaska Highway. 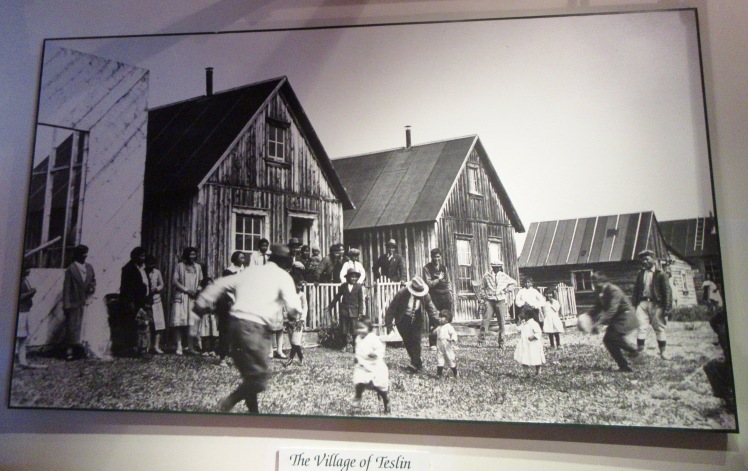 The Teslin Tlingit Heritage Centre was another compelling stop; its impressive building lined with totems of the five Tlingit clans.

Local resident Mabel Johnson lived across the street from the RCMP detachment, and in 1973, when Constable Warren McDonald was transferred to Teslin, she began to design a beaded vest for him.

When McDonald discovered this, he was very interested in buying the vest, but the shy Mrs. Johnson was not sure. She wanted to enter it in a contest (for which she won first prize), and after that, McDonald was not only able to buy the vest, but also commissioned her to make the mukluks; both on display at the Heritage Centre.

The RCMP tend to have more amicable relationships with the residents of the towns and villages of the Yukon than perhaps in more populated areas further south. This kind of policing requires a deft hand and a strong sense of community. But… the police can’t be everywhere at once. Sometimes a little decoy action is required. 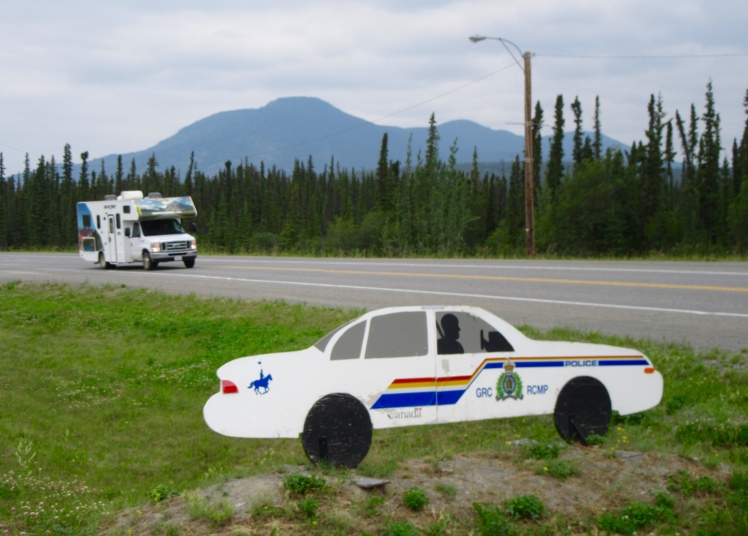 Part of the Heritage Centre display included a number of dugout canoes. 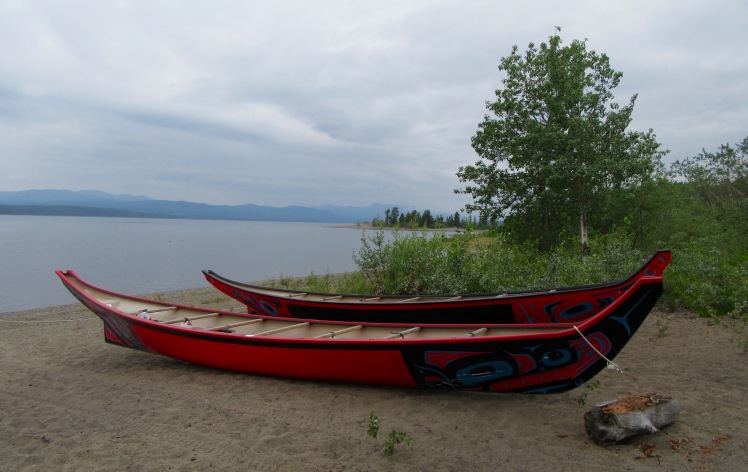 Our next stop: Carcross, formerly  known as Caribou Crossing. 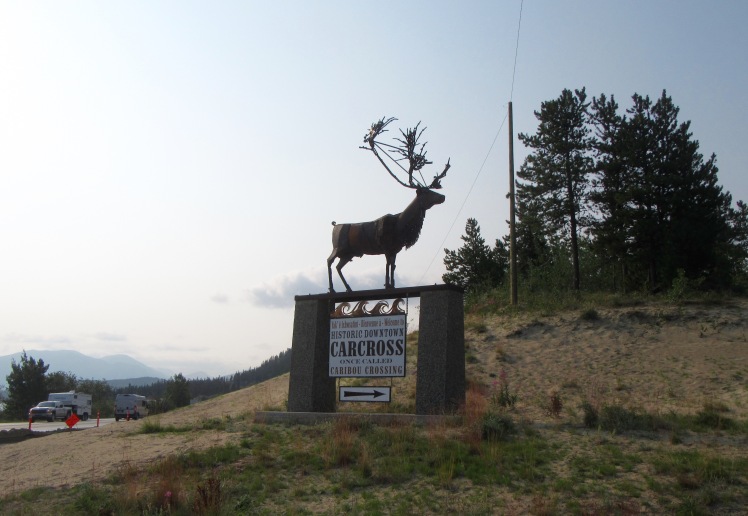 In the Tagish language, Carcross’ traditional name means ” wind blowing all the time”, which is an apt description. Our campground, about 15 km out of town, was located on Windy Arm of Tagish Lake. It was one of the prettiest campgrounds we’ve stayed at so far and the windiest ( upside – no bugs!). This is the site we would have stayed at, but this woman beat us to it – one of a dozen coveted lakeside sites. The pink flowers in the foreground are fireweed – the Yukon flower that grows everywhere and adds big punches of colour along the highways.

The Yukon has really figured out the camping situation – their campgrounds are $12 a night, first-come, first-served, and offer free firewood. Most of the sites are well treed and private, which adds so much to the camping experience. We go to town for showers, laundry, wifi, water and sani-dump. By contrast, many private RV parks offer full hook ups, but little else – they are usually just big gravel lots.

This campground had an amazing children’s playground, complete with pint-sized zip line. There were a few kids playing on the zip-line, but they handed it over for us to try. “My grandpa went on it,” was all the encouragement we needed. Here is the video evidence!

The Yukon also offers incredible Visitor’s Centres and the one at Carcross is a hub of the Carcross Commons, a collection of shops, restaurants, an excellent cafe and art gallery.

The town of Carcross is small and picturesque, with  a number of attractions, including Bennett Beach, described as “one of the best beaches in Canada“.

We took a walking tour of the town, and it soon became apparent that the Yukon was not built by sissies. They’re kidding…right? 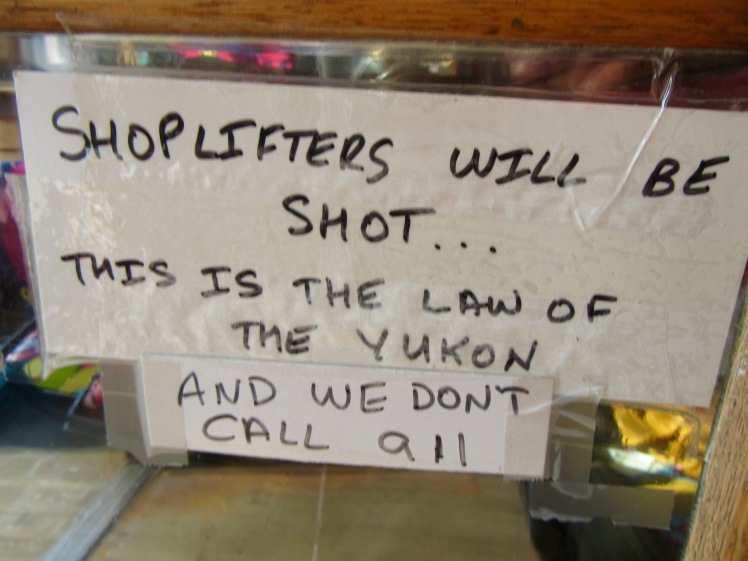 We spoke to the  rather grumpy owner of Matthew Watson General Store (where the above sign is posted), and he seemed like he might just have a rifle stashed behind the counter. Since we had no intention of grabbing the five-finger discount, we felt safe enough to browse around. The store is a combination museum/general store, with both old jars on display and souvenirs for sale. Hunting, fishing and trapping are very much a way of life up north  and among the coffee mugs, beaded moccasins and T-shirts,there were fur pelts for sale.

Further down the street, an art gallery had this pelt on display – $3000 for a timber wolf.
We walked around and looked at it from all sides, and I swear this looks like a bear – the head (snout and ears) and paws seem too big for a wolf – I think of wolves as being rangy and lithe, with narrow heads and dog-like paws. Maybe it’s a hybrid. 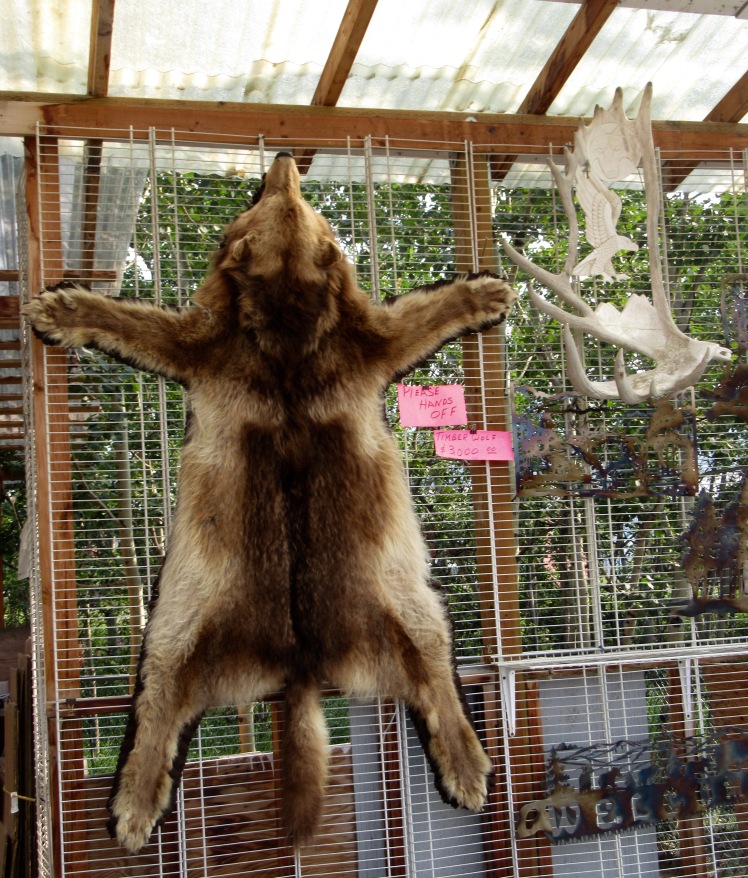 Many of the Carcross houses were built at the turn of the 20th century ; most of them are low log cabins and most of them giving the current trend for tiny homes a run for their money.

This one was built by Arne Ormen, a tall Scandinavian woodcutter who, for reasons known only to himself, built a cabin too small to stand up in. 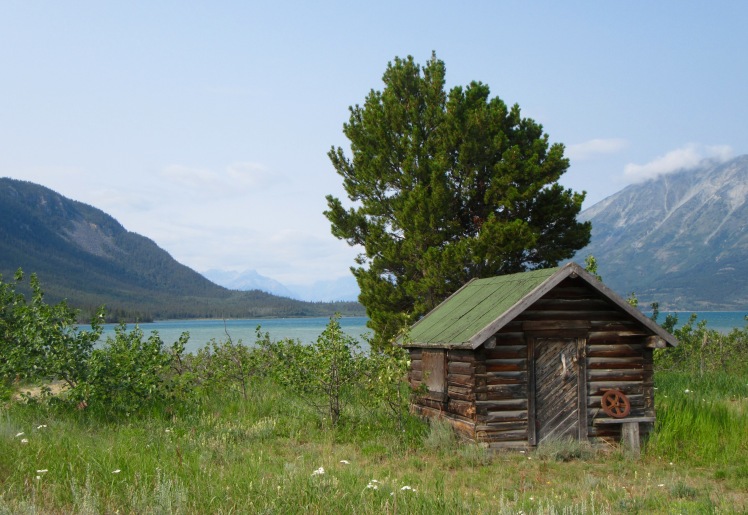 The Watson cabin , which does not look especially conducive to romance, was rumoured to have once been a brothel.  The 1950s pickup parked beside it belonged to the owner’s grandfather.

This cute little cabin operates as a seasonal residence.

We wondered about this one – the tiny log cabin with a front wall buckling with age and topped with five birdhouses modelled after significant local buildings.
No-one could accuse Yukoners of lacking independent spirit and subversive humour. 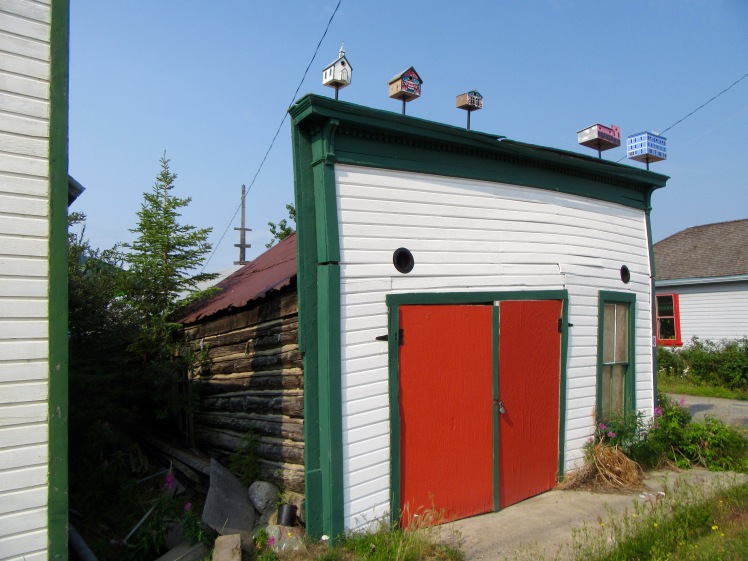 We asked about this sign. It is no secret that alcohol plays a tragic role in the lives of many northerners. In Watson Lake, there were signs posted in many establishments in town, with Zero Tolerance above a cartoonish image of an inebriated man.  In Carcross, this sign was posted just outside town, warning individuals that drunkenness would not be tolerated within town limits. 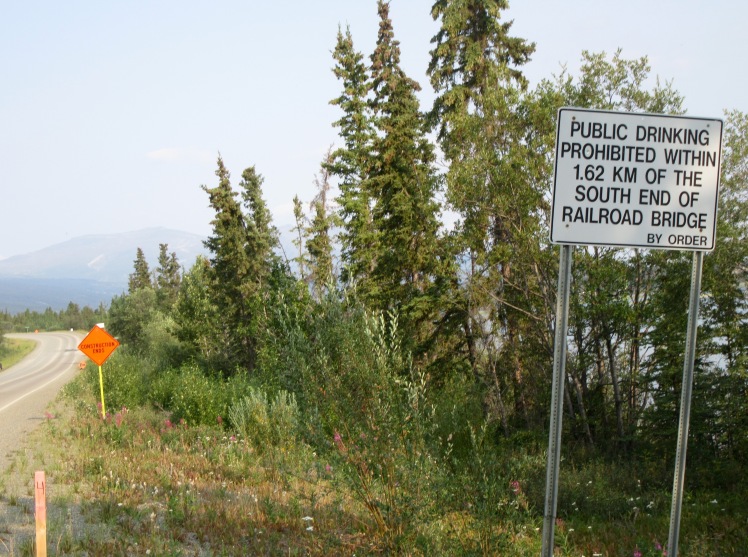 We had no intention go crossing over into Alaska on this trip, but when we discovered that Skagway was just an hour’s drive from Carcross, we decided to check it out. The scenery alone was well worth the trip.

Our friendly border guard settled a disagreement about these posts. They are there for winter driving; the tips help motorist determine where the side of the road is when shoulders and  guardrails are covered in many feet of snow. 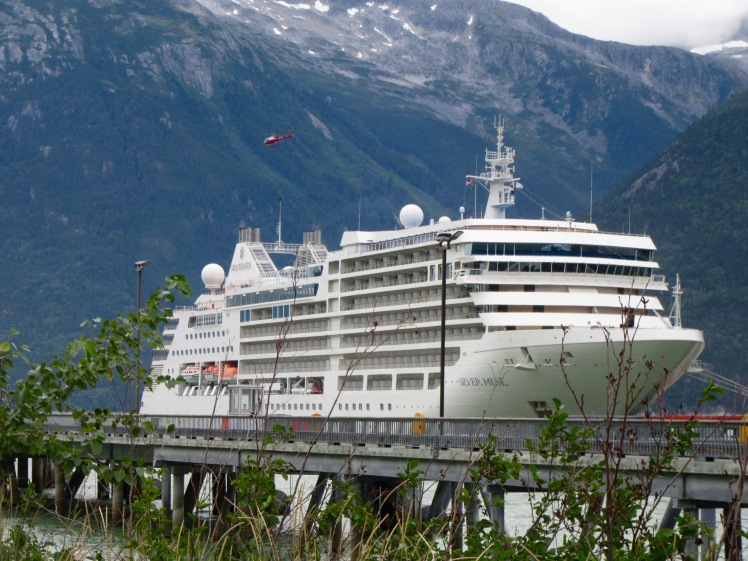 We did not get the feeling we were in the real Alaska. Skagway is a town with some very pretty buildings in a gorgeous natural setting, but we wondered what it would look like without the dozens of jewellery shops and overpriced restaurants. If the tourists all left, what would be the reason to visit?

Along with the diamonds and tanzanite and intricate design pieces, many of the shops sold jewellery and carvings made from fossilized wooly mammoth. Yes, the same wooly mammoth that no longer roams the earth. How could this be? We made discreet inquiries at a visitor centre – was the use of wooly mammoth akin to bear bladders or elephant ivory or shark fins? Apparently not. 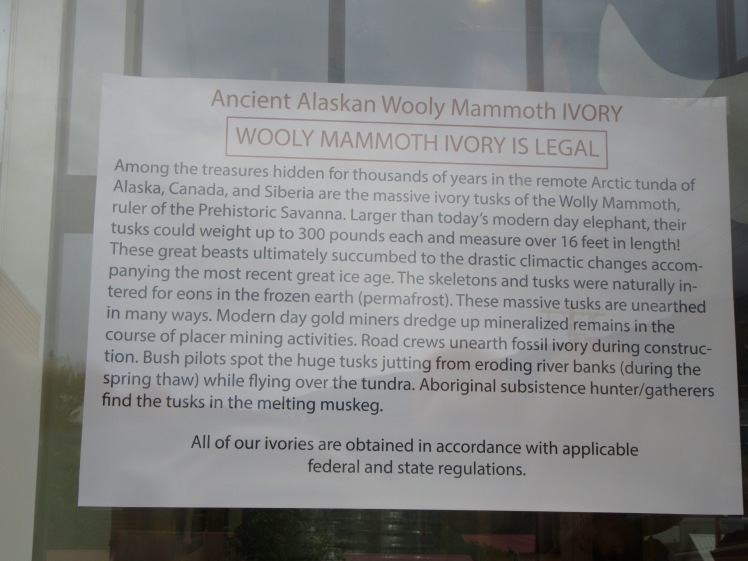 We left Skagway with a bit of a sour taste – it was less about the history and more about the shopping.  The Yukon is rough and tumble and wild. You might be hard-pressed to find good coffee. You might be hard-pressed to find food, period. Carcross residents have to drive an hour to Whitehorse to shop for groceries. We like that – the Yukoners want our tourist dollars but on their terms.

On to Whitehorse and surrounding area.

5 thoughts on “Camping with the grizzlies”