We were on a don’t-miss-it pilgrimage to one of the world’s greatest (and most-visited) sites, armed with some preconceived notions that had been reinforced by fellow travellers.   Many tourists skip the rest of Cambodia entirely, and hop over from Thailand or Vietnam to fit in their requisite one-to-three-day visit to Angkor Wat. 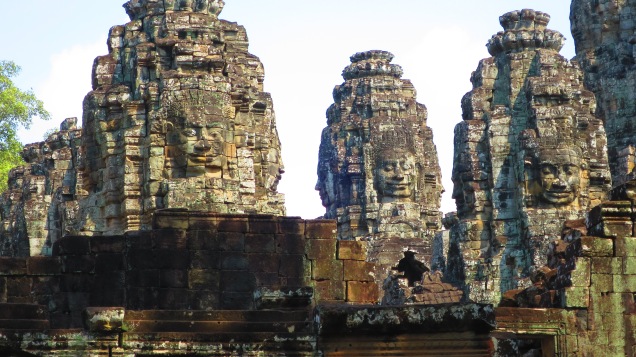 In 1993 there were 7,650 visitors to Angkor Wat. Numbers for 2016 came in at just under 2.2 million visitors. The 400-sq.km. Angkor Wat Archaeological Park has become so saturated with tourists that many articles have been written advising on “best times to beat the crowds.” (Hint: at lunchtime, when everyone else is eating, but the noonday heat is enough to drive you mad).

There are many factors having a negative impact on this “bucket list” site. The structures are being weakened by the millions of footsteps that climb their sandstone steps and run their hands over their bas-relief carvings. The government is in discussion as to how to protect this priceless national treasure and control tourist visits in a sustainable way. It’s complicated.

We began our day at 8:00 a.m. and carried through to 3:30 p.m. We were picked up at our hotel by our tuk-tuk driver, Totiha (s?) He was with us for the entire day, taking us from temple to temple. All the tuk-tuks look like this – like little chariots – pulled on two wheels behind a motorcycle. They feel tippy but are remarkably maneuverable, and the biggest bonus for us was the fabulous cooling breeze we experienced after each scorching temple visit. 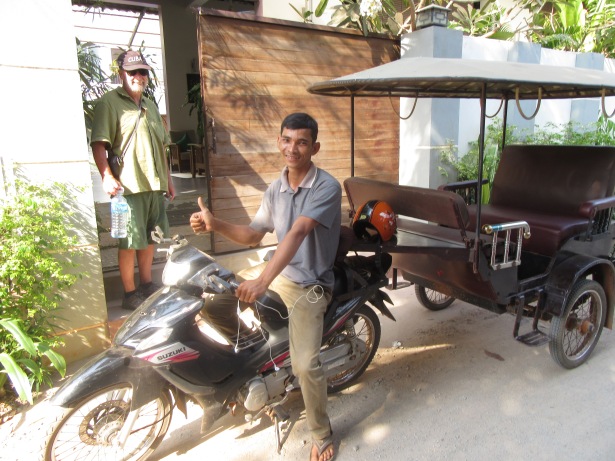 Angkor Wat is just outside Siem Reap. After our hectic ride through the city, we landed on a long stretch of road leading to the temple complex. It was our first glimpse of the immense scope of the park.

The surrounding acreage is peaceful and atmospheric – jungle coming right up to the sites and wide lakes to cool things down a bit. 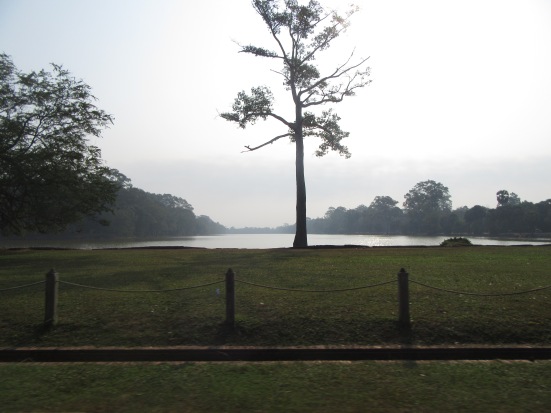 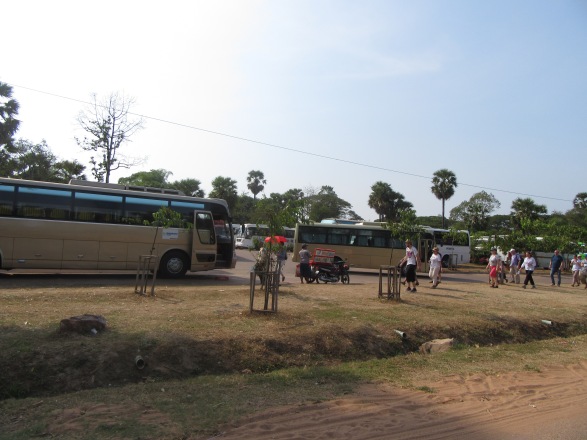 There were easily 100 tour buses – maybe 150, each with a capacity of 50 passengers. There were dozens of mini-vans. Tuk-tuks – too many to count. Motorcycles and scooters – well, you know already how many;  a few die-hard souls even rode bicycles.

I’m not a big fan of crowds and as we made our way through the throngs at the ticket booth, I felt quite crestfallen. We had skipped the sunrise start – were we already too late?  However, they’ve got the system down pat – we had our photos taken, passes printed and were back on our tuk-tuk within 10 minutes.

Before I go any further, may I tell you about the newly strict dress code at Angkor Wat. Since a percentage of the population does not understand the meaning of “skimpy attire”, and since another percentage of the population thought taking topless selfies of themselves in temples was a good idea (???), administration cracked down. Code of Conducts sheets are posted everywhere, and on many temples, women must cover their shoulders and their legs to be admitted.

For my temple visit I had chosen a light airy dress that hits below my knees, and planned on bringing a shawl to cover my shoulders when necessary. Our hotel manager told me that dresses and skirts were not allowed – I must wear pants, and a top with sleeves. While this information did not match with my research, I complied and went to the market to find a comfortable top. If you promise not to laugh, I will show you the result of my cobbled together outfit. We call the look “Travels with my fashion-victim aunt.” 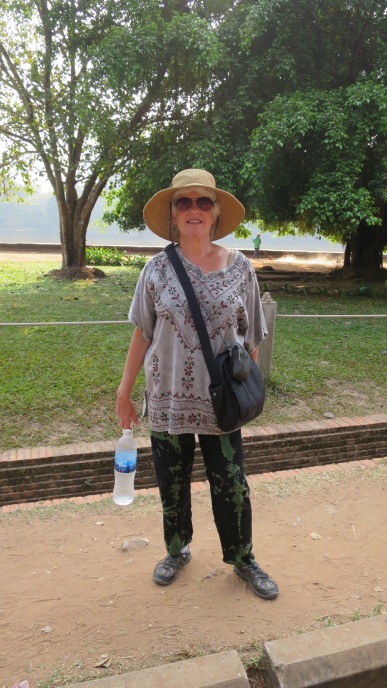 I bought the top in a hurry. This is what happens when one walks through a hot, sweaty market and harassed by market vendors to the point of distraction.

But the crushing blow is this – Angkor Wat was awash in tank tops, shorts, dresses, bra straps – I could have worn my respectable little dress and felt a lot more presentable.

Anyway…on to the main event. We began with the most important, most iconic temple, Angkor Wat.The entrance is as dramatic as every  photo you’ve ever seen, but the size and scope has to be seen in person. It is staggering and deeply moving.The outer walls stretch for 1.5 kilometres and are encircled by a moat. You cross a long bridge and walkway to approach the temple; as is fitting for a temple of its importance. It stands back and gives you plenty of lead time to admire. 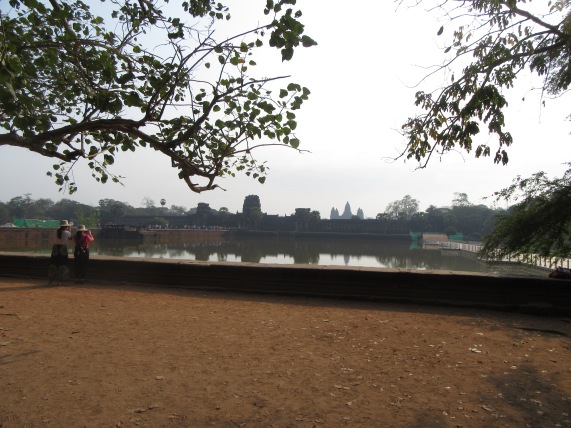 The distinctive lotus-shaped spires set Angkor Wat apart from the others. 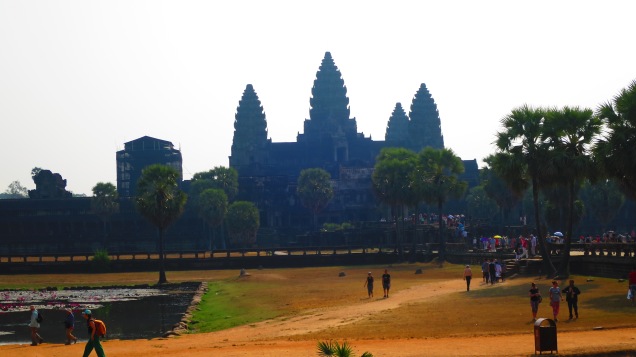 As we walked through the main entrance and came out the other side, a balloon was just rising over the structure. 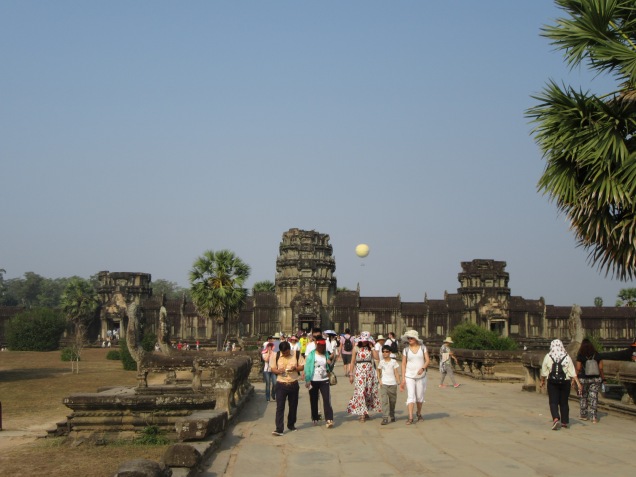 I won’t go into great detail about the history of Angkor Wat – that is all easily and comprehensively available elsewhere. But of all the temples, Angkor Wat was never entirely abandoned and forgotten – it has always functioned as a place of Buddhist worship. 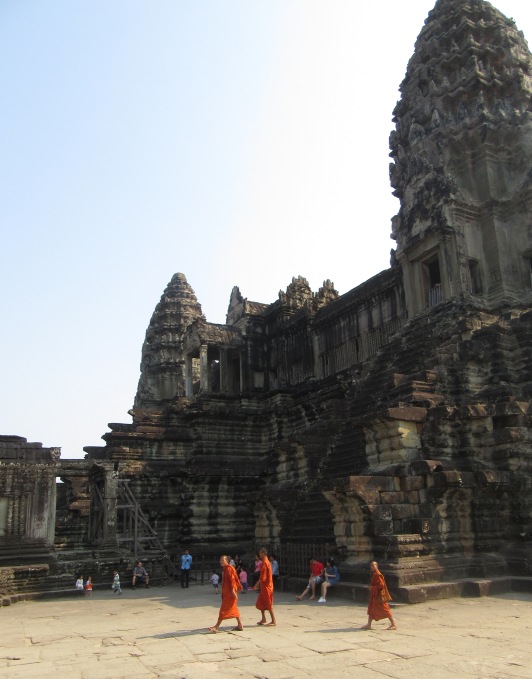 We expected the greatest crowds at Angkor Wat and there were times when things got a bit congested, but the site is so enormous that we frequently found ourselves all alone.
Visiting important ruins always elicits the same response with us – we are flummoxed by the effort required to build such spectacular structures, in ancient times, before modern tools were available. In this case, sandstone was quarried 50 kilometres away and floated downriver on rafts. It took 300,000 workers and 6000 elephants to complete. It was a pleasure to sit and take it all in. 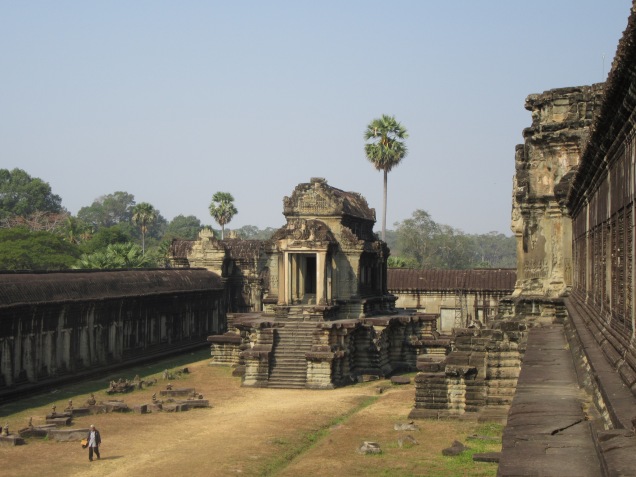 It is a reality check to be a tiny human speck, surrounded by massive stone structures. So many people walked this way before us, and so many will follow when we’re gone. What was this room? We’re imagining a giant swimming pool.
One disappointment about Angkor Wat was the dearth of signage. It would have been so helpful to have information to digest as we went along. I would highly recommend hiring a guide for the day – we “poached” a few times – pretending to take photos as we stopped to listen. 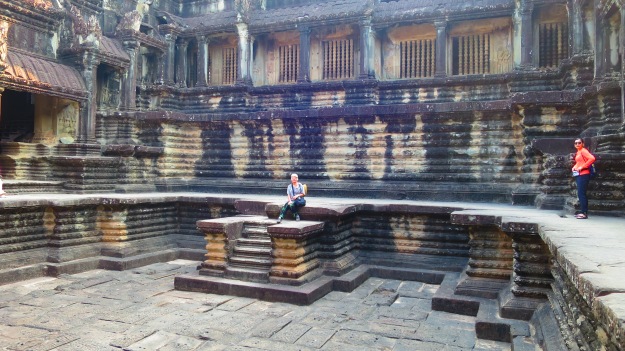 Our next stop was Ta Prohm, the temples that are being slowly and photogenically swallowed up by the vast octopus arms of massive trees –  silk cotton trees and the aptly named strangler figs. Much of the complex has been propped with steel supports, but the jungle appears to be winning. This was my favourite of all the complexes.

Stephen propped up at the roots of one of the trees. 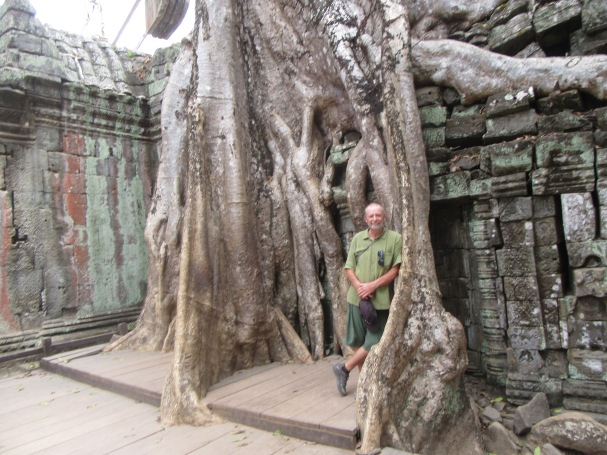 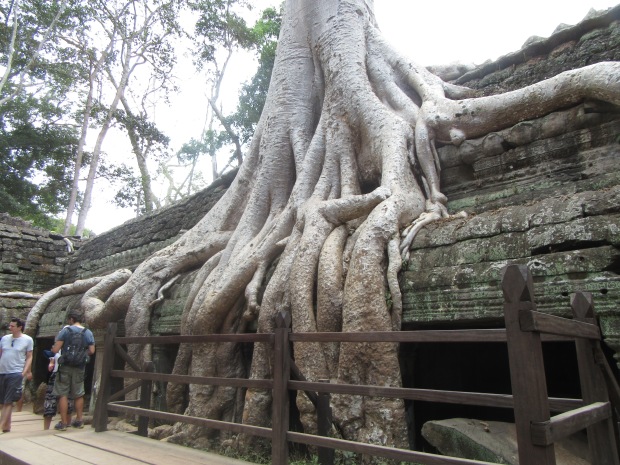 We fell into a sly vendor trap when we landed at a nearby temple where Tomb Raider was filmed. As we walked through, a friendly young man offered to show us the “exact  spot where the Tomb Raider poster was photographed.” We followed through and got our money shot. 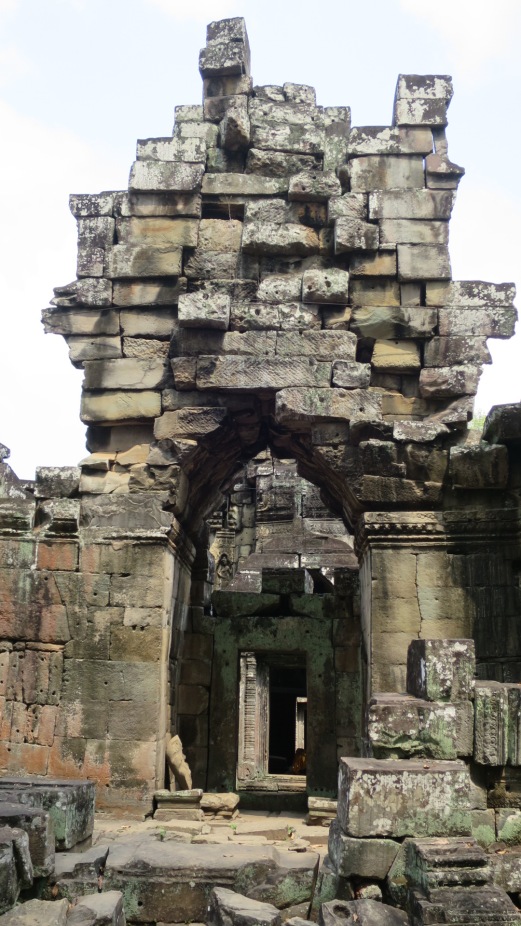 He kept following us, pointing out various things and it became awkward and apparent that he was after money. After 10 or 15 minutes, we thanked him and he asked for money in Thai baht! We gave him $5US, and he asked for $10, and at that point we politely parted company, feeling both naive and bit annoyed.

We visited a number of other temples, but as you are probably already feeling it – we were experiencing temple fatigue. Our last big temple – Bayon, in the middle of huge Angkor Thom – was the most surreal in every way.

The main feature of Bayon is 216 massive smiling faces that stare at you from every angle – they are strangely lifelike and powerful. 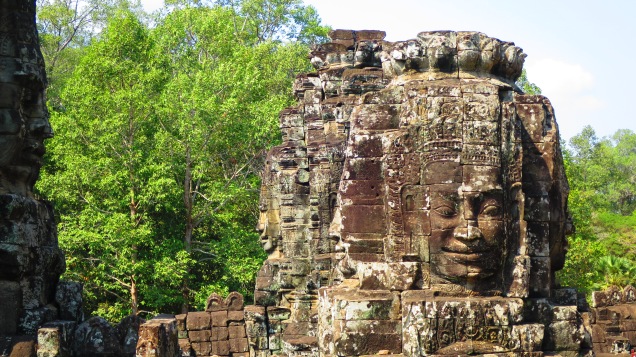 We would have spent a lot more time wandering through, and examining the bas-reliefs that cover the outer walls, but for this obstacle course. 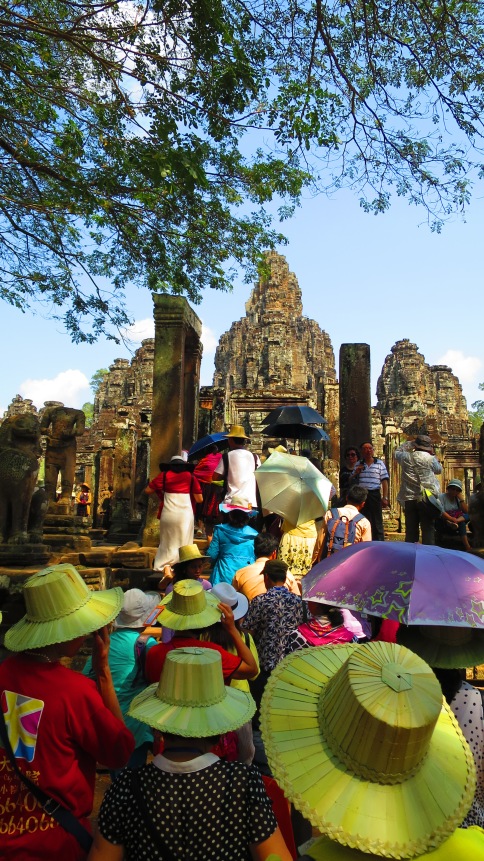 Busloads of tourists had arrived, and there was nothing to do but follow the queue, and hope for a breather somewhere. Alas, it was not to be found.

I have to come to terms with selfies, they are here to stay. But there is a uniquely Asian twist to selfies that I’ve never seen anywhere else – they are choreographed and posed endlessly.

We watched this woman strike this pose in front of a statue, and hold it for numerous takes. Then… just as we were about to try and grab our own shot, another woman took her place, and struck the exact pose. It became apparent that we were unable to get our shot, so we left. 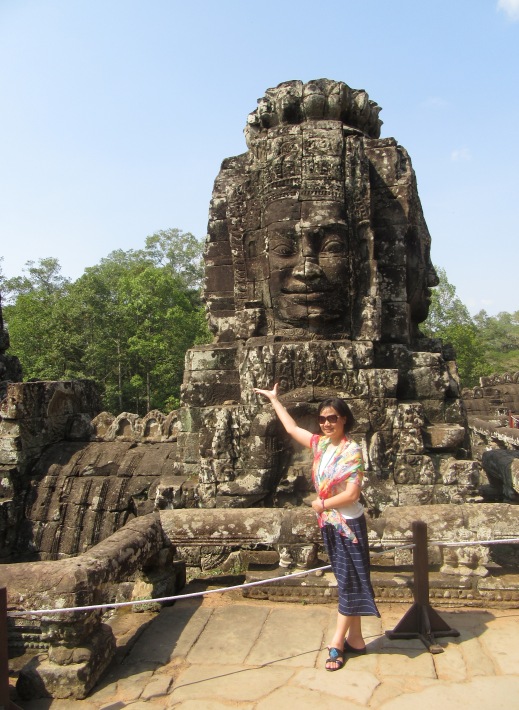 Our final thoughts of our day at Angkor Wat and surrounding temples? Yes, it is crowded a lot of the time, but it is also possible to find your own quiet place to take it all in.

Trying to do it all in one day might have been a mistake, but we didn’t have the stamina to spread it out over two or three days.

The vendors are relentless – selling everything from guide books to scarves to elephant pants to artifacts, they are in your face in a really unpleasant and aggressive way.

It is hot – really, really hot, and there is very little shade. You need a broad hat, sunscreen and buckets of water to get through a day here.

There are lots of uneven stairs to climb, which require a  level of  attention and determination. I took a pass on two of them – I was so overheated at the time, but Stephen took them all on.

We wholeheartedly enjoyed our day, in spite of the discomforts and annoyances. We are at least a decade too late to see Angkor Wat the way it could be properly visited, but that is the way of many of the world’s top sites. That is not a reason not to go.

We left the park with this final serene memory. 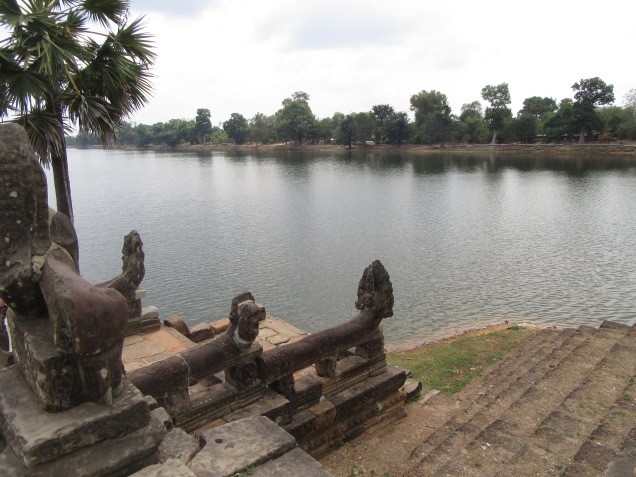 23 thoughts on “Overwhelmed in Angkor Wat”