While Siem Reap provides food, water and shelter for the temple hordes, it is very much a stand-alone city that deserves its own attention. It has a naturally pretty setting with a mopey tree-lined river that runs through the city and leafy streets filled with stately old buildings. 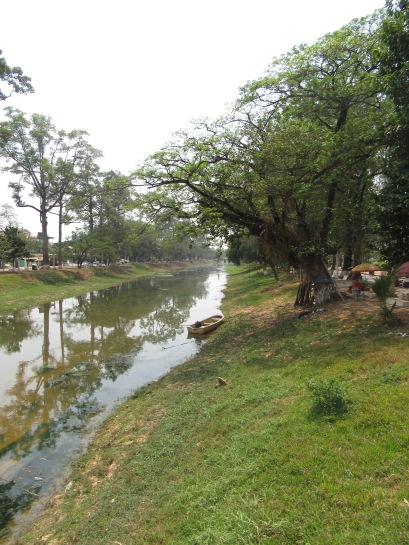 It is undergoing a renaissance right now – you can feel the buzz of that perfect blend of historical charm and fresh energy. However, old and new and rich and poor exist side by side; Siem Reap is a long way from being gentrified. 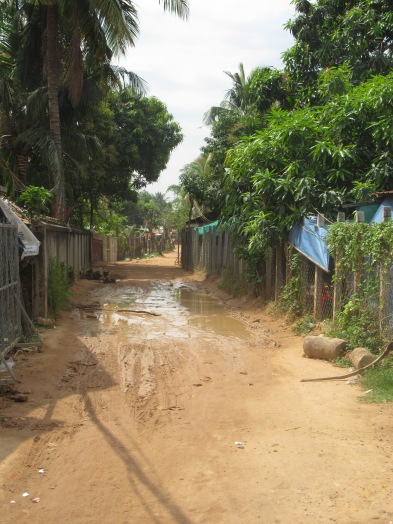 As we were driving down a desolate, garbage-strewn lane toward our hotel, my heart sank. Is this where we would be staying for the next six nights? 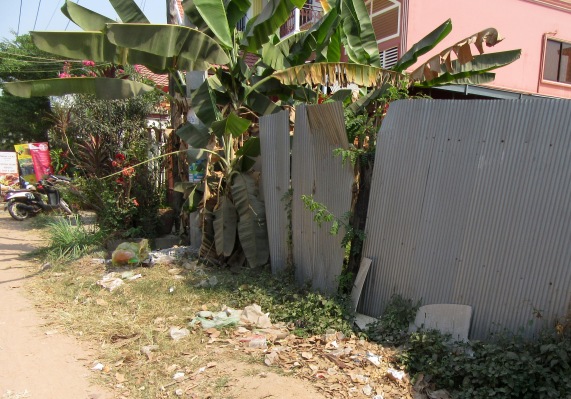 But no, we stepped out of the heat and dirt and into a frangipani-scented oasis. We were greeted with cold facecloths and glasses of pineapple juice by Ratanak, Ban Rang and Sopheak. They were the first Cambodians we met and they’re quite typical of everyone we’ve encountered since – gracious, helpful and genuine. 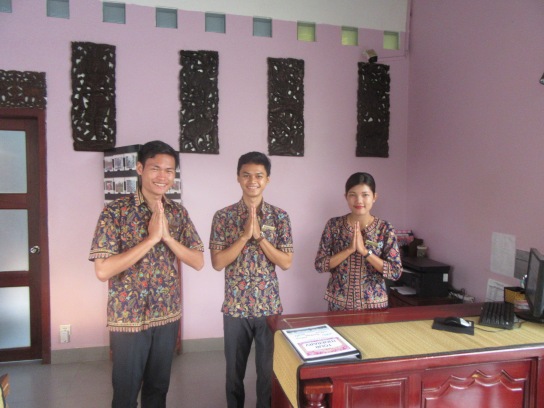 Straight ahead lay the pool. 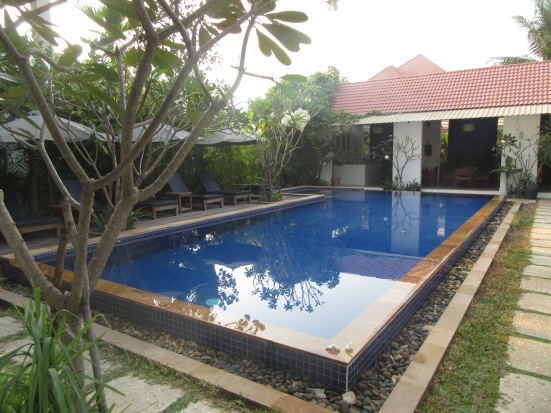 Our room – spacious, cool, white linens, dark wood, a balcony. Our bathroom – a separate shower, quality toiletries and a first on the trip so far – a huge, stone tub. Hot water, excellent wifi, breakfast included – just 8 units – very quiet – all for less than $40 a night. Bingo! Sometimes we win the hotel lottery and in Siem Reap it is easy – high-quality boutique guesthouses are in abundance and very affordable.

If you want to splash out a bit, there are a growing number of very high-end properties, including Sofitel, Le Meridien, the famous Raffles, and my favourite, Victoria Angkor. 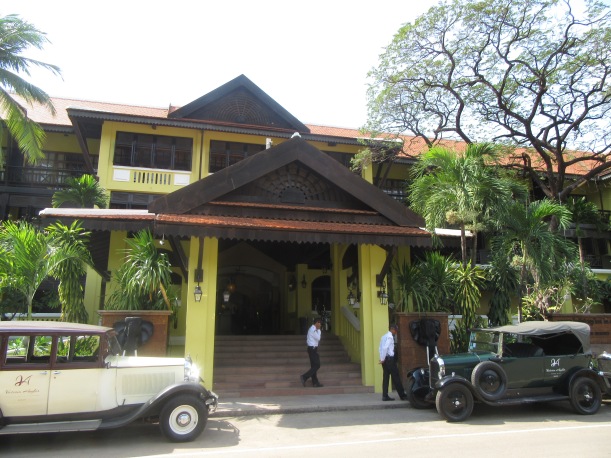 We walked through a couple of these dream hotels (Stephen a little reluctantly), and the staff were exceptionally kind. I rather needlessly pointed out that we were not hotel guests and they maintained their poised and professional demeanor and were positively welcoming.  We even got cold scented facecloths! This property is fashioned after the French Indochina period, and there is not one detail they haven’t looked after. Room rates run about $200 a night, which would be worth every penny. This is their pool area. 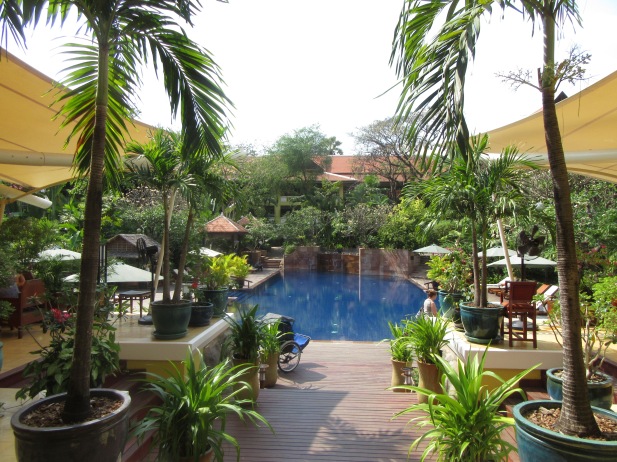 Siem Reap is very walkable, but considering the extreme heat, we took each day slowly, and found reasons to go into air-conditioned stores just to cool off. Grabbing a tuk-tuk is another option, as they are just $2 a ride to most places. While there are nice residential pockets in Siem Reap, we didn’t see any gated communities or enclaves – opposite ends of the economic spectrum can be found on one street. I stepped inside the front yard to take a photo of this stately building, and then realized it was a private home. 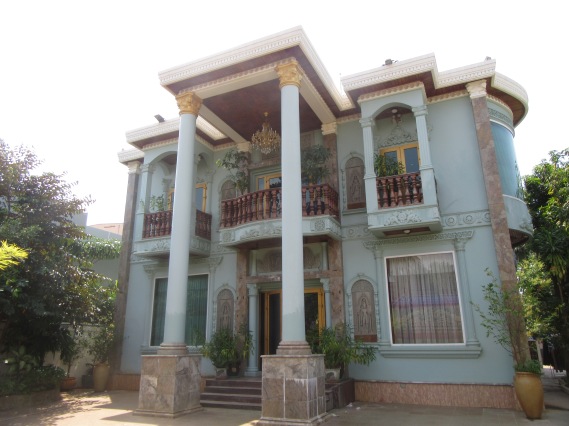 Just down the same street, we found this colourful scene. Almost no-one uses dryers here. When you drop off your laundry, you want to be sure your undies are in good shape – they will be hanging out on a clothesline for all the world to see. 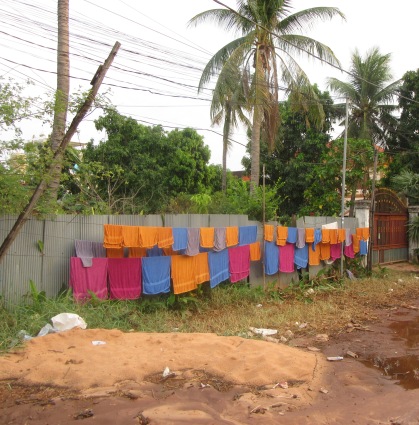 Going to the market is an endurance test as I found out while trying to buy my Angkor Wat top. First of all, we walked about 15 or 20 minutes to cross the river and get to the market. By then, we were “glowing.” We stepped inside the tented market and were besieged by vendors. “Hello Madam, I have nice dress for you. What colour you like? I have all sizes. Special morning discount for you, madam. I have t-shirts, I have scarves.” When I tried to protest that I really just needed to have a look first, they were absolutely undaunted. “Over here, madam, I have jewellery, special price. You need shoes?” If I so much as looked at anything, the onslaught ramped up. They were calling out from half a dozen stalls. By then, I was sweating profusely.

Cambodia uses U.S. dollars as their preferred currency – any transaction larger than a popsicle will be quoted in US dollars.Their riel are 4000 to $1US, and you will receive riel back as small change.

We managed to work our way through one stall long enough to buy Stephen a pair of nylon Colombia convertible pants for $30 and were working on an Underarmour shirt for $8US, but the sales pressure was so great, that we stuck with the pants only. The vendor reverted back to Khmer (I’m quite sure she was swearing at us).  This is not our game – it’s exhausting. We keep imagining our son Dan here – he’d be in heaven.

The rest of the market area (known as Pub Street) is where the majority of tourists find themselves for shopping, cafes, restaurants and bars. There is a mix of same-same vendors with a few nicer stores – well worth a visit. 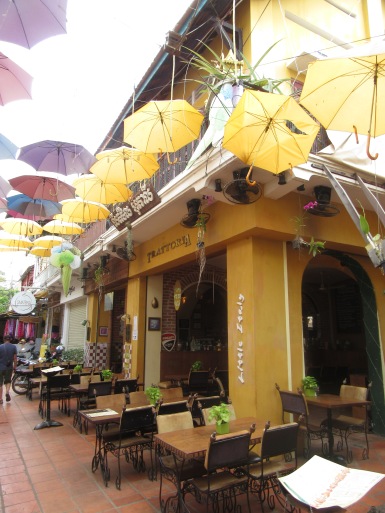 The traffic is hectic – although nowhere near on a par with bigger cities – we’re waiting to see how we fare in Phnom Penh. We still have not been able to figure out the right-of-way.  As you watch this video, let us know if you see a pattern emerging.

We walked past this construction site this morning – another old building undergoing a complete re-do. “Safety First” signs are prominent all over town, including here, where we figured perhaps the foreman had yet to make his rounds. 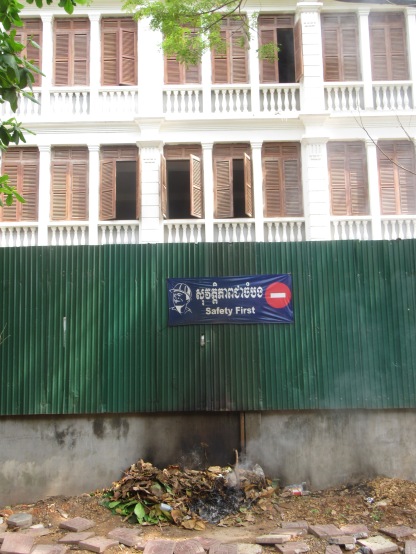 The restaurant and cafe scene is robust and feel-good – many places in town are tied to a particular cause (almost all child-related), and percentages of sales go toward their charity. In many cases, the restaurants serve as training centres for young people who are disadvantaged, and would otherwise be vulnerable to abuse and exploitation. We stopped by for coffee and/or food at a number of them, but the one that made the biggest impression on us was New Hope Cambodia. It is set in one of the poorest slums in Siem Reap, and serves a number of purposes – a training centre for youth, a school for children to learn English, music and computer skills, in addition to their regular education. They also offer family counselling, emergency shelter, medical treatment and food and support for over 300 families. It was at their on-site restaurant where we met two of the staff, Rani and Genda. 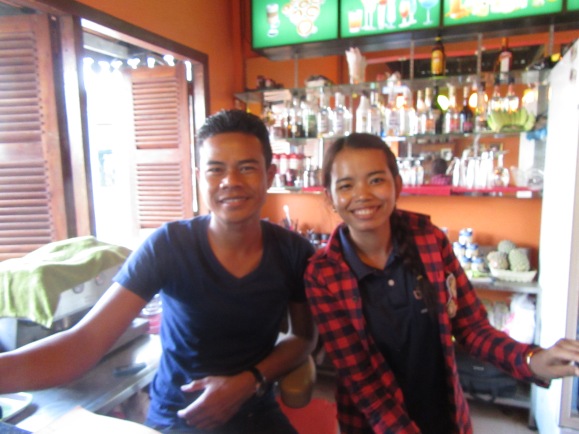 They spent a lot of time explaining the programs and the neighbourhood situation to us. Genda is in charge of volunteers – she has people coming from all over the world to spend time helping out in many capacities. We met an Australian couple who take three weeks of their vacation time each year to work in the school.

Cambodia is filled with stories like that and with young people who are determined to bring their city and country around. The ravages of the Khmer Rouge slaughter have taken decades to recover from and the number of amputees (from the land mines) and street kids and desperately poor people need such a staggering amount of ongoing care, money and expertise.

Twenty percent of Cambodians earn $1-$2 per day and the NGOs make the difference between life and death for many of them.

Sex tourism is another blight. While it is not as overt here as in Thailand, it is a social ill that Cambodians want fixed. 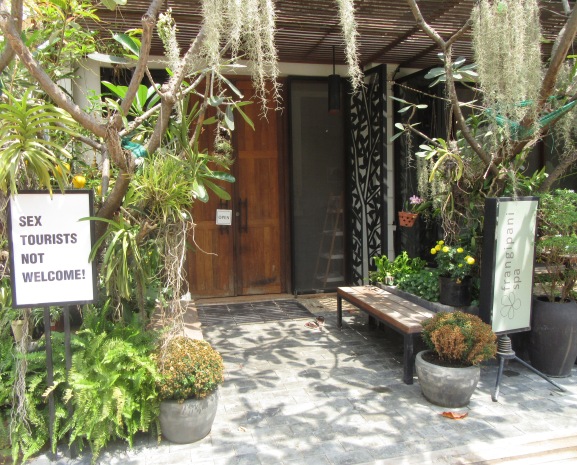 Fighting the sexual exploitation of children is another big challenge. Many hotel rooms in SEAsia have signs posted advising guests that having children (not their own) in their room is illegal.  Brochures outline ways to avoid harming children (no 1-hour orphanage visits, don’t buy from begging children, etc.) They are trying to break the cycle, but when poverty is so dire, families often feel they have little choice.

On the other end of the social scale, we had two beautiful people and a small gaggle of photographers land in on our hotel property the other day. We had just come back and were keen for a swim, so headed down to see what was going on. Not a big fashion shoot as we thought – it was a pre-wedding photo session. The couple will marry in May. 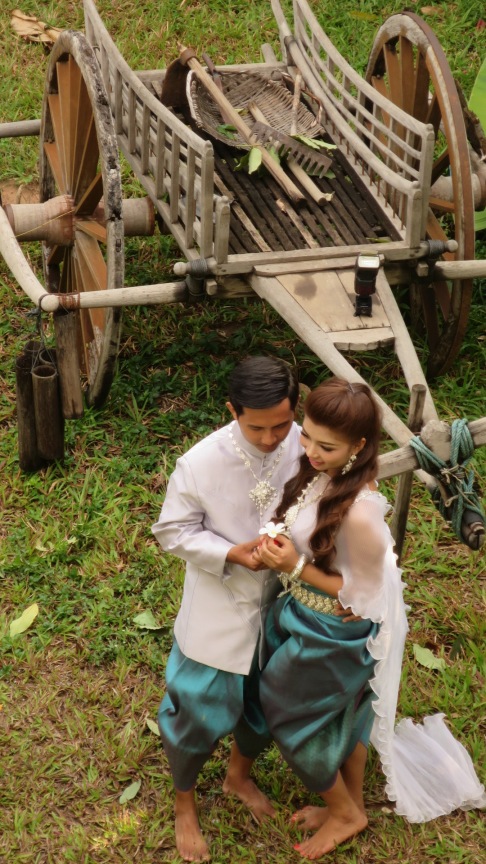 They picked their day wisely – the next day the sky clouded over by mid-afternoon and got very dark and threatening. Again, we had just gotten back home and the skies opened, the winds howled and there was thunder. We got a humdinger of a tropical storm – watched safely and with great enjoyment from our balcony. Within half an hour it was over and the sun came out. 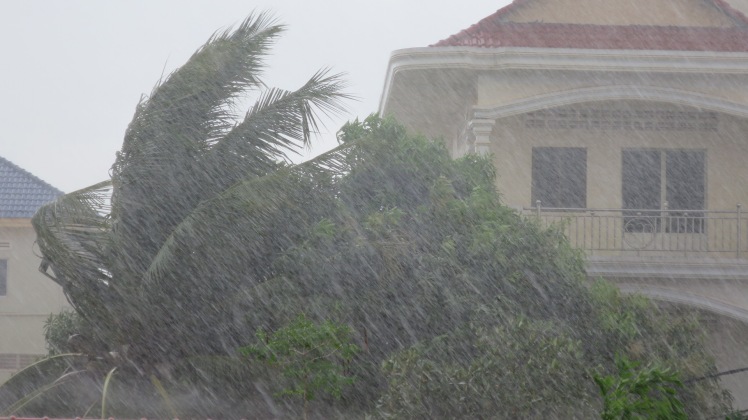 We had a sneak peak at the famous Phare Circus. Artists put on a 15-minute street performance to entice the crowds to buy tickets for their nightly show. Since it originated in Battambang (where we are going tomorrow), we decided to catch the show there, but this was a terrific warm-up.

Tonight, we finished our stay in Siem Reap with a thoughtful cello concert, talk and film. Dr. Beat Richner, a Swiss national who has lived in Cambodia before and after the Khmer Rouge invasion, performs once a week. He is a much-loved pediatrician whom the locals refer to as “Beatocello”. Through his fund-raising efforts and tireless promotion of Cambodia’s great need for help he has created a foundation that has opened and operated five hospitals.

Our first impression of Cambodia has been to witness hope and forward-thinking action on the part of  both locals and foreigners to bring them out of darkness.