We lived in Halifax for five years, and returning here after a 10-year absence was one of the most anticipated parts of our trip across Canada. Driving into Nova Scotia from New Brunswick demands that you pay attention. You are given advance warning, but you have just one chance. The road splits right and left; if you miss the turn, you are heading for Cape Breton. We turned right. 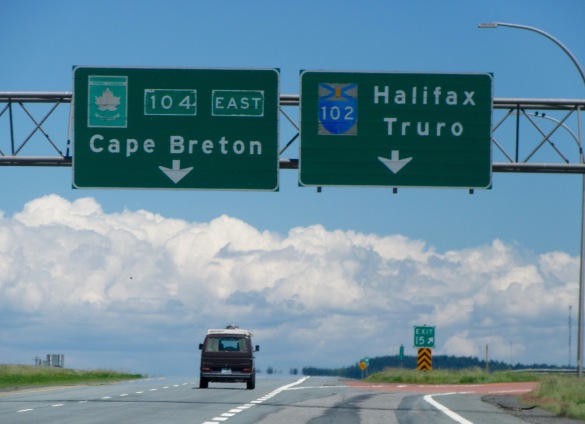 With great excitement, we drove into Dartmouth (across the harbour from Halifax) to stay with our friends Harriette and Mike. We are here for another eight days and there is much to tell about Halifax and our past and present.  But we’ll begin our Nova Scotia stories with a trip to one of our favourite parts of the province – the South Shore. In one day we visited Peggy’s Cove, Chester, Mahone Bay and Lunenburg.

Note to first-time visitors – go much slower and see a lot more. But we’ve been here before and we’re trying to pack in as much as possible.  When we see cottages like this, memories of summers in Nova Scotia come flooding back. 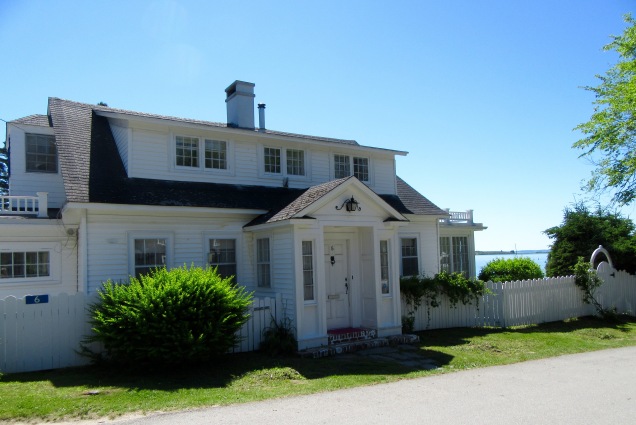 This frequently-photographed home is right on the bend coming into Chester – a pretty and polished little town which looks very much like Cape Cod and for good reason. It was settled by colonists from Massachusetts in 1759 and is one of the South Shore’s primo sailing and yachting resorts. Just around the corner is the marina.

We used to call these roses “Gaspe roses” – but in fact they grow everywhere down east – tough, hardy and more fragrant than peonies. 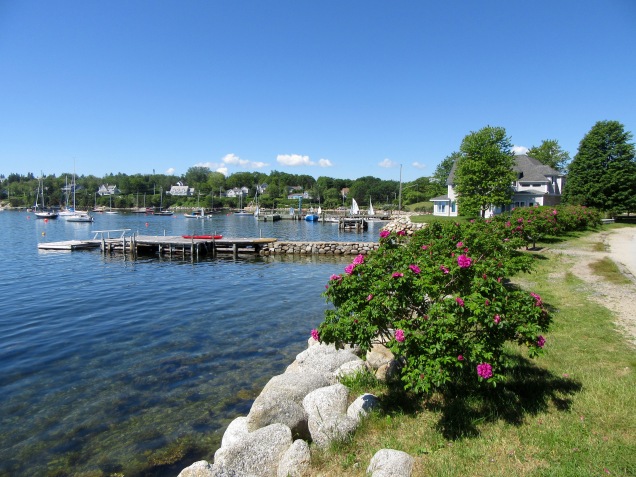 Even in tony Chester, boys are still up to the same foolishness. It was deja vu all over again as we watched a younger version of our sons hitching a ride on his skateboard. 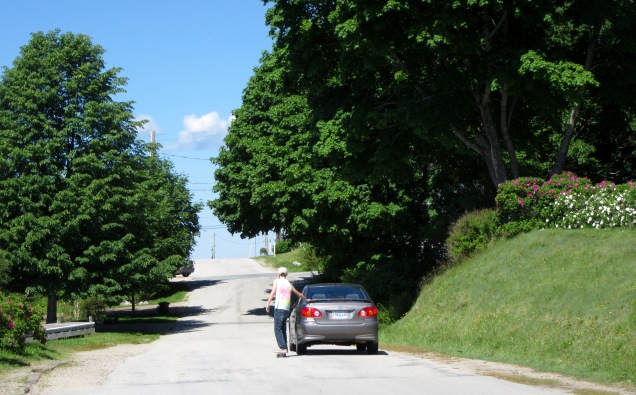 I would have to do a lot of research to identify the many maritime styles of houses. Architecture buffs will recognize the small porches, pitched roofs, elaborate mouldings, shake shingles and be able to differentiate specific styles. For me, houses are like wine. I don’t know much, but I know what I like. 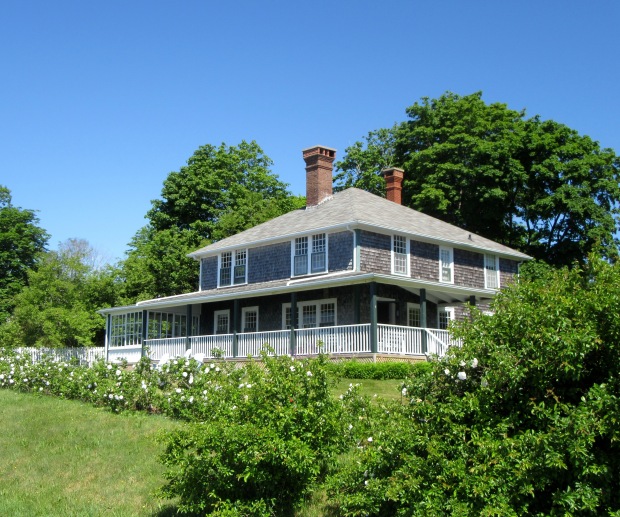 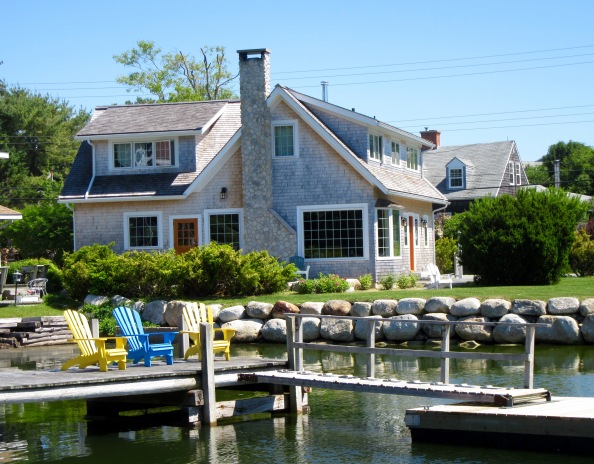 We headed further south to Mahone Bay, next in the series of painterly seaside towns. Mahone Bay curves around a large crescent cove, and is famous for the “three churches” that line the shore – United, Lutheran and Anglican. 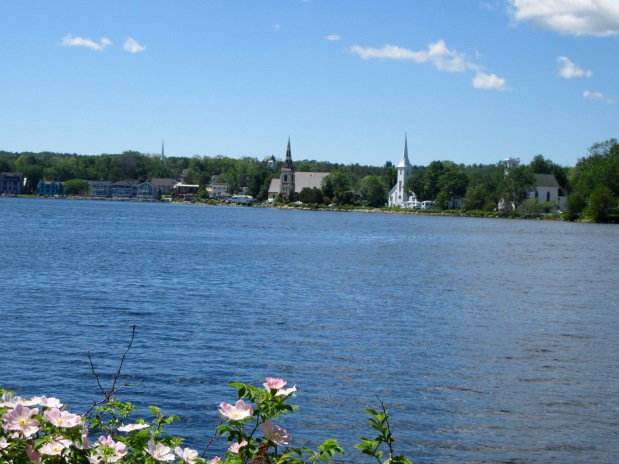 We visited Mahone Bay a lot when we lived in Halifax; our Toronto friends Don and Anne had a summer cottage here, high on a cliff overlooking the sea. The town has not changed much since our last visit; in fact that is true of most of the South Shore. Shops and restaurants change hands, but the beauty and heritage of this area has remained intact.

One of the newer restaurants in town is Oh My Cod! I had a pound of mussels that I could barely finish, served in a beautiful broth soaked up with grilled ciabatta.  “We got them from Pete”  – a local fisherman  who brings them in fresh every day. Stephen had fish and chips – a menu staple that can be the ultimate in food mediocrity. Oh no – a large serving of plump white haddock caught near Lunenburg, very lightly battered, served with a basket of thin, crisp hand-cut fries and a red cabbage slaw.

What we want to know is this – why is fresh, still-swimming fish and seafood considered basic food here (in availability and cost) when it is more of a luxury item out west? 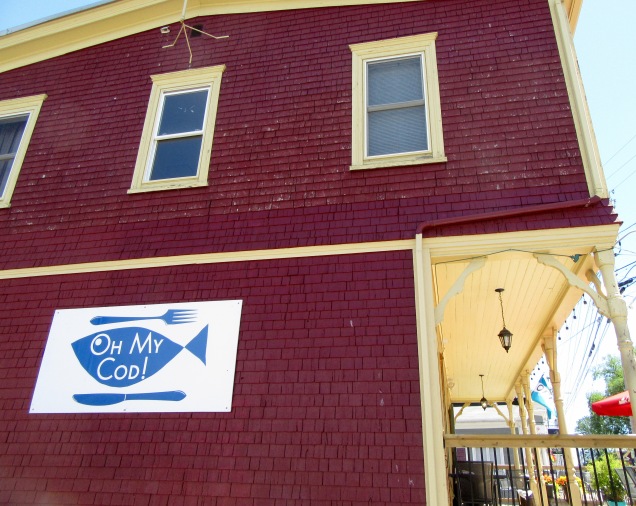 Next, a stroll around town for more house-gawking. This bed and breakfast is for sale… 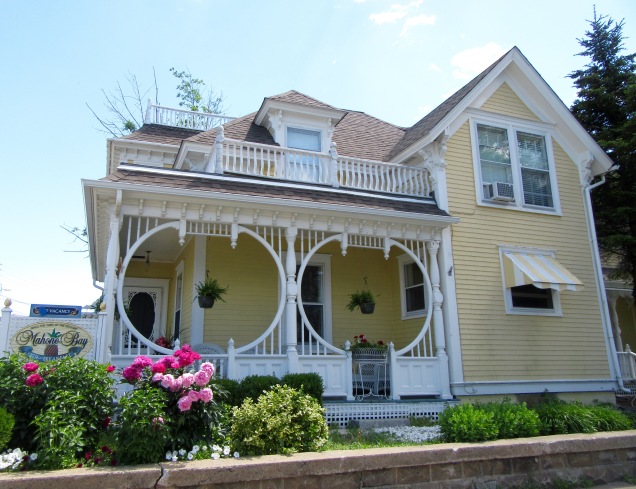 My grandparents had a root cellar which was fascinating and a bit scary as a child – you would open the door and climb down a few steep steps into darkness. I always imagined the door would slam shut and I’d be trapped, never to be seen again. To this day, the root cellar door still feels a bit creepy to me. 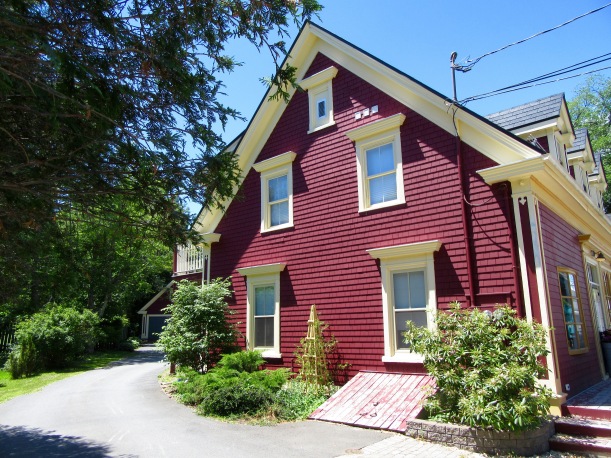 A captain’s home, high on the hill, overlooking the ocean. 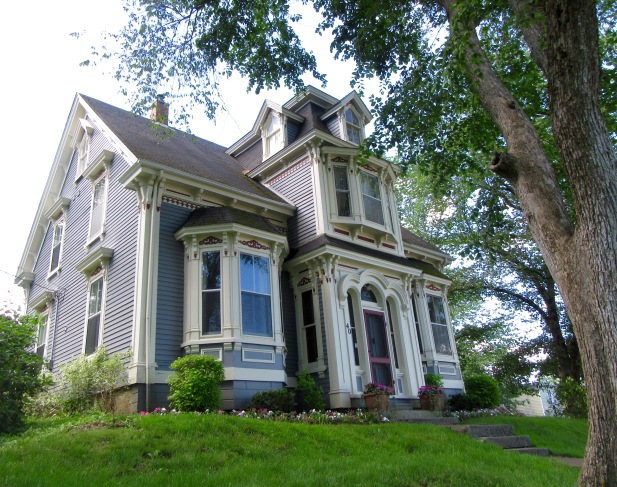 On down we went to Lunenburg, a UNESCO World Heritage site which was founded in 1753 by German and Swiss settlers. They made their fortunes from timber and deep-sea fishing fleets and built a fantastically candy-coloured town on steep streets climbing up from the harbour.

Bluenose II was in town and we arrived just in time to watch her take off for a two-hour tour. Bluenose II is a replica of the famous original (immortalized on our 10 cent coin),who was the fastest vessel of her kind in the ’20s, until she sank off the coast of Haiti in 1946.

Bluenose II (built in the ’60s) is one of Nova Scotia’s iconic tourist attractions; based in Lunenburg, but frequently sailing throughout the summer to Halifax, Pictou and any of the Tall Ships events. 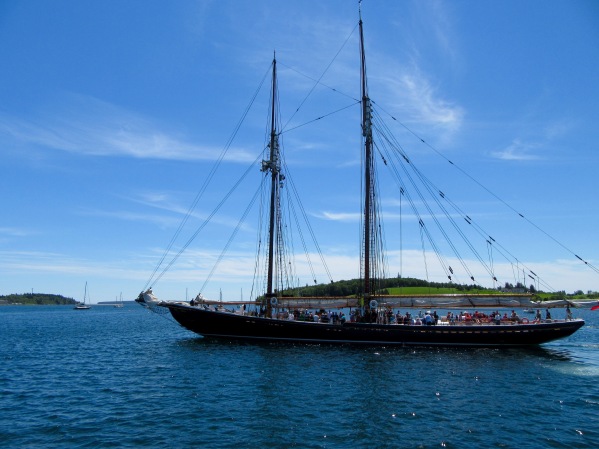 Lunenburg is still very much a fishing town – the busy harbour is filled with fishing vessels and trawlers. 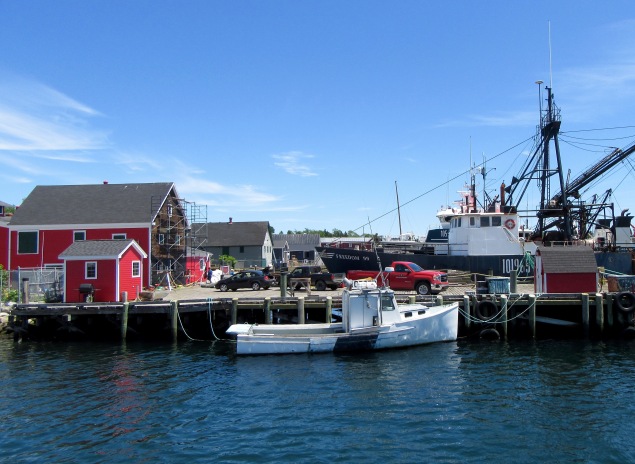 The boardwalk along the harbour has mementoes of its seafaring days – old wooden fishing vessels and this – a 17-foot jawbone of a whale. 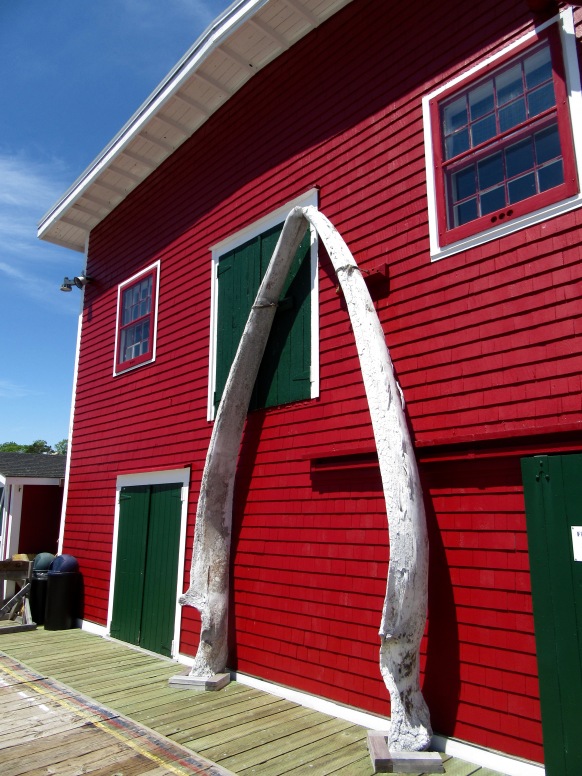 To walk around Lunenburg is to trip over history – ideally you should have a guide so as not to miss the many points of interest. The Lunenburg Academy used to be the area school – it is now a centre for a variety of businesses and is reputed to be haunted. 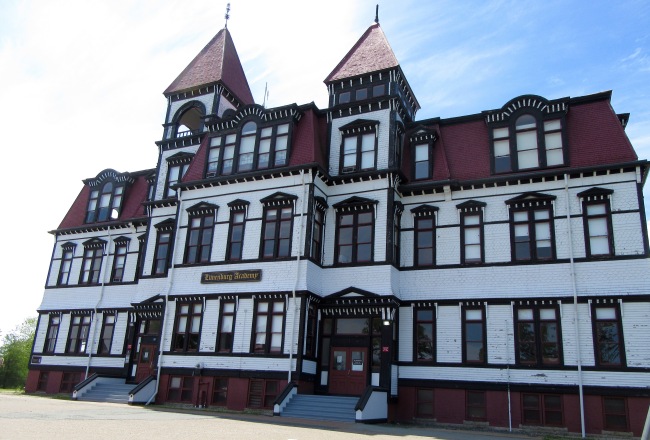 The Lennox Tavern was built in 1791, and had various incarnations as a temperance house and boarding house. Restored in 1991, it is the Canada’s oldest operating inn. 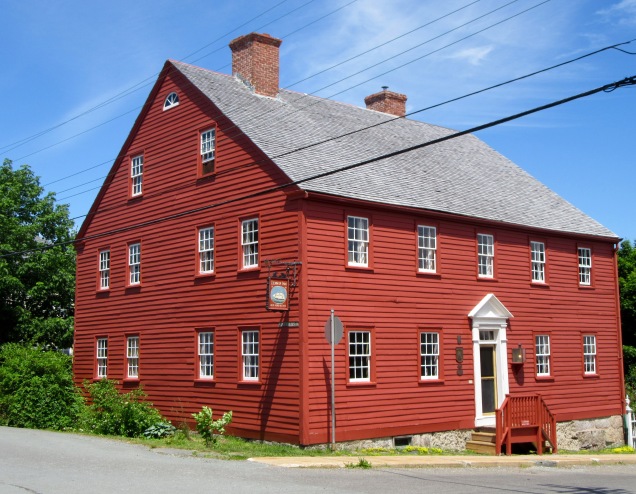 Across the street, two women were catching up on gossip across the fence; seemingly oblivious to the nosy hordes who peer in their windows and squint at the plaques by their front doors. What must it be like to be part of a living museum? 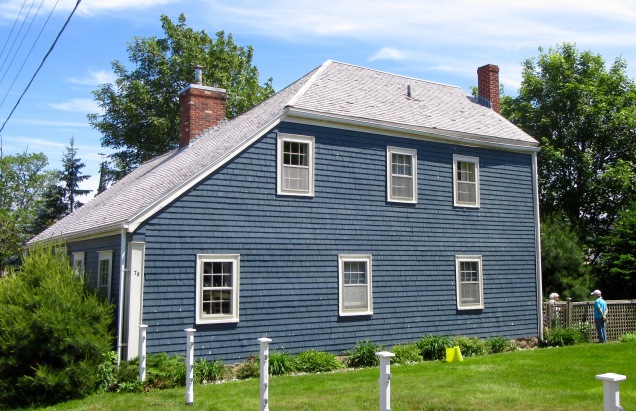 The joy of Lunenburg is its devotion to maintaining its priceless heritage. When St. John’s Anglican church burned down in 2001, it was painstakingly rebuilt four years later in all its Gothic splendour. 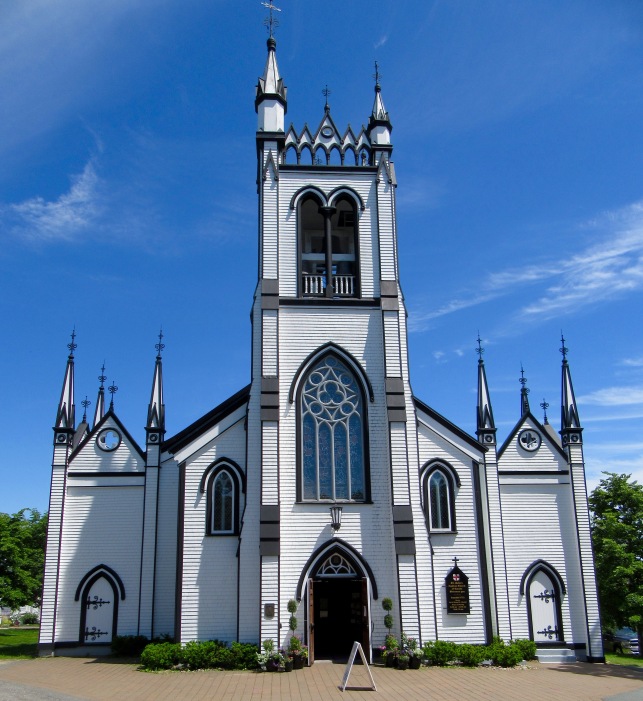 This private home is one of Lunenburg’s oldest buildings, still intact. The sign below is typical of signs adorning many of the homes and buildings. They identify the original owner by their name and trade and year of construction. 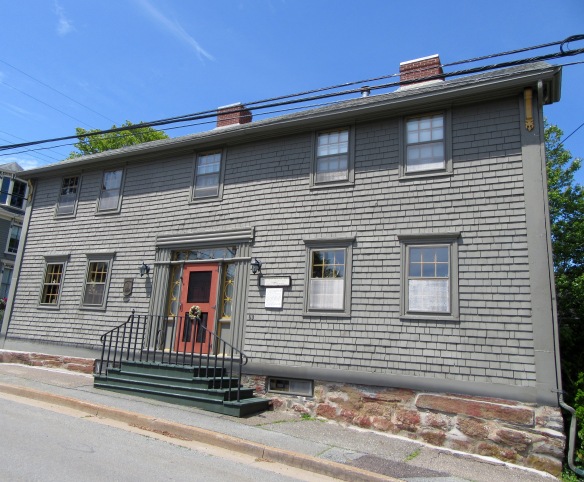 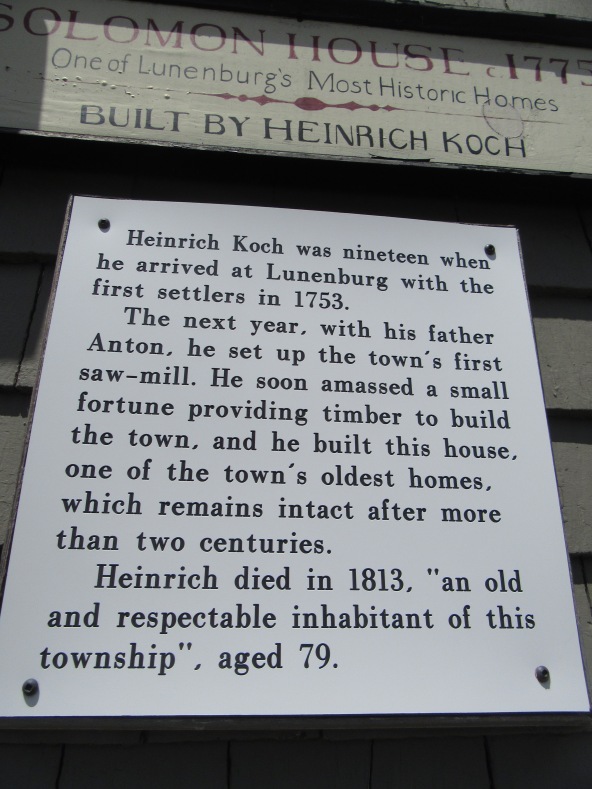 Streets are so full of beautiful homes that it becomes impossible to choose one – if you had to. We began the game of  “which house would you pick to live in”, and came up with a few. If we went back tomorrow, we would choose several more.

This would be perfect for me – big enough, but not too big. A pretty view and a small garden. I love the big homes in all their glory, but all I can think of is the maintenance – the endless scraping and painting and landscaping and required adherence to heritage details. 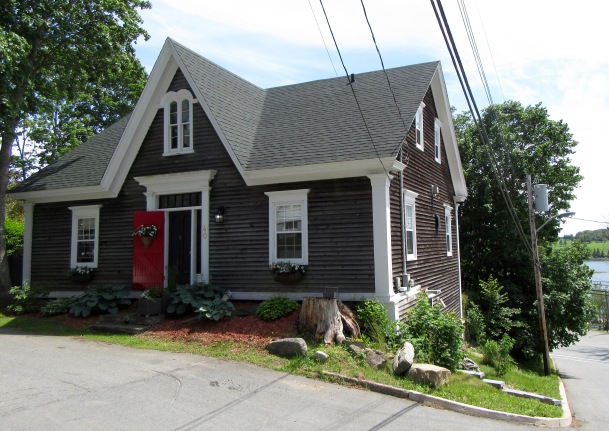 We wonder if these owners have thrown up their hands – they painted one side and then stopped. You can hardly blame them. 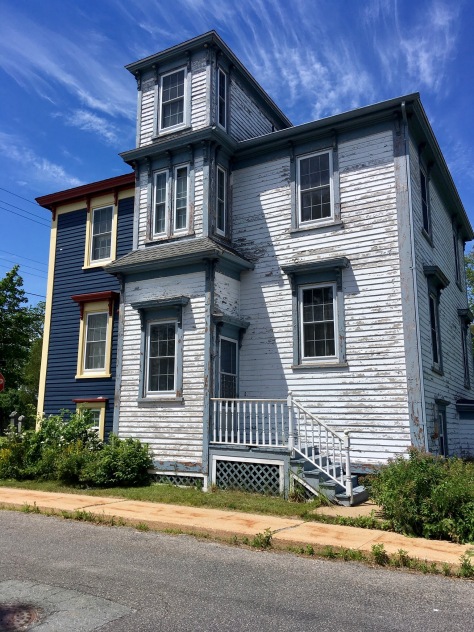 You’ve seen a few houses. Next post will be about the Atlantic and how it has shaped the people who live here – Laurencetown Beach, with its international surfing buzz, Peggy’s cove and the Swissair disaster.

14 thoughts on “Sailboats, lobster rolls and wild roses: Summer on the South Shore”