For a number of years before we moved to Halifax in 2000, we sent away for the NS Tourism annual guide, “The Doer and Dreamer’s Guide to Nova Scotia.” It was better than the Christmas catalogue, filled with activities, events, festivals and photos of lobster suppers, lighthouses and crashing ocean waves. It’s the crashing waves that got to us and changed forever the way we want to live.

We’re fascinated by the treacherous power of the North Atlantic, with its long history of shipwrecks, fishing disasters, hurricanes and rogue waves, to say nothing of epic tragedies like the Titanic and the Ocean Ranger.

Our ocean visits this year have been quite benign – even Peggy’s Cove was like a millpond the day we stopped by. I feel faintly sheepish being part of the throngs of tourists who invade this tiny fishing village on a daily basis. There are two huge parking lots and hundreds of people spill out from buses and cars and start clambering over the rocks. Millions of photos are taken. A gift shop engorged with fridge magnets and saltwater taffy can barely keep up with the demand.

And yet, we are all here for the same reason:

The setting is expansive and in spite of the crowds it is possible to find your own quiet moment here and savour the view. It is always a mesmerizing sight, but even more exciting if the wind is up and the waves roll in. There are archly-worded signs warning people to keep a safe distance. 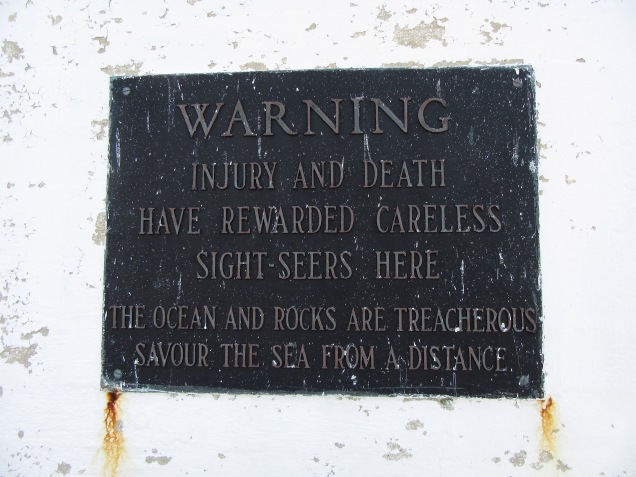 The poor old lighthouse is in need of a fresh paint job and a little TLC. When the Harper government declared a number of lighthouses to be “surplus”, Peggy’s Cove was among them. An eleventh hour private buy-out saved the lighthouse, but it doesn’t seem right that such an iconic tourist attraction does not fall under some governmental jurisdiction to ensure enough funds are in place for regular maintenance.

There are countless ways to photograph Peggy’s Cove – everyone who has visited has variations of the following scenes:

Just up the road is a memorial to the 229 people who lost their lives in the 1998 Swissair 111 plane crash, in the waters offshore from Peggy’s Cove. The crash location is roughly the mid-point between the arches. Just right of this photo is Bayswater, an area where a number of fishermen first responded to the rescue call.  There is a memorial there as well, with all the victims names engraved.  The locals and the families of the victims wanted the memorials to be exactly what they are:  simple, sombre and moving.

Peggy’s Cove is not all about the lighthouse. This road is perfect for a bike ride.

A familiar sight in Nova Scotia are the lupins –  roadsides painted in broad strokes of purple and mauve and pink. They can be found just about everywhere, but especially close to the sea. 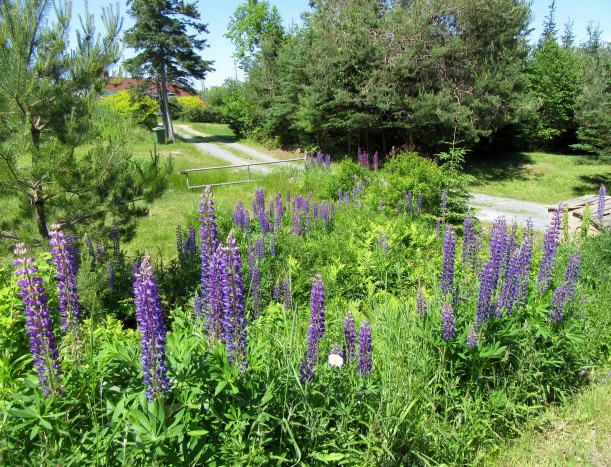 Lawrencetown Beach was one of our favourites when we lived here. After a scenic 45-minute drive from Halifax along the eastern shore, this was the dramatic entrance: 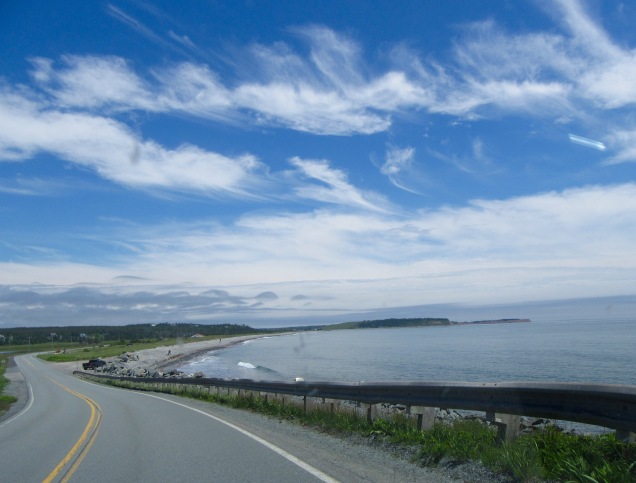 The view heading back is equally striking.

You don’t come here to swim. The water at Lawrencetown Beach is unimaginably cold – there are no coves or bays to shelter from the wide open Atlantic. The “beach” is made of large flat rocks that are challenging to walk on without turning an ankle. And yet, this has become a major surfing destination.  The day we visited the surf was quiet, but that did not deter this young man; especially since he had the beach to himself.

Just waiting in the wings was another young man with a van full of wetsuits and boards; another week or two and his business will be brisk.

Closer to home, our encounters with the ocean have been our outings on Halifax Harbour. We are staying in Dartmouth with Mike and Harriette, so there are two choices to get over to Halifax: take the little 10-minute ferry across or drive over the bridge.  Either way, the views are fantastic.

The Halifax waterfront is a reflection of the city –   a mix of old and new, historic and under-renovation – one foot in the past and one in the present.

Walking along the boardwalk is a treat for the senses. Great people-watching, good food, a harbour full of marine traffic, and funny little moments.

This wave has been a kid-magnet for years – our boys climbed it when we first visited here. There is a sign that makes a limp effort to show some level of concern – it is soundly ignored.

Segways are a popular attraction – they make covering the length of the boardwalk a breeze, especially  now before the weather gets too hot and the summer crowds hit.

Of course, boats are the big attraction. This is a very busy working harbour, with coast guards, ferries, container ships and tugboats plying the waters. In addition, cruise ships, the Tall Ships, and international ships are frequent visitors.

The USS Dwight D. Eisenhower arrived in Halifax harbour a few days ago to great fanfare. It is one of the largest aircraft carriers in the US arsenal,  at over 333 metres long, with over 6000 men on board and the capacity to carry 60 aircraft on board.

Keeping it company were two massive cruise ships docked at Pier 20. The ship with the blue hull was quite luxurious: visible from the rear were two-storey staterooms.

Less luxurious and quite controversial was a Tall Ship, the 400-ft. Chilean Esmerelda, reportedly used as a floating prison and torture ship during Pinochet’s regime. 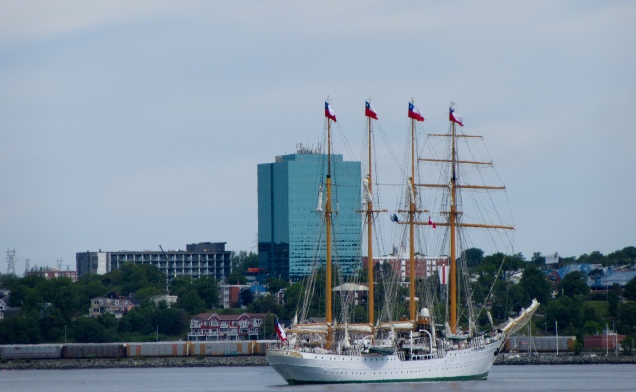 The marina at one end of the boardwalk is always a delight – tiny boats, big yachts, sailboats – fun to check out the flags to see who is in town.

Halifax used to dump their raw sewage right into the harbour; making a boardwalk stroll far less pleasant. Ten years later, the water is clear and clean; the transformation has been remarkable. This is water you can now paddle in, as demonstrated by this crew on their way to the launch.

If you look closely, you can see Theodore the Tugboat just over the top of the kayak. 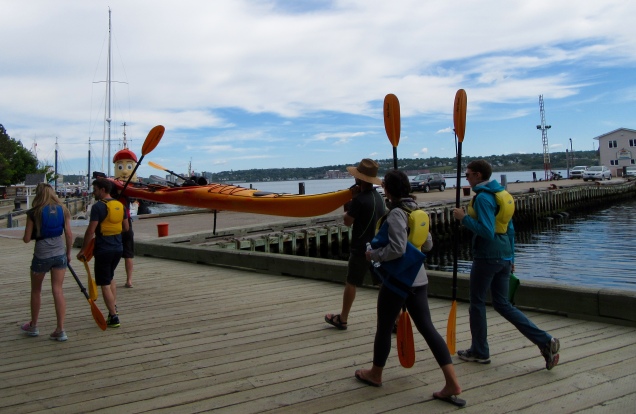 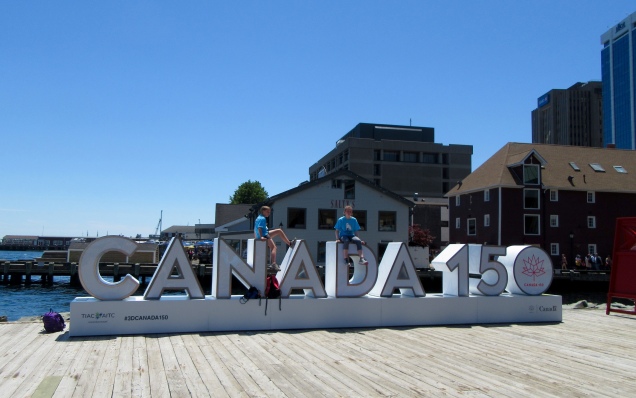 Like the rest of the country, Halifax was all dialled up and ready to go – concerts, fireworks, pancake breakfasts and parades planned and most of it washed out by steady downpours. The rain has subsided now, but I’m writing this to the beat of a steady fog horn.

We celebrated Canada Day by  going to the Dartmouth farmers market in the morning, walking around Lake Banook in the afternoon, stopping to listen to some blues (with about 12 other soggy souls), munching on a bag of Halifax’s famous and incomparable Bud the Spud french fries, then heading back to the dry cover of Harriet and Mike’s deck to listen to Canadian tunes. We led out with Leonard Cohen’s Hallelujah sung by k.d.lang. We tried to get a rousing discussion about all things Canadian but gave up as it felt a little too earnest. We were polite about it though. Harriette treated us to an exceptionally fresh and delicious haddock chowder for dinner.

A fantastic way to celebrate being Canadian, being with friends and having the freedom to do what we do.