Well, we are more than halfway through our travels and I had to jinx myself. “We may make it through this trip without getting sick,” I said. Oh boy, a day later it began, with chills and fatigue (luckily we flew from Varanasi to Jaipur before I began feeling unwell). By the time we got to our hotel, I needed to lie down and a few hours later, I got nailed with a particularly virulent strain of acute diarrhea that lasted for 24 hours, eliminating whatever evil I had ingested but leaving me too weak to move for hours after.

The reason I am telling you about my GI woes is this: I missed Holi – one of India’s most exuberant holidays. Holi is set around the full moon – this year March 2. Holi, (or The Festival of Colours), marks the end of winter, the triumph of good over evil and the burying of old grievances – all done by rampaging around town with fistfuls of coloured powder and squirt guns and playfully “baptizing” anyone in your path. It is meant to be festive and fun, but you need to know not to wear your best clothes.

I was so looking forward to being part of this silly, happy street event, so it was extremely disappointing to be sick and stuck inside our hotel. Stephen headed out to see what all the fuss was about and almost immediately he encountered these Aussie kids.

By the time Stephen made it back to our hotel, he had been thoroughly, although monochromatically “holi-ed”. They use cheaper synthetic powders these days, so it took a couple of days for the red to leave his beard.

We had been warned by our hotel manager not to travel around on Holi by tuk-tuk, because “there is a lot of drinking and driving.”

We’re so interested in the conflicted approaches to alcohol in India; many of them driven by religious beliefs, but not necessarily observed. At least three states are completely dry but almost everywhere we’ve been outside of Goa has a secretive attitude towards drinking. Many restaurants will serve beer but you have to ask – it is not listed on the menu. Finding a liquor store is almost impossible and if you are in a predominantly Muslim area, there is not a drop of alcohol to be had. As a result, we drink very little (not a bad thing!), and from time to time, if beer is easily available, we order it.

Last night we went to one of Jaipur’s favourite tourist restaurants, The Peacock. Set on the rooftop of a heritage hotel, we had a wonderful evening, with fun people-watching, fabulous wood-fired pizza and beer.

The Peacock offered somewhat cheesy entertainment for the tourists, but it was traditional and lent a nice background tone.  We were the only ones paying attention to them – all Stephen could think was how much the singer looked like Russell Peters.

Our bill arrived – with our beer added on to the printed bill by hand! The denial of sale and consumption is a mystery, but from what we hear over-drinking is a serious problem in India and these prohibition-style rules must feel like a solution.

So…here we are in northern India, in the state of Rajasthan. If your impressions of India include images of camels, massive sandstone forts, desert dunes and palaces, you’ll find it all here.

There may even be a snake-charmer or two. We wouldn’t normally fall for this, but we were kind of ambushed by our tuk-tuk driver on the way to a fort.  We were assured the snake was “very dangerous“, but I’m sure I could have wrapped that critter around my neck and taken it for a walk. 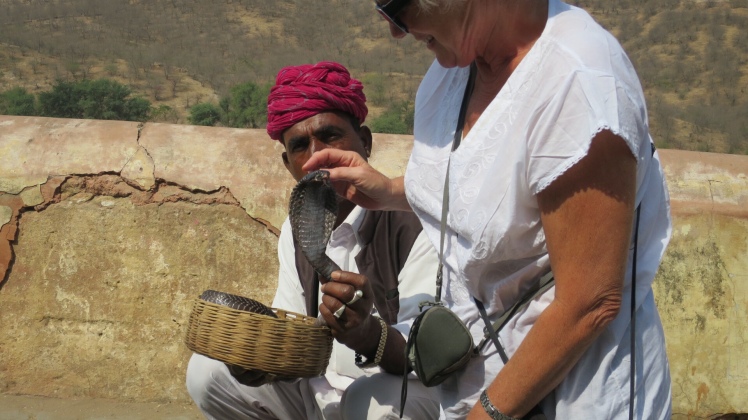 Jaipur is the capital of Rajasthan and home to the Old City or Pink City (named for its salmon coloured buildings) that contains most of the city’s important architecture as well as the honeycomb of bazaars within its walls.

Beyond Old City, Jaipur sprawls; a city of over three million people. Our drive in from the airport was pleasant – past modern office towers and luxury hotels. Our travels around town since then have been the opposite – absolute chaos.

We have been commandeered by a young driver, Ilyas, who keeps his tuk-tuk just outside our hotel.  He has taken us around to a few sites and to give him his due, has respectfully accepted our refusal to “go shopping.” He did show us a video on his phone of his friend smoking hashish – floating it out there as another potential revenue stream. “Why yes, we’ll buy drugs from a tuk-tuk driver in India,” was our first thought.  Since Stephen does not partake and my very occasional foray usually results in paranoia and sightings of giant squirrels, Ilyas had mis-read his clientele.

However, he was excellent and chatty company as he drove us around –  telling us about his life as a father of three, married to a Muslim woman but still seeing the Hindu girlfriend he had not been allowed to marry due to religious differences. He’s uneducated but street-smart and seems to have a few deals on the go to keep things afloat. Very hard-working and doomed to live this hard-scrabble life until old age.

We visited City Palace, much against Ilyas’ best advice – “they charge you 500 rupees ($10CA) for a museum – it’s a rip-off.”  We dutifully went in, because it is listed in Lonely Planet and he was right – large courtyards, a few boxy gardens, and little else to look at.

Driving through the streets of Jaipur provided us with way more to think about than any palace. As in all of India, animals roam freely, but we had not yet seen pigs right in the city. These big porkers drew our attention to the thick black sludgy sewage that ran along the gutter – a perfect bed for them, but also for small children and dogs.

The smells were almost overwhelming – even mouth breathing was not helping. These ladies must make a few rupees sorting through garbage – it appears to be a lot of plastic. 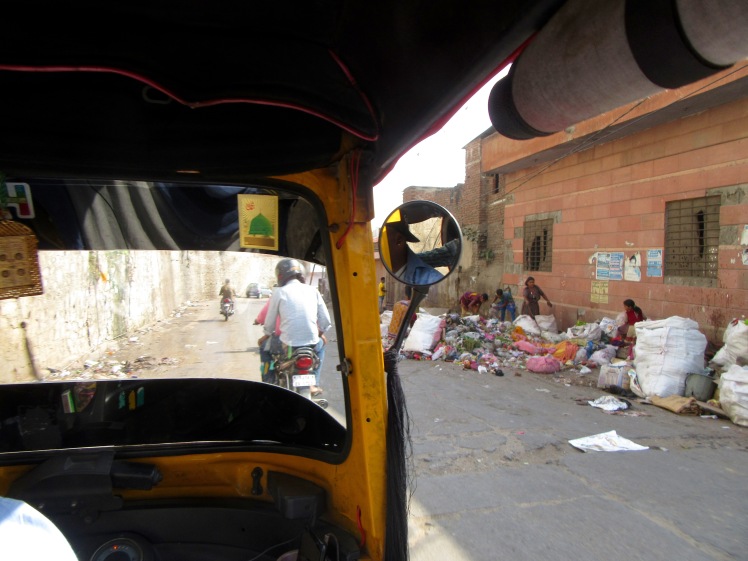 Traffic on most streets looks something like this. The beeping is constant and miraculously everyone gets through without mishap. We have driven past vehicles with not even inches to spare dozens of times. I look around – no-one bats an eye – they’re all on their cellphones.

I am currently reading The White Tiger by Aravind Adiga; an unforgettable Man Booker-prize-winning novel about India that is all the more compelling for us being here and witnessing what he is talking about.

Cell phones, for example. EVERYONE in India has cellphones and not just any old flip phone – smartphones!  They are obviously cheap to buy and plans are cheap. As Adiga points out in his novel – the government has made it possible for everyone in India to have a mobile, but not drinking water.

Even mahouts are on their phones 24/7; this photo breaks the magic a little for me, I have to say.

Amber (pronounced Amer) Fort is the big draw in Jaipur. About 11 km. out of town, it is  a formidable presence. Built in the late 16th century of sandstone and marble, the Fort is built in four sections, each with its own courtyard. 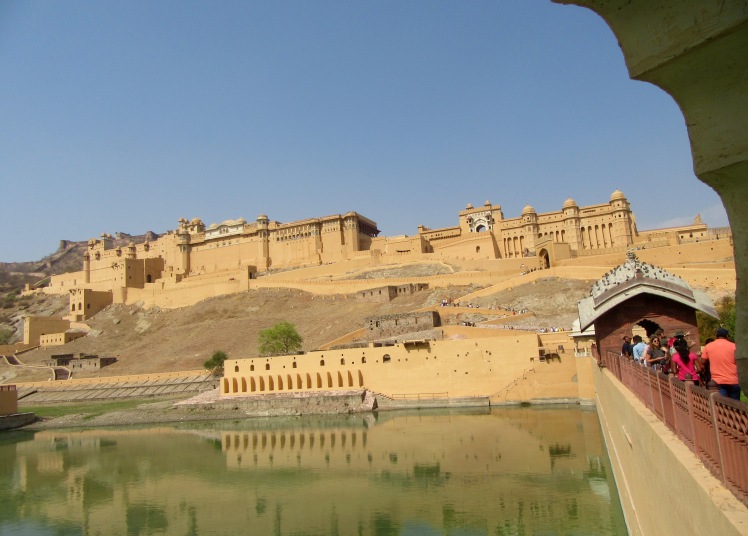 Amber Fort is accessible from the main road by crossing the lake then climbing up stone steps to the entrance. This 10-minute walk is also available by elephant, but there were few takers. Hopefully the message about cruelty to elephants is starting to penetrate.

Just watching them within the confines of the fort is a beautiful sight though – reminiscent of how it likely was 300 or 400 years ago.

People-watching was almost as much fun. This group of Thai women were unabashedly posing and their guide snapping away madly. I waited to ask them about their gorgeous Indian outfits (bought at Anokhi, an upscale shop). Fabrics here are simply the best – I will have to pick up a couple of things just before we head home. These are way too nice to travel in.

They were very pleased to hear we had been to Thailand. One lady thrust a parasol in my hands and told us to pose and their guide began snapping away.

I love seeing large groups of Indian women – like a flock of tropical birds in their colours and flowing fabrics.

And then we ran into this trio. I seriously thought they were part of a cult – dressed in white muslin, with fluffy white bedroom slippers, a mop tossed over their shoulders and the “speak no evil” paper tied in front of their mouths. They are part of the Jain faith, an ancient Indian minority religion that practices among other things, an absence from hate and harm and from attachment to belongings. They are vegetarian, if not vegan and wear no leather. Not all Jains look like this – I wish I could find out more about them.
They were quite friendly, posing for photos, and chatting, but obviously eschewing an attachment to objects does not include giving up a cellphone.

And then there was these two beauties – attached to everything life will bring their way.

The Fort is well maintained and appealing – we spent close to two hours wandering through courtyards and along narrow hallways. 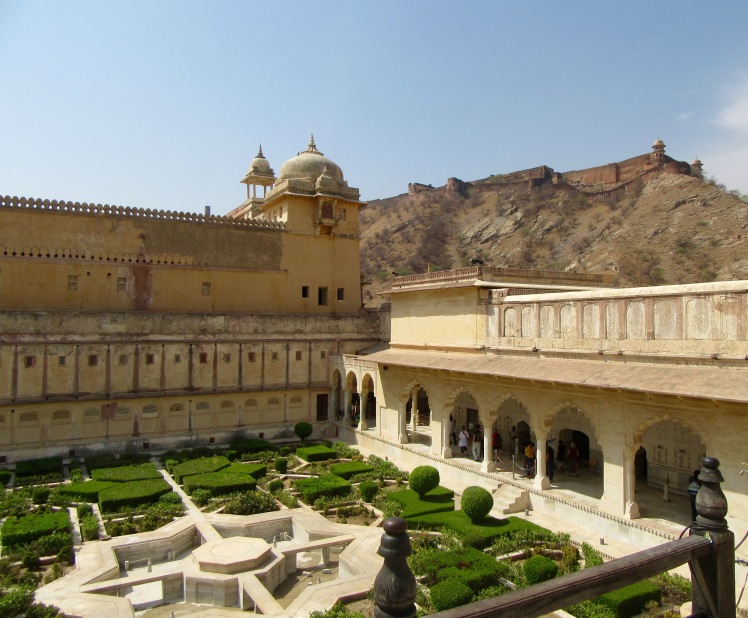 On the way back into town, we pulled over to view the Water Palace – at first glance, a shimmering vision. When you walk up to the fence for a better look, the first two or three feet of water are filled with garbage.

Hawa Mahal is an extraordinary building – intricate layers of salmon-pink that was built to allow the royal ladies the ability to watch processions in the streets below in privacy.

Right across the street is this building. It seemed to be a popular hangout and we stopped by for a cold drink, but could not find a table in the shade. The building is typical of those lining the streets in Old City.

Hawa Mahal rises up five stories and tiny corridors open up to views like this one.

These little windows would allow the ladies their chance to watch goings-on without being observed.

Back out on the street – it is business as usual. The bazaar is in full swing, with everything from key-cutting…

And now we leave the big city behind and move on to discover Rajasthan’s famous  and much more manageable charms. Next up is Pushkar.