We had hit that point in our travels where the heat, dirt, noise, garbage, cows, dogs, beggar kids and marauding motorcycles were taking their toll. We were losing our energy and worse, we were losing our interest. Emails and photos from home were making us homesick – not just for friends and family but for cool, clean air and toast with marmalade. We were planning out the rest of our trip, saying, “Just four more weeks and we’re home“, as though our remaining time here was an obstacle to be endured.

And then we arrived in Pushkar, a cattle and camel trading town of around 20,000 souls, perched in a valley and ringed with low hills, and something switched in us. There are still the unrelenting touts and throat-closing smells and starved dogs, but we realized we have an incredible opportunity now. Our trip no longer stretches ahead without horizon, with days to be frittered. Now, we don’t want to miss one thing – good, bad or sad.

Pushkar is a holy town; many Sikhs and Hindus make a pilgrimage here at least once in their lives.  The town centres around a small  holy bathing lake, ringed with 52 ghats. Some of Gandhi’s ashes were scattered here. One must remove shoes to walk around the lake and photography of temples or bathers is strictly forbidden, but we did sneak in a couple of long shots of the buildings on the other side. 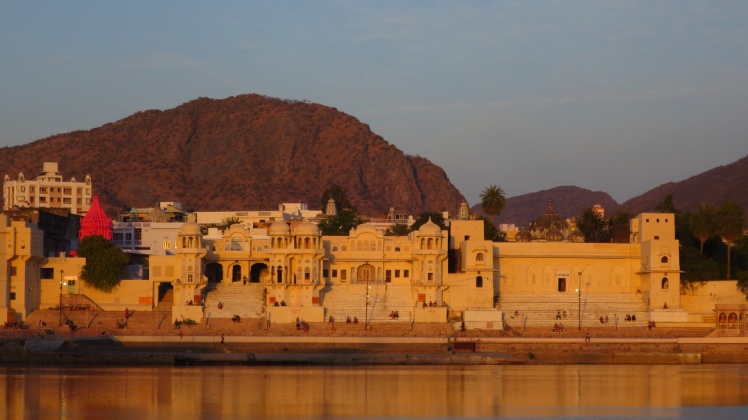 Our first evening in Pushkar, we spent a couple of hours by the ghats until we were driven away by the touts. There is a well-documented scam that exists here – there are even official signs posted for tourists to beware of anyone “offering gifts.” What happens (dozens of times) is this: you will be approached by young men trying to press small flowers into your hands for “good karma”. If you refuse to take the flower, you are angrily accused of being disrespectful. The whole idea is to bully the unaware tourist into approaching the lake with the flower, and then the sales pitch for a hefty donation begins. Because we knew about this ahead of time, we cut them off every time and each time we were met with anger. It is the downside of Pushkar and casts a deep shadow on the holiness of the place.

We discussed this concept with another young man, Sandeep, who has no use for these characters. As he said, “karma cannot be bought.” What can be bought from Sandeep however is chai tea.

We were expertly hauled into his stall and before  we knew it, we were sitting on stools and waiting for our tea tasting tray to be prepared.

Sandeep’s chai is not served with milk,  “a hangover from British rule”, he said. He prepared 6 small cups of chai – rose, lemon, mint – among them – all of them refreshing and healthy. We bought a tin to bring home – paid way too much for it, but you can’t keep your guard up all the time and he was charming. Good karma. 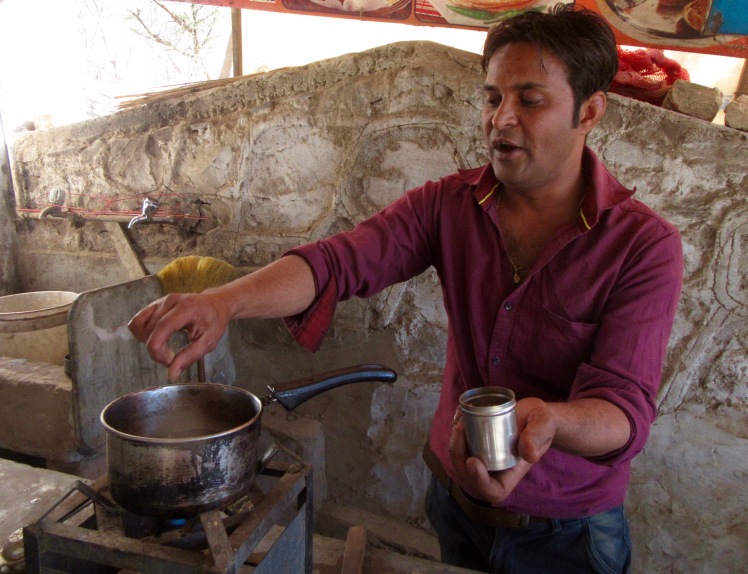 There are over 400 temples in Pushkar (many of them tiny shrines, really), and non-Hindus are not allowed to visit inside most of them.

This is as far as we could proceed, but it will give you an idea of the intricate lacy design. 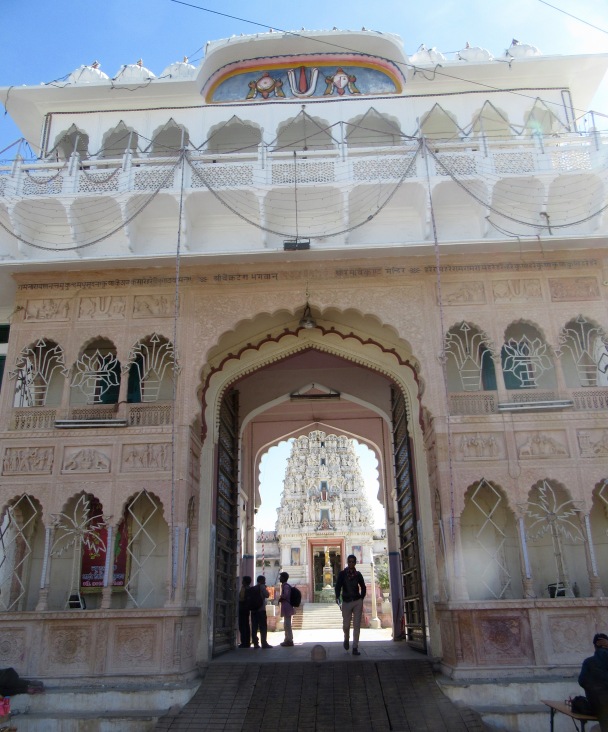 Everyone is welcome to visit the Sikh temple – a massive white pile on one end of the lake. I had my head covered, but Stephen’s ball cap was not allowed, so they tied a dirty old dewrag on him. We washed our hands,  removed our shoes, bathed our feet and proceeded. It is a somewhat strange thing to visit temples – we have no context of it being a religious building, so it is not always clear what we’re looking at.

On a purely aesthetic basis, this temple was worth the visit.  Stunning, pure white marble and immaculately clean. 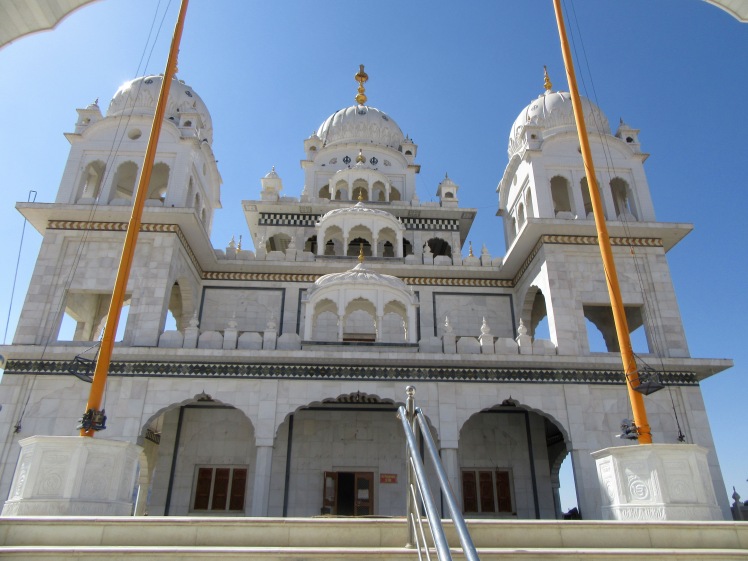 The town of Pushkar is made up of twisty, tiny laneways that lead down to the main shopping bazaar and beyond that, the lake.  Our hotel is well tucked away from the hubbub, and this is the lane that leads up from our front door. 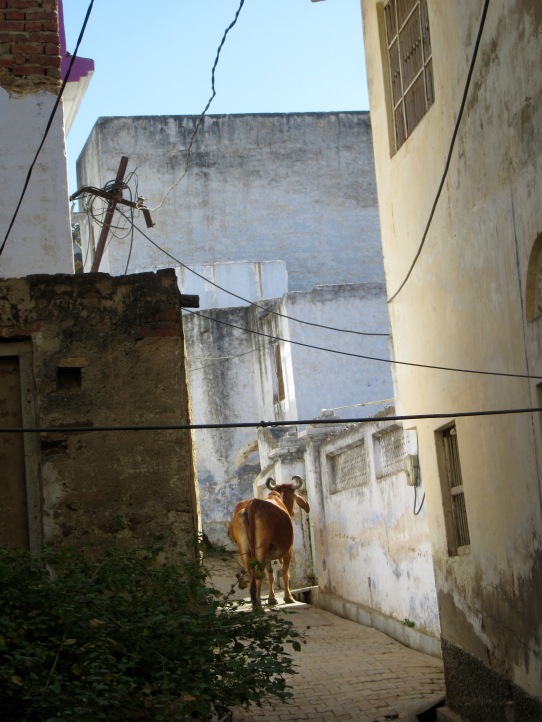 There are so many shops and stalls and impromptu markets all over India. We’re trying to figure out the business plan. In little Pushkar,there may well be 400 shops or more selling almost identical merchandise. How do you bring enough tourists in your door to make it work? One enterprising young man offered me cigarettes and when I told him I don’t smoke, he was undeterred. “You can start!”  Refreshingly, there seems to be less of a hassle here than elsewhere in India – often the shopowners just sit and let the world go by. 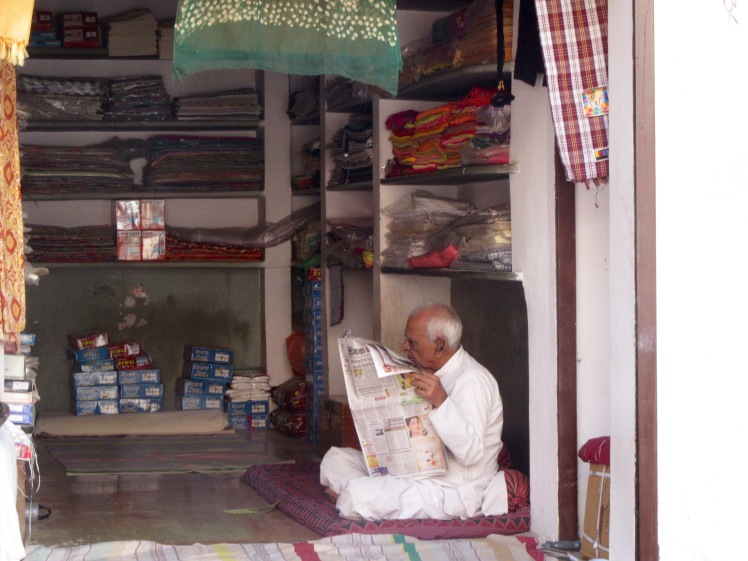 The produce market is also low-key. They’ve got all day. We watched this old gent park his bike, walk slowly over to inspect a bunch of parsley, make his purchase and head back again. 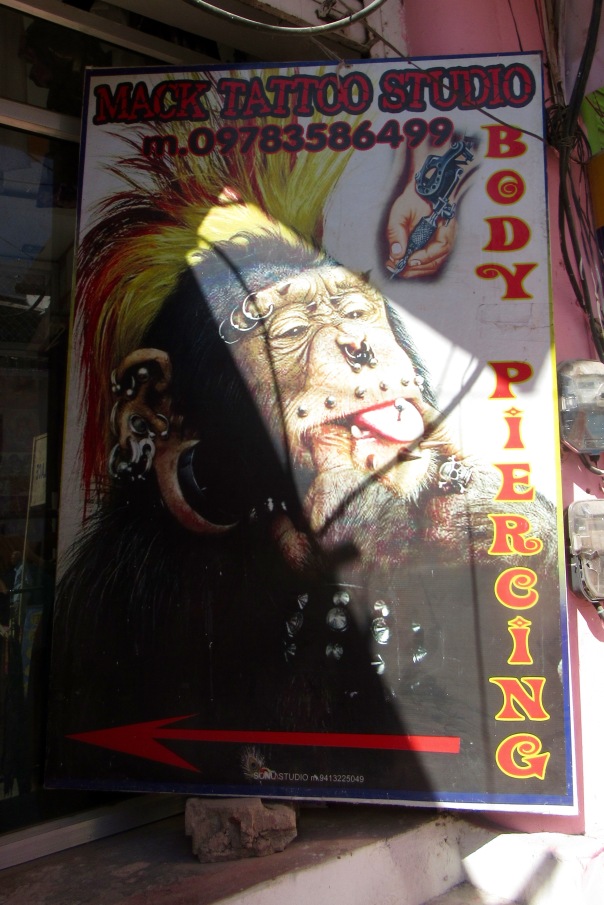 We stopped by a shady garden restaurant yesterday for a cold drink and had a most interesting chat with the young Russian manager Olga who has lived in India for six years. We admired her tattoos – an airplane on one arm ( to express her love of travel), and these sayings from Mother Teresa on the other arm. I had not heard them before – and I love the way they can be interpreted a number of ways. 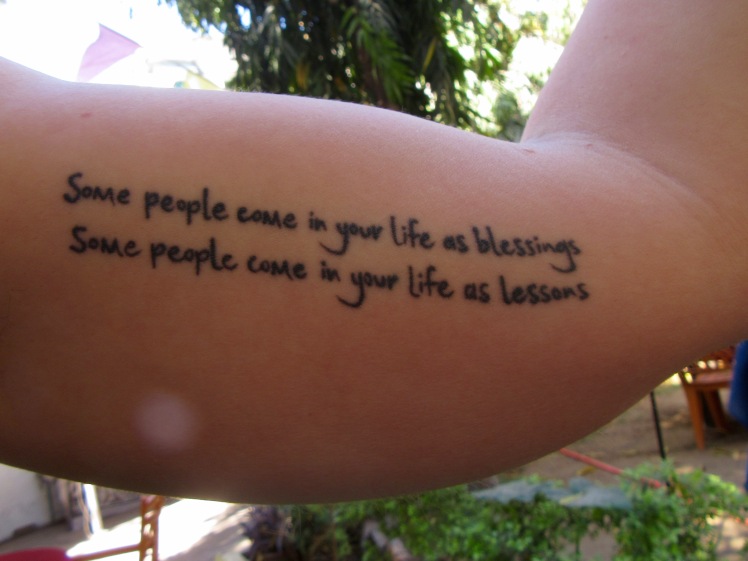 Today was International Woman’s Day and we were delighted to come across this march. These young girls were loudly and proudly yelling out as they marched along; no cowed and covered girls – these are the faces of modern India.

They belong to a school that was created just a few years ago, with 60 girls. Today, there are over 500 students.

The alleyways bring such surprises – you have to remember to look up, backwards and sideways to see it all. Much of the paint has a chalky quality to it – almost as though it would wash off in the next monsoon. 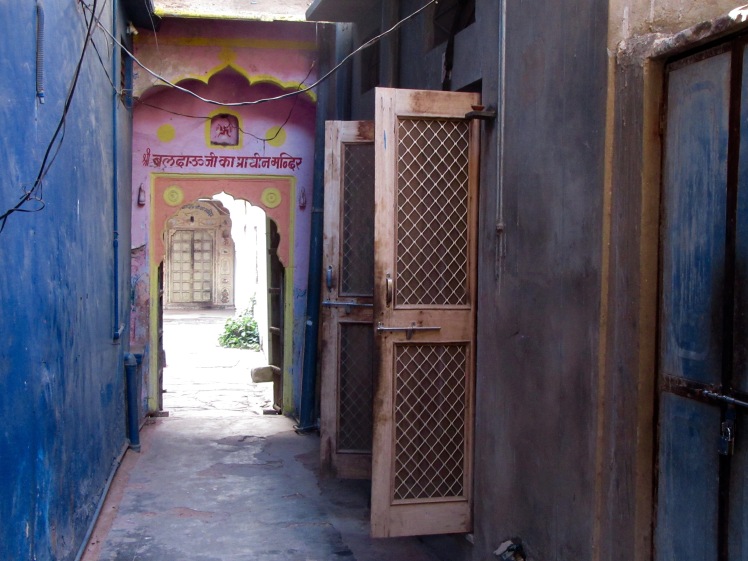 Many teeny little doors or windows like this one. Yes, I am quite sure those are urine drips running down the wall.
Stephen and I were sitting on a shady ledge today, minding our own business, when a dog came over to us, lifted his leg and peed on my foot. A woman walking by told us that it is good luck (I think she was making it up to make me feel better.) 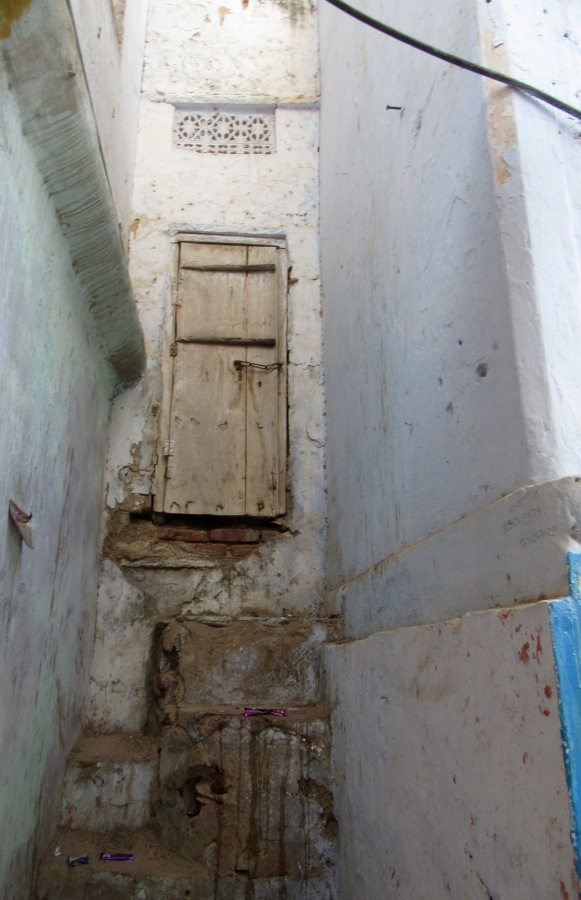 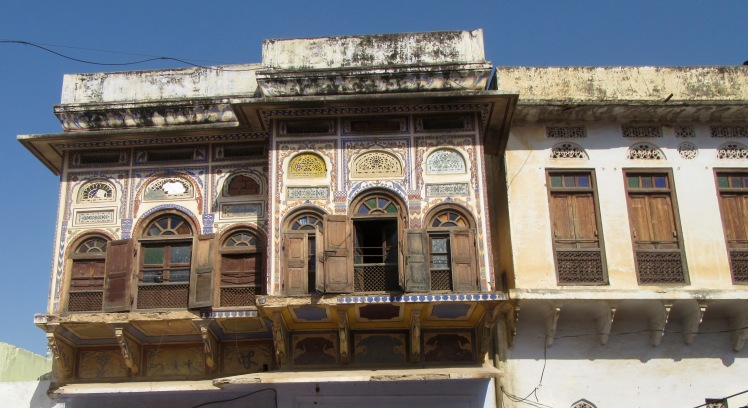 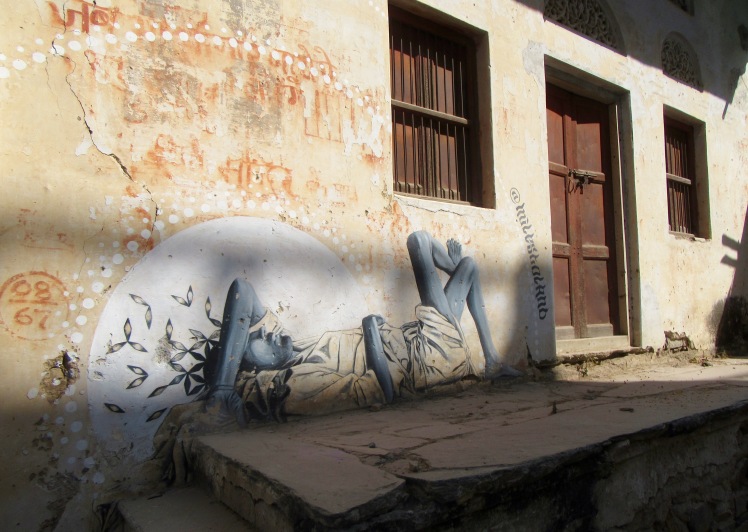 Part of Pushkar’s raison d’être is the camel trade – each year the Camel Fair draws thousands of buyers, traders and tourists. The rest of the year, camels are available for safari or for a cart-drawn ride around the outskirts of town. 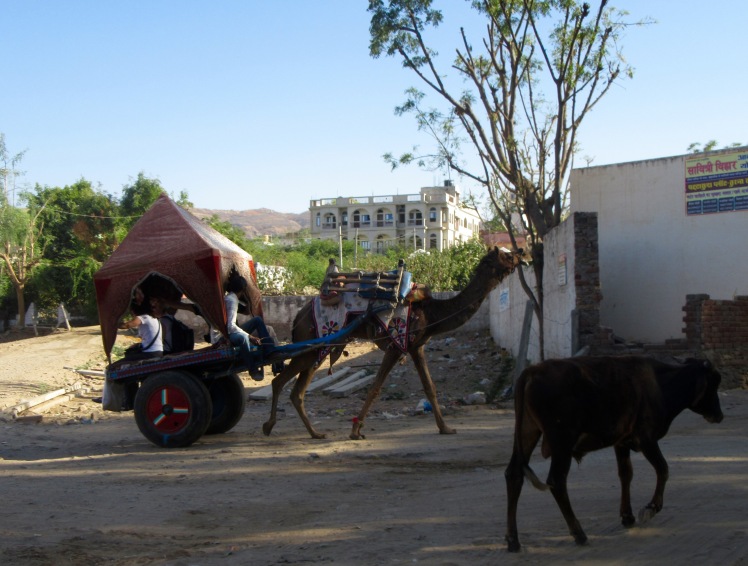 We passed a number of camel carts on our way to grab the cable car to Savriti Mata Temple – a Lego piece precariously perched on the narrow top of the hill. There are two ways to get up and/or down – the cable car or a 45-minute to 1-hour walk up very high uneven steps. We chose to ride up to begin to watch sunset, then head down and catch the full sunset before we reached bottom.

The panoramic views from the top were amazing, especially to watch the shadows lengthen on the mountainside. 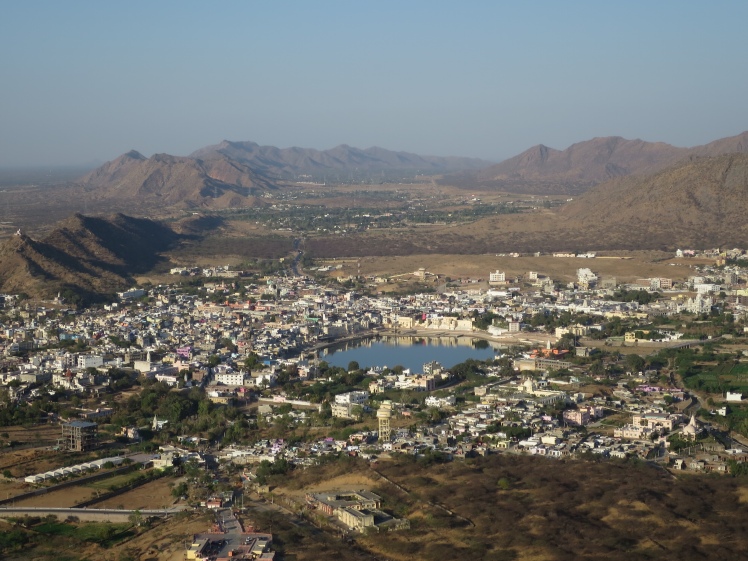 We watched a young photographer chase down a number of tourists for photos. He  did snag a few shots, including this family. 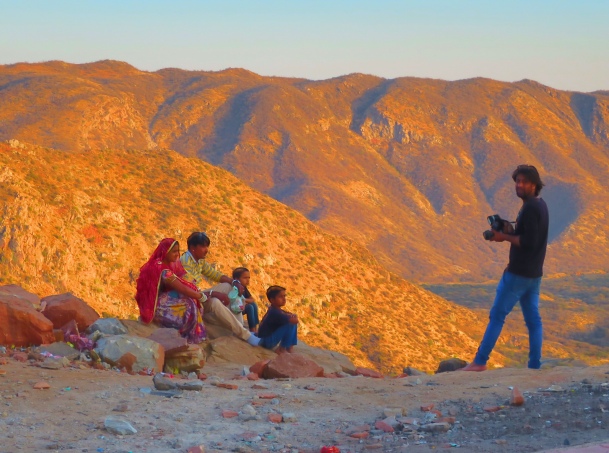 We were kept company by dozens of black-faced monkeys, who according to everyone we speak to, are the “good” monkeys. They will approach if you are offering food, but otherwise are not aggressive. The red-faced macaques are trouble – they’ll jump on you, grab your glasses, bite and scratch if provoked.

We had the chance to really observe them – they are tender with their babies, they groom one another and except for a couple of squawks, seem to get along. 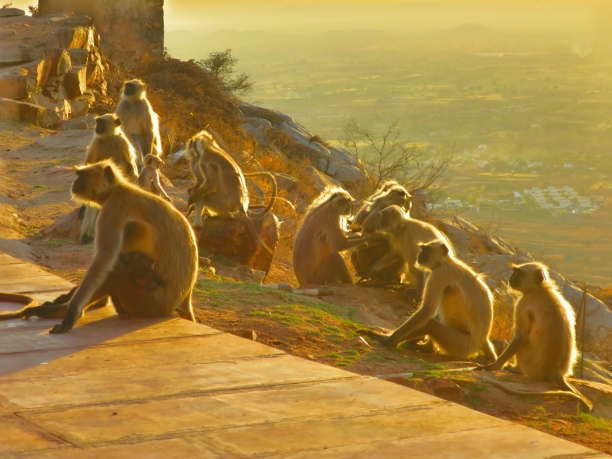 Our photographer friend was demonstrating to his customers how to feed the monkey out of his hand; the little boy did not look convinced. 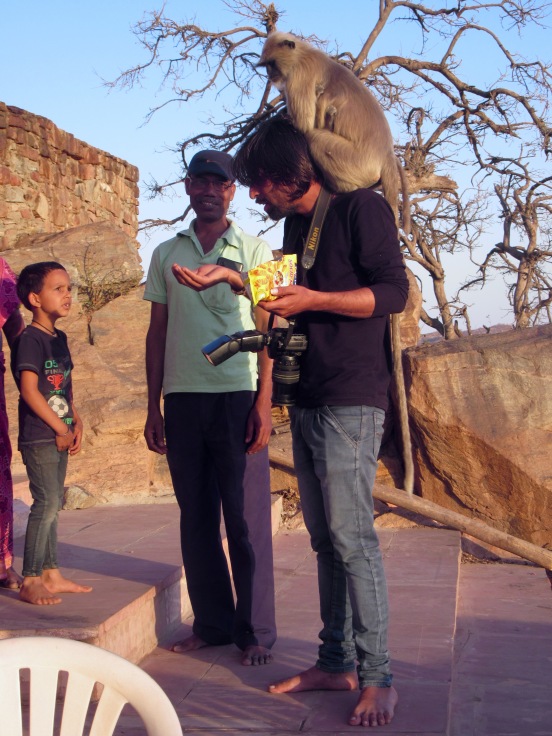 As we made our way down the steps, we met a donkey train on the way up. The first two were labouring under the weight of dozens of water bottles. The last one fairly skipped up with his load – potato chips.

These items could easily have been transported up in the cable car, but as is often the case in India this small job creates work for someone. 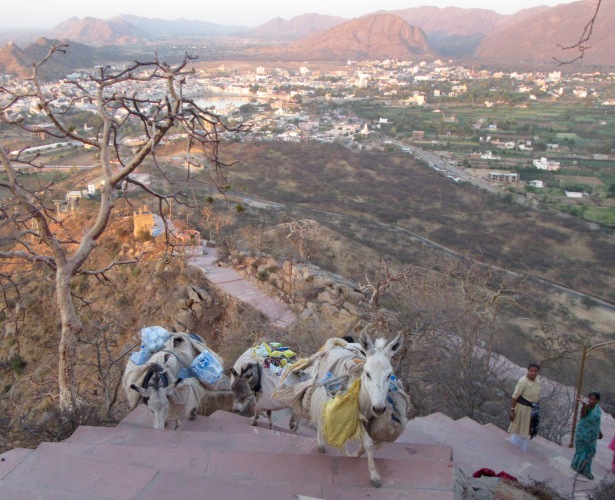 Our reward for the long climb down. 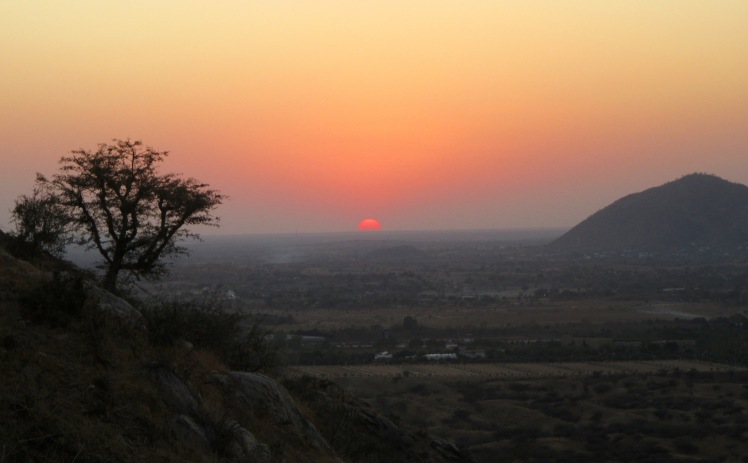 Pushkar came just at the right time – we really enjoyed our stay here, and tomorrow we head south to Udaipur – billed as the most romantic city in India.

10 thoughts on “Tiny Pushkar brings us back”