This will be the third time we have spent Christmas in Mexico – once with Alex, Alanna and Danny, once with Danny and this time just the two of us. Christmas in any warm tourist destination feels strangely disorienting – the Santa trappings seem so out of place. In Loreto’s pretty plaza, a sleigh with reindeer is patiently parked and ready for the big day. 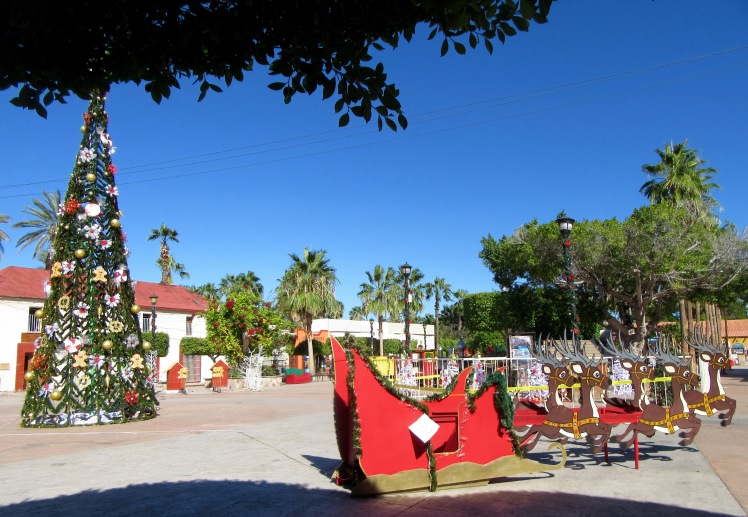 I have no idea why, but Christmas has always been a difficult time for me. I’ve never figured out a temperate, calm approach to the season – taking the best and ignoring the rest.  Each year, the conflicted emotions build up and by the end of a month-long onslaught of canned carols, too much alcohol and false cheer, I’m spent.  I don’t feel fortunate for what I have, I feel deep sadness for those who have so little, or who have recently lost a loved one. There are tears.

Christmas in another country is a way to avoid all that. Mind you, the local supermarket offers just enough Christmassy choices to make me laugh. Ferrero-Rocher chocolates, frozen turkeys left out on the grocery counter to partially thaw and 3-for-the-price-of-2 wine have been brought in for the gringos. We watched our neighbours hauling in bags full of Pacifico beer (“last year they ran out” ), and we’ve already hit up the ATM twice for the same reason.

We’re in Loreto for two weeks over the holidays and it feels exceptionally good to stay put for a while. We had reserved in a different campground on the outskirts of town, but when we arrived there, we felt quite crestfallen to discover a bald parking lot looking out over a rocky beach. After a quick online search, we found Rivera del Mar; right in town and charmingly quirky. We love the Personal Attention. 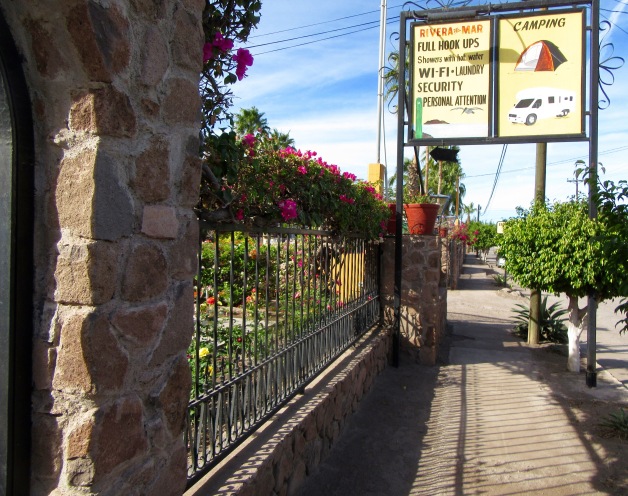 Although the camping spots are right beside one another, it does not feel as crowded as it looks. Each vehicle is configured the same way to access water and electricity hookups, so in effect we have our backs to one another. This campground is lushly landscaped with a common area to meet other campers, which gives everyone a good balance of privacy and sociability.

Here we are, all settled in beside a huge truck camper. The gentleman who owns this was travelling with another friend with an equally big truck.  They have both been coming to Baja since 1969 and currently travel off-road and into mountain villages as much as they can. We have met many people like them – Baja attracts the adventurers. 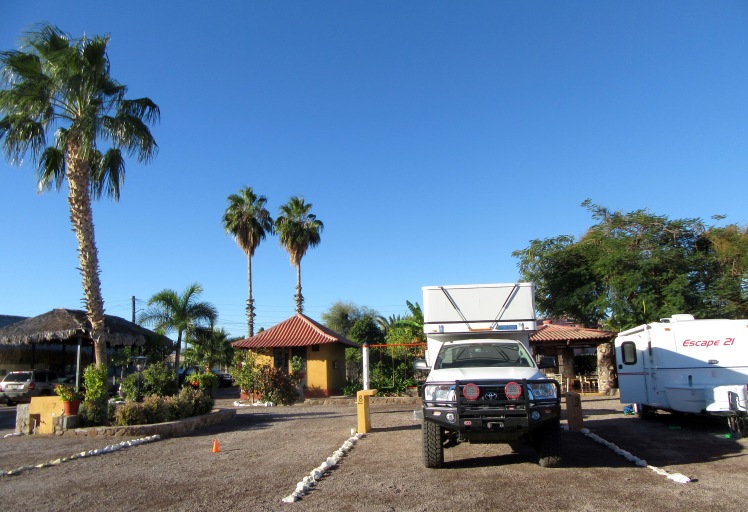 The town of Loreto is picturesque and relaxing – just built for evening strolls around the plaza, or windblown walks on the waterfront. 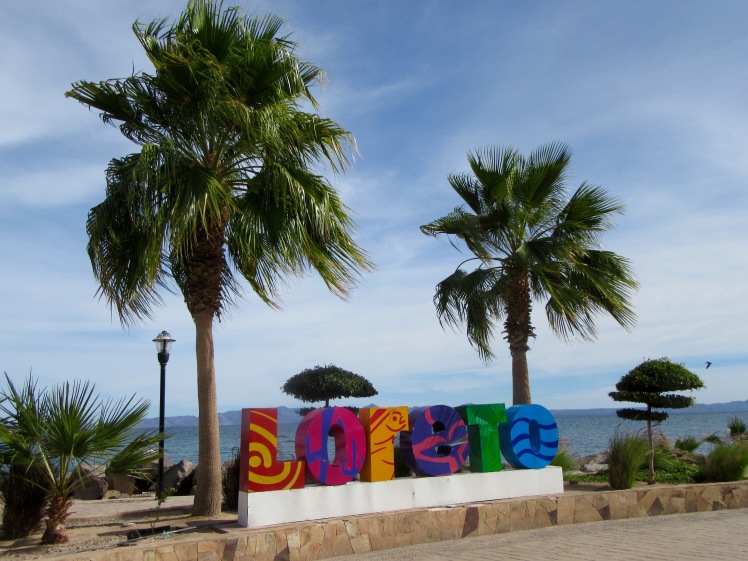 The historical centre revolves around a plaza, which is ringed with outdoor restaurants, shops and the main municipal buildings.

This area is considered to have had the oldest indigenous settlement on the Baja peninsula. In 1697 the Mision Nuestra Señora de Loretta was established here by the Jesuit missionaries and the centre built up around that. Just down the road from the Mision is Posada de las Flores, one of the many attractive small hotels in the town.

Shops range from stands selling T-shirts and trinkets to a few higher-end stores. Interestingly, since shopping is not a big feature of Loreto, the merchants are low-key and allow you to browse in peace.

What would a Mexican plaza be without the snack carts? 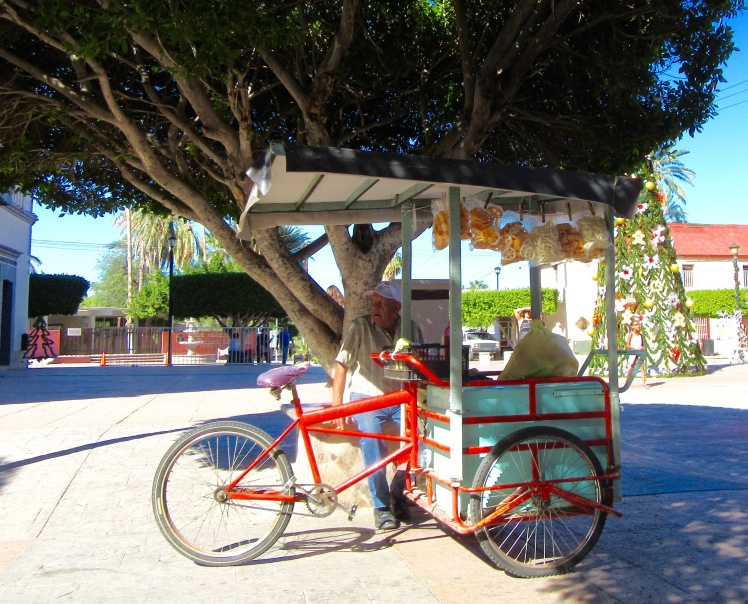 When it is time to eat something more substantial that a bag of Cheezies, there are several good restaurants to choose from. Most restaurants are open-air, with patios and of course birds have free rein to fly in and out.
Strangely, this one cafe was absolutely swarmed with sparrows. They were not so bold as to land on a table while people were still sitting there, but the minute they left the clean-up crew moved in. We’ve never seen anything like it. Germaphobes would not last in Mexico.

The Polizia Turistico are a presence downtown. I stopped to ask Officer Gloria about her job, and she told me her role is to “give touristic advice, solve problems, and offer security.” The force must be doing a good job – Loreto is about as mellow as it gets. She and her colleague offered to pose for a photo.

Fig trees have been pruned and shaped to create an arbour over a couple of the streets. Although they are lined with benches, one thing is noticeably missing. On all of our trips to Mexico in the past, we were quite amused by the legions of amorous teenagers who would sit entwined, kissing, gazing into each others eyes. With no private place at home, the streets became their little love nests. We called them “the bunnies.” There has been no evidence of any of that in Baja so far. Maybe they are all out kayaking. 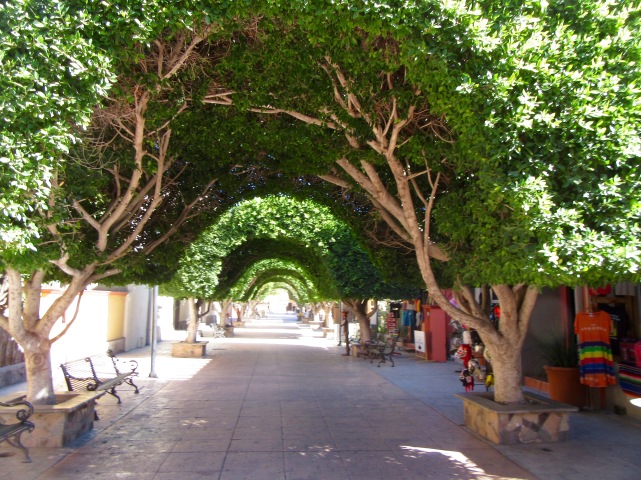 Speaking of kayaking, if we have one piece of advice for anyone coming to Baja, it would be to BYOT (Bring Your Own Toys). So much of the Sea of Cortez is water sports paradise, and the Parque Nacional Bahia de Loreto offers world-class diving, snorkelling and paddling.  We will go out on a boat next week to snorkel and tour around the islands, but not having our own gear is limiting and becomes expensive to have to rent often inferior gear.  At least half the people we met have surfboards, paddleboards, kayaks, inflatables and bicycles with them – that really is the whole point of Baja. Now we know for the next time.

Another challenge being in Baja in December and January are the northerly winds – it keeps the water choppy and the winds are cool. If you come in February and March, you will see blue whales and grey whales, and be able to paddle and swim in more tranquil, warmer waters.

This is how the water looks most of the time in Loreto, in December.

We shivered as we walked along the deserted beach, every palapa empty and blowing in the wind.

We strolled out onto the wharf to watch dozens of pelicans diving headfirst into the water to catch fish. They all came up empty, but didn’t give up.

We had a wonderful day travelling to the Mision San Fransisco Javier, which was about 45 minutes into the mountains on a stunningly well-paved road. That stone wall was meticulously built by hand – we passed one area where a group of men were carefully constructing another wall. 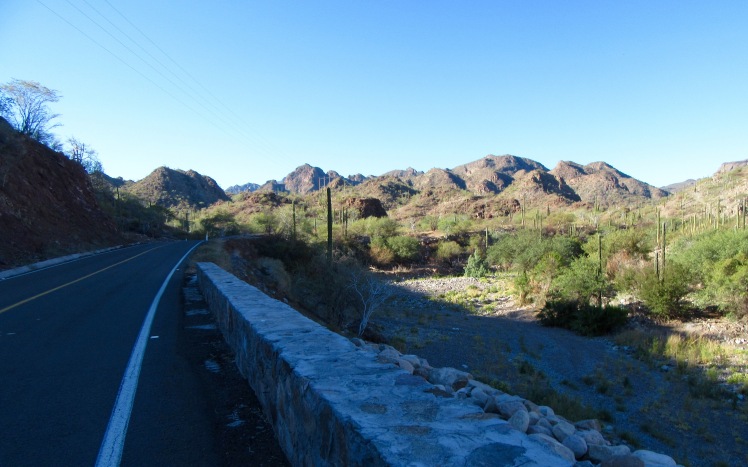 There are a number of arroyos along the way (low areas where water passes over in the rainy season). We did drive through just one arroyo, with about three or four inches of water.

This small settlement was founded in 1697 by the Jesuits, and although they planted fruit and olive trees, and set up a series of canals, the area was too harsh to sustain agriculture. Their mission was set up to convert the Cochimi Indians, who were nomadic hunter-gatherers to become farmers, but unfortunately, they succumbed to the European diseases of smallpox and measles and that population became extinct.

The mission has been abandoned since the 1800s, but is now maintained by Mexico’s Institute of Anthropology and History and is still in use.

The 300-year-old olive tree, just behind the mission. 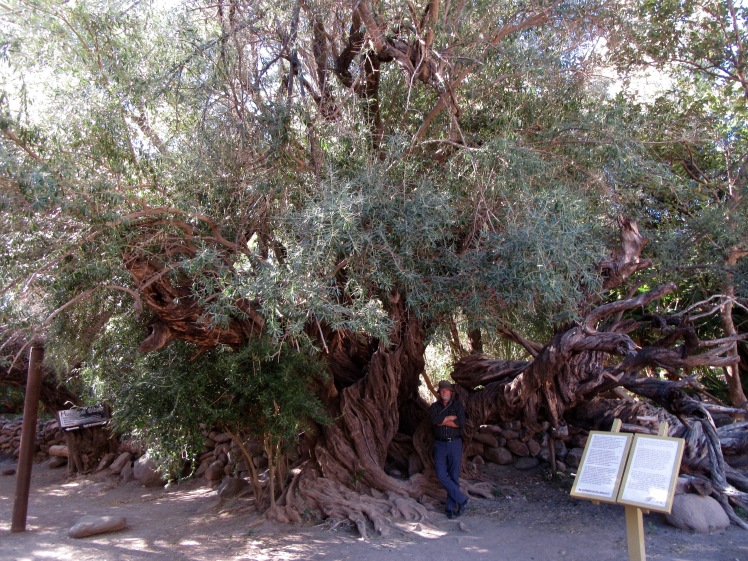 The small village, with just over 100 residents. 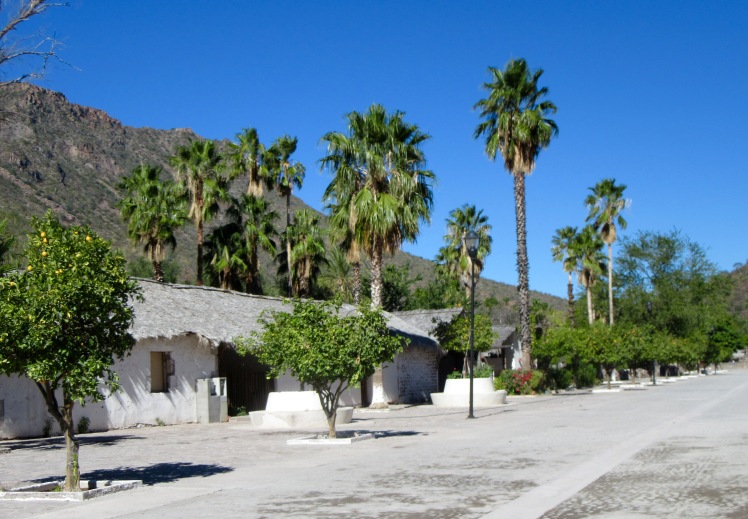 We stopped for lunch at this restaurant, and had a hugely entertaining chat with a group of eight Mexican/Americans who live in Riverside, CA. One of the gregarious women in the group told us she married into a family of four brothers who “go everywhere together”. When I asked how that worked with the wives,  she gave a sly wink – “we’re all family”. 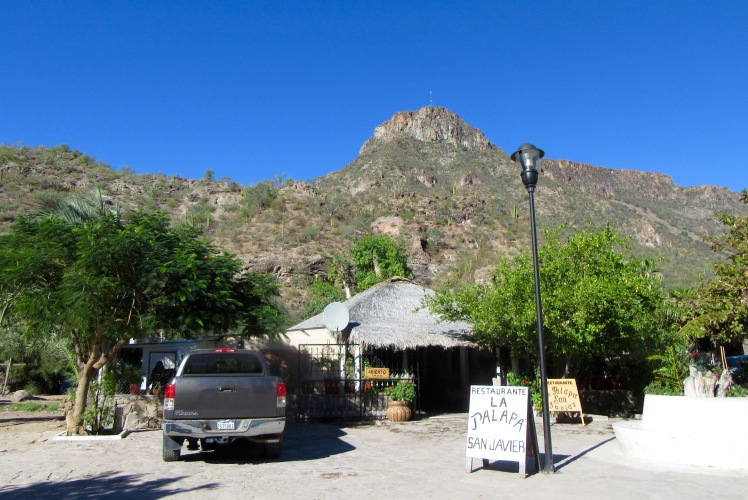 She knew a lot about this village and its history and pointed out a photo on the wall. “That is Mama Lola. She was 118 years old in that photo – she lived to 125.”  Never having seen a person that old before, I guess she looks as well as can be expected, but we wondered if there was something in the pure mountain air to keep her going for so long.

Not to be outdone, one of the brothers pointed to another photo of Pancho Villa, and told us two of the village’s residents had joined his revolution.

Back to present-day, we finished our trip with a chat with Tom from Quebec City who was making his way through the Baja Divide – a 1700 off-pavement bike trip that runs from Tijuana to La Paz. He described the gruelling journey in colourful language, but undeterred, once back in Tecate, will ship this bike home, and drive back into Baja with his mountain bike, “I hear there are great mountain biking trails here.”

I tried to keep this short, but see I am at the same word count – I must be programmed to talk for a certain length of time.

We wish you all a very Merry Christmas – hope you enjoy good food, great music and the company of family and friends.

15 thoughts on “Feliz Navidad from Loreto”