Our time in Loreto is almost over – we leave tomorrow morning to begin our trek south to the more populated and touristy areas of Baja, and we’re curious to see it all – the “real Mexico” of La Paz, the charming, artsy Todos Santos, the wild winds of Los Barrilles and the pricey, over-hyped glitz of Cabo. All of these are pithy summaries of each place and our expectations may fall far short, or exceed the reality.

That has been the case with Loreto. It is a sweet little town with a few good restaurants and a beautiful malecon and beach, but it did not come close to what we had imagined, based on what we had read and on our experiences in beach towns in mainland Mexico. We pictured ourselves walking the malecon at night, surrounded by Mexican families and tourists, serenaded by mariachi bands and chased down by vendors. We imagined the town to be busier and somehow more. We thought there would be packed restaurants, many more shops and sidewalk vendors and more tourists. More Mexicans on the beach, with their families and coolers and music. Even at Christmas, Loreto felt half-empty, and we wondered why. 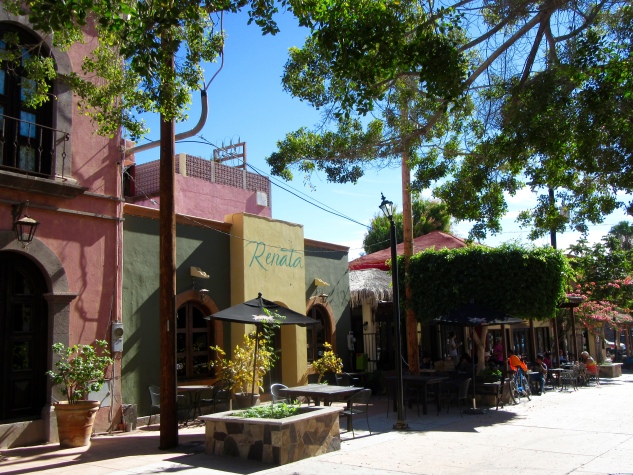 From what we have seen so far, I think the best experiences in Baja fall into two camps – those with kayaks and surfboards and bikes; and the snowbirds with big rigs who camp in one spot for months. For the former, Baja is an unparalleled playground – crystal clear waters to paddle, fantastic snorkelling and windy beaches that attract surfers, windsurfers and kiteboarders from all over.

For the snowbirds, campgrounds become their second home; many have been coming here for years and this is simply a warmer version of their northern homes. They meet up with the same people from one year to the next and circle their wagons each day at 3:00 pm for happy hour.

We don’t fall into either group and found ourselves becoming a wee bit bored. Now, having said all that – we still enjoyed ourselves here very much. Loretta is worth a stop, maybe not for 10 days.

As in the rest of Mexico, there are many animals on the street and it’s not always clear if they have owners or have banded together for company and survival. These little characters draped themselves on top of what appears to be an ad for a cat-themed event.

Returning from the beach one day, we noticed three young Mexican peering over the fence of a home near our campground.  We stopped to see what they were so interested in.  We have no idea how this tortoise got here and if this is its home, but the lot was fully fenced, and after a while, a dog began barking at us rather protectively. 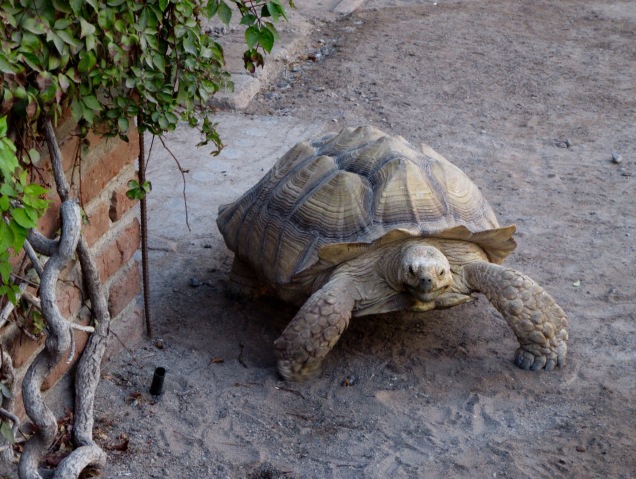 Mexico would not be complete without  people riding horses along the beach. 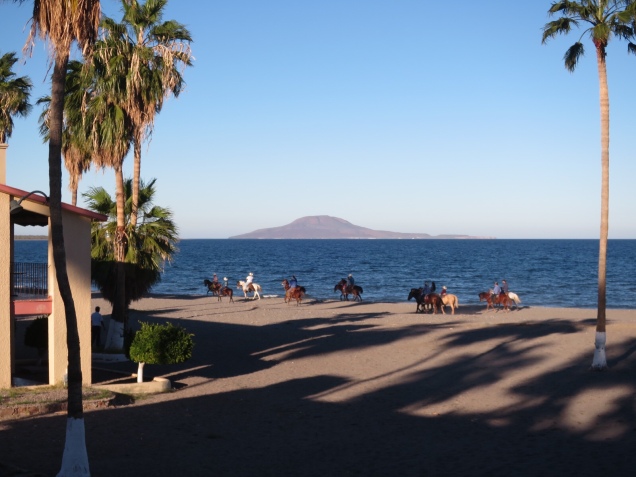 The Centro Historico of Loreto is small but picturesque and anchored at one end by the Mision. 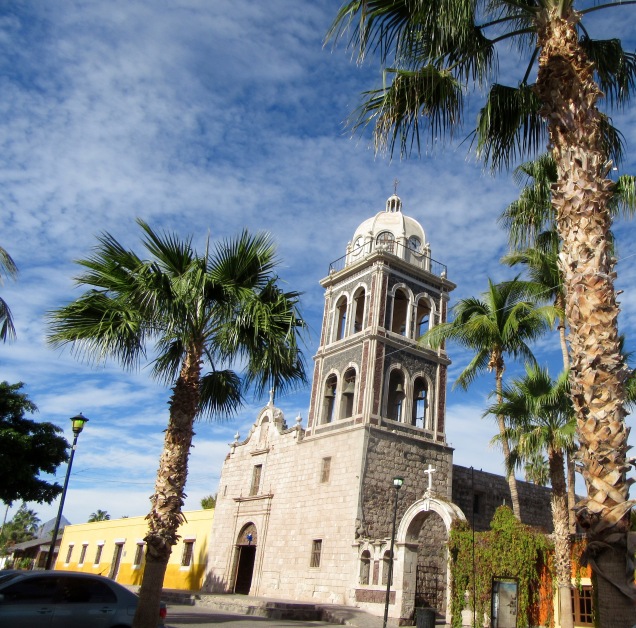 There are a number of cute storefronts and as is always the case in Mexico – so much colour. 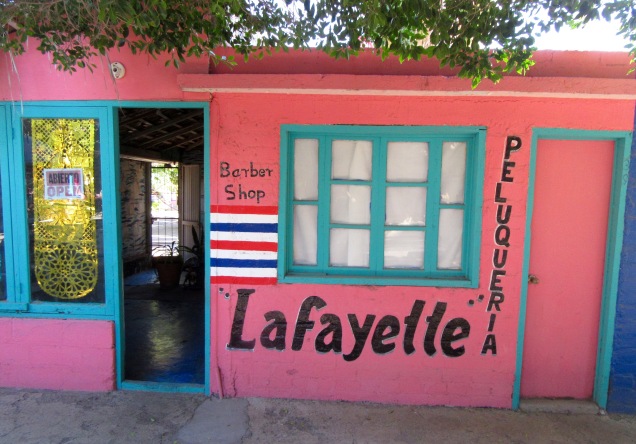 Loreto has a number of old wooden structures that have a bit of a Caribbean feel to them – weathered wood, multi-paned windows and thatched roofs. 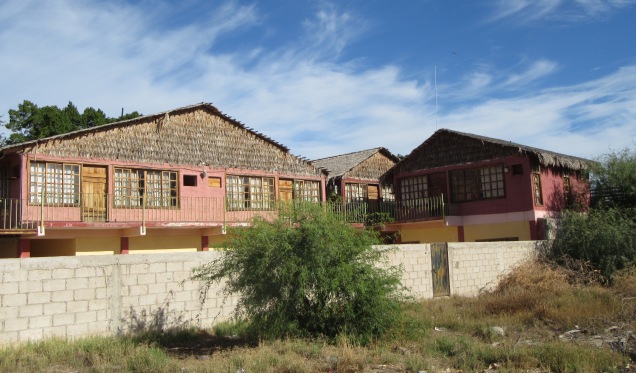 There are also a good number of really extravagant beachfront homes – largely owned by Americans. 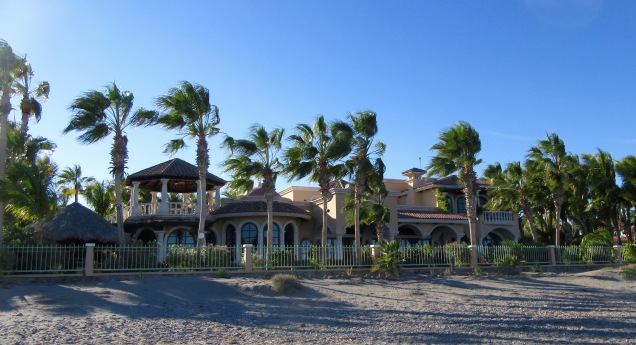 Our campground is one block from the beach and between us and the beach is the Desert Inn Hotel, which appeared to be entirely empty for most of our stay. It was perplexing to us, as we saw people working on the grounds and cleaning the pool.  We cut through the grounds to get to the beach each day without being stopped, so we figured it was under renovation.  Then we met a couple from British Columbia who were staying there and  confirmed that indeed they had been the only guests for a while and were slowly being joined by other people.

The beachfront was beautiful, but very windy most days. We brought down chairs and books and it will come as no surprise to those of you who know our swimming habits – Stephen went in every day and I did not. I’m saving myself.

Beachwalks were always interesting – many, many dogs to greet and people to talk to. One day we watched fishermen cast nets, another day we came upon this curiosity – we think it was a pufferfish. 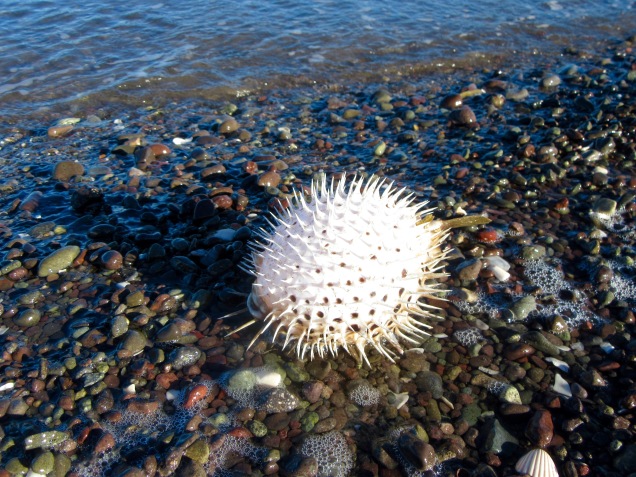 One day we drove south down the coast a bit to check out the Loreto Bay Golf Course and Spa. This is a vast complex begun in the late 90s that includes an 18-hole golf course, spa, wine cellar, restaurants, shops and a really pretty, colourful village of homes and immaculate gardens – owned by Mexican billionaire Carlos Slim. 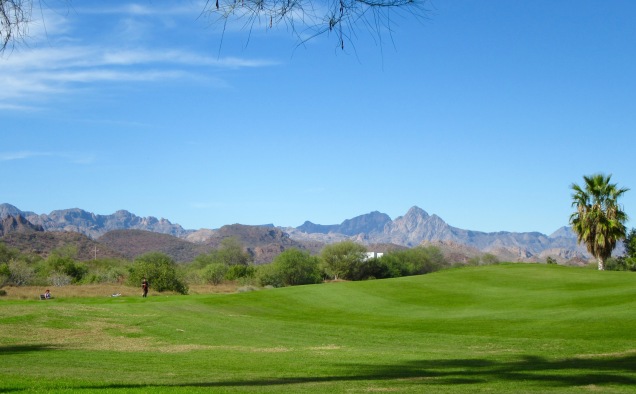 Wide, winding streets curve around the complex; we parked and walked into the village which is pedestrian traffic only. Three-storey homes hug narrow pathways; each home individual and really beautiful. 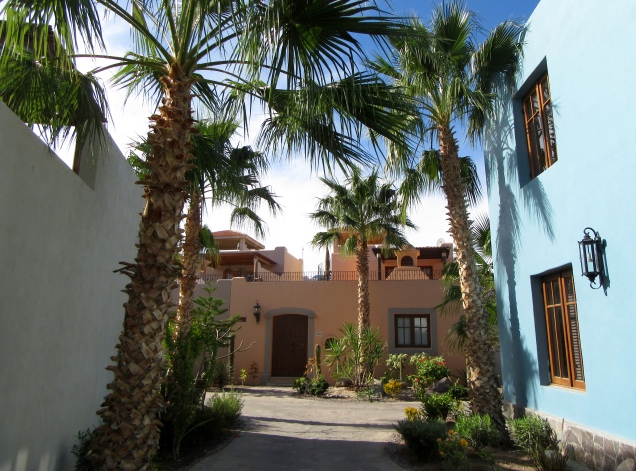 The landscaping is fantastic; no chance this gardening has been left to random black thumbs – it is uniformly well cared for and lush. 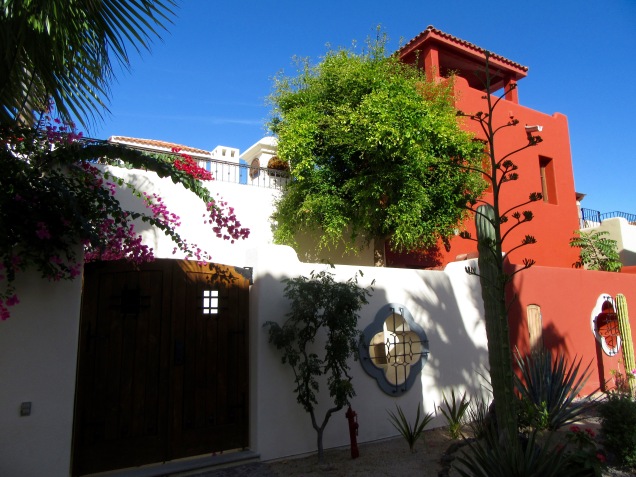 We walked through to the beach, which ran along a sheltered cove. 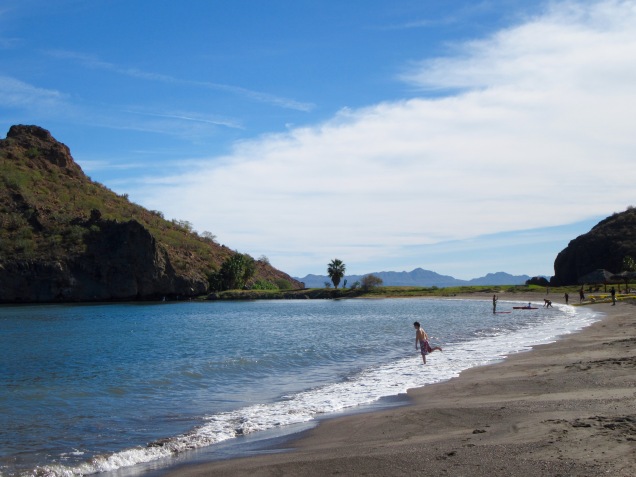 It is an idyllic setting, but a couple of things happened that gave us pause. As we were parking our truck, two young men rode by on their bikes and we overheard one say to the other, “I really like being in a gringo village.” A shocking statement coming from a young man in his 30s who should be more curious, more willing to learn.   And therein lies the reality for a number of tourists coming to Mexico – that need to experience the luxuries and comforts and safety of home, while staying separate from Mexicans. They would have flown in, been driven to this resort and experienced a lovely vacation in the sun – really nice accommodations, beautiful beach, golf, snorkelling, paddle-boarding, perhaps a couple of planned excursions. Sheesh – I don’t begrudge anyone a nice holiday, but that sentiment of wanting to be in a foreign country without experiencing it is disturbing.

And then, we had a brief conversation with a man who was just walking out his front door. We commented to him about the beauty of the homes and landscaping and he agreed with us. Then he turned to Stephen, smiled and said, “by the way, thank you for your service”. 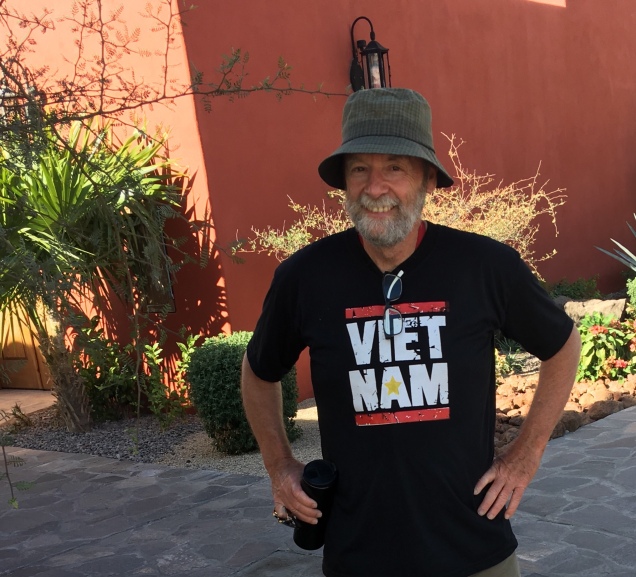 What?!?  I explained we were Canadians and had bought the shirt while visiting Vietnam two years ago. This gentleman was referencing a war that ended over 45 years ago. What were the odds that someone who had actually served in that war would then be wearing a souvenir T-shirt? What a bizarre interaction.

Anyway, after we paid $15 for two small coffees and a danish, we left and headed to the marina at Puerto Escondido.   The scenery unfolded – so beautiful. 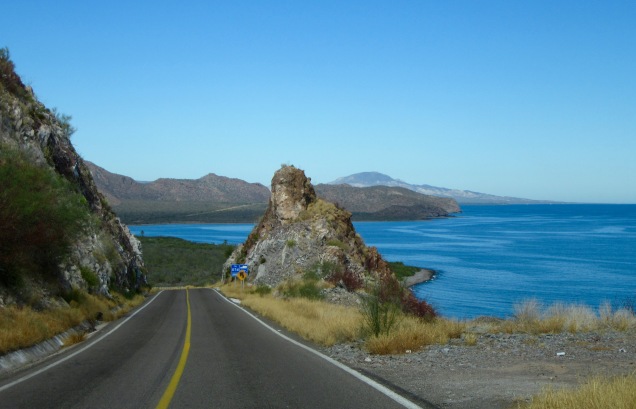 We arrived at the marina to find a massive infrastructure and very few boats (where is everybody?).  But it’s always fun to check out the luxury yachts. 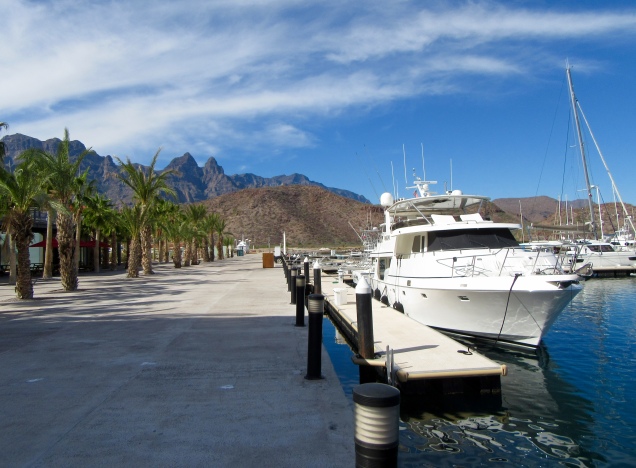 As is always the case when we travel, the best part is the people we meet. We set off three years ago, thinking ourselves to be quite unique. We had sold our home! Most of our stuff! We were unhoused!  Well, that was hardly an original thought – we are meeting many people who have taken to the road and don’t know when they’re heading “home” again. We meet people our age, but we have also met many younger people – people in their 30s and 40s who have given up well-paid careers to regroup and figure out their priorities. There was a family from New Zealand, travelling with their two young daughters, who just packed it in, sold their home, bought a motorhome and are travelling North America for an extended period. We will likely meet up with them again as we travel south.

Then there was this trio – Pascale (originally from South Africa), with her Canadian partner Johnny (they live in Winnipeg when they’re not cycling), and their friend Flo, (from France – he has been cycling for 8 months). They stayed for three nights in Loreto for the basics ( showers, laundry, groceries) and in Johnny’s case, the hopes of having his tire repaired. The universe unfolded as it does in Mexico, and Pepe showed up – bike mechanic extraordinaire. High energy, perfect English and a deft hand with bikes and voila: 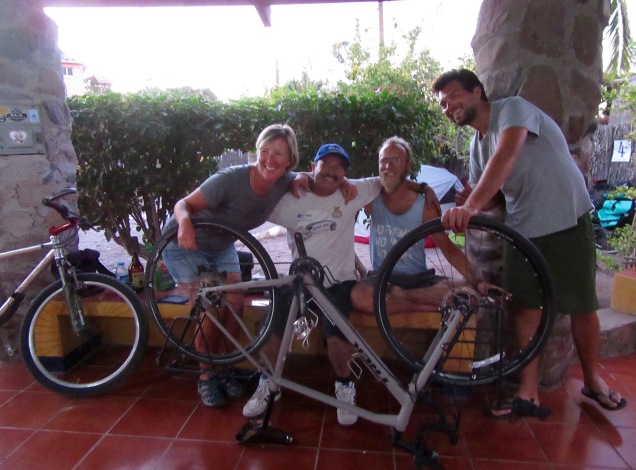 These are the people, the stories and the experiences that keep us so addicted to this lifestyle.  See you again in a few days.

10 thoughts on “Sorting out Loreto”