There are numerous tourist sites within an hour’s drive of Bisbee; all of them uniquely fascinating.

We began with Tombstone; a small town that has developed into a walloping tourist destination by  capitalizing on the infamous Shootout at the OK Corral.  This gunfight took place on October 26, 1881; a showdown over control of Tombstone between the “good guys”  –  The Earp Brothers and Doc Holliday and the “bad guys”  – the Clantons and the McLaurys. When the dust settled, and the dead and wounded were accounted for, only Wyatt Earp walked away unscathed.

The re-enactment of this infamous duel is held three times a day and yes, it is hokey, but still lots of fun.

The crowd was warmed up by an actor who instructed us to  clap for the good guys and boo the bad guys. And then the fun began. Good guys entered – yay!

Followed by the bad guys – boo! 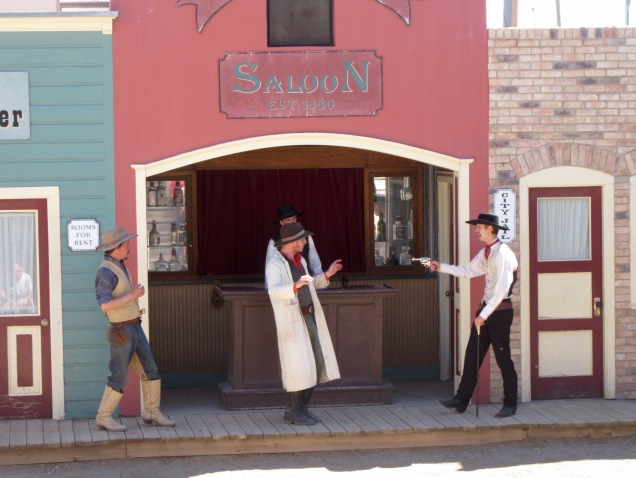 After much posturing and yelling, the gunfight broke out. 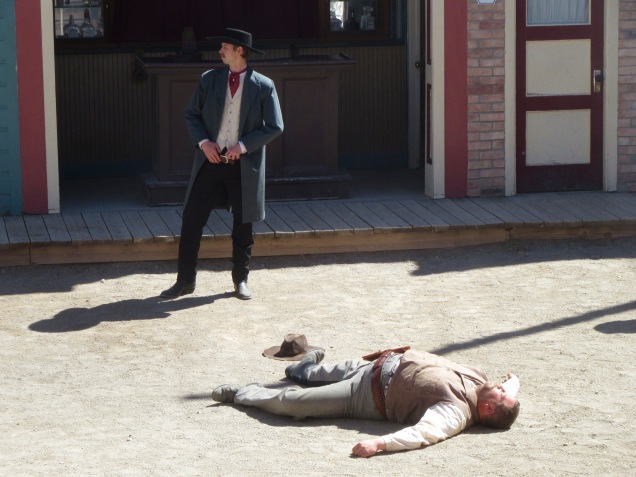 After the show, we were encouraged to have photo ops with the actors. Since the lineup for the bad guys was far shorter than for Doc Holliday and Wyatt Earp, I chose the latter, including the actor who had miraculously risen from the dead.

We were told at the Visitor Centre that there are more actors per capita in Tombstone than in L.A. With a 2019 census of 1, 380, that may well be true. The town is crawling with emoting thespians in period costume – prostitutes, gunslingers and stagecoach drivers.
This stagecoach is a replica:

This stagecoach is one of the originals – less spacious and comfortable, but still road-worthy and drawn by burros. 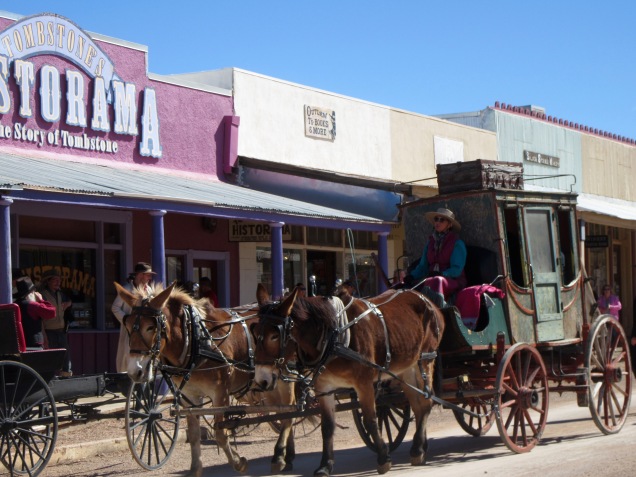 The main street of Tombstone is lined with shops selling cowboy boots, gaucho pants and all manner of western gear. The selection of saloons/restaurants offers interchangeable and mainly mediocre menus of beef and starch – tourists aren’t here for the food.

Off the main street are a number of pretty residential streets and elegant municipal buildings, including the court house. 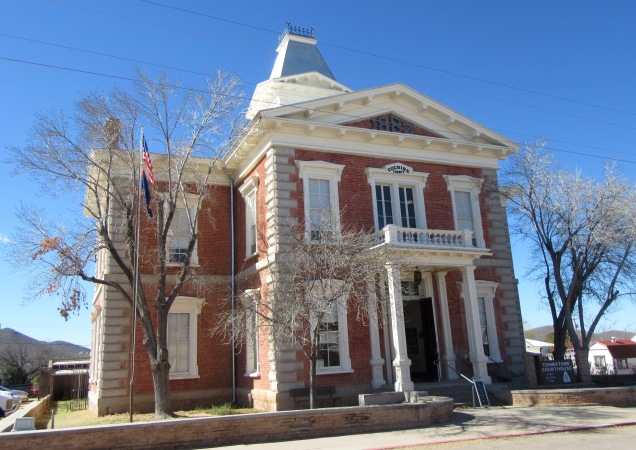 Tourism has revived this town and pumped up lots of peripheral businesses. We passed by this saloon that was populated by present-day characters who could well have been out of Central Casting.

Aging Outlaw Biker with impressive mutton-chops and nothing to prove.
Barbecue King who just smoked 30 pounds of ribs and enjoys his own cooking. 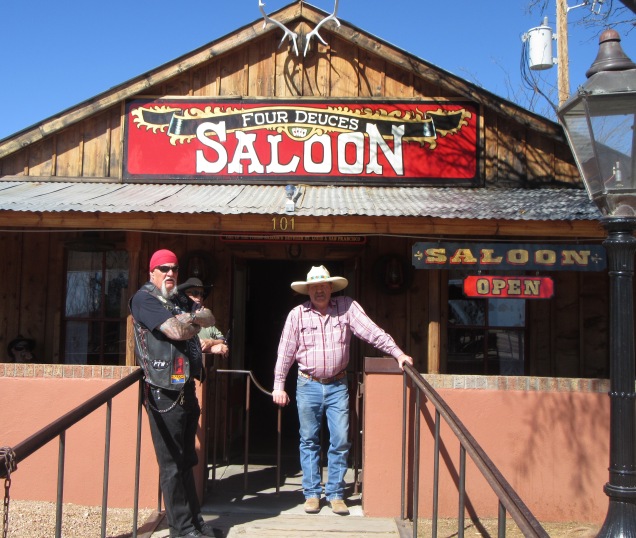 All in all, a fun day in the Wild West.

On to the impressive sight of 20,000 migrating sandhill cranes. We would not have known about this phenomenon but for a fellow camper. This is where travelling without a (firm) plan works well. Our new friend Jan insisted we find our way to Whitewater Draw  Wildlife Area to have an up-close-and-personal encounter with sandhill cranes that have flown south from Siberia and Alaska for the winter.  Ideally, one would rise before dawn to watch  tens of thousands of birds rise from the shallow waters to fly north to Willcox (about 60 miles away) to feed. The sight and sounds of these birds flying en masse is a memorable one, but…we slept in.

We arrived at Whitewater Draw at about 11:00 a.m. – plenty of time to set ourselves up and watch the cranes as they returned again. We were part of a festive atmosphere as fellow birders joined our group, and then…the first few groups appeared on the horizon – squawking pterodactyls with charcoal wingspan and spindly extended legs.

As more and more  cranes arrived and as they swooped and soared before landing, we wondered how they avoided calamitous mid-air crashes. These birds are about 3 feet tall, and weigh between seven and eleven pounds. At times, there were hundreds of birds in the air.

Sandhill cranes have a distinctive appearance – downy grey feathers and a tuft of red around their eyes. 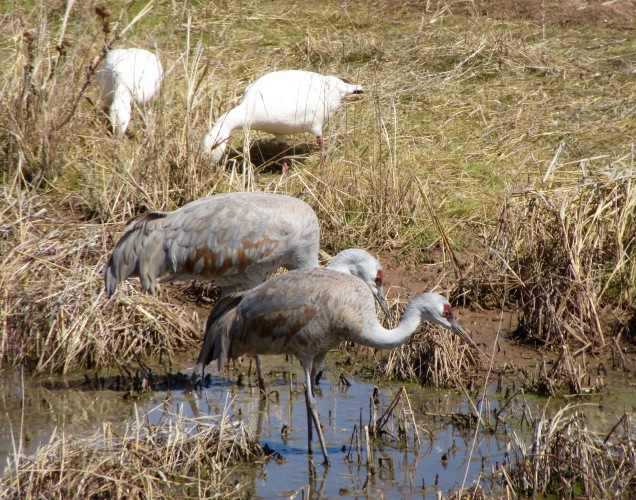 Snow geese are another species of migratory bird that can be found in this marsh and they seem to co-exist with the cranes very peacefully. 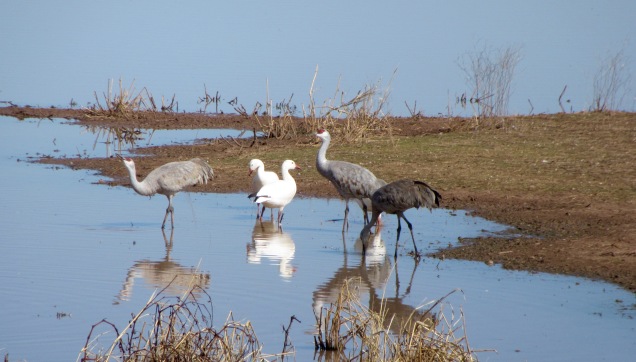 One reason why this area has become such an important migratory stop is the vast marsh. The birds spend the night in the water, to evade predators like coyotes. They fly to a nearby area each morning, which provides reliable feed in the harvested grain fields.

As thrilling as this experience was, it was another opportunity missed.  If we were serious birders and had binoculars, we would have picked off several other species, including pintails, quail, teals, heron, ibis, hawks, shorebirds, flycatchers and blackbirds.

We did see this handsome Big-Horned Owl in the barn by the parking lot. He was positioned on one end of the barn,  keeping a very watchful gaze on his partner on the other end, her ears barely visible above her nest.

And finally – spelunking. This is an activity I cannot imagine – willfully inserting your body into tiny passages underground and then inching forward, with no idea when or if your body-width tunnel will open up into a  room. You have a head lamp for light – otherwise you are in complete darkness. You may come face to face with rats. You have no guarantee you won’t get stuck in your tunnel. Why would you do this? 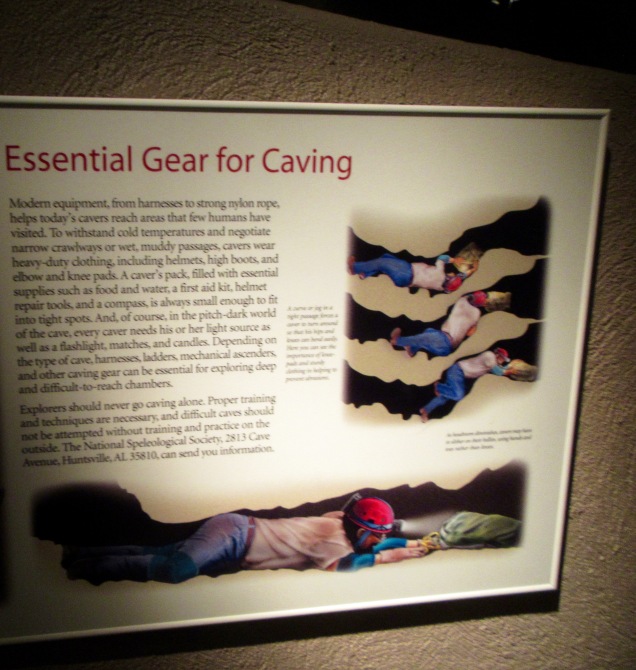 In November 1974, 19-year-old Gary Tenens and 20-year-old Randy Tufts discovered an “exhale”  (gas) through a grapefruit-sized opening in the limestone hills of Whetstone Mountain. The hill to the right is where they made their discovery. 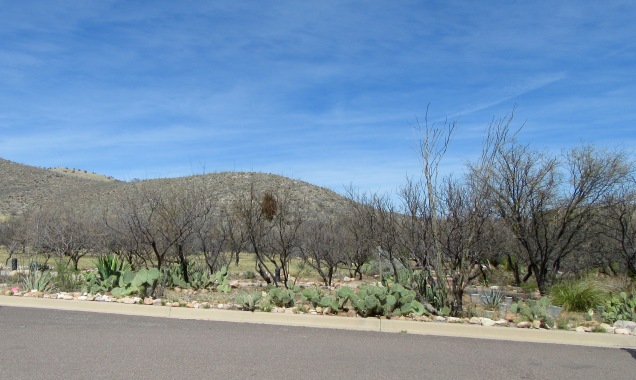 After a couple of explorations into the cave, they finally crawled into what is known today as “The Big Room.” They were so stunned by their discovery they just “sat and giggled.” 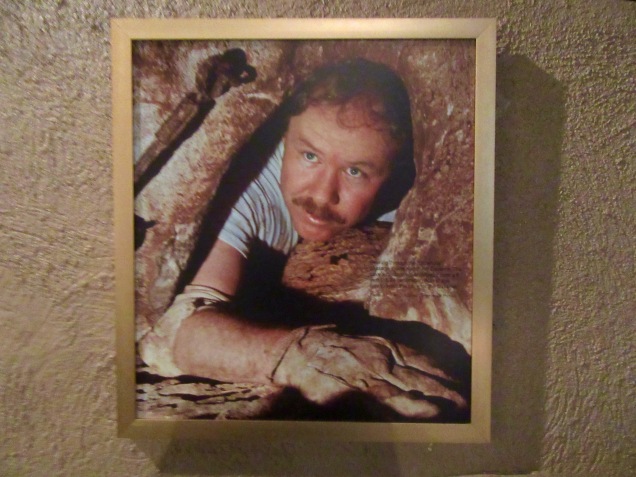 As young as they were, they understood the importance of this living cave and the critical nature of protecting it.

They kept it secret for another four years, as they continued to explore and finally they contacted the property owners, James and Lois Kartchner.  Everything conspired to work in their (and the cavern’s) favour. The Kartchners were keen to protect the cave and the governor of the day, Bruce Babbit, was a geologist. He pushed for appropriate and protected exploration.

On November 5, 1999, Kartchner Caverns State Park opened to the public. It is carefully managed, with just 500 people allowed in daily. Since we had been in a cave or mine in the past month, Stephen and I had to have our shoes sprayed to guard against White Nose Syndrome, a fungal disease that kills bats.

We were not allowed to bring in bags, phones, devices, cameras, food or drink. Photos were not permitted, as in the past eager tourists had pushed each other for a good photo, and had done damage to the formations.

We were instructed not to touch any of the walls or formations and if we did, to let the guide know. She would mark the area with tape and the cave crew would come by later to disinfect it.

We were warned that the caverns would be humid and hot and after about a half hour (we were in for one hour), both Stephen and I began to feel quite uncomfortable. We did not want to be the ones to have to be evacuated, but we were both very happy to be out and breathing fresh air again.

The caverns are remarkable because of the story of their discovery and the tremendous effort to keep them pristine, but we were underwhelmed by these caverns.  We had been in caverns in Mexico and in Vietnam that were five times the size and and scope and colour of Kartchner  and we came with the wrong expectations. We thought we would be seeing similar formations.

Still, Kartchner is a remarkable cavern, set in a beautiful state park and is well worth a visit.

Weather is turning again – we are heading east for some mountain hiking, but will keep a keen eye on the forecast – snow by Monday or Tuesday!

See you when we have cell service and wifi once again.

8 thoughts on “From shoot-outs to sandhill cranes to spelunking”