Twenty-seven million years ago, eruptions from the Turkey Creek Volcano spewed ash over 3100 sq. km. in this area or the Chiricahua Mountains and created layers of grey rock called rhyolite. Weathering by ice and water erosion enlarged cracks and formed spires and balancing rocks.

The Chiricahua Apache called them “standing up rocks” – a perfectly apt description. 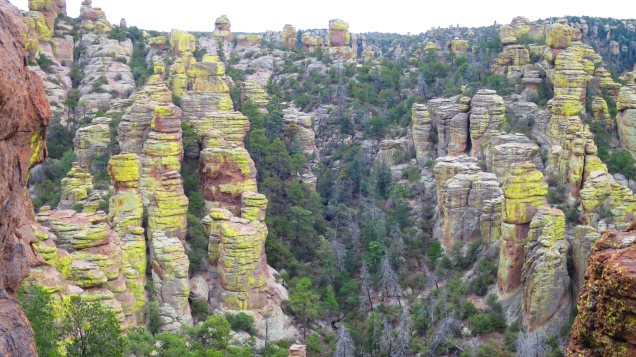 This unique and stunningly beautiful landscape is also the result of four ecosystems meeting – the Sonoran and Chihuahuan Deserts and the Sierra Madre and Rocky Mountains.

What is now called the Chiricahua National Monument was established in 1924 to protect the pinnacles.

We learned about the importance of the CCC in the creation and early preservation of many of the U.S.’s National Parks, including Chiricahua. 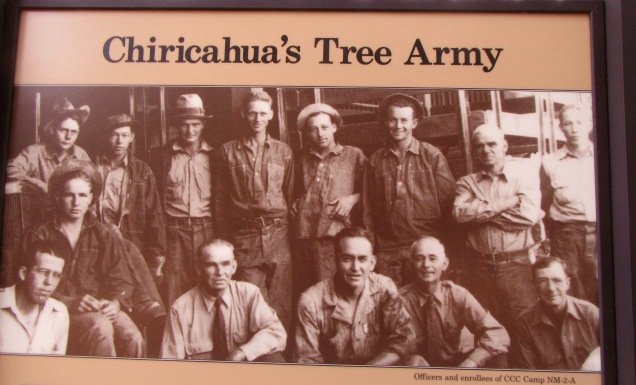 As part of Roosevelt’s New Deal, the Civilian Conservation Corps (CCC) was launched in 1933 and enlisted 3.4 million young men who were out of work and hit hard by The Great Depression. The CCC also offered classroom instruction for those who could not read or write. They were taught carpentry, plumbing and other important skills. They were housed, fed and given clothing, and were paid $30 a month, $25 of which was sent to their families. The CCC was disbanded with the outbreak of World War II, which sent the workers into military service.

One young man said, “you cannot express in words how much the Three C’s meant to a bunch of boys out of work and with no jobs. To me, I will always have wonderful thoughts and memories.” 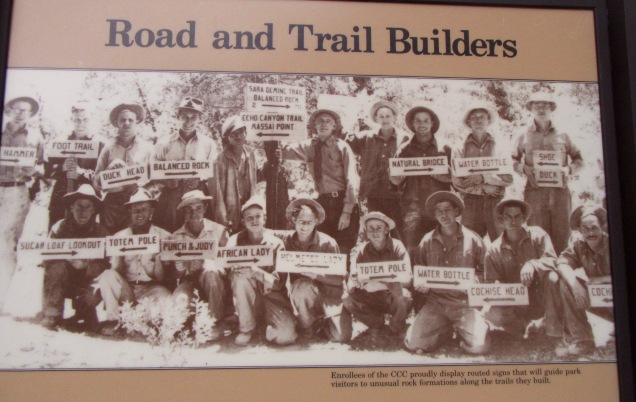 We had the great fortune of running into a park ranger on one of our hikes. She could have had a pleasant chat with us and continued on her way, but to our delight, she  walked alongside us for a number of miles. We picked up a couple of other hikers along the way who were also very interested in her ongoing interpretation. How lucky for us – we had no idea of what we were seeing; how often do you get your very own Park Ranger along on a hike?

Our new friend Helen, who was out hiking on her day off. How many people do you know who go into the office on their free time – for fun?

Helen is passionate about her life’s work, but ongoing funding challenges have slashed ranger jobs for years. She and her husband have worked at parks all over the country; moving about as suitable positions became available.

It made me think about the contrast between the  CCC in the ’30s and the current state of the Parks system in both Canada and the U.S.  For so many years now, funding has been  an issue, and yet attendance and interest in our parks is at an all-time high.

We love our parks and we want them to be available for our grandchildren. We want to continue to book our campsites and go on hikes and attend interpretive talks. It seems only fair that we hire enough rangers and then compensate them with well-paid secure employment.

So…back to our hike with Helen. As we walked, she pointed out so many things. “Listen to that call – I love it – the canyon wren – they sound like they’re laughing.”   Now I know – I’ve heard the canyon wren a couple of times since then.

We began to notice evidence of a forest fire, and Helen told us it happened in 2011 – they believe it was human caused, possibly migrants who had built a fire for warmth and did not put it out properly.

She told us about the importance of stemming the growth of invasive plants and how they upset the ecosystem – one of the many duties park rangers do in the course of a day.

Some images from our hike:

A lookout that gave us a glimpse to the snow-capped mountain range just beyond.

One of the many balancing rocks in the area. Helen assured us these giants were not going anywhere. 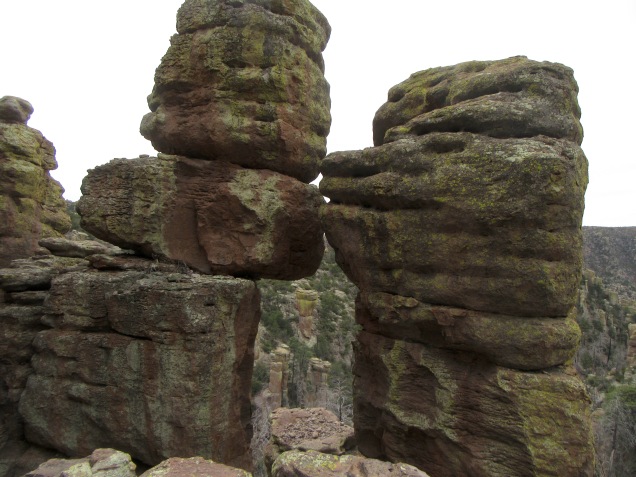 An area of the mountains called “The Grotto”

Just to back up a bit, the Chiricahua National Monument is in the far southeastern corner of Arizona – almost to the New Mexico border.  As we drove toward our campground, the landscape gave little clue as to what lay ahead.

Just outside the turnoff to our campground, we got our first clue:

The Bonita Canyon Campground was beautifully situated, with lots of space between campsites and a number of small trails leading right from the campground. For the first time since we’ve bene camping in Arizona, we were warned about wild animals (bears, mountain lions) and each campsite was equipped with a bear locker.

There are also coatimundi in the area. Nope, we had never heard of them either, but our very chatty little neighbour Olivia had apparently seen a whole family of them while out hiking with her family. They are a member of the raccoon family, or as Helen put it, “what happens when you cross a lemur with an anteater.”

We didn’t see the elusive coatimundi, but this stock photo will give you an idea of what they look like.

What we did see were these delightful birds – the Mexican jay. Unlike their bossy, squawky cousins, these birds are pretty, graceful and relatively quiet. They welcomed us when we arrived; swooping and soaring around the trees and picnic table as we set up. I suspect they have been fed in the past.

A short, but very sweet side trip to a beautiful part of Arizona. We would have stayed longer, but once again had to flee a forecast of snow. At an elevation of 6800 feet in the Chiricahuas, we have been reminded that north, south, east and west in Arizona don’t really guarantee weather – it is the elevation that can turn rain into snow. It is making for an interesting hopscotch across the state.